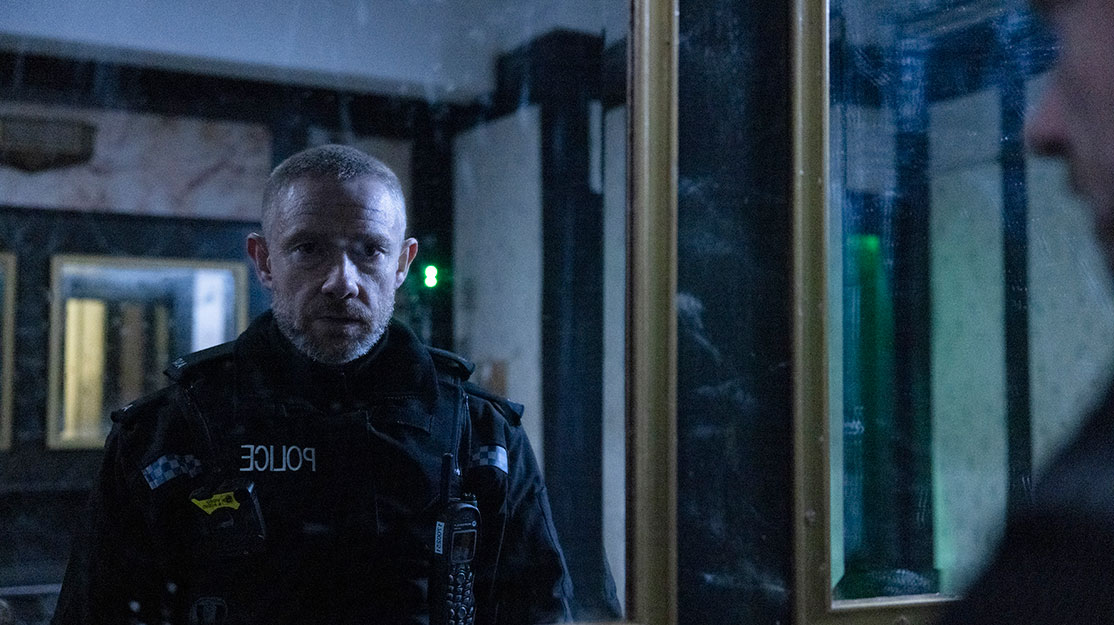 Star Martin Freeman, screenwriter Tony Schumacher and executive producer Laurence Bowen discuss the making of Liverpool-set police drama The Responder, which follows an urgent-response officer over a series of evenings.

When Tony Schumacher envisaged producing his new police drama The Responder, the writer and executive producer didn’t expect to find himself repeating words such as ‘Chicken’ and ‘Pot Noodle’ down the phone to actor Martin Freeman.

While it may sound like Freeman, whose storied career includes roles in The Office, Sherlock and Black Panther, was taking an unorthodox approach to a hunger pang, he was in fact getting to grips with the Liverpudlian accent for his role as PC Chris Carson in the BBC crime drama.

Schumacher, himself a Scouser, chose his home city as the setting for his first screenplay. It’s not the only personal thread running through the story – Schumacher also worked as a police officer, leaving the profession after experiencing burnout and poor mental health. And although The Responder is not an autobiographical project and is instead inspired by Schumacher’s former career, those two issues are explored keenly in the script.

On top of all this, Ray Mullen (Warren Brown), the man who got Chris demoted three years ago, is vying once again to derail his career by trying to prove Chris is a bent copper. Meanwhile, in his personal life, Chris is struggling to save his marriage to Kate (MyAnna Buring) and make time for his daughter.

It wasn’t until four years after leaving the force that Schumacher began to feel he was ready to “revisit that dark place and get something out of it,” having harboured dreams of being a writer since childhood. He began writing novels, including the John Rossett thriller trilogy, before his potential talent as a screenwriter was spotted by acclaimed drama scribe Jimmy McGovern (Time, Hillsborough, Accused).

McGovern selected Schumacher for a bursary scheme for upcoming writers funded by ScreenSkills’ High-end TV Skills Fund and supported by Dancing Ledge. Schumacher was given funding to develop The Responder, while also being mentored by McGovern.

Screenwriting wasn’t too much of a jump from novel writing for Schumacher. “Somebody said to me it’s like being a plumber and then deciding that you’re going to be an electrician on the Monday,” he explains. “But to be honest, I didn’t find it that much different. We’re telling stories and I’m a great believer that anyone could do it.”

It was the script that first attracted Freeman and Dancing Ledge CEO and executive producer Laurence Bowen to the project. “I responded to it because it didn’t feel like it was written by committee,” Freeman says. “It didn’t feel like it was written for anybody else, apart from the person who had written it. And I mean this with no side or snide at all, there was something untutored about it to me.”

Bowen adds: “I’ve read thousands and thousands of scripts, and it was honestly one of the very best scripts I’ve ever read. You can’t really put your finger on [why], but it’s to do with the truth and the authenticity and probably a little bit of a pain in there.”

To get into character as Chris, Freeman started work on perfecting the Liverpudlian accent shortly after reading the script in early 2019. This included the aforementioned phone calls with Schumacher and sessions with the late dialect coach Joan Washington. The first test came during a Zoom call with the rest of the cast, many of whom are from Liverpool. “It was pretty nerve-wracking,” Freeman says. “But it was delightful, as I heard a few people afterwards saying, ‘I didn’t know Martin was originally from Liverpool.’ That was such a relief.”

On set, Freeman says he gets “less chatty for about 20 minutes” to get into character before shooting a dark scene, noting that he isn’t a fan of method acting. “Otherwise, you’ve got 12 people walking around doing method, and it’s just not fun,” he says. “We could all die tomorrow, and that’s not the way I want to go out. It should be enjoyable. The process should be enjoyable.”

Filming for The Responder, which is distributed internationally by Fremantle, took place in locations all over Liverpool during the pandemic, with the help of the Liverpool Film Office. The combination of coronavirus and night shoots was “punishing” for cast and crew, according to Bowen. “But working in Liverpool was brilliant,” he says. “The Liverpool Film Office really enabled us to get access to all the locations we needed, so the experience of making it was both brilliant and painful for those two reasons.”

Schumacher says his favourite scene is one in which Rachel witnesses a bonfire, because he feels it captures the sense of wonderment a new copper occasionally feels on the beat, solving crime and making a difference to people’s lives. “The way that feeling is conveyed in that scene and the way [Adedayo] caught that –I was genuinely moved,” he says.

Adedayo also remembers shooting the scene. “They didn’t tell me how big the fire was going to be, so when I saw it, I was like, ‘Wow, we’re doing a real fire,’’’ she laughs. “[My reaction] was probably a little bit real, to be honest.”

Launching on BBC One and iPlayer on January 24, the first two episodes of The Responder are directed by Tim Mielants (Peaky Blinders, The Terror), while episodes three and four are directed by Fien Troch (Home). Phil Barrantini (Boiling Point) helms the final episode.

Mielants is described as “quirky” by Bowen, who says the Belgian filmmaker brought “fun and playfulness” to the series and was hired on the basis of being a “very visual” director. “There are two ways of capturing Tony’s writing,” Bowen says. “One is the classic naturalistic, socially realistic, kitchen sink kind of approach, and the other is a slightly heightened, slightly authored approach, which still makes it feel truthful but just brings a bit of an aesthetic to it.” Mielants’ style, he adds, is the latter.

The script was also reinforced by a strong cast that, alongside Freeman and Adedayo, includes newcomers Fairn and Finan. Casting director Robert Sterne, who has worked on Game of Thrones and The Crown, spent six months in Liverpool and auditioned countless actors before awarding them the roles.

It is Fairn’s first role on television after graduating from the Guildhall School of Music and Drama last year, while Finan has just a few small roles on shows such as Doctors to his name. “It’s more or less the first thing they’ve done,” Bowen says. “But they’re both going to be huge stars.”

Working with Fairn and Finan “gave me a shot in the arm, because you need young people kicking you up the ass,” Freeman says.

If there’s one thing that audiences shouldn’t mistake The Responder for, it is a polemic on the state of policing. Despite the current climate, and the fact that The Responder looks at corruption in the force, Bowen says the show was not developed or commissioned as a political piece. “It is a response to one writer’s vision of their own life and experience and is really an emotional piece of writing,” he says.