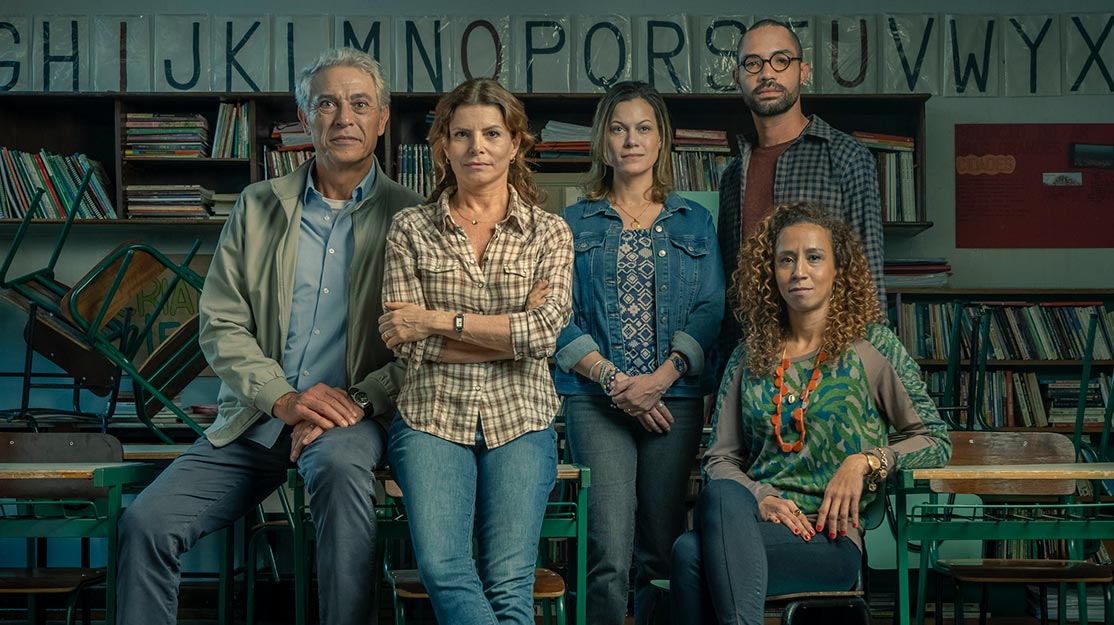 Carla Faour and Julia Spadaccini, the writers behind Brazilian series Segunda Chamada (Second Call), tell DQ why they wanted to shine a light on the country’s adult education system.

After series set in a hospital (Sob Pressão/Under Pressure) and a prison (Carcereiros/Jailers), Brazil’s Globo is going back to school with Segunda Chamada (Second Call), which focuses on the demands facing the country’s state education system.

The series follows Lúcia (Debora Bloch), who returns to teaching by taking on some evening classes for youth and adult education at the fictional Carolina Maria de Jesus State School. Looking for a fresh start after a traumatic experience in her private life, she clings to the opportunity to help students with their education and give them a brighter future.

Her hopes for her pupils are shared by other teachers at the school: history and geography teacher Sônia (Hermila Guedes), newly arrived arts teacher Marco Andre (Silvio Guindane), high-spirited maths teacher Eliete (Thalita Carauta) and practical principal Jaci (Paulo Gorgulho). Together, they face daily institutional abandonment, lack of resources and recognition, and deal with their diverse personal conflicts and dramas.

Written by Carla Faour and Julia Spadaccini, Second Call is coproduced by Globo and O2 Filmes, and directed by Joana Jabace (Harassment).

Here, writers Faour and Spadaccini discuss rooting the series in reality and the importance of drama with societal themes.

What are the origins of Second Call?
Carla Faour and Julia Spadaccini: We met each other in the theatre, more than 15 years ago, but our professional partnership really started when we met again in the halls of Globo, to collaborate on the projects Slaps & Kisses and Chacrinha. With an increasing professional synergy, we welcomed Second Call as a challenge and an opportunity: giving visibility to the topic of nighttime education for adults.

Why did you want to focus on the education system and how did you decide what specific story to focus on?
Our school tries to highlight the reality of the most neglected part of the educational system, because the nighttime educational programme for adults is almost like the ugly duckling of education. It gathers people who were not able to finish their studies regularly and decided to face a double journey to graduation, with the tiredness they accumulate during the day following them into the classroom. We also show the reality of the teachers, who need to deal with different and repetitive issues: the tedious working hours, the precarious infrastructure and the violence that is becoming more and more present in this type of school.
In Second Call, we enter the universe of state schools, located in the outskirts of Brazilian cities. This is a reality that we think we know but, when we dig deeper, we notice it is an entirely different story. We tried to show the challenges faced by the ones who teach and the ones who wish to go back to school.

Were you inspired by any real-life stories or examples?
Our stories were freely inspired by true events, because our concern has always been creating a piece that is close to reality. We needed a lot of dedication and research to understand this universe and those who are part of it. We paid many visits to state schools and their nighttime programmes and talked to teachers and students. It was a long road, which started in mid-2017. We collected profiles from students, conflicts and different topics and then fictionalised all the material we gathered.

How would you describe Lúcia and how do we follow her through the series?
Lúcia is our protagonist. She portrays the teacher who is in love with her profession and takes any chance, to try to make students see education as a token of hope for better days. Our Portuguese teacher starts working in nighttime education after a big trauma causes a deep impact in her life, and completely changed the way she relates to her students. But Lúcia is fearless and has a natural strength that motivates people to get in motion again. Even though she carries her dramas – like a marriage that is no longer the same – the teacher does not give up the fight easily and is willing to talk to her students and try to help them rethink their prejudices.

Why is a school a common arena for television drama? What dynamics and tension can we find there?
School usually represents a family environment for the audience, because everyone has a relationship with the institution – either by its presence or absence. Most people have memories of this time – the teachers who marked their lives, their school friends and the life lessons they learned. The fictitious State School Carolina Maria de Jesus is a cauldron, where sometimes life is peaceful, and sometimes it is not. But, in essence, it is a space of hospitality, where people feel welcome and socially included. In Second Call, everything happens in one night, with approximately three students’ plots highlighted, intertwined with the teachers and their stories and, in the background, the other people.

Where was it filmed and how is the school location used to create a visual style?
Second Call was entirely shot in one location, and this space became another character within the plot. The building where the story happens is a historical and symbolic construction in the city of São Paulo. The space was built in the 1950s to host the São Paulo Jockey Club School but 10 years later – after hosting some private schools – it became vacant. After a long search, the location was discovered by the artistic director of the series, Joana Jabace, who saw in the building the ideal place to portray the story of the series: not only in terms of the narrative instance, but also for aesthetic licence.

How can social dramas best succeed on television?
Our story brings to light a discussion of the social reality of our country. As authors, we put ourselves in this creative and screenwriting process, with a critical outlook on these real conflicts that often repeat themselves. We think dramaturgy, besides being entertaining, also fulfils the role of raising discussions and reflections on several topics. Creating a series that could unite entertainment and social relevance has always been our greatest focus. We believe in the value of shedding light on these social issues.