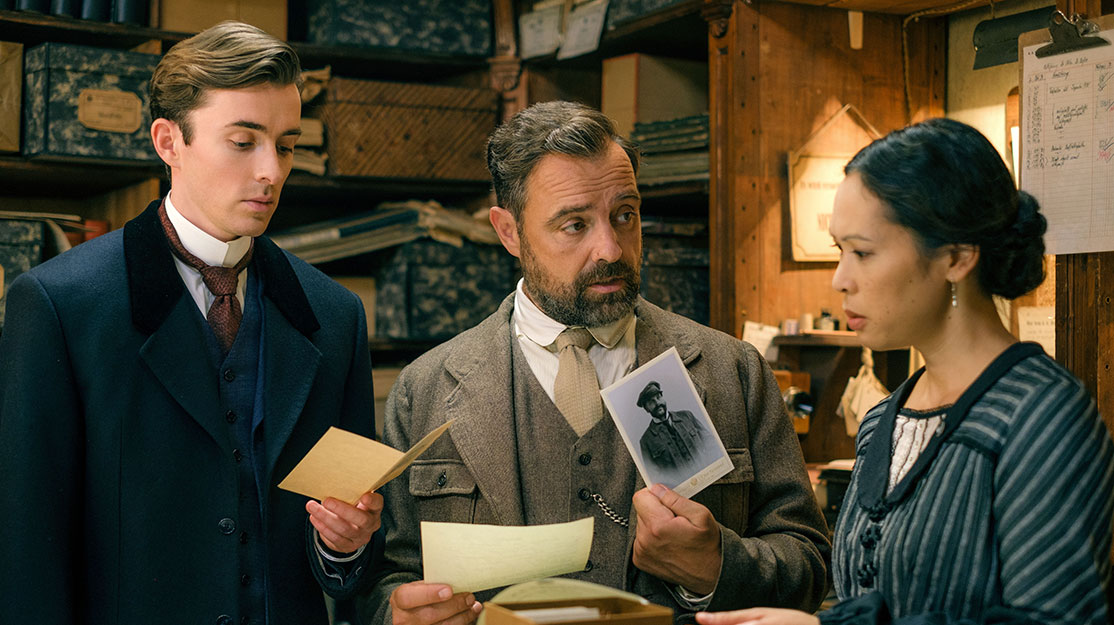 The team behind Vienna Blood talk about reuniting amid the pandemic to film the second season of the period drama, in which a young advocate of Sigmund Freud helps a veteran detective crack murder cases in 1900s Austria.

Set in the early 1900s, Vienna Blood follows the exploits of a police detective who teams up with a young doctor – an early proponent of Sigmund Freud’s controversial psychoanalytical theory – to solve murder cases in the Austrian capital.

In the first season, which debuted in 2019 and comprised three 90-minute films, Detective Oskar Reinhardt (Jürgen Maurer) initially clashes with the arrogant and unconventional Dr Max Liebermann (Matthew Beard). But with the doctor’s methods leading to breakthroughs in seemingly uncrackable cases, the duo soon form an unlikely friendship and effective crime-fighting team.

Now, the series is back for a second run on that will debut on public broadcasters the BBC in the UK, ORF (Austria), ZDF (Germany) and PBS (US). Made by Endor Productions and MR Film, it again features three feature-length episodes.

While each episode revolves around a whodunit, Vienna Blood also follows the family lives of its protagonists, with the series touching on contemporary issues such as immigration and, in particular, anti-Semitism.

The supporting cast includes Amelia Bullmore and Conleth Hill as Max’s parents, Rachel and Mendel. Scientist Amelia Lydgate, meanwhile, played by Jessica De Gouw (The Secrets She Keeps) in S1, has been recast for the show’s return, with Lucy Griffiths taking on the role.

The second season of the show, once again based on Frank Tallis’s Liebermann novels, picks up with Max having set up his own psychoanalysis practice and seemingly refocused on his career away from consulting for the police. That quickly changes, however, when one of Max’s own patients turns up dead – and neither he nor Oskar are convinced by the disturbed woman’s apparent suicide.

Here, Griffiths, director Robert Dornhelm and producer Jez Swimer of Endor discuss filming on location in Vienna, the difficulties created by Covid and the important role of music in the show.

Despite the show consisting of standalone films, the instalments were shot concurrently, which Dornhelm found challenging.
Dornhelm: We shot the three movies in parallel, so out of order. All the family scenes or the police station scenes had to be done for all episodes so that we didn’t have to return to the same locations, which made it a little bit difficult.
I usually don’t do TV series. For me, these are movies, and every movie has a structure. To say, ‘OK, go to the police station and do all the things regarding all three films’… it’s strange.

Both Dornhelm and Swimer contracted Covid during production but, much to the director’s relief, no cast members became infected at any point.
Dornhelm: We started on a bad note – I was the first Covid patient. But that was not so difficult. It’s more difficult if the actors have it, which happened on my next movie. We can be replaced, but the actors cannot. You have to stop and wait until they get well again. From the production side, that’s a big challenge and is connected with major money losses.

Swimer: When you make a TV show, you schedule in such detail. So for the 66 days of production, every day you know where you’re shooting, who you’re shooting with and what you’re shooting. When you have to stop, that plan totally changes and it’s a tremendous amount of work behind the scenes to bring everything back on track. We’re really fortunate that our Austrian crew were so good at keeping the boat afloat.

Taking over as Amelia from De Gouw, this was the first time Griffiths had ever had to step into another actor’s shoes.
Griffiths: I was made to feel very welcome, and not like, ‘Oh, everyone misses Jess – but welcome.’ I’ve never taken over from anyone before, but it’s quite nice to have something to [build on]. Jez and Robert said not to do an impression of Jess because that might fail, so I didn’t have the pressure of trying to do anything like what she’d done. But I did have a jumping-off point and an example. Normally you have to do it from scratch, so it was actually quite nice.

Griffiths was attracted by the opportunity to film in Vienna, where she remained for longer than expected because of Covid-related travel restrictions.
Griffiths: It was a very easy city to be in and the people are really lovely. I think that was my favourite part about the whole experience – not just the cast and crew on set but also the people of Austria.
There are a couple of shots of Vienna at dusk or dawn, one where you can just see the sun, and it actually looks like that [despite the show being set over a century ago]. We saw that in real life.

Portraying the city accurately for the period was “crucial” to the creative team.
Swimer: Frank’s books already set the world up beautifully but, through production design and costume design, we had a very clear agenda of being as close as we could be to reality. Robert was meticulous about the research, too.

Griffiths: I loved the costumes. They were so good and helpful, just making you feel like you were popped into the character.

Dornhelm: I grew up in Vienna, so I know the city. I live far away in California, so it was fun for me to return and portray it. Returning to Vienna and working in Vienna was a special job for me.

Dornhelm believes the show’s early-1900s setting provides a fascinating backdrop to its whodunit storylines.
Dornhelm: There were a lot of contradictory things happening. There was a renewal in the arts, yet nationalism grew and people were embracing the First World War, which was a terrible thing. Many of the progressive artists thought the war was a good thing.
So, between having a huge renewal in the arts and the step backward of nationalism and warmongering, it’s a very interesting time. Frank Tallis found that and he uses that very special moment in history to [set his stories].
[Tallis’s books] are very cinematically written, and the setting of Vienna was an advantage for me because I know the city, I know the characters and I know the period. Living there, it’s a time in history that we are very focused on. I didn’t need to do my homework – and from my age, it’s not so far back!

Viewers will find it easy to draw parallels between issues tackled in the show and those faced by contemporary society.
Dornhelm: We again have nationalism that is again thriving and we have similar tendencies of anti-Semitism, all kinds of things that unfortunately are not changeable. That’s the human condition, I guess.

Entertainment, however, is the main aim of the series.
Swimer: It should be entertaining. These clever, twisty-turny stories should be providing satisfaction on a whodunit level. But at the same time, the warmth of the [Liebermann] family and the romantic relationships are an integral part of the whole.
And as Robert says, the historical backdrop and contemporary resonance of the stories we’re telling should punch through.

Dornhelm has an unconventional approach to the show’s music, becoming involved in musical discussions before filming has even begun.
Dornhelm: Roman Kariolou is the composer, a young guy who started working with me a few years ago. He is very sweet and tolerant – I sit with him at his piano before we start filming and we work out the musical themes and tones.
It’s difficult for me to do a movie without already having kind of a musical understanding of it. I just enjoy the fact that I go into the editing room and I already have a certain musical mood in my head.
It’s not the way some people do it – usually, you finish [filming] and then you add the music. I allow the music to influence the mood of the movie.