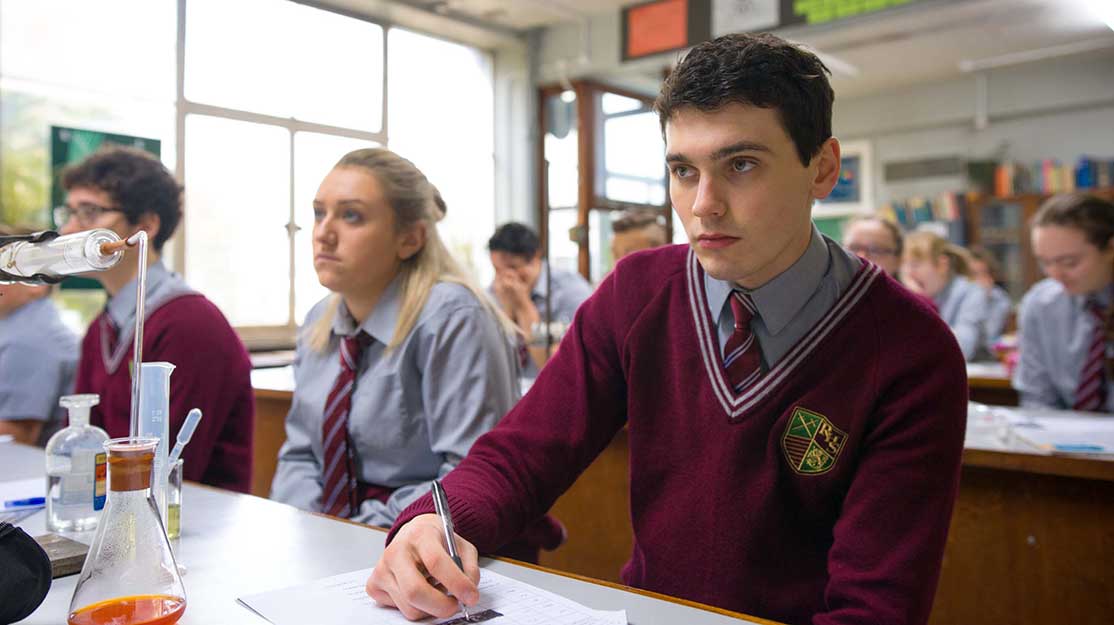 Channel 4 drama Born to Kill explores the psychotic desires of an seemingly normal teenager. DQ spoke to co-creator Kate Ashfield, with contributions from the cast and director Bruce Goodison.

Most recognisable as the co-star of Edgar Wright’s zombie-filled comedy-horror Shaun of the Dead, Kate Ashfield has also appeared in small-screen hits such as Line of Duty, Collision and the US remake of Australian drama Secrets & Lies.

But for her next project, the first-time writer has partnered with Tracey Malone (Rillington Place) to create an exceedingly dark and sometimes disturbing four-part drama with a teenage psychopath at the centre.

Born to Kill is described as a haunting exploration of the mind of Sam (played by newcomer Jack Rowan, above), a schoolboy on the verge of acting out hidden psychopathic desires.

His mum, Jenny (Romola Garai), a nurse at the local hospital, meets Bill (Daniel Mays), who’s trying to reconnect with his elderly mother Margaret (Elizabeth Counsell). Just as Jenny and Bill start to hit it off, Sam meets Bill’s daughter Chrissy (Lara Peake), to whom he forms an instant attraction.

Meanwhile, Jenny learns that her incarcerated ex, Sam’s dad, a violent man named Peter (Richard Coyle), is nearing his parole date. And having told Sam that his father died in a car crash, she must now face telling her son that not only is his father alive, he’s also a convicted murderer.

The four-part series, which debuts on the UK’s Channel 4 tomorrow, is directed by Bruce Goodison, produced by World Productions, executive produced by Jake Lushington and distributed by BBC Worldwide.

Ashfield and Malone first met while they were both living in LA and their sons attended the same school. Their friendship then developed into a writing partnership when they became intrigued by the story of a teenage psychopath and the question of why people do what they do.

Subsequently, the first episode introduces Sam as a caring schoolboy who reads to patients on his mum’s hospital ward and protects a boy getting bullied on the school bus.

“It’s a coming-of-age story at the same time as Sam’s coming to terms with his feelings and emotions and what he’s drawn to do,” Ashfield explains, pointing to influences such as The Ice Storm and Let the Right One In. “He doesn’t look weird. We wanted him to be a wolf in sheep’s clothing. He’s a schoolboy, just a kid that would be undetected as he went about his daily life. So it looks like he’s being nice but it’s all a game for him.”

When this caring facade gives way to something decidedly more sinister and Sam’s true nature is revealed, causing him to act on his fascination with death, Ashfield hopes viewers will feel both sympathetic and unsympathetic towards the character.

“There will be moments of both from scene to scene, hopefully,” she says. “That’s the whole point of him being a child – could something stop him? If the stars aligned, would he have done it differently? But then in the end, his personality takes over. Even at the end of it all, you still have some kind of feeling for him because it’s not all within his control – the way he is the way he is, which you get to by the very end.”

Questions over whether Sam’s personality and behaviour is caused by nature or nurture and if he was truly born to kill come increasingly into focus when Jenny receives news that Sam’s father may be released from prison for a horrific crime not entirely detailed in the opening episode.

“He’s fascinated by death, but not in a usual way where you see psychopaths torturing animals,” Ashfield says of Sam. “From the outside, to the other nurses, it looks a bit odd [that he spends so much time at the hospital]. But as a parent, you think it’s quite sweet because he’s reading to these people. It’s good karma that he cares for older people, but it is all about control and that they are weak sitting ducks to him. It’s an environment that makes him feel stronger, not weaker.

“Then, as it goes on, there are questions over what his mum should do and how much you can put down to normal teenage behaviour. You don’t actually call children psychopaths because a lot of teenage behaviour is very similar. At what point do you say they’re definitely a psychopath?”

Through a potential love story, Sam’s character is placed in stark contrast with Chrissy, who on the surface is a brash rebel but in truth is somewhat vulnerable.

Rising star Peake, who plays Chrissy, reveals: “Bruce and I discussed whether she is or she isn’t [a psychopath]. She definitely possesses some traits, but the thing with psychopaths is, from my research, there’s a formula that makes a psychopath. There’s got to be a few factors. She’s just drawn in by Sam, she’s lost and is intoxicated by him and is happy to just have someone to reach out to because her dad is a bit in his own head with Margaret.

“It gets pretty tense [in later episodes]. It all comes to a head and she realises the mess she’s in and how she’s gone too far with trusting her instincts and going with the flow. She goes in a circle of wanting to be with her dad, drifting away from that and being a rebel kid, and then realising what she’s getting herself into.”

Director Goodison adds: “It’s safe to say Chrissy finds her moral compass after being thrown off it by the charms of Sam. Sam’s moral compass never really waivers.”

Rowan watched documentaries and films and read lots of background material when preparing to play Sam, but ultimately decided not to base the character on any particular real-life psychopath.

“I’m creating my own psychopath here so I took something from each of these people and put it in a box, shook it up and came up with something,” the actor says. “There’s a bit where Jenny is talking to his headmaster and they talk about Sam not having any friends. Really that’s a choice by Sam. When he meets Oscar, that’s someone Sam can control, somebody he can make do what he wants them to do, a puppet for him. They’re not properly friends – there’s no emotional involvement there because this is someone Sam can just use.”

As Chrissy’s dad Bill, Mays jokes that he is playing a less fiery character than he is known for, having previously appeared in small-screen dramas including Line of Duty and Ashes to Ashes.

“He’s kind of hapless but is a relatively normal character for me to play – it was refreshing,” he admits. “It was nice to play someone not as explosive for a change. He meets Jenny and that relationship blossoms and it’s the tentative beginnings of a relationship between those two, as it is between the children as well. So as you can imagine, it becomes incredibly complicated.

“The power of Born to Kill is that the main protagonist is going through a coming-of-age story as well as succumbing to these psychopathic tendencies, but it plays out in a very domestic setting. It could be any small town in any part of the country. So that contrast really is what I think is compelling about the piece. It’s the extraordinary happening in a very ordinary environment.”

When it was first conceived, Born to Kill was set in America and intended for a US network, owing to the writers’ desire to set it in an anonymous small town. Following Channel 4’s interest, however, the series was relocated to the UK, with filming taking place near Cardiff in Wales.

“Originally this was 10 seasons in our head. We had all sorts of ideas, such as Sam going into the army,” Ashfield says. “It was a long-running, ongoing drama but now it’s very much a contained piece.

“It was set in America because of those vast spaces where you think anything can happen. You wouldn’t know what was going on, so Sam could get away with things quite easily. The difficulty with setting it here [in Britain] was we didn’t want it to be anywhere specific. If we set it in the Scottish Highlands, for example, it would just be about Scottish people that were crazy and it wouldn’t be as relatable. So the idea of it was it was a commuter town that you wouldn’t really go to unless you lived there, so it was meant to be anywhere.”

Goodison came on board early in pre-production, after Channel 4 had greenlit the series, and Ashfield notes that he bought into the creators’ vision for the show.

“We didn’t want it to look like a TV show, more like an independent film, like something you don’t normally watch,” the writer says. “It’s otherworldly, like a magical fairytale nightmare. It’s our world but also it’s definitely not our world, it’s a darker world.”

For the director, the challenge was bringing an audience to a character who has no empathy for others and ultimately gives in to his desire to kill.

“I was trying to give the audience as much access emotionally to how that happens, even to the point of before he does kill, there’s a point of return,” Goodison observes. “It was just about making sure we edged up every moment we could access to Sam, whether it was observing a dying bird or when there’s a tear off, these are access points where Sam’s character starts to leak and you start to look at his subconscious in a way other people wouldn’t notice.”

Ashfield, who is also an executive producer with Malone, confesses that Born to Kill was a hard piece to cast, owing to the fact that she believes actors can make or break the show through their portrayal of the story.

That’s why she is particularly impressed with Rowan, who she describes as “amazing.” She continues: “There were some other really great contenders and they all had different qualities. But what Jack seemed to have is he can change the quality of his face quite quickly and seems to be able to make his cheeks go red and look quite vulnerable, but then look angry and dislocated the next. That was really impressive.”

Goodison is equally full of admiration for Rowan, who echoes Ashfield’s compliments of the young actor’s ability to change emotions very quickly.

“Being able to sell a line convincingly when you’re a teenager while trying to hide a certain mental illness, let’s say, is a tricky thing to do as an actor because you put on faces and masks all the time,” he says. “But what Jack was able to communicate was a sense of self through that. It was that kind of ability to be able to change very rapidly and emotionally given whatever was thrown at him.

“Plus he has these soft, 1950s matinee idol looks, which play against some of the sharpness of the part. I felt genuinely empathetic for him, even though he was doing and saying some horrible things. It’s a very tricky thing to get right for an actor and Jack’s got it in spades. All of these scenes could be played so many ways and having the ability to be that flexible and open was terrific testament to Jack and the rest of the cast.”

As dark and edgy as you might expect from a Channel 4 drama, Born to Kill is certain to leave viewers gripped as Sam’s story plays out to its conclusion.