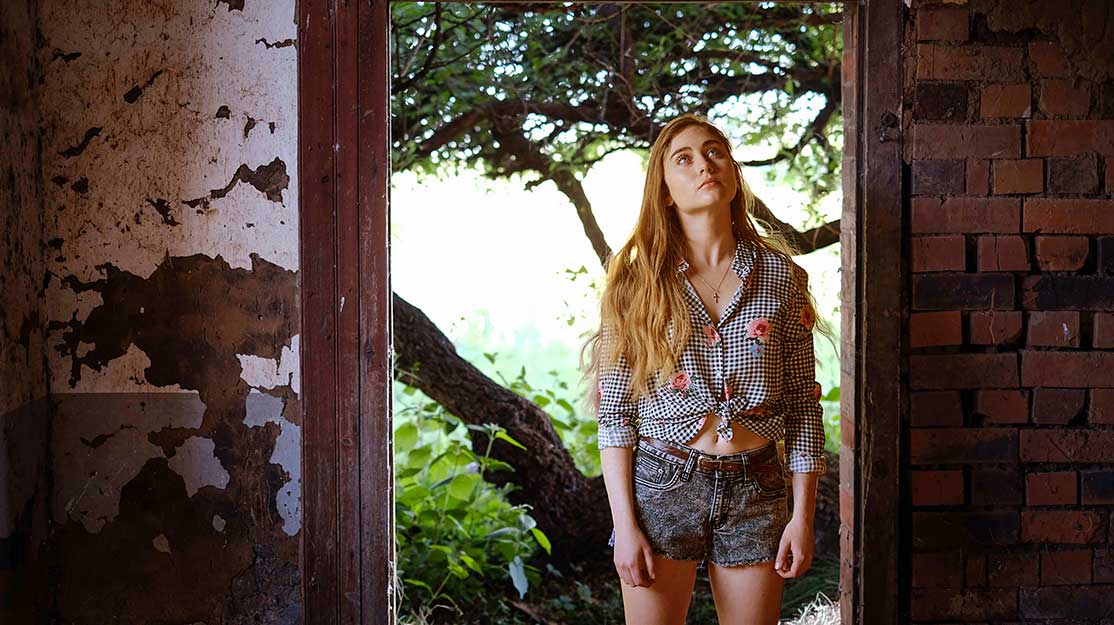 The creative team behind The Girl from St Agnes take DQ inside the making of the eight-part murder mystery, the first original drama from South African streamer Showmax.

From the overhead shots of foreboding forests to the large metal gates masked by fog, an unsettling, eerie feeling is established from the start. These stirring visuals don’t emerge from the latest Nordic noir series however, but the opening moments of murder mystery The Girl from St Agnes, the first original drama from South African streaming platform Showmax.

At St Agnes, a prestigious all-girls boarding school, police record the death of popular student Lexi Summerveld (Jane de Wet) as a tragic accident. However, drama teacher Kate Ballard (Nina Milner) is unconvinced by the official verdict and decides to start her own investigation. Discovering that she didn’t really know Lexi or the school at all, Kate attempts to put together a puzzle that threatens to unravel a myriad of secrets.

The eight-part series broke records on its release in January, with Showmax quick to announce it had drawn more unique viewers to the service in its first 24 hours than the previous record holder, its original comedy Tali’s Wedding Diary. The Girl from St Agnes’s debut also achieved more than double the views racked up by that of its most popular US series, though specific figures were not revealed.

The ratings provided evidence of the value of local content and showed that African productions can compete with the best in the US, Europe and around the world, said Showmax head of content Candice Fangueiro.

For the makers of The Girl from St Agnes, which is produced by Quizzical Pictures and distributed by Red Arrow Studios International, the intention from the outset was to make a series that reached the standards of the best global drama available on Showmax.

The drama is based on an idea Quizzical MD and producer Harriet Gayshon had been kicking around for a while. After inviting the company to pitch, Showmax bought it in the room.

Gayshon went to a private school similar to St Agnes, which she describes as a “pocket of England” in South Africa. “A good deal of them are Church of England-based and, because we’re an ex-colony, they feel like real English institutions,” she says. “So it just felt like a great premise to tell a story that’s authentic in South Africa but that other people could relate to.”

“It started with one line: A girl gets murdered in a private school in Pietermaritzburg,” head writer Gillian Breslin recalls. “And Harriet handed that off to me and let me run with it. With my team of writers, Sean Steinberg and Zoë Laband, we spent two months in the workshop figuring out the characters, the plot, did some research with kids who are currently in school and beat it out in the room. It’s very much Harriet’s baby. We started with a line and took it from there.”

Taking inspiration from international hits such as Top of the Lake and Broadchurch, co-producer Nimrod Geva says Showmax was keen to create something edgy that couldn’t be seen anywhere else. “So in terms of the sex, language and some of the issues we’ve dealt with that are very much hard-hitting and relevant in the #MeToo era, they wanted something that would go as far as it needed to in terms of story and tone and themes.”

Notably, Gayshon says one of the most unusual things about the series is that, coming from a country with 11 official languages, it’s filmed in English. That decision informed the setting for the drama, as it needed to be somewhere English was spoken naturally.

Beyond that, the creative team were keen to highlight the difference between the school’s prestigious facade and what was really going on behind the gates, while also contrasting tradition with sex and drugs.

The location was also key to the storytelling, placing St Agnes in a part of South Africa that Geva says isn’t often seen on television. “It’s this beautiful, rolling, misty countryside and it encompassed the intensity of this world, with this exclusive bubble dropped into this beautiful landscape. The place itself felt cinematically very attractive, and the misty hills resonate with a murder mystery.”

The drama was filmed in northern Kwazulu-Natal, a province on South Africa’s east coast, in a town called Ixopo. Breslin spent a few days there researching scenes and building characters, while focus groups of high-school teenagers were used to build authenticity and ensure the script captured the real world.

Gayshon says: “It was one of those charmed projects where it started to gel very quickly, because everyone was very passionate about it and saw it as something quite new and a new opportunity. We had a mad deadline, but the writers did it. Then we had a very quick production and editing process to get it up and running. Everyone was so invested and passionate about it. It felt like a huge departure from everything else we see on our screens.”

The other dilemma was ensuring The Girl from St Agnes was modern enough for its younger-skewing target audience. “There’s something a little fusty about some of the English-language content that does exist here,” Geva notes. “But it felt like it really captured themes that were incredibly relevant about privilege, whiteness, race and gender relations. It captures where South Africa is, especially some of the more privileged members of society, trying to retreat into a world that is removed from the real South Africa and showing that, no matter how high your walls are, the dangers of human nature and lust and violence are always present.”

Geva says: “It was a really female-driven process and that infused the story with energy, passion and excitement. It’s a story of what happens to young girls in that pressure cooker, so it felt like women would get it and be able to draw those scenes out. I think it did very well.

“We were very lucky in our choice of directors. They were both women and both had incredible can-do attitudes, even though we were shooting very fast and often under uneasy conditions. They were quite remarkable in holding on to the vision but moving very fast and practically through it.”

Cooke directed five episodes, while Lee helmed three. They would often be on the phone to Breslin to ask questions of her characters and work out how best to bring the writer’s vision to life. Their close collaboration also enabled them to tie up any loose ends, in an age when viewers unpick every little detail to find clues to the killer’s identity in murder-mystery shows.

“Writers have a tough time in this genre because more and more people are starting to enjoy murder mysteries,” Cooke says. “They expect a very high standard of mystery from you. For writers, it’s very difficult to get it right because there are lots of audience members who love that genre and want to be part of it. They want to figure it out.”

Breslin picks up: “I don’t think we were ever going to reinvent the wheel [in this genre]. What I was most influenced by in terms of the characters and the world was Broadchurch, particularly the first season. I won’t lie, I also watch Pretty Little Liars and grew up with Buffy the Vampire Slayer. But we knew what we were trying to do was something different, something I haven’t seen on South African television for an English audience. The world and the characters in Broadchurch were just fascinating; they were immersive, and that was something I really wanted to do with our world as well.”

Like Breslin, Lee went to a private boarding school and used her own experiences to shape the story treatment with Cooke. “Once we had that together, Catherine and I worked very closely,” she recalls. “We sat down together from the beginning and conceptualised and wrote the treatment and put it together. We did all our visual references together.

“What we wanted to try to do was create an undercurrent of unease, of something that wasn’t quite right. So the idea was to make it look pretty on the surface and have everyone look pretty and shoot it pretty but, because we shot handheld, there was this sense of unease and disquiet happening all the time. The handheld also gave it a sense of being quite loose in the way we shot it, with lots of close-ups and the camera moving around the actors a lot.”

Before shooting, Cooke and Lee would group together different actors so they could familiarise themselves with their characters and flesh out some of the dynamics. This also ensured they wouldn’t be strangers when it came to filming,

That established a shorthand between the actors that helped the production stay on schedule, with up to 12 script pages being filmed on some days during the 10-week shoot. Filming out of sequence across all eight episodes, with scenes scheduled by location, was complicated further by the numerous flashbacks that feature in the show, meaning the cast and directors were constantly having to adjust between scenes.

Quizzical also had to bring in new infrastructure to improve communications on site, while many of the cast and crew had to stay an hour away from the set because of a lack of accommodation. In practice, the school was a composite of various locations, including schools across Johannesburg, though the main base was a former Trappist monastery. Blue-screen technology was used to tie everything together.

Cooke is buoyant about the shockwaves the series is sending through the industry. “It has proven to most of the broadcasters that South Africa can make fantastic things of international standard and people want to watch it,” she asserts. “With this show, it has proven there is a demand for [the genre] and people like it. South African audiences want to see themselves and want to watch some good stuff.”

While international productions have largely used South Africa for its service industry, with Black Sails and Troy: Fall of a City among the dramas filmed in the country, Breslin hopes that The Girl from St Agnes will mean “people will start to look to South Africa as more than an industry service centre,” adding: “Our crew get a lot of experience, but until now there haven’t been a lot of avenues for South African creators.”

With The Girl from St Agnes winning international backing and Netflix’s pushing into original South African content with upcoming secret agent series Queen Sono and teen drama Blood & Water, those roads are now opening up as creators find a way to bring their stories to viewers around the world.