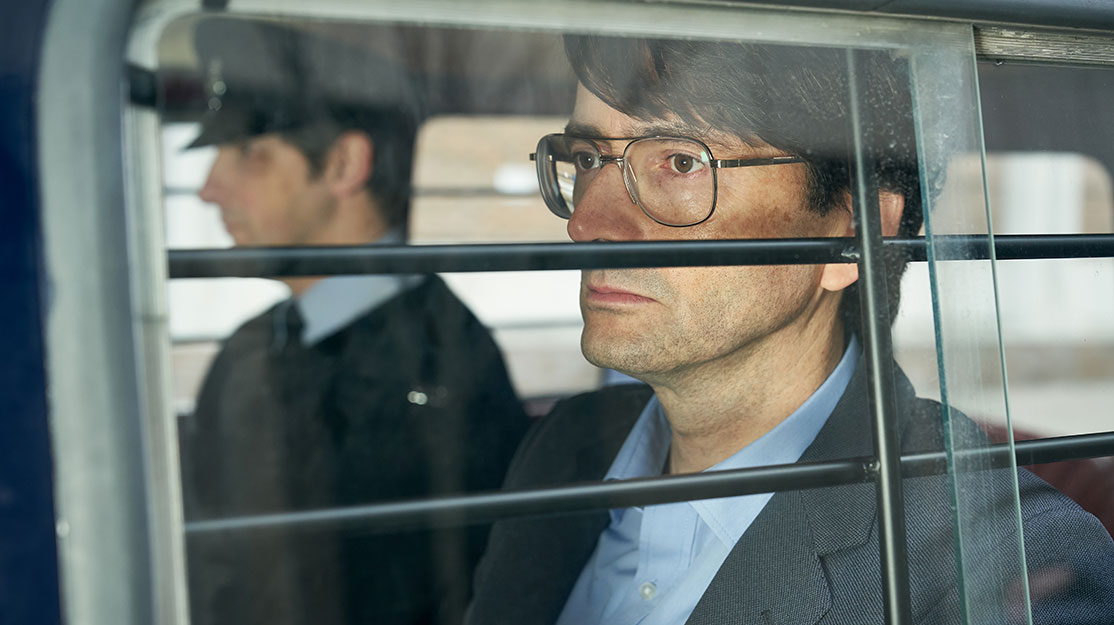 The cast and creative team behind ITV true crime drama Des discuss their approach to portraying Dennis Nilsen, who murdered 15 people over five years in one of the most infamous criminal cases in UK history.

While David Tennant was on the hunt for a killer, he also began talks about playing one. The former Doctor Who star was on the set of hit crime drama Broadchurch, in which he played a detective investigating a murder in a small town, when he started discussing a project that aimed to dramatise one of the most infamous criminal cases in UK history.

Known as the ‘Kindly Killer,’ Dennis Nilsen murdered a number of boys and young men between 1978 and 1983. He would meet and befriend his victims, who were often homeless or living in poverty, before inviting them back to his North London flat.

When he was caught on February 9, 1983, he admitted 15 murders, making him Britain’s most prolific serial killer at the time. But frustrating the police and the investigating detectives, he said he couldn’t remember his victims’ names. With no apparent motive, inconclusive forensic evidence and most of Nilsen’s victims living off-grid, the police started one of the country’s biggest ever manhunts – not for the murderer but the murdered.

Tennant, who plays Nilsen in the three-part drama called Des, met director Lewis Arnold on the set of Broadchurch and discussed the project, which Arnold had been developing with writer Luke Neal based on Nilsen biographer Brian Masters’ book Killing for Company.

“I’d read Killing for Company many years before, partly because I lived just down the road from Cranley Gardens [where Nilsen lived], so it felt like a bit of local history,” Tennant says. “And also because here was this bloke who, a couple of people had said, ‘He looks a bit like you.’ As an actor you think, ‘Does he?’ Then you start investigating this story and it’s unfathomable. What is the psychology that allows someone to have this extraordinary double life that he was leading?

“I read a very early draft Luke had written. It absolutely found the right way to tell this story. It wasn’t sensationalist, it wasn’t celebrating the violence. It was memorialising the victims, if it was doing anything. This is a story we should tell. I was 12 when he was arrested so it was a name I was aware of. He was a boogey man in the national conscience. It’s taken about five years from when we first started talking about it to getting it on screen. With these stories, it’s tricky to get the balance right because you want to tell it with appropriateness, you want to tell it with a sensitivity. You don’t want to slip into sensationalism, which would be too easy to do and would not serve the victims of this.”

Told from the perspectives of three men, the story opens when Detective Chief Inspector Peter Jay (Daniel Mays) is called to a flat in Cranley Gardens following the discovery of a drain clogged with rotting flesh and bones. When Nilsen (Tennant) returns home to find the police waiting for him, he freely admits to killing “15 or 16, I think.” As DCI Jay attempts to secure a conviction and identify the victims, biographer Masters (Jason Watkins) attempts to find out why he did it.

But what is unusual about this crime drama is that viewers don’t witness any of Nilsen’s crimes, only meeting him as he is arrested and begins his startling confession.

“Very early on we knew we didn’t want to show any of the crimes, simply because in our view the only thing those poor men did was go home with someone they met in the pub for a few more drinks,” Neal says. “They didn’t deserve to be gratuitously shown in a TV drama in the moment of their death. We wanted to tell another story, which is the human cost of Dennis Nilsen – what comes after he’s caught and the people who have to investigate what had happened for five years.”

Arnold says another reason to avoid showing his crimes is that Nilsen was the only person who could have given an account of them. “You can’t really focus on the crimes themselves because the details of those crimes come from the person we’re trying to interrogate and question in terms of what he’s saying, who he is and what he’s done,” the director says. “You can’t quite trust the events themselves anyway. We knew it was not a thing we could do.”

But one thing they did want to do was shine a light on the victims and correct some of the “misinformation and mistruths” about them. “Those prejudices meant this narrative had been skewed somewhat for the last 35 years,” Neal says. “It became quite a duty of ours, in developing the script, that we righted some wrongs and corrected mistruths people had had for so long.”

Relatives of the victims were approached before filming began, with some willing to speak to the production team and others not wanting to be involved.

“This is incredibly raw for a lot of people. This is a real tragedy and there are real victims at the heart of the drama,” says producer Kim Varvell. “It’s about approaching things with empathy and sensitivity, whether people didn’t want to be involved or did. We had a lot of interaction with Brian Masters. Peter Jay had passed away but we spoke to police officers so we could get as much of an understanding of the people who were involved and had interaction with Nilsen.”

Mays met Jay’s widow and son, who gave the actor a “blueprint” with which to portray the “diligent, hard-working, experienced” policeman leading the investigation, which the actor describes as a “murder case in reverse.”

“As soon as they arrested him and interrogated him, he didn’t stop talking,” Mays says of Nilsen. “Nilsen said himself it was like he was unburdening himself. He named 15 victims but because he disposed of the bodies in the way he did, there was hardly any evidence. Peter wanted to get closure for the families. It’s very telling that two years after the Nilsen case he left the police force. He was absolutely bruised by it. It was draining for him. For whatever reason, he decided he’d had enough and stepped away from it.”

Watkins had previously won a Bafta for his real-life portrayal of the title character in another ITV miniseries, The Lost Honour of Christopher Jeffries. For Des, he met with “eloquent” Masters, who he says was appalled at how the media at the time had “inferred the disfunctionality of a murderer is somehow akin to the perceived disfunctionality of being homosexual.”

Masters, Watkins says, “was amazed at the way this person could do such things and the growing horror as it appeared on television.”

To play Nilsen, Tennant studied footage of him, as well as reading about him and speaking to those who knew him. But he says he was keen to avoid doing an impersonation of a figure many viewers might remember.

“What’s important is you’re trying to get to the truth of something, something you can recognise as a human being, especially someone who is not like so many of us,” he explains. “I did spend quite a lot of time studying him, listening to his voice, trying to think yourself into that space. It’s hard to break down. It’s a cocktail of things you do. He was an expert in self-justification and retrospectively he wrote and wrote – he’s written an autobiography and endless prison jotters full of explanation and self-righteous indignation and talked about how guilty he feels at times. But there’s no consistency to it. The only consistency you can find is possibly narcissism. He had a strong sense of his own righteousness, which was quite useful to key into.”

The actor adds he had no reservations about playing Nilsen, “not with the scripts we had.” He continues: “From an acting point of view, these are the psychologies you are fascinated by. It doesn’t mean you agree with them or commend them. Trying to unpick what went on in the mind of someone like that, it’s horrifying and it’s fascinating.”

Filming took place in London towards the end of 2019 and into January this year, with the biggest challenge being recreating 1983. A set was built for the interior of Nilsen’s Cranley Gardens flat, while prison scenes were shot largely at HMP Holloway, a women’s prison Nilsen would never have visited. But while the production did film across North London, none of the real locations were used.

“Being able to build the interior of Cranley Gardens was brilliant for us logistically and also for the period design,” says Varvell. “Anna Higginson, our designer, did such an amazing job. It was really eerie and was an exact replica. So having a set build and being able to do that as the interior was really beneficial.”

Produced by New Pictures and distributed by All3Media International, the series takes its name from the nickname Nilsen called himself and that people where he worked knew him by. He was also head of a union, “the champion of the downtrodden and someone who was nice to people who needed an ear or a pint in the pub,” Arnold says. But in reality it was all an act to get people back to his flat.

“‘Des’ to me is a fallacy that allowed Nilsen to control his own narrative,” the director says. “The job of Brian and Peter in the series is to get past Des and see the real person that’s behind it.”

Tennant notes: “One of the things Dennis Nilsen became obsessed with was ‘The Legend of Des.’ Even when he slipped out of public consciousness, there was a sense he wanted to get back into it, which is why I’m very relieved [he died in 2018]. When we started developing this, he was still alive and I’m very relieved he’s not because I would hate for this to go out and for him to be sitting in a cell somewhere imagining we were in any way glorifying him. It’s right and proper this is transmitting after he’s gone.”

The drama throws up the question of why Nilsen committed those murders, and Tennant believes not even Nilsen himself knew why. “There were moments of blind rage that had no premeditation to them. There were also elements of preparation where he clearly went to great lengths to get ready for luring people back to his flat with the intention they might never leave,” the actor says. “We’ll never know for certain. I continue to change my mind about what his motivation was and what kind of individual he was. He remains an enigma. All we can do is tell these stories to try and make sense of how people end up in the place Dennis Nilsen ended up.”

With the use of documentary footage firmly setting the background to Nilsen’s killings, Neal and Arnold also want Des to inform more people about what actually happened and why he possibly managed to get away with it for so long.

“There are so many similarities to 1983 in 2020 that I hope people watch this and think we need to make sure someone like him is never allowed to get away with it again,” Arnold says. “There are certain steps we and the government can do for people on the streets who find themselves victims of poverty, to ensure they are given the help and humanisation they need, which means they cannot go missing without anyone knowing.”