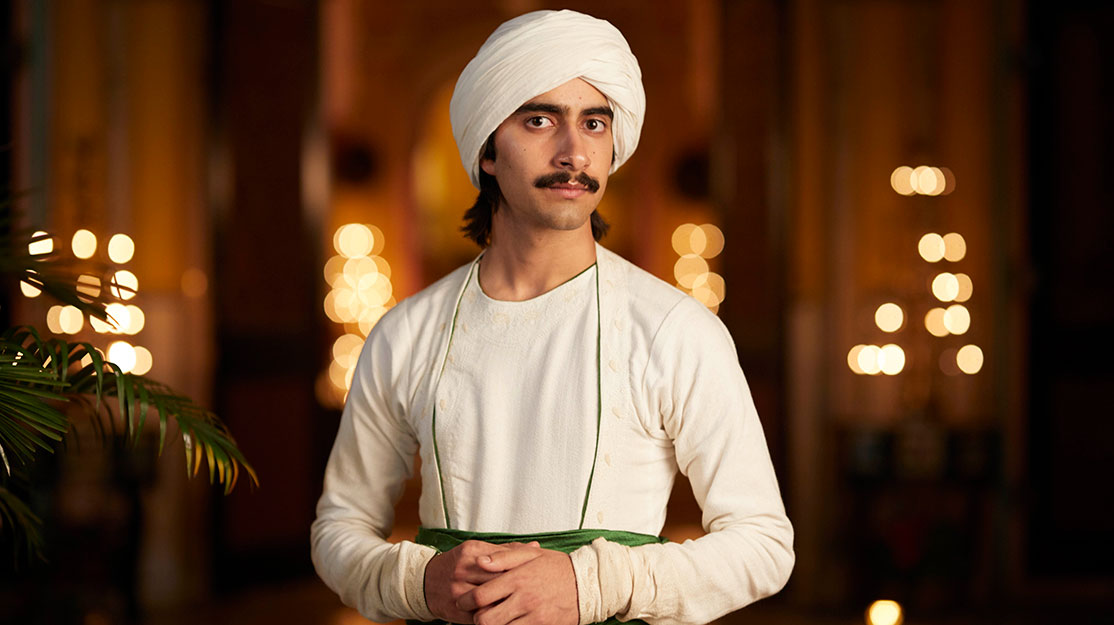 After starring in Gurinder Chadha’s latest feature film, Viveik Kalra reunites with the writer/director for her new TV series, Beecham House. He tells DQ about the upstairs-downstairs drama, set in India in 1795.

In Blinded by the Light, the latest movie from Gurinder Chadha, Viveik Kalra plays a British Pakistani teenager whose life is uniquely inspired by the music of Bruce Springsteen.

Kalra’s star turn in the coming-of-age film led him to immediately reunite with the acclaimed writer/director on her next project, Beecham House, which also marks her return to TV drama.

“We did the film a couple of months into 2018,” the actor recalls. “I’d auditioned two or three times for it, got it and then filmed it for eight weeks. Then, right near the end, she went, ‘I think you’d be right for a part in this show I’m doing.’

“I forgot about it but she came back in, which was rather exciting. It was good because I guess, in some ways, because I’d just led a film of hers, she knew she could rely on me in that part, which is lovely.”

Kalra describes Beecham House as a “very special project,” owing to the fact it takes place in India in 1795. “It’s not a time period you usually see, it’s just amazing,” he says. “It’s an incredible time period, very culturally uplifting, at a time when the British and French are visitors and aren’t ruling over Indian people, so you have a lovely view of India untouched and untainted.”

The six-part ITV series sees John Beecham, a former soldier in the East India Company, arrive in Delhi determined to leave his past behind him and start a new life as an independent trader, taking up residence in the titular mansion. However, the staff soon harbour questions over their secretive new master, who arrives with his infant son August.

One of the first people he meets at his new home is Kalra’s Baadal, the head of the property’s staff, who helps John (Tom Bateman) settle into his new life. It’s this dynamic in the home that has seen Beecham House dubbed ‘Delhi Downton,’ drawing comparisons with ITV mega-hit Downton Abbey, which charted the fortunes of the aristocratic members of the Grantham family and their servants.

“Baadal is the initial link to John when he comes to the palace for the first time,” Kalra explains. “It was an interesting character for me to look at because it’s this upstairs-downstairs drama and I’m the link between the upstairs and downstairs, so it was a great opportunity.

“Due to the nature of the character and the family who stay in the house, it’s uplifting for the servants because they can do things in the house that typically weren’t allowed. When someone enables you and uplifts you, you can be more of a person with them rather than just a servant, so I think that makes the dynamic of Beecham very interesting.”

Baadal’s loyalty to his job and his master is challenged, however, when he falls for Chanchal (Shriya Pilgaonkar), which puts him at odds with Daniel Beecham (Leo Suter) and Ram Lal (Amer Chadha-Patel), forcing him to choose between duty and passion.

“It’s a catch-22 because when the Beecham family comes, they enable the servants to relax and not be on edge,” he adds. “Baadal has time to think about other things in his life, so it’s interesting to see whether he follows his head or his heart.”

Kalra says his relationship with Chadha while filming Beecham House was different from that during Blinded by the Light. On the feature film, as the lead actor, he kept his head down and got on with the job. But on Beecham House, he felt less of a burden, with the weight of the series placed on Vanity Fair star Bateman.

“I was able to relax a bit more. I was chilling out on set, which was amazing,” he says. “But although I had a smaller part, it didn’t feel like a smaller part, which I think is quite a lovely thing about a director and how they make you feel. Gurinder talks to everyone with the same sort of vibe and decency, regardless of whether they are an SA [supporting artist] on set or whether they’re the lead actor. I found that throughout the movie and throughout Beecham.”

Describing writer, director and producer Chadha as “a force of nature” on set, Kalra continues: “She will always have more energy than you, no matter how young you are. I’m 20 years old – every day she would have more energy than me! She’d be singing, dancing, she’d be the life of the party. She’s one of those people who knows what she wants, which is lovely, and she’s not afraid to say it. If you’re doing something she doesn’t like, she just says, ‘Don’t do that, do this.’ Then when you do do it, you take the note and she’s lovely and warm and sees that you’ve done something right.”

Interior scenes for Beecham House, produced by Chadha’s Bend It TV and distributed by Fremantle, were shot at Ealing Studios in London, while the exteriors and landscapes were filmed on location across the Indian state of Rajasthan.

“It’s crazy because if you saw the set in Ealing, it didn’t feel fake at all,” Kalra says. “You’re standing there and thinking it doesn’t look completely real to the eye but then you look at it on camera and it looks exactly like the real thing, which is a credit to everyone who worked on it. Then when you start filming in India, it is totally different in terms of the number of people on set, the talent. It was amazing to be able to film there. We were there for a good two months and a lot of the cast hadn’t been to India before.”

Filming in old palaces and then staying in them as well meant Kalra began to feel like his moustached character. But by the end, “I was very pleased to shave my face,” he jokes. “It wasn’t quite as good as another actor called Amer’s. His moustache was amazing and he could curl it up. Mine wasn’t quite at that level.”

British television dramas to have explored India before or during the time known as the British Raj include The Jewel in the Crown, set during and after the Second World War, and Indian Summers, which follows members of the British government and trading community in 1932. But Kalra believes it’s more than just the fact Beecham House is set over a century earlier than these two shows that sets it apart from similar dramas.

“Just the dynamic between the characters is something that won’t have been seen before,” he says. “John is an uplifting character as opposed to one who is downbeat with the servants around him. He’s a mysterious character at the beginning. When it gets down to it, it’s incredibly interesting to see how someone uplifting and incredibly warm deals with pricklier situations in which people are slightly evil and conniving. It’s exciting to see a nice person get around those things, someone nice and human, and how they battle those circumstances as opposed to someone who is mean and evil trying to battle evil.”

Beecham House, Kalra adds, is “a very human story within that world. It’s a period piece, so it would be very easy to act to the period, but a wonderful cast has been assembled with some fantastic Indian actors, some from India, some from the UK. With that wonderful cast, it’s amazing to see people in the time period as opposed to them playing up to it.”