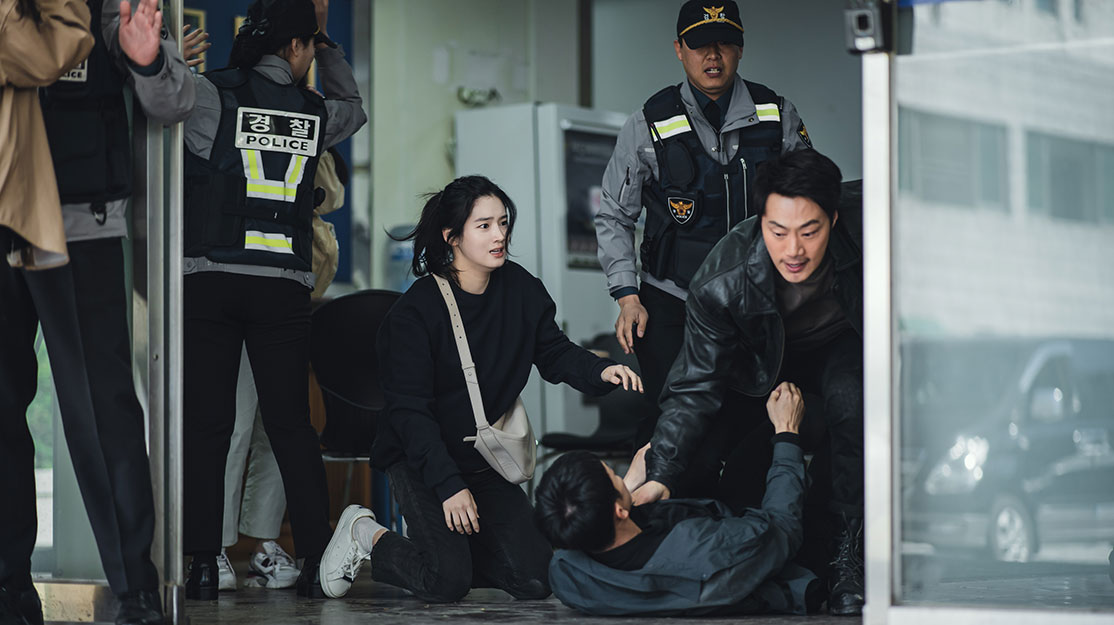 Writer Choi Ran and chief producer Lee Kyungsun tell DQ about Mouse, a South Korean thriller in which the lives of two detectives change after an encounter with the ruthless serial killer they have been chasing.

Over 20 episodes, South Korean crime thriller Mouse tells the story of two detectives and a fateful meeting with the serial killer they have been hunting down after a string of murders leaves the country gripped by fear and chaos.

Jung Ba-reum, played by Lee Seung-gi, is a rookie detective with a strong sense of justice who lives an honest life. Go Moo-chi (Lee Hee-jun) is a veteran detective with a tragic past. But when they meet the psychopath who has left Korea in a state of panic, their lives are changed forever.

The series, which debuted locally on TVN in March this year, comes from broadcaster, producer and distributor CJ ENM and will enjoy its French premiere at Lille-based television festival Series Mania on August 28.

Ahead of the screening, DQ spoke to writer Choi Ran and chief producer Lee Kyungsun about the project. Warning: spoilers ahead.

Why did you want to tell this story?
Kyungsun: When I first reviewed the proposal, I was highly impressed by Choi Ran’s intentions. It is said that psychopaths are born, not made. This is because ‘mirror neurons’ are absent in the brain. Psychopaths, therefore, cannot feel any guilt or sympathy, nor can we expect any repentance or atonement from them. And this is where the writer’s imagination began. Her thoughts of wanting to see a psychopath feeling emotional pain from his own crime and making atonement were, in fact, what we all wanted as well. I also wanted to see a psychopath going through penitence, God’s worst punishment yet the best salvation, and thought the story was worth trying.

Ran: Quite a while ago, I had a chance to attend a class on psychopaths with a crime-psychology expert. Looking at footage and images of murder cases, I couldn’t help but wonder how humans could be ever so violent. I questioned whether they were traits you were born with or acquired after. Then one day I saw an article about a 16-year-old girl killing a nine-year-old girl. When a journalist asked the imprisoned killer about what her difficulties were, she answered she “wanted to go outside and see the flowers.” It wasn’t about feeling sorry for the other kid, nor the parents of the victim.
When I saw that, I was convinced that being a psychopath was innate – she was born with it! She didn’t seem to feel any remorse. This is when I decided to write a story about this. I wanted to see psychopaths feeling remorse and sorry for victims, even if this was a fantasy. I wanted to see them feeling pain.

How did you start this project?
Kyungsun: When I saw the script for episode one, I felt as if I’d just seen a movie, as it had a perfect structure and twist. I read up to episode four in the same spot non-stop. With this, I got to believe in the power of the story. I knew we would need prior consultation regarding broadcast regulations, such as the setting and level of expression, before the actual production, but I believed in the power of the drama and jumped into the project.

How was the series developed?
Ran: Since psychopaths lack the gene to feel remorse and think of their wrongdoing, I needed a device for them to atone for their sins. We thought of the ‘frontal lobe’ transplant. This is impossible in real life, so I thought a lot about how to make this not look fake for the viewers. Apart from this, all episodes were based on real-life events that have happened in Korea.
Another thing I focused on during development was when to reveal the real identity of Ba-reum [as the killer]. If viewers knew too early, I was worried they would hate Ba-reum from the beginning and not watch the series until the end. This isn’t what we wanted. We made sure that viewers pitied Ba-reum at first and found out about his real identity later.

Choi, what is your writing process on the show?
Ran: Writing is always a delight and full of excitement. But it is lonely at the same time, as I prefer to do most of the process on my own. Whenever I questioned myself if I was going the right way, I talked with my characters.

Why is Jung Ba-reum an appealing character that could lead the story?
Kyungsun: With changes in the viewing environment, the traditional 60-minute, 16-episode structure of Korean TV dramas is in jeopardy. Viewers no longer want to follow long stories. This is because there is so much interesting content of various forms to watch besides drama. We needed measures to overcome the environmental threat and the barrier of the 70-minute, 20-episode form.
Jung Ba-reum, a character that goes through three turning points, was the answer to this. After a brain implant operation, Ba-reum, a good-hearted police officer, feels an impulse for murder. He goes through three big changes until he realises he is a psychopath. We believed viewers could enjoy our story without being bored if the leading character had various sides within himself.

In the beginning, how does Ba-reum seek to catch the ‘killer’?
Ran: In real life, many times the criminals get away with what they have done, or are punished with a smaller sentence. In the show, I focused on getting to the killer the same way he did to the victims. We manipulated the instincts that only psychopaths can have in order to find the killer.

How does Jung Ba-reum’s story weave with that of Go Moo-chi?
Ran: Making a serial killer the main protagonist of a story was a big challenge. This is why we set Go Moo-chi as a safety pin. We intentionally built his friendship with Ba-reum in the beginning. Their friendship was important because when Ba-reum retrieved his memory of his real identity, he had to feel sorry for killing Moo-chi’s brother and father. Moo-chi can never forgive Ba-reum, but ironically he is Ba-reum’s saviour. This complicated relationship was important.

What were the initial plans or thoughts on the drama’s visual aspect?
Kyungsun: Choi mentioned the movie Let Me In in an early meeting. A murder happens in almost every episode, but she said she didn’t write the script while imagining violent and explicit bloodiness.
The way she and I visualised Mouse matched. Jung Ba-reum, the murderer in the early stage of the drama, is a psychopath and a genius. The murder of a rational and perfectionist psychopath seemed as cold and organised as Let Me In.

What was it like working with Lee Seung-gi and Lee Hee-jun?
Kyungsun: Some questioned why Lee Seung-gi was offered the role of Ba-reum, as the character is totally different from his previous image [as a singer and actor]. Ba-reum was not simply an evil character, and even after it is revealed that he is the killer in the middle of the drama, he had to draw sympathy from viewers. I believed Lee Seung-gi’s popularity could play a positive role in building the character’s persuasive power.
The actor comprehended this perfectly as well. Despite Ba-reum being a complex character, Lee Seung-gi had a great understanding and built the early stage of the character nicely. He also played the character very well until the end, being perfectly prepared even with a lot of filming to do and his hectic schedule.
Lee Hee-jun was our number-one choice during the casting stage. His acting skills showed the tragic narrative of Moo-chi and were able to draw sympathy from viewers. Episode five, which was technically Moo-chi’s ‘one man show,’ especially, received great reviews. Seeing him completely immersed in the character, even being exhausted and emotionally absorbed, deeply touched my heart.

Where did the filming take place and how did you make use of the locations?
Kyungsun: The plot required filming to take place mostly in real locations rather than on sets. Therefore, the location staff went through a lot of hard work. The fixed locations were the police office and the characters’ houses, which were created on a set in Yeo-ju. Other places were actual sites. Ba-reum and Bong-yi’s village in the beginning of the drama was Jeongneung in Seoul; the prison where Seo-jun and Ba-reum stay in the end of episode one was Jangheung Correctional Institution in Jeollanam-do; and the camping site in episode one was Eunpyeong-gu, Seoul.

Lee, how did you work with Choi and director Choi Jun-bae during development and filming?
Kyungsun: The script was written very elaborately with a long period of research by the writer. As such, leaving out a single thing during the actual shoot could have destroyed the whole storyline. To prevent this from happening, the director and writer went through the script and confirmed the meaning of every single prop and line together during the development stage. Even in the filming stage, we went through a continuous process of confirmation with the writers to preserve the original story.

What is the difference between Mouse and other crime or thriller dramas?
Kyungsun: Despite Mouse being in the crime/thriller genre, I wanted it to depict the story of people around us. Ba-reum, Moo-chi, Bong-yi and Hong-ju go through a huge range of emotions. I wanted the viewers to follow not only the plot but also the emotional aspects. At a fast pace, the drama shows stories of Moo-chi, who helplessly witnesses his brother’s death; Bong-yi, who finds out that her beloved Ba-reum murdered her grandmother; and Hong-ju, who wishes to protect her son from the cold prejudice of being a criminal’s child. I believe these allowed viewers, who get emotional comfort and sympathy through dramas, to feel the complex emotions of the characters and enjoy the series.

How would you compare Mouse with other Korean dramas?
Kyungsun: There have been lots of dramas about psychopaths, but Mouse is the first ever drama to set a psychopath as the main character. Since Korean viewers tend to support the main characters while watching dramas, the protagonists are usually ones who are good-hearted. Having a psychopath as the protagonist, therefore, was a huge challenge. I believe we were able to offset that unfamiliarity with a well-known actor, Lee Seung-gi, playing Ba-reum.

Ran: We have quite a lot of series that deal with psychopaths. However, until now, the shows have focused more on catching the psychopath, regarding them as the villain. For Mouse, I had studied a lot about psychopaths and tried to depict Ba-reum as accurately as possible.