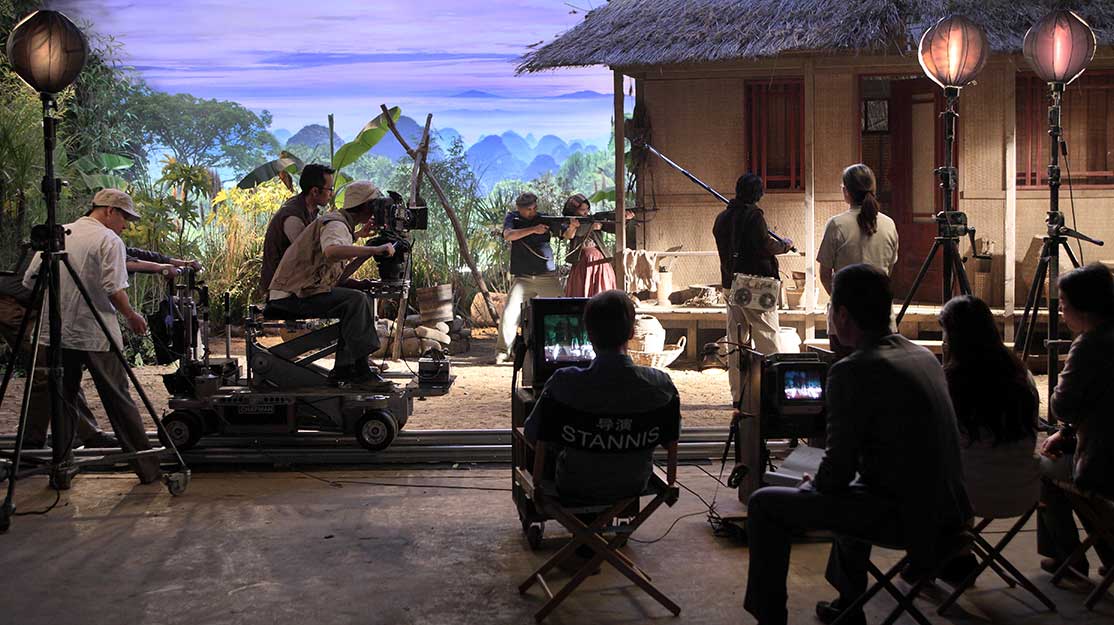 It’s a story stranger than fiction: a movie director is kidnapped by a foreign dictator and ordered to make a new version of King Kong that will bring glory to his country.

And yet the premise of French comedy drama Kim Kong is based on an unlikely true story.

The series follows Mathieu Stannis, a bitter and frustrated director who, while shooting a mindless action flick in Asia, is abducted by spies from a neighbouring country. Enraged by his country’s abysmal movie production industry, the despot wants the French filmmaker to helm a new adaptation of classic monster movie King Kong that will glorify his regime.

Faced with an inept crew, equipment that dates from the Cold War and the crazy demands of the dictator, Mathieu’s life now depends on the success of the film.

The series has a strong pedigree, coming from the firm behind political drama Baron Noir, Kwaï Productions. Armance coproduces the show for French broadcaster Arte, while FremantleMedia International distributes.

Here, producer Thomas Bourguignon from Kwaï tells DQ about the story that inspired the series and the challenges he faced in production.

What were the origins of the series?
The idea came from Simon Jablonka, the screenwriter. He told me the story of South Korean director Shin Sang-ok who was kidnapped by North Korea in the late 1970s. The leader at that time asked him to direct movies, notably a remake of Godzilla, which is called Pulgasari. We wanted to make a show about this situation, with a guy who is kidnapped by a dictator who wants him to make a movie.
We wanted to look at this kind of story and make a show not about North Korea but about dictatorship and the freedom to be creative, and how you can create when you’re trapped like this.
Our other inspiration was Misery, Stephen King’s novel, because it’s also about a guy who’s kidnapped by a fan and he has to rewrite his last book because she’s not happy with it. So there were two sources of inspiration. We wanted to make this story not about a specific regime or specific country but about every country, every regime and every type of creator. It’s really about creativity and constraints.

How do you balance the comedy and drama?
The situation is very dramatic from the beginning to the end but it’s dramatic as in movies like Gold Rush, MASH or The Ladykillers. The ground is very serious but we build several distortions that make comedy. It’s a question of life and death but we wanted to have elements where you can do nothing but laugh. The situation is always serious and asks the main character, played by Jonathan Lambert, to be very serious. So everyone around him acts strangely but he is very straight. The conflict between his straightness and the strangeness around him creates the humour.

How was the show developed with the network?
We wrote two or three pitches describing the plot, the main characters, our sources of inspiration and what we wanted to speak about. We also discussed the work of a screenwriter in the world of broadcasters. Sometimes you are confronted by a situation when the broadcaster asks you to cut things and change things. It was funny to tell to Arte we were going to talk about broadcasters – they found it very satirical. Arte is one of the most creative channels in France so we were very at ease with them. We always worked with Arte because we were sure it was not something for other broadcasters – it was a question of format and spirit. It was a new kind of comedy for Arte too because this kind of comedy isn’t on TV.

How would you describe the writing process?
There were two writers: Simon Jablonka at the beginning, and then we hired Alex Le Sec. It was written very quickly – we knew where we wanted to go and we were precise about what kind of comedy we wanted to make. The question was more about the drama because we were asking ourselves, ‘Are people going to continue to laugh if we kill someone off?’ We also wanted to be very clear that the show was not about North Korea; it’s about a fictional country. So we had to ask ourselves a lot of questions about the language the characters should speak in this place.
For a while we wanted everyone to speak in English because that’s the convention when you see an American movie, with everyone speaking English even though the action takes place in Germany or Turkey or wherever. But Arte were very clear they wanted it to be shot in French and another language because they are a Franco-German channel, so it was important for them to promote the French language.
In the end we decided to let them speak in Chinese, as the action takes place in Asia and it’s a common language for the region – but it’s not about China either. It was easy for us to say it’s filmed in Chinese and it was also easier for casting to find Chinese-speaking actors in France because we have a big community of Chinese people in Paris.
We spent a long time casting, as there are not a lot of French movies shot with Chinese actors. We were not sure we could find anyone, so we started the casting very early in the process, even before the scripts were finished, to be sure to find them in France.
Arte was excited by our casting. The majority of the actors are Chinese-speakers, but not all of them. The ones who weren’t Chinese had to learn the language phonetically and it was a long process; they had to be trained by Chinese teachers. Frédéric Chau, who plays Choi Han Sung, and Christophe Tek, who plays the dictator, are not Chinese speakers, so they had to learn everything by heart. It was difficult for them but they did it very well. It was a real challenge for them and for the director to direct in Chinese too.

How did the writers work with the director to create the look of the show?
We made a mood board with the director, Stephen Cafiero. He’s a young director; it was the first time we worked with him and the first time he worked with Arte. He had done a very good family comedy before and I saw some of the commercials he had done as well.
It was interesting for us because we had to create a whole world that doesn’t exist – the clothes, the set decoration, everything had to be invented. So he collected lots of images from lots of different regimes, from Russia to China, Korea to Cambodia, and we created the look of our regime using the mood board.
We decided to mainly shoot in the studio because it’s a movie about movies and creation, so we wanted to control the look of the movie. We shot 90% in the studio in Paris, where we built the sets.
As our country doesn’t exist, we wanted to create our own look. It was not in Cambodia, Thailand or South Korea, it was not in China. We never found the right country because they were either too modern, too old or too specific. It didn’t correspond to what we dreamed of, so we decided to make it in France in a studio. The exteriors were filmed in Thailand.
After we finished shooting, we erased everything we didn’t want in the frame, using lots of special effects to erase houses that weren’t on our mood board. That took a lot of work in post-production.

What were the biggest challenges?
In addition to the casting and the language, finding out where we were going to shoot was also challenging. At one point we thought we were going to shoot in Kazakhstan because because we found very interesting locations there and we thought we could cast people from Central Asia. [Kazakh capital] Astana is an amazing city but it is very difficult to shoot there because Kazakhstan’s president is not very democratic. We scouted across the world looking for a set for a long time before finally shooting in Paris!
Our King Kong is very small – that’s part of the problem for the director in the movie because the camera is very old, it’s shot in 16mm and the crew is very inefficient. And he has to shoot something, because the dictator has told him, ‘Either you shoot something or we shoot you.’ So the tension between the reality and what the dictator wants makes the comedy of it.

What new stories are being told in France?
This is something quite new; something that would have once been impossible. We first had this idea years ago, before Simon and I decided now would be a good time to try it. We were finishing Baron Noir and I said I would like to make a comedy about politics. It’s something that couldn’t have been done four or five years ago, but there have been many changes in France and broadcasters are more open-minded than before. They know the audience want something new, something different. They are watching series on different platforms. It’s a good time for producers and creators.