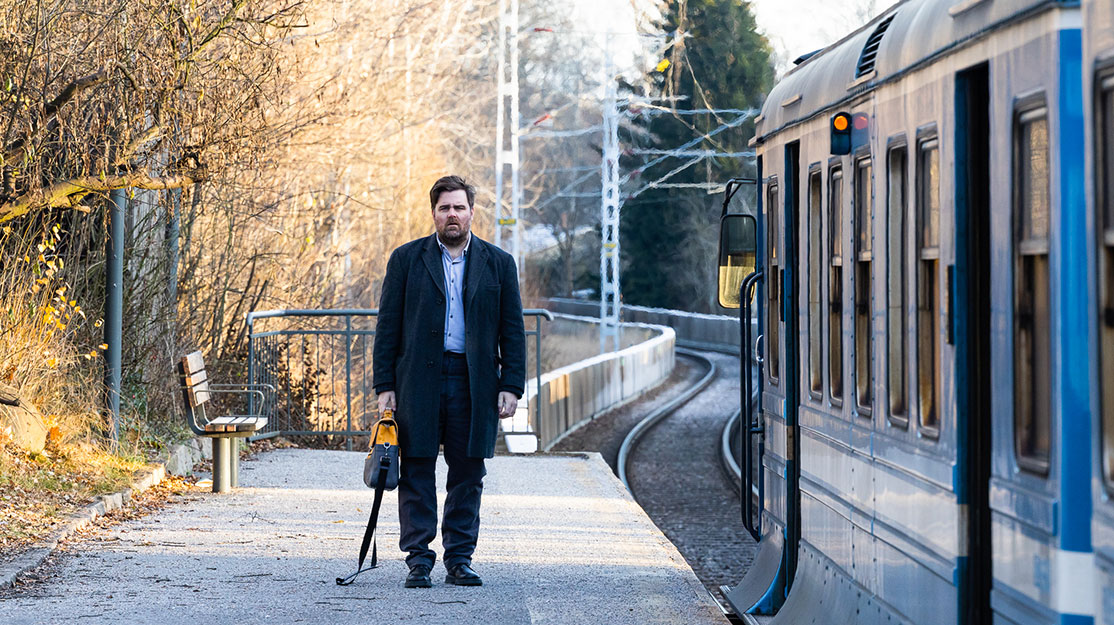 Writer Tove Eriksen Hillblom tells DQ how Swedish comedy-drama Vi i Villa takes a satirical look at middle-class life in a story about what happens when one man grows tired of his mundane existence.

With pulsating electronic beats playing in the background, a man walks down the middle of a suburban Swedish street, identikit houses with the same sloping roofs behind him, as he breaks the fourth wall to list the mundanities that have come to characterise modern life.

The rant is the opening to the darkly satirical and cynical six-part comedy-drama Vi i Villa, which introduces Anders (Mattias Nordkvist), who seemingly despairs with every aspect of life. Married to Filippa (Sanna Sundqvist) and with a daughter, he has a good job and a nice home. Everything should be fine, yet Anders is on the verge of collapse. With his dreams long gone, he has grown tired of the inane trappings of his middle-class lifestyle: couple dinners with endless talk about pointless home renovations, playing padel tennis and the shared family calendar.

Anders finds he is no longer able, nor willing, to fit into an existence he loathes. But the charade of middle-class adulthood he holds in contempt is only pulled apart when he finds out his daughter is isolated and ostracised at school. The revelation tips Anders over the edge, resulting in him harassing his neighbours.

Based on the book of the same name by Hans Koppel, the series comes from head writer Tove Eriksen Hillblom, who wrote the scripts with director Henrik Schyffert (Solsidan) and Maria Nygren (The Lawyer).

“It was such a joy to work on from the beginning,” Hillblom tells DQ. “I have been a fan of the book for so long, so I was super happy to get to be involved in the project. Working with Henrik and Maria has been so great. They’re both brilliant, funny and such nice people. We had a great time together and I’m really happy it came off the way it did.”

Hillblom was first approached about the project by Swedish producer FLX (Bonusfamiljen), which had picked up the rights to Koppel’s book.

“I was like, ‘I really want to do it.’ I love the book and I’d worked with Henrik previously and I thought he would be great to write with and also the perfect director for it,” she says. “We asked if he wanted to come on board and, luckily, he did. Maria and I have also worked together before, so then we brought her along as well. That’s how it started. Me and Henrik started on the project in December 2020 and then Maria joined shortly afterwards.”

Adaptations usually demand the writers condense or cut stories or characters to make the story fit the constraints of a television series or film. Vi i Villa provided a different challenge, however, as the book is little more than 170 pages long. That meant Hillblom’s first adaptation required her to come up with additional material.

“That’s why we introduced Anders’ workplace, because we needed something more to do six half-hours,” the writer says of the speaking agency where the protagonist works – a “dynamic” office where Anders struggles to come to terms with the hot-desking rota and clashes with his boss, Erik, who only wants to be called by his first name and promotes the benefits of a positive mindset.

“Then a lot of the book takes place inside Anders’ head. It’s a lot of his inner thoughts, so that’s why we break the fourth wall as well, because we wanted to get some of that in there. But the book has such a special tone to it; we mainly didn’t want to fuck it up and do a botch job of it. Luckily, we were able to talk to the author himself so he read our stuff, which was nerve-racking. But he really loved it and he had some good thoughts and ideas as well.”

It is those moments when Anders breaks the fourth wall that best display his cynicism about modern life. In one example, he steps out of a work meeting to pull apart the ethos behind the company – he describes his job as being a nanny for insecure celebrities – all while his colleagues remain entranced by their boss.

“It’s like being in the Matrix,” says Hillblom, whose work on Vi i Villa has earned her a nomination for the 2022 Nordisk Film & TV Fond Prize, which recognises outstanding writing on a Nordic drama series. “He’s taken the red pill and everyone else has taken the blue pill and he’s just watching it all from outside.

“His job is kind of an allegory for the time we live in, where self-fulfilment and self-improvement is not only the new religion but also an obligation. With all the possibilities in the world, you owe it to yourself to live your best life. Anders not only isn’t living his best life but is also completely out of sync with the self-affirmative messages of the 24-year old influencers he’s struggling to recruit.”

Anders also struggles in his friendships, playing padel (a racquet sport that is a mix of tennis and squash) with people he doesn’t really like.

“That is probably more common than you think,” Hillblom continues. “It’s like, ‘Why do I hang out with these people? We don’t talk.’ He’s having trouble connecting with people. That’s one of the main problems he has. But he’s accepted he has to go along with it, that’s his life now. Then he finds out his daughter is being ostracised at school and doesn’t have any friends, and that’s what makes it tip over for him. That’s when he starts taking revenge on the bullies’ parents, who are also his friends.”

Anders’ revenge begins with “childish” crimes such as scratching a car before he descends to increasingly dark depths, while his marriage also hits the buffers. Yet it is his relationship with his daughter that is at the heart of the series.

“It’s what drives him. What he’s doing is trying to save her but, at the same time, trying to save himself,” Hillblom explains. “You can feel kinship between them because she has this problem at school with friends and you can sense that maybe he’s gone through the same thing. He knows what it’s like to be that person as a child and as an adult because he holds that position now as well with his friends. They’re very alike.”

Writing the series, Hillblom, Schyffert and Nygren used Koppel’s book as a template, with Anders’ home life adding ever-increasing pressure to his work life and vice versa. Transferring the character’s inner thoughts from the book to screen – and with it much of the book’s humour – proved to be their biggest hurdle, while the writers were also cautious not to present the characters around Anders as one-dimensional, particularly when it came to Filippa, who initially seems more interested in her kitchen renovation than her husband.

“You don’t want this nagging, boring relationship that’s the go-to for having a marital crisis,” Hillblom says. “We wanted to create something where you could sense why they were once in love, to still have some of that left, but also see the spark is gone. We wanted to create a relationship that felt credible and not just make her into the villain, this nagging woman. That was something we were wary of and we tried to make her a living, breathing real person.”

With Anders being pushed to the edge as the show unfolds, how long will it be before he breaks? “As he does more things, he gets entangled in lies, so you’re left wondering when the bomb is going to go off,” Hillblom says. “But there’s definitely redemption [for Anders], and the message would be that sometimes you just have to give up and let go before you find freedom. When everything falls apart and all is lost, that’s when he’s free at last.”

Hillblom, Schyffert and Nygren worked together in a writers room for a number of weeks, structuring the plot and the main character arcs. They wrote a detailed storyline together and then went away to write the scripts, reading each other’s work and offering feedback.

“All credit to Henrik and Maria as well. It was a real team effort,” Hillblom says. “Since Henrik was also the conceptual director, we talked a lot about the visual style and how we would do it. It was a very tight collaboration and a fun one.”

Filming took place in Stockholm, though Vi i Villa – known internationally as Suburbia – was filmed in a way that meant the story doesn’t explicitly take place in the Swedish capital. The writers also wanted it to have a timeless feel in the way the characters dress, their possessions, and how the series was shot. Discovery+, which will launch the series this spring, supported the creative team’s decision to film in a 4:3 aspect ratio.

“We wanted to create our own little universe,” says Hillblom. The show’s production schedule also avoided any complications caused by Covid-19, with just a couple of cases being recorded in the final week of shooting last autumn.

Having written on series such as comedy Solsidan and Sjölyckan, Hillblom jokes that “you always sound like an asshole if you say nothing like this has ever been done before.” But in the case of Vi i Villa, “I do think it has a different tone from a lot of the things I’ve watched recently. At least that’s what we set out to try to do, something that was a little bit different from other things at the moment.”

Hillblom and Nygren are now in pre-production on a new series they have created and written together. Described as a darkly funny dramedy, it deals with the life expectations on women through the lens of fertility and motherhood.

“It’ll be super funny and super sad – my favourite combo!” says Hillblom, who also finds inspiration in exploring the “glitch” between who we are as people and who we want to be.

“That area is really interesting because there’s so much shame and deceit trying to cover up who you really are and who you’re trying to be. There’s a lot of tragedy and comedy in trying to be someone you’re not in so many ways. That’s a theme you can make purely comedic or super dramatic – when you’re trying to win at life but it’s impossible and you’re never really happy because you’re always comparing yourself to other people and trying to be a different version of yourself.”

Anders is certainly responsible for a lot of the tragedy in his life, having found himself completely adrift from the life he once hoped to lead. “That’s what’s so scary. You make these little choices all the time, or just let things happen, and then you find yourself in a place you don’t want to be,” Hillblom says. “But in the series, he definitely makes very poor decisions all the time. He definitely trips himself up.”