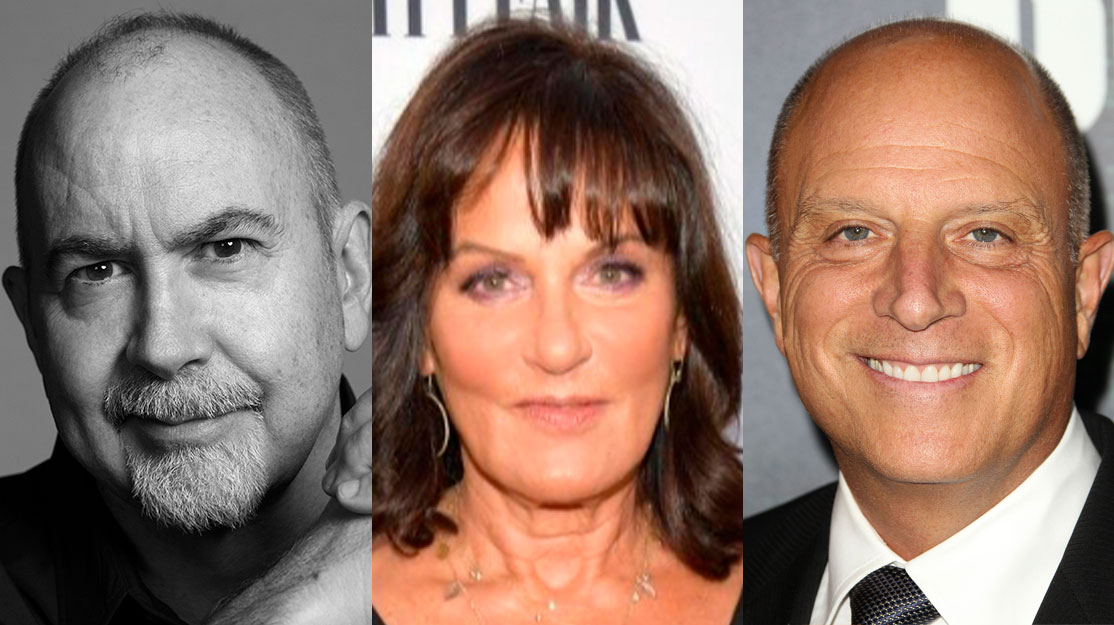 The Sopranos and Boardwalk Empire writer Terence Winter joins producers Sherry Marsh and Chris Albrecht (pictured left to right above) to talk about their upcoming project Tokyo Underworld, based on the true story of an American soldier who becomes a gangland leader in post-Second World War Japan.

Award-winning writer Terence Winter is best known for his work on The Sopranos and as the creator of Boardwalk Empire, two acclaimed HBO series that delve into the world of mobsters – the former in 1990s New Jersey and the latter during the Prohibition era of the 1920s.

For his next project, Winter is again exploring the world of gangland mobs, but this time the action shifts to Japan in the aftermath of the Second World War.

Based on the book by Robert Whiting, Tokyo Underworld tells the true story of Nick Zapetti, an Italian-American GI from the Bronx who relocated to Japan in the aftermath of the Hiroshima bombing in 1945 to become the undisputed king of the black market. He opened the first pizzeria in Japan and also went on to become a diamond thief and professional wrestling promoter.

For the series, which is in early development, Winter has reunited with former HBO chief Chris Albrecht, who is now running production company Legendary Global, and executive producer Sherry Marsh (Vikings, Pose).

“Sherry and I were looking for something to do together and she said, ‘Have you ever heard of Tokyo Underworld?’” Winter recalls. “I’ve been obsessed with this forever, and we ended up bringing Chris into the loop. He read it immediately and saw exactly what we saw.

“In the aftermath of the Second World War, the US began an occupation of Japan where, for the first time in history, a conquering army helped rebuild the city and country of their defeated foe. Thousands of American soldiers were sent to Japan and one of these people was a low-level wise guy gangster from the Bronx, a young man named Nick Zapetti. He got into some trouble in the Bronx, needed to get out of town and he thought, ‘What better way to get out of town than to join the Marines? They’ll send me somewhere far away, like Pittsburgh.’ Well, Pittsburgh turned out to be Tokyo.”

With goods being shipped into the country every day, Zapetti saw an opportunity to make money in the black market and then teamed up with some like-minded soldiers and members of the local Yakuza crime organisations to run the black market in Tokyo.

“He went on to basically become one of the most successful and wealthy gangsters in Japanese history,” Winter explains. “He never went back to the US. The most amazing thing about this story is it’s true. It’s really all in my sweet spot: gangsters, both American and Japanese, low-level crime and history, which I love and I incorporated so much in Boardwalk Empire. It’s an opportunity to tell a story that most people don’t even know about and it’s a fresh look at gangsters, from the Yakuza to the Mafia in New York and everything in between.”

Albrecht launched Legendary Global – a joint venture with Legendary Entertainment – at the end of 2019 to develop and produce premium international scripted television, and Tokyo Underworld proved to be the perfect “statement show” with which to begin. The company is also behind an adaptation of Charles Dickens’ A Tale of Two Cities with His Dark Materials writer Jack Thorne.

“Having been involved in several Second World War projects and several Terry Winter projects, it seemed like a perfect opportunity,” he says. “If this story wasn’t true, you couldn’t make it up. No one would believe it. And to have a story that took place mostly in Japan, but having a real US-centric piece to it, I saw an opportunity to have something that really fit our brand with an A-list writer and a fantastic, successful producer in Sherry, who I trusted. It was kismet. Once in a while, you get lucky.”

This isn’t the first time Whiting’s book has been primed for adaptation, with previous attempts to turn it into a film having failed to come to fruition. “The book has been in and out of people’s hands. Lots of people have tried to do an adaptation and when I found it, I called Terry and it was perfect,” Marsh says.

“I love to tell stories that have some global import and also stories you just haven’t seen. I also like working with people I respect and I like. Terry, Chris and I go back a long way and it just felt like it was a perfect combination, a perfect storm. This book has the ability to show both a Japanese perspective and a US perspective and really be global. It’s fun, it’s got some heart and humour, and it’s true.”

“People tried to crack it as a feature, but this story is too big to be contained in a two-hour format,” Winter says. “The beauty of doing a series is you can dig down so deep into characters over the course of many episodes that you just couldn’t possibly do it as a two-hour feature. It’s really an incredible story about rebuilding hope. It’s got comedy, it’s got action, violence and it’s got heart. It really has checked off every box that I look for, not only as a writer but as a viewer. If I wasn’t involved in the show, I would watch it.”

“Timing is everything,” adds Marsh. “ When people tried to do an adaptation of this book as a movie, it just didn’t do it justice. The story was bigger than that. There’s also an appetite [now] for more international fare that maybe wasn’t around earlier. It certainly is a perfect storm and the timing is right. I really couldn’t be more excited about it. We’ve had tons of incoming calls about it.”

When it comes to adapting any book for the screen, Winter says he starts with character. And in Zapetti, the writer says he found someone with whom he has a few things in common.

“Not the horrible gangster ways,” he jokes, “but the ambition. He was from Brooklyn; I grew up in Brooklyn. I understood that whole idea of getting in trouble, going somewhere else, trying to rebuild your life and just looking at the world as your oyster, as a big opportunity and transplanting that New York wise-guy attitude into a whole new place and culture.

“Zapetti became the catalyst for the rest of the story, and then it’s really a question of building the world around him, which is absolutely fascinating – the various characters he met, not only the other soldiers, but people in various military ranks all the way up to [army general] Douglas MacArthur. And then the Yakuza characters are incredible.It’s just such an embarrassment of riches, but it all starts with that guy.”

Speaking during Content London’s Hot Properties: International Drama session, the trio say they are keen to work with Japanese partners to realise the series, which Marsh says could be in production next summer. Winter has already written the first script and a series outline.

“This is the story of two cultures that are coming together and discovering each other at the same time as some of these characters,” Albrecht says. “What we want to do is make sure this isn’t told from just a Western point of view. It’s been a big part of our work to investigate what the opportunities might be to have partners in Japan and in Asia because we truly see it as something that sits across all sides of the story. We want to make sure it’s authentic and we want to make sure it gets seen around the world, because it’s not just an American story, it’s not just a Japanese story – it’s a world story.”

Winter says he catches himself thinking about how certain scenes might be filmed, even when he’s not working on the scripts, and that’s just one of the reasons he says he is more excited about this project than anything else he has been involved with recently.

“One of the exciting things for me is it’s a different culture. Gangsters are very similar no matter what language they speak, but the Yakuza always has this mystery and exoticism about it,” he says. “When you mix the two cultures – the psychology of the Italian-American Mafioso combined with the Japanese Yakuza – it’s a much richer palette for me. It’s a look from our perspective into a world that, up until this point, has been really hidden from us, not only the Yakuza but Japanese culture in general, particularly at that time.

“Obviously, in the decades since, we’ve become great allies with Japan, but there could not have been two more opposite cultures and two more bitter rivals than the US and Japan in 1946. The fact those two groups of people came together to create something extraordinary is pretty interesting.”