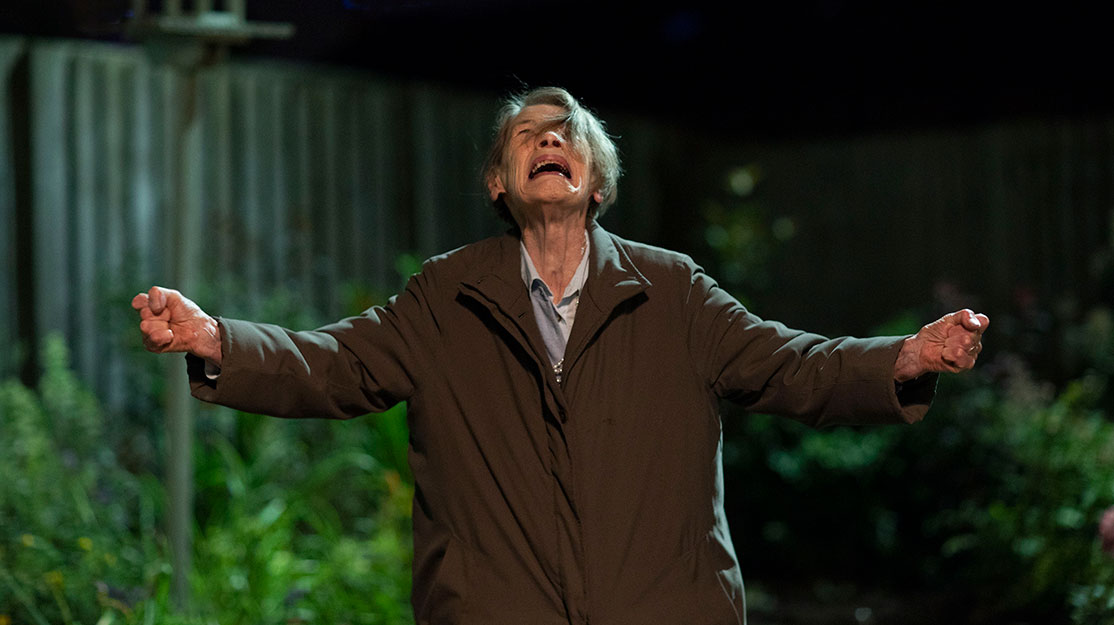 BBC single drama Elizabeth is Missing offers viewers a gripping mystery as well as profound insight into how living with dementia affects one woman and her family, as writer Andrea Gibb and executive producer Sarah Brown explain.

In her bestselling novel Elizabeth is Missing, Emma Healey poignantly takes readers inside the mind of a person living with dementia, as main character Maud sets out to investigate the fate of her missing friend.

For a feature-length adaptation commissioned by BBC1, the challenge for screenwriter Andrea Gibb was to turn Maud’s inner thoughts into external expressions and actions, which often cause the past and present to collide.

“She’s an unreliable narrator. That’s the beauty of the book,” Gibb tells DQ. “Emma presents Alzheimer’s from the inside, which is what makes it so special, because quite often you read books about dementia or Alzheimer’s disease and they are from the point of view of the carer or the people who are on the outside. But this book is totally subjective. In that sense, you are in her head. You are with Maud and you sense her frustration.

“From a dramatist’s point of view, you’ve got to work out how you’re going to show that. So there were a lot of challenges in coming to this particular book, which was exciting but also daunting.”

Gibb first read the novel before it was published in 2014, when STV Productions asked her to consider adapting it for television. She had previously written about dementia in her short film Golden Wedding, having seen close relatives live with the disease, and later discovered her brother’s friend was Healey’s uncle, providing a helpful dose of serendipity that solidified her connection to the material.

Unfolding entirely from Maud’s perspective, the story combines mystery with an exploration of her dementia as she sets out to discover what has happened to Elizabeth. But with her memory deteriorating, the past and present collide as time runs out for her to uncover the truth.

Maud is played by Glenda Jackson, in a role that marks the actor’s return to the screen after 25 years, having spent the intervening years in politics.

“Nothing can happen without her seeing it, witnessing it or overhearing it, so we never leave Maud,” Gibb says. “I’ve even got her inhabiting her own memories. So quite often, people from her past, they just appear and she just talks to them. My dad had dementia and, at the end, he was in a care home and he honestly believed he was in Africa. He lived and worked in Africa when he was younger and he believed in that care room that he was in Africa. Then when I’d go and see him, I was in Africa with him. So I was inhabiting his past and his present, and that’s what I wanted [for Maud]. I wanted to get that sense of it so that we’re inside the disease.”

But while single dramas commissioned by the BBC tend to be issue-led, such as last year’s award-winning Care, Gibb says Elizabeth is Missing doesn’t aim for social realism, with flashbacks offering the writer some dramatic licence.

That said, “you can’t avoid the issue,” she says. “You see how people react to her and the toll it’s having on the family. It’s just not spelled out in the way of some other dramas, whose objective is to highlight problems with social care. Our intent and objective was to show how it must feel to be in this situation. That’s what Emma does in the book. How would you feel if you know something isn’t right but you can’t articulate what it is and you can’t get anyone to listen to you because they all think you’ve lost your marbles? I’m hoping that will shine a light on the issue but in a more oblique way, rather than us hitting viewers over the head with statistics about social care.

“Other dramatists set out to do it specifically, like Jimmy McGovern [Care], Ken Loach [I, Daniel Blake] or Paul Laverty [Sweet Sixteen]. They set out to specifically shine a light on a particular issue and they do it brilliantly. It’s always got heart and the characters are always totally authentic and believable. I hope we are also authentic, believable and true but we’re just doing it from a slightly different angle.”

Having most recently adapted Arthur Ransome’s novel Swallows and Amazons for the big screen, Gibb says her writing process for Elizabeth is Missing followed a similar path, which amounted to reading the novel numerous times before working out which scenes, characters and moments were indispensable to the story.

“A book is not a film. A film is very external, whereas a book is very internal,” she explains. “When you read a book, you’re in a relationship with that book, you’re running your own film in your head as you read it. Whereas when I put it on screen, it’s our film – it’s a total collaboration. I worked very closely with my script editor, Claire Armspach, and STV Productions’ head of drama Sarah Brown, who was very heavily involved in how we tell the story, with feedback. Development is a constant process of writing, rewriting, discussion and more rewriting. So you are working off a lot of input, which can be amazing if it’s good, and I was really lucky in that sense.”

Many years in development, the project was initially conceived as a three-part miniseries. But without the natural hooks needed to bring viewers back for each episode, BBC drama head Piers Wenger suggested the story might better suit a single film.

“When he said that, it made total sense to me but sometimes you go through development to find where you should be at the end,” Gibb continues. “So you can go up a lot of wrong paths and as long as you come back and you find the right one, then it’s all been worth it. This is much more of a single because it’s a single issue. Maud’s the protagonist who has a ‘journey,’ you follow it from beginning to end and, actually, you are in her head. The only thing that matters is how you tell her story.”

With the novel achieving critical and popular acclaim, Brown says she understood the weight of responsibility that came with not only adapting a bestselling book but ensuring the film was as truthful as possible to the experience of those who live with dementia.

“The unique thing about the story is we’re telling the story of dementia from the point of view of someone with it. We wanted the audience to gain some insight into having that condition,” she says. “It was a process in terms of writing and filming a lot of scenes but, in the shooting and editing, it became clear how this was Maud’s journey. She informed every decision we made.”

The production sought advice from Dementia UK over how to portray the condition, with an advisor consulting during the script phase and also speaking with Jackson about her depiction. “No one dementia experience is exactly the same but, in broad terms, we wanted to be as truthful as possible,” Brown notes.

Gibb also felt that weight of responsibility. “I needed the audience to understand how she felt in every moment, what every memory stirred up in her and emotionally how she got from one moment to the next,” she explains. “Memory isn’t fixed and I really wanted to create the sense she was unpicking something in an urgent way before her mind went completely and she couldn’t remember anything. In dramatic terms, there’s a ticking clock. She’s desperate to try to put the puzzle together to get some kind of closure, even though she’ll forget instantly and it will start up again. But somehow she manages to come to a conclusion, and that’s her triumph.”

Elizabeth is Missing was shot predominantly in Glasgow over five weeks, and Jackson was on set for all but two shooting days alongside a cast that also includes Helen Behan as Helen, Sophie Rundle (Sukey) and Maggie Steed (Elizabeth). Liv Hill plays a young Maud, Nell Williams is Katy, Mark Stanley is Frank, Sam Hazeldine is Tom, Neil Pendleton is Douglas and Stuart McQuarrie is Peter.

Aisling Walsh (Room at the Top) directs, with Brown, Gibb and Gaynor Holmes executive producing. The producer is Chrissy Skinns and the show, debuting this Sunday on BBC1, is distributed by NBCUniversal Global Distribution.

Claiming Elizabeth is Missing is “one of the one of the best things I’ve ever worked on,” Gibb says the project has made her realise that the UK’s health system is a “time bomb” when it comes to caring for people in old age and those with dementia and Alzheimer’s disease. “I learned so much about how we deal with our old people and how lonely and isolated they can be,” the writer says. “We need to take better care of our old people generally in this society. Emma’s book really makes you feel that because you’re in Maud’s head, so I worked really hard to try to bring that into the adaptation, without using a voiceover or anything like that, because I wanted her to reveal herself to us as we go along.

“We need to have a proper look at our care system and how we how deal with people. There are so many people who are going to develop [dementia] and we have an ageing population. We are sitting on a time bomb and it needs it needs some proper strategic thinking from our alleged politicians.”

Brown adds that the “genius” of the novel lies in its use of two mysteries as a way to bring viewers to Maud’s condition. “They’re compelling in their own right but they’re also there to highlight the disease. We didn’t set out to make a campaigning film but people are seeing it as a dementia film. There’s a conversation to be had around care and this will be something that contributes to that debate.”