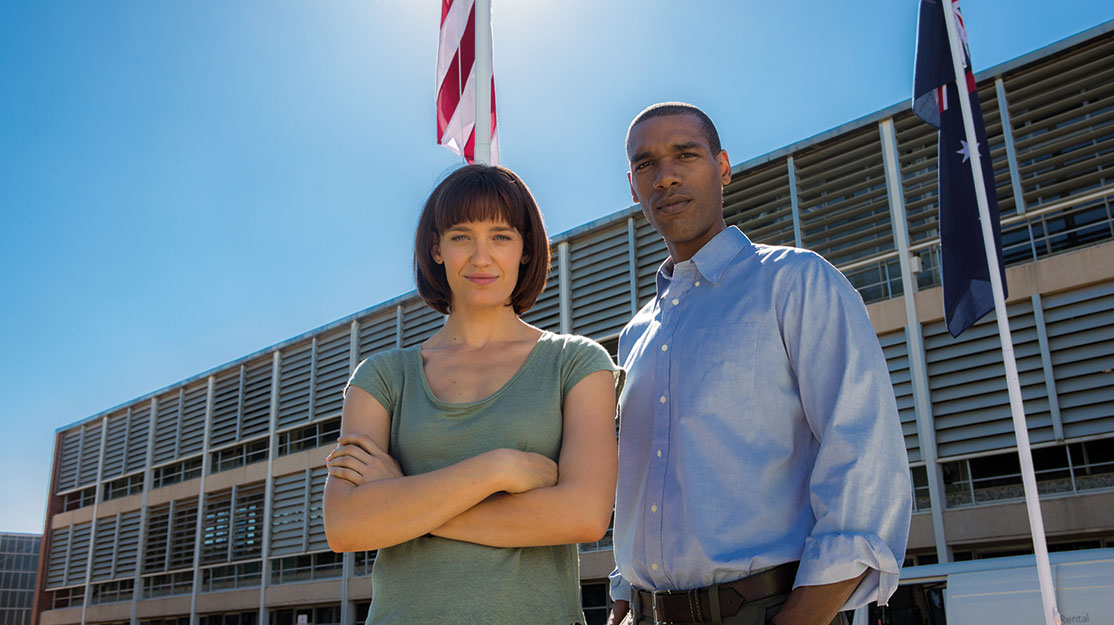 The creators of Screentime miniseries Pine Gap reveal how they recreated the eponymous Australian/US defence base and explain why it makes the perfect backdrop for drama.

Australian writer-producers Greg Haddrick and Felicity Packard knew they would face at least one major challenge when they pitched a miniseries set at the Pine Gap defence facility in the Outback to US and international broadcasters.

The problem? That few Americans are even aware of the existence of the joint US/Australian base, let alone its pivotal role in collecting and sharing intelligence on sensitive matters including terrorism, arms control and targets for missiles and other weapons of mass destruction.

But Netflix was an obvious choice as the copro partner with Australian pubcaster the ABC for Pine Gap, a six-part spy thriller produced by Banijay-owned Screentime Australia that launched on October 14.

Haddrick and Packard hatched the idea when ABC executives asked what they planned to do after ANZAC Girls, a 2014 miniseries that centred on the Australian and New Zealand nurses who served at Gallipoli and the Western Front in the First World War. As showrunner, Haddrick thought Pine Gap would be a great setting for a thriller that deals with the growing tensions between China, the US and Australia, particularly in the Asia-Pacific region. Packard, who lives in Oz capital Canberra, knew a lot of people who had worked at the Australian Signals Directorate (ASD), a government foreign intelligence-collection agency.

Funded by the ABC, they started developing the screenplay with producer Lisa Scott, a long-time collaborator. David Rosenberg, an American who lives in Australia and worked on the operations floor at Pine Gap for years, provided plenty of non-classified information.

Based on her conversations with Rosenberg and former ASD personnel, Packard was keen to explore the complexity of relationships involving people in the intelligence services who are not allowed to discuss their job with their partner.

“Greg and I were entranced by the idea that you fall in love with somebody from a different country, you have both signed secrecy agreements and you have a fundamental loyalty to your own country,” says Packard. “What if you can’t tell your partner everything? And what if you work on the base but you partner doesn’t and you can’t talk about your work at all? What sort of stress does that level of secrecy place on relationships?”

Given the scale of the production, which involved location shooting in the Northern Territory and the construction of the vast operations floor in the Adelaide studios managed by the South Australian Film Corp, the producers knew they needed a copro partner.

Elizabeth Bradley, Netflix’s former VP of content, was a fan of the duo’s previous work including ANZAC Girls, Janet King, Cloudstreet and the Underbelly crime franchise. She contacted Haddrick to ask if he had any projects he thought might interest the streaming platform, so he sent her the first two scripts. That was followed by three long phone conversations as Haddrick explained the role of the base and how intelligence is shared between the two countries. He also mapped out the personal stories of the Americans and Aussies who work at the base and the issues of trust, loyalty and betrayal. Netflix signed on a year ago and the first two episodes will have their world premiere at the Adelaide Film Festival this October.

“There was a lot of interest in the idea from many American end-users. It was a matter of finding the right partner who was willing to take a risk on a show being made 12,000 miles away,” says Haddrick, who has since left Screentime, where he spent 17 years as head of drama, to launch his own banner, Rainfall Creations. ‘Rainfall’ was the CIA’s code name for Pine Gap.

Mat King, an Aussie director who helmed three seasons of Law & Order: UK and episodes of Doctor Who and DCI Banks, was entrusted with all six episodes. King, who grew up in Adelaide and was aware of the Pine Gap base, worked with Packard and Haddrick on Underbelly: Razor in 2011 and had been keen to collaborate with them again. “I had to pitch my vision of the show to Netflix; they were happy and approved me as the director,” King says. “The biggest part of my pitch is that I saw this as a six-hour film with six chapters.”

In casting, Netflix execs made it clear they did not necessarily want marquee names, asking the producers to cast a wide net to ensure they got the right actors. The US-born, UK-based Parker Sawyers plays Gus Thompson, the US mission director, who is forced to question where his allegiance lies when he begins a romance with Jasmina Delic (Tess Haubrich), the Australian communications intelligence team leader.

Sawyers, who earned rave reviews for his turn as a young Barack Obama in 2016 movie Southside with You, relished playing a character whose skin colour is incidental and a story that has nothing to do with the issue of race. His main challenge was learning 66 pages of dialogue, much of it in the lingo of the intelligence world. He had worked for the Republican governor of Indiana, as a model and for a lobbying firm in London before deciding, aged 28, to pursue his long-held ambition of becoming an actor.

Steve Toussaint, a Brit of Barbadian descent, plays facility chief Ethan James, a former US Air Force fighter pilot whose job has taken a toll on his personal life. “These people are doing incredibly important jobs; the weight of the world may not be on their shoulders but it’s close to it,” says Toussaint.

The actor, who was a regular in ITV’s Lewis and had recurring roles in Sky Atlantic’s Fortitude and Epix’s Berlin Station, was attracted by the script and by the series’ mixture of physical action and cerebral interplay. He sees the show as highly topical, observing: “It’s about the shifting nature of geopolitics as the US comes to terms with no longer being the dominant superpower due to the emergence of China.”

The set of the operations floor was the largest that any of the key creatives had experienced, including 168 computers, a mezzanine level and multiple corridors. The executive offices and a cafeteria were built in a warehouse at the former General Motors factory in suburban Elizabeth. “We could shoot wide shots inside our world, almost interior landscapes, which gave a sense of scale to what was happening in the base,” King says.

FX house KOJO digitally created the Pine Gap facility and plonked it in a valley west of Alice Springs, which was filmed by drones. Geoffrey Hall (ANZAC Girls, Deadline Gallipoli, Wolf Creek) was the DoP. Hall and King adopted a non-traditional approach to TV drama by thoughtfully framing shots and aiming for a cinematic tone.

Knowing that Netflix viewers often binge-watch shows, consuming three or more episodes in one sitting, the producers and King edited the end of each instalment with a hook or a question mark to encourage viewers to continue to the next.

Packard wrote episodes one, four and five, with Haddrick penning the rest. The lengthy development was an advantage. “Starting pre-production with six very advanced scripts does not happen very often in Australian television,” says producer Lisa Scott. “There are many times you rush into production. This time, Felicity and Greg wrote double-digit drafts of episodes one and two.

“Producing is hard and it’s only getting harder because you have to stretch the dollars as far as you can, and you put everything on screen. There is no right way to do what we do. A lot of what we do is subjective. Netflix’s financial support enabled us to realise the vision that Greg and Felicity wanted from day one. When we started with Netflix, we wanted to prove that Australian producers could produce world-class entertainment – and hopefully we have done that.”

While the climactic episode resolves the key plotlines, Haddrick says: “There are enough tantalising loose ends that it could easily go to a second season. Viewers can look forward to a fast-paced, gripping and compelling story told in an environment that really hasn’t been explored before. I think it’s the best thing I’ve done.”