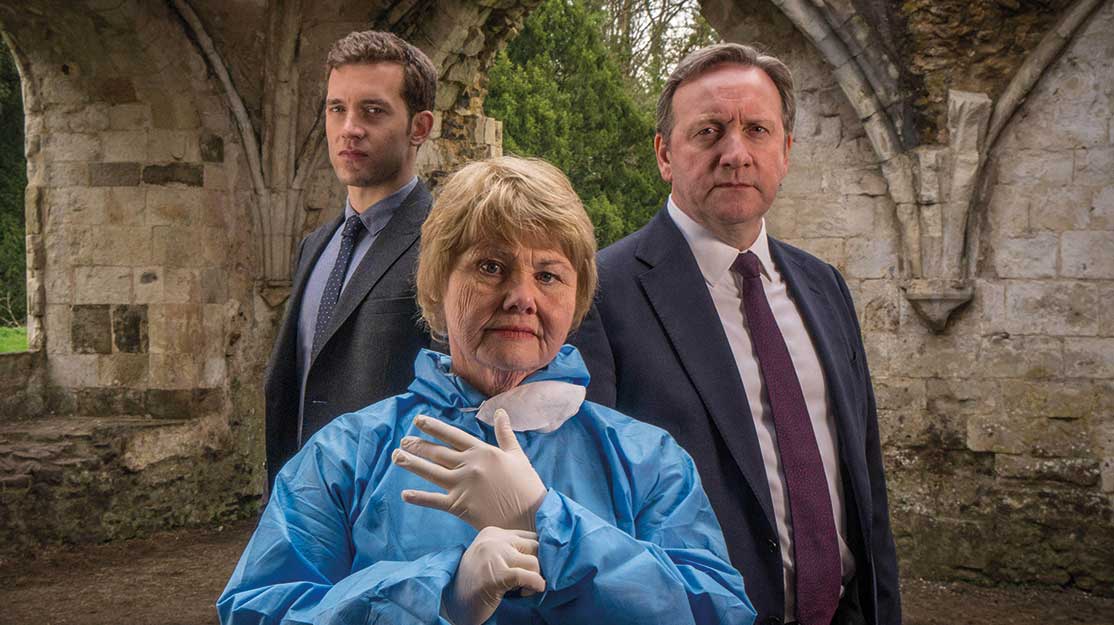 Airing in more than 200 countries, Midsomer Murders is celebrating its 20th season on television this year. DQ visits the set of the popular crime drama, which boasts some of the strangest deaths on screen.

At its heart, Midsomer Murders can be described as a traditional murder mystery – but there’s nothing orthodox about the way the show’s plethora of victims meet their grisly end. The long-running British drama, which ushers in a remarkable 20th season in 2018, has seen victims drown in a cauldron of soup, electrocuted while riding an exercise bike and poisoned by a tropical frog.

Even more bizarre was the death of a woman crushed by a wheel of cheese, while another killing was the work of a headless horseman. One man died after being hit by bottles of vintage wine while he was pinned to the ground as a human target.

But that’s part of the charm of the long-running series, which delicately blends stories of serious crimes and its light-hearted tone to concoct an antidote to the darker, more brutal crime series on television.

“My personal favourite was [season 16’s] Wild Harvest, where a man is tied to a tree, covered in truffle oil and eaten alive by wild boar,” reveals leading actor Neil Dudgeon, who has played DCI John Barnaby for the last seven years. “It’s not the sort of thing where you think, ‘That could have been me.’ It’s a really twisted and bizarre way of killing someone but it’s kind of fun. We’ve never gone in with people getting bashed over the head with a shovel. Mostly the writers try to come up with the most exotic deaths they can, which I think is part of the fun of the show.”

It is a sunny June 2017 day at a secluded building, surrounded by woods, on the outskirts of north-west London when DQ finds the Midsomer cast and crew preparing to shoot the final scenes of season 20’s third episode, Drawing Dead, which centres on a comic-book convention featuring scores of new superheroes imagined by writer Jeff Povey. There are no capes or masks here, however, as DCI Barnaby and DS Jamie Winter (played by Nick Hendrix) have joined new pathologist Dr Fleur Perkins (Annette Badland) in the lab to discuss her forensic findings after examining the latest victim’s body.

“We generally finish in the police station and mortuary, which is a good thing because it usually just involves me and Nick explaining the plot to each other,” Dudgeon jokes. “On odd occasions, we’ve had to do the police station stuff at the beginning of the episode, which is a bit of a car crash because we haven’t been to any of the locations, we haven’t seen any of the murder scene or met the other characters. We’re just explaining something we’ve barely got a handle on. So doing it at the end is much preferred.

“We’ve spent most of the last two weeks on a lovely village green with a big marquee and various stalls and stands with extras all dressed up as new superheroes we’ve invented for the purpose of the show. All these people come to this village where they celebrate all things comics and this terrible thing happens. Then while we’re on the trail, somebody else bites the dust.”

Dudgeon describes Midsomer, set in the fictional eponymous county, as a police show that’s less about the police and more about the characters the detectives meet during their investigation, each with something to hide. “Everybody’s got secrets but only one person is lying about the fact they’re actually the murderer, and that feeds Barnaby’s interest in all of the characters,” the actor explains. “I’ve always liked that the police aren’t very interesting. [Creator] Betty Willingale’s idea was for an antidote to the police shows of the time where it was about having an interesting policeman, whereas this is not – he’s not an interesting policeman, he’s happily married, goes out to work and investigates murders, then goes home and puts his feet up.”

Dudgeon joined the series to replace original star John Nettles, who played DCI Tom Barnaby (John Barnaby’s cousin, owing to the fact the series is known as Inspector Barnaby in many overseas territories) for 13 seasons. Between them, they have worked alongside several partners, with Hendrix joining the main cast ahead of season 19. His move to Midsomer came as the actor sought to step into a leading role, having previously appeared in The Crown and Marcella.

“It’s a fun job and every episode’s different – every four weeks you get a new group of actors, a new story, locations and fun things to do,” Hendrix says. “It has to have jeopardy but, whereas in a gritty drama I’d jump out of the way of something, hit my head and knock myself out, in this I’m face-down in manure. This particular season is quite a lot funnier and the producers have encouraged us to embrace that tongue-in-cheek humour a little bit more. There is a line, because it’s still murder, it’s still crime, but they’ve embraced that fun side of it, which is what I think people love about the show.”

For executive producer Jonathan Fisher, who joined the Bentley Productions show in September 2016, Midsomer Murders is underscored by its great sense of theatricality, best seen in the various deaths invented for the show. He’s also keen to keep pushing the idiosyncrasies of the characters that appear in each episode to create an eccentric, larger-than-life ensemble.

Early in the development of each episode, Fisher will meet with the writer to discuss story ideas, usually beginning with the world the episode is set in. As well as a comic-book convention, season 20’s six episodes include a monastery that has been converted into a brewery, a chocolatier and somewhere the producer describes as a cross between a circus and a pig farm.

“We like to have a specific world per episode,” he says. “We try not to repeat where possible and we’ve got Ian Strachan, the coproducer who has been on the show for 18 years, who’s fantastic at identifying what we’ve done before. He’s a great source of knowledge for us.”

But that’s just the starting point for creating what Fisher stresses are very tautly plotted murder mysteries, each with nine or 10 potential suspects. “It’s harder than people think to get that right because they’ve all got to stay in play until the denouement at the end, so you can’t just eliminate one by one. Then we try to add some characteristic Midsomer flair and colour where possible.”

With the trend for gritty and often brutally violent crime dramas on screen, it’s Midsomer that provides a “refreshing” alternative, Fisher believes, describing the show in terms of its escapist quality and sense of joy. “The crime drama genre is pretty crowded at the moment and we’re really set apart from that in the fun of what we do,” he continues. “At all times, murders are taking place but the thing about Midsomer is those murders can be fantastically theatrical and elaborate, and that’s something we pride ourselves on.

“I can reveal one death from season 20 – we’re going to do our first ever ‘death by chocolate.’ So our poor victim is going to have his head encased in chocolate and made to look like an Easter egg, which I think will be really good fun. The challenge for me is to get the deaths as colourful and imaginative as possible, but everything has to be underscored by an emotional truth. So we allow our killers to kill in these theatrical ways but, ultimately, come the denouement at the end, the motive has to have some emotional truth to it.”

As Dr Perkins, Badland joins the cast this season playing a pathologist she describes as a strong lady who knows her own mind and enjoys winding up DCI Barnaby and DS Winter. But she admits that she tries not to get too attached to any of the characters or guest cast members, as she doesn’t usually see them on set unless they’ve met an untimely end.

“I meet characters at the read through and then they’re dead by the time I see them again,” she deadpans. “So they’re lying on a slab or somewhere uncomfortable in the countryside. Usually they’re cold, tired, grumpy or laughing, or it’s a double for the body. That is odd because I come in and do my four or five days in a [shooting] block but the crime’s happened, so you don’t have an emotional journey. You don’t have those connections. You come in and work – she works it out.”

Fleur’s arrival is a step change for Midsomer, with Fisher explaining that those behind the show wanted to move away from the romantic frisson between previous pathologists and the detective duo, instead casting a more established actress to shake-up proceedings. “She’s got some fantastic, acerbic putdowns so I think she’s going to bring a new energy to the show,” he says of Badland’s arrival. “The scenes we’ve shot with her have been fantastic, a real treat.”

The series will have run for 122 episodes by the end of season 20, with 333 deaths up to the end of season 19 (the producers wouldn’t confirm how many more there will be this season). Nevertheless, the show’s longevity continues to surprise Dudgeon, who first signed up not knowing how many episodes he would be involved in. “It’s all got a bit out of control and it goes on and on,” he says. “They keep saying they want more and I’m powerless to resist.”

Similarly, Fisher believes there’s no reason why Midsomer can’t run for another 20 years. “The thing about Midsomer is it has a timeless quality to it, so while new trends will come and go, Midsomer remains constant and at the top of its game,” he says. “The fans love it and keep coming back to it. People do forget Midsomer is a relatively large county, so the death rate is not ridiculously high, but obviously that’s the running joke and we’re fine with that. We’ve far from run out of murder methods. There’s plenty left to go.”