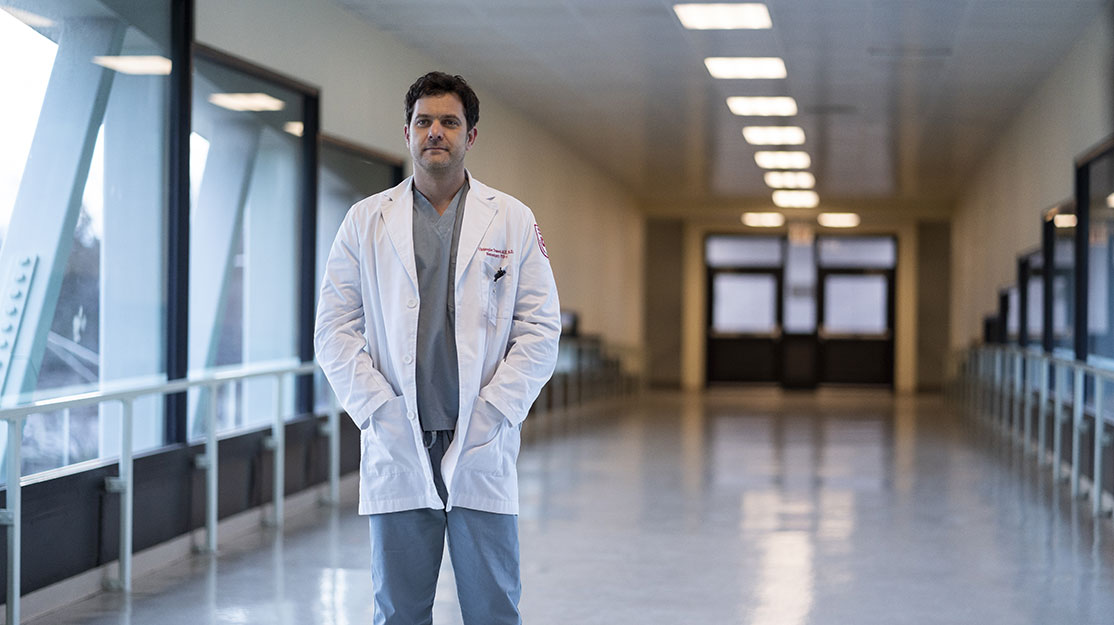 Dr Death showrunner Patrick Macmanus opens up about making this true crime drama, based on the podcast of the same name, which focuses on a surgeon accused of maiming and killing his patients.

US writer and producer Patrick Macmanus first visited Savannah, Georgia, in 2017 when he and his family took a break from life in Washington DC. He’s now back in town completing prep work for The Girl from Plainville, an upcoming Hulu series he has written with Liz Hannah, based on an Esquire article about the so-called “texting suicide case” around the death of 18-year-old Conrad Roy in 2014.

“It’s a gorgeous city, the food is delicious and the houses are stunning – and I’m a big fan of cemeteries,” he says. “I have a weird obsession with cemeteries, and they have some pretty cool cemeteries here too.”

On the day he speaks to DQ, however, Macmanus is preparing to fly cross-country to LA for the premiere of his latest project, streamer Peacock’s original limited series Dr Death. Based on the Wondery podcast of the same name, the true crime drama focuses on Dr Christopher Duntsch, a rising star in the Dallas medical community who was accused of maiming or killing more than 30 patients. In 2017, Duntsch was handed a life sentence after being convicted of injuring one patient during an operation that left her in a wheelchair.

Young, charismatic and ostensibly brilliant, Duntsch (played by Joshua Jackson in the show) had been building a flourishing neurosurgery practice. But everything changed when patients entering his operating room for complex but routine spinal surgery began ending up maimed or, in two cases, even killed.

The dramatisation follows events as Duntsch’s fellow physicians, neurosurgeon Robert Henderson (Alec Baldwin) and vascular surgeon Randall Kirby (Christian Slater), as well as Dallas prosecutor Michelle Shughart (AnnaSophia Robb), uncover the link between Duntsch and his victims and set out to stop him.

Series showrunner Macmanus describes Dr Death as a “ready-made package” that combined an extraordinary story, which is based on true events, with a complex “bad guy” in Duntsch – someone created not only by nature but by nurture, thanks to a system that enabled and empowered him to get away with his crimes for so long.

The inclusion of two very unlikely heroes in Henderson and Kirby, who effectively take up the traditional role of the cops out to catch the villain, added a unique element to this true crime story – two people out to apprehend a criminal within their own ranks – and the addition of a young, driven and talented district attorney in Shughart meant Dr Death was “the perfect story of storytelling.”

“If it were a true crime story in which it were cops and robbers, never in a million years would I have taken the project. But this was just so compelling across the board,” Macmanus says. “It would have been foolish for me not to jump in the pool. But it wasn’t like they just handed it to me. There were a couple of other brilliant writers who were up for the gig and I was just lucky enough to pull one over on my producing partners and they gave me a shot.”

The eight-part series opens as Henderson and Kirby first uncover the link between Duntsch and a pattern of patients who, in the space of a week, were left permanently injured or dead after Duntsch operated on them. The show’s non-linear narrative then opens up further from episode two, with viewers following Henderson and Kirby’s investigation in the present day while simultaneously following Duntsch’s rise through the medical ranks to understand how and why he committed the crimes.

“In my opinion, and I think in the opinion of most of our writers, he was born a narcissistic sociopath,” Macmanus explains. “There could be doctors out there who correct me, but I believe that’s part of nature. The nurture side is he was an extraordinarily intelligent person. He was an extraordinarily driven person, and the system – the administrations at hospitals or the schools he attended – saw the promise in this young man, the intellect, the drive, and latched on to that.

“Through a series of events, they were fuelling the fire of that nature, so much so that once he started to make fundamental mistakes over the course of his career, he truly did not believe he was at fault for any of them.”

Macmanus found it fascinating that, initially, Duntsch was convinced he was not to blame for any of the consequences of the operations he performed, and the surgeon’s realisation to the contrary during his eventual court case is explored in the series finale.

“What that says is, over the entire course of his career, he absolutely believed he had done no wrong. He believed it was the patients’ fault, the other people in the operating room’s fault, the administration’s fault. It was never him,” the showrunner says. “The other part of the story that fascinated me was the fact we didn’t have a pure ‘black hat’ in Christopher Duntsch. He was, in many ways, a tragic figure. If he had never operated, we could have been talking about him in a very different way. He could have done some real good. But it was the fact he converted to operating, something he didn’t have any business doing, that’s why we are where we are.”

Macmanus also found that the doctors and experts to whom he and his fellow writers spoke were in agreement that had they performed just one surgery in the same manner as Duntsch, they would never have been able to enter an operating room again. “Duntsch did 38 operations, 33 of which were complete disasters, so while I do not believe he did it on purpose, he absolutely deserves to be in jail for the rest of his life, and any human would have reacted differently to the things he was doing all along,” he adds.

With writing and producing credits on shows such as Missing, Marco Polo and Homecoming, Macmanus, who also worked as an actor for many years, admits he doesn’t watch a lot of true crime series. “It is not my genre,” he notes. But it is his belief that Dr Death transcends the “cops and killers” format of many popular true crime series, which was key to him taking on this particular story.

“I do believe this is a foray into showing true crime can exist beyond the borders of murder or assault,” he says. “Even though there were assaults on these patients, it wasn’t in the traditional sense of the word. Even though Christopher Duntsch did the things he did, he wasn’t a serial killer. The heroes of our story are equally original and that, ultimately, was the reason I wanted to do this story.

“I said to the studio and the network from the very beginning, back when we were selling it to Peacock, that this is not a medical thriller; this is a character study that has elements of thriller to it. I believe anybody who watches it is going to feel the thriller aspect of it, because it’s there, but ultimately it’s a character study – not just of Duntsch but all our characters – and that’s the thing I was most drawn to.”

Produced by Macmanus’s Littleton Road Productions, Universal Cable Productions, Escape Artists and Wondery, Dr Death has been adapted from Wondery’s 2018 podcast of the same name, which is hosted by journalist Laura Beil. The eight-part audio series laid out the characters and the plot of the story the television series would follow, with Macmanus describing it as an “extraordinary” piece of reporting. The writers then carried out their own research and were able to push beyond the podcast to further explore certain events and characters.

“Audiences who are fans of the podcast will find they are going to learn a lot of new things about the characters they thought they knew from the podcast,” Macmanus says. “They’re going to follow stories that look familiar from the podcast but are far more in-depth than the podcast was able to be. In my very humble opinion, there is something there for fans and for people who’ve never heard the story. It’s going to be a ride I hope unlike anything they’ve seen recently on TV.”

In the writers room, Macmanus reunited with scribes including Ashley Michel Hoban (Marco Polo), Ahmadu Garba (The Sinner) and Matthew White (Iron Fist) to build a team that could support each other’s strengths, whether that was in structure, research or humour.

“I genuinely try to find a group of writers who complement each other and definitely are not afraid to look at me and tell me when I’ve got my head up my ass, to tell me I’m flat-out wrong,” he says. “I’ve been lucky over my career, and especially in this room, to have the writers who worked with me long enough that we’ve got a shorthand and they feel comfortable telling me when I’m wrong.”

The writers spent three weeks breaking down the story, a process helped “exponentially” by having the podcast to lean on, before moving quickly on to the scriptwriting phase. “In the rooms I’ve run, we break story pretty quickly because I would rather spend time on the scripts and, if I feel like something’s not right, then going back into it on the script side and fixing it,” Macmanus says. Once the scripts are in place, Macmanus spends several weeks “paving the scripts” to make sure the storylines run smoothly between each episode.

Working during the pandemic, the showrunner had more time to polish the scripts than he might usually have been afforded. Then when production began, led by directors Maggie Kiley (Dirty John: The Betty Broderick Story), Jennifer Morrison (Euphoria) and So Yong Kim (Lovesong), his focus was on making sure everyone who came to work each day could do their job in the safest environment possible.

“I want to lie and say it was fine, but it was very difficult, and it wasn’t difficult because we had to wear masks and shields and couldn’t talk to each other,” he says. “I wanted to make sure people felt they were safe and they felt like we were taking care of them. That was the hardest part, just wanting to ensure everyone – not just the cast but every member of the crew and, by extension, their families – was always going to feel like we were doing everything we could to keep everyone safe.

“I give everyone from the top down a lot of credit for all the work they did and their generosity of spirit over the course of that entire thing. It was emotionally and mentally draining, but we created something special and we did it with grace and, at times, humour. I couldn’t be prouder of everyone who is a part of the show because it was a tough deal and we made it through.”

Viewers in the US can watch the series on Peacock when it launches tomorrow, and Macmanus hopes, above all, they will be entertained, thrilled, scared and even amused by certain points of the story. While Duntsch’s crimes are laid bare, the showrunner wants the series to present him as an “aberration” in a healthcare system populated by “heroes” such as Henderson, Kirby and Shughart.

“They are the heroes we got to see on full display through the course of the pandemic, who were dedicated to sacrificing not just their lives but their careers to try to keep people safe,” he says. “I would like the takeaway to be that we keep our eye on the fact we’ve got a lot of heroes out there in the world who deserve our thanks and deserve to be held up as heroes in all of our eyes.”