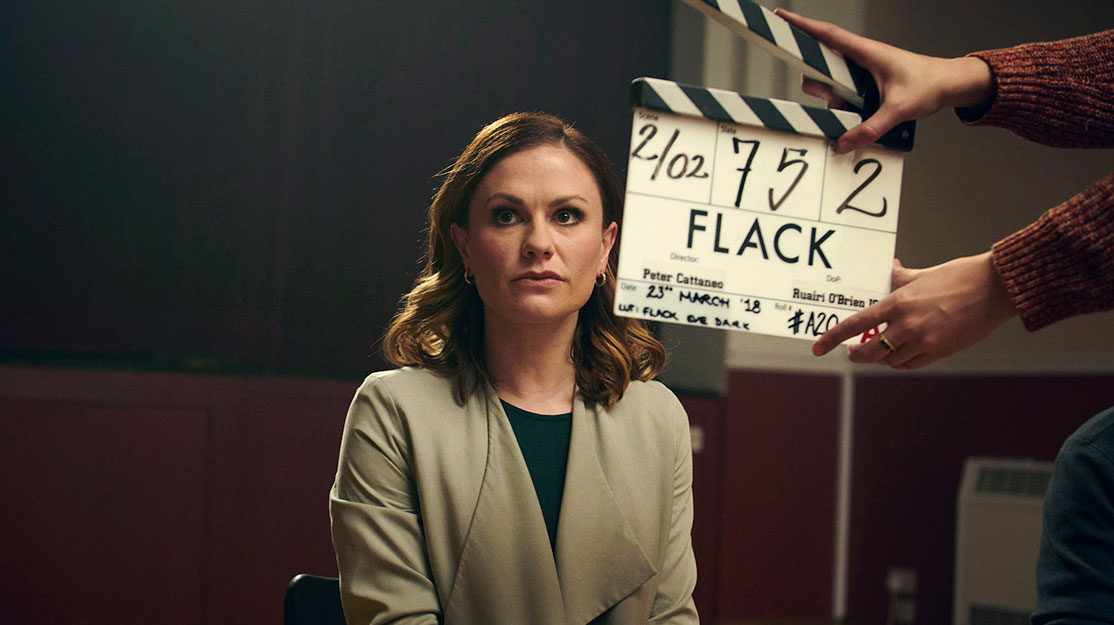 Anna Paquin stars in Flack, a comedy-infused drama set in the world of PR that follows an expert fixer who struggles to keep her own life together. The actor plus creator and writer Oliver Lansley and executive producer Jimmy Mulville tell DQ about the long journey to bring the series to the screen.

Anna Paquin has starred as a telepathic waitress in a town full of vampires and played a girl with supernatural powers caught in a global battle between humans and mutants. But the worlds of HBO’s True Blood and the X-Men films are a far cry from the fast-paced and cutthroat industry of PR, where the actor leads an ensemble cast in UKTV Original drama Flack.

The six-part series, produced for UKTV’s W and US network Pop TV, sees Paquin play Robyn, an American PR executive living in London who must figure out how to make the best of the bad situations in which her clients find themselves while also fighting her own personal battles. Episode one sees drinking, smoking and drug-taking Robyn trying to save the marriage of a TV chef caught with his trousers down, welcoming a new intern to the company and appalling her sister with her bad life choices, all while marking the anniversary of her mother’s death.

Paquin, who is also an executive producer on the series, had been developing the drama with creator Oliver Lansley and Hat Trick Productions through her CASM Films label for more than five years before one final swing saw it land with UKTV and Pop.

“It’s a pretty intense, really dark, funny and very dramatic miniseries,” she says, speaking days after the end of filming in London last summer. “It’s been something I’ve been passionate about for years and I’m really excited that it’s finally come to fruition.”

Paquin says she loves complicated characters who are also very competent in the professional aspects of their life, which describes Robyn perfectly. “She’s a really confident force to be reckoned with, even though underneath it all she’s kind of dying inside and her life is falling apart,” the actor says of her character. “I feel like so often, particularly with female protagonists, if they have independence, they don’t get to be good at anything. They’re just characters going through trauma. Whereas she’s kicking off while also having a lot of very heavy things happening on the home front and in her personal life. It’s also really funny, in a dark way that just tickles my sense of humour in all the right parts.”

Having been in the film business since she was just nine years old, working with the same publicist since she was 10, Paquin knows Flack’s environment extremely well. “Promoting my work is such an integral part of my life, so it’s a world I’m already familiar with,” she says, adding that the series does take some dramatic licence with the stories it introduces. “There’s loads of mundane normal stuff that’s part of the everyday life of a PR person. But I have watched them and been around for various scandals and seen how it’s handled. [The stories in Flack] do happen.”

Flack originated as a half-hour series that was produced as a pilot,but didn’t get picked up. Hat Trick then put it on the back-burner, before it was developed at HBO, where Paquin joined the show through her involvement in True Blood, which also aired on the US cablenet. HBO subsequently dropped the project, but Paquin remained on board. And as she began to spend more time in England after marrying her English True Blood co-star Stephen Moyer, it was decided that the series should be relocated to London.

It was at that point that executive producer and Hat Trick MD Jimmy Mulville sent the scripts to UKTV senior commissioning editor Pete Thornton, who responded positively. With more funding needed to secure the budget, US cable network Pop TV came on board and the financing jigsaw was complete. Hat Trick International is shopping the series worldwide.

Though there are serialised elements that leave enough story hanging at the end of each episode to flow into the next, Flack employs a story-of-the-week structure, with plots ranging from a girl looking to change her image after finding fame on a talent show to a footballer who is worried about a salacious story getting into the papers. “It’s all about how they control these celebrities’ lives and how they keep them out of the public eye for the things they’ve done,” Mulville explains.

“It’s lifting a lid on the dark side of celebrity, showing how, when you read in a newspaper that a celebrity has just confessed to a painkiller addiction, you know it’s really cocaine, but the deal that’s done with the newspaper is to do an interview and photos and call it something else. But we know you’re doing coke, we know you’re banging hookers. Just give us total access to your life – let us trample through it for five minutes and we’ll leave you alone.”

Meanwhile, Robyn finds her own problems harder to manage than those of her clients, a theme that comes to the forefront when focusing on her mother’s death. “She’s a woman under a lot of pressure so it’s got a lot of dramatic incidents, tension and jeopardy, but Olly’s written it in such a way that the characters are slightly cynical and very funny,” Mulville continues. “They’re the kind of people you really want to hang out with because they make you laugh, but what they’re dealing with is human misery. That’s their currency. It feels very contemporary.”

The exec says he applauds UKTV for taking the risk to back the show, which he believes other channels would have felt very uneasy about supporting. “They want their dramas without jokes and don’t want their comedies to have anything dramatic. So it’s a very contemporary thing,” he adds. “This is an unusual world but the audience is familiar with the world of celebrity. This is shining a light in the dark corners of this world that the public are often kept away from. Of course, we’re doing it fictionally so we can say what the fuck we like.”

Lansley himself has been working on the series in some shape or form for the past six years. He says the starting point was a desire to write a show with a strong female protagonist, at a time when complicated male characters such as Don Draper (Mad Men) and Walter White (Breaking Bad) were dominating the small screen. That the show ended up in the PR world was down simply to the fact that Lansley, who began his career as an actor (Best Possible Taste: The Kenny Everett Story), was fascinated by the industry.

“It’s kind of a mad world. People often think PR is just white wine and air-kissing, but there’s quite a lot more to it than that,” he says. “I was attracted to putting Robyn in PR because of this idea that she would spend the day lying to people and manipulating the situation, which would make her really good at her job. But then she’d go home to her family, her boyfriend or whoever and have her own problems, but she would be expected not to use those talents of lying and cheating.”

After writing the pilot, Lansley began the script-writing process by setting up a small writers room with a number of female scribes, including a pre-Fleabag Phoebe Waller-Bridge plus Vicky Jones, Yasmine Akram and Rose Heiney, who helped come up with story ideas and offered notes on his scripts. Paquin also joined in with plot points and character beats. “That was a slight nod to a more American process that I was interested in doing, but it’s rare in the UK that you can afford a writers room,” he explains. “This show was stewing inside me so much that it flowed out quite easily when I came to write it.” All six scripts were ready when UKTV and Pop commissioned the series, though each saw some reworking before filming began last year.

Despite its dramatic setting and some of the scrapes in which Robyn and her clients find themselves, Lansley believes Flack is funny enough to justify also being called a comedy-drama, an increasingly popular sub-genre that includes hit shows like Orange is the New Black, Killing Eve and The Bisexual. “It’s in that interesting place. Like real life, the most dramatic things are often hilarious and the most hilarious things are often devastatingly tragic,” he adds. “That’s definitely the tone I like to play in. Even a show like Breaking Bad had so much humour in it. Whether you want to call it a dramedy or a comedy-drama, there are so many labels. But hopefully it’s pretty funny.”