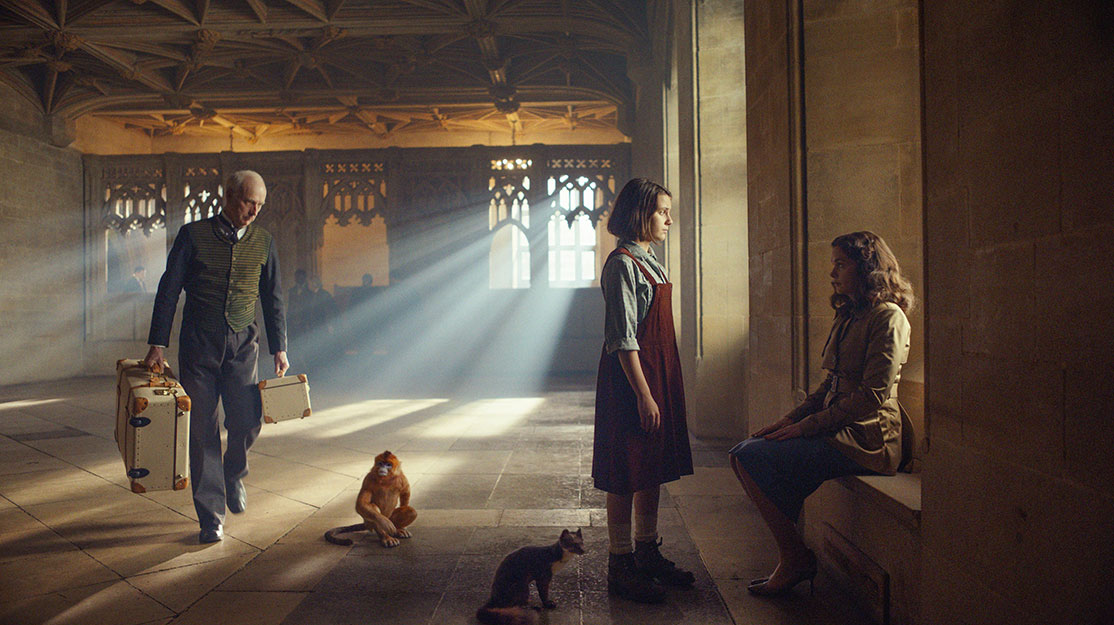 Based on Philip Pullman’s acclaimed novels, HBO and BBC drama His Dark Materials aims to set a new benchmark for fantasy series. The cast and writer Jack Thorne reveal their approach to writing and filming the adaptation.

Fantasy novels have always proved popular source material for films and TV series, but the unprecedented success of HBO’s Game of Thrones has sent the genre into overdrive in recent years, with commissioners around the world looking to land their own fantasy epic that can match the majesty of the George RR Martin adaptation.

The streamers have also been getting in on the act. Amazon, which spent big on adapting Gaiman and Terry Pratchett’s Good Omens earlier this year, is taking its spending to the next level with its series version of JRR Tolkien’s Lord of the Rings. Netflix, meanwhile, is taking a major swing in the genre with The Witcher. Starring Henry Cavill (Man of Steel) and based on Andrzej Sapkowski’s series of books, the show will be released later this year.

Now, after Game of Thrones concluded with its eighth season earlier this year and with prequel House of the Dragon on its way, HBO is aiming to set a new benchmark in the genre with an ambitious series adaptation of Philip Pullman novel trilogy His Dark Materials, coproduced with UK pubcaster BBC1.

Debuting in the UK this Sunday and stateside the day after, the first season of the series – a second run of which is already in production – is based on the first book in the series, Northern Lights (published in the US as The Golden Compass).

Unfolding across eight one-hour episodes, made by New Line Cinema and Bad Wolf (A Discovery of Witches), His Dark Materials is set in an alternative reality that features multiple parallel universes, with some worlds more like our own than others. The story centres on a young girl called Lyra, who lives in a world where all humans have talking animal companions known as dæmons, which are the physical manifestation of the human soul.

The first season follows Lyra, who lives with other orphans alongside scholars at Oxford’s fictional Jordan College, as she discovers a secret involving her uncle, Lord Asriel, and the villainous Mrs Coulter. After Lyra’s friend goes missing, she leaves Jordan College and embarks on a dangerous journey, uncovering links between a spate of child kidnappings and a mysterious substance known as Dust.

As adaptations go, there is little fantasy IP more revered than Pullman’s young-adult trilogy. And after the enormous disappointment surrounding the most recent screen outing based on the books – 2007 movie flop The Golden Compass – fans of the novels will be hoping for much better from the BBC and HBO.

The daunting task of penning the adaptation has been taken on by prolific British screenwriter and playwright Jack Thorne, whose most recent TV credits include Channel 4 drama miniseries Kiri and The Accident. The latter premiered on the UK broadcaster last week.

Thorne admits that when he was initially approached about the project, his first thought was to “run for the hills.” As well as being wary of the huge pressure of living up to the source material, he was just months away from the opening of his West End version of JK Rowling’s Harry Potter & The Cursed Child and also had a pregnant wife to think about.

However, clearly a fan of Pullman’s work, Thorne soon changed his mind. “They’re just so perfect, these books, and the idea of anyone else doing them… I would’ve been insanely jealous,” he says.

The hard work then began, with Thorne returning to the trilogy he had previously read twice and consuming all three books over the course of four days. He then met with exec producer Jane Tranter, co-founder of Wales-based Bad Wolf, and agreed to board the project.

After that, Thorne and Tranter discussed their plans for the series with Pullman, keen to be as faithful to his work as possible. “The important thing we said from the very moment we met Philip was, ‘We want to tell this story,’” Thorne says. “I wanted to disappear; I didn’t want to be visible as a writer. I wanted to represent the soul of the books as well as I possibly could.

“Where we’ve added stuff or changed stuff, it’s been because we either thought that there was something we could do a bit differently to fit the screen a bit more, or because we were aware that we were going on a longer journey with this and maybe there were elements from later in the books that we could bring forward and help make our story sing.”

In one of many revelations offering an idea of the level of perfectionism applied to the project, Thorne says the first episode went through a whopping 46 drafts. “We went down a lot of wrong corridors, and sat in those corridors and wept,” he jokes.

“These books are monstrously good. When you’re given an adaptation, there are two forms. There are ones where you go, ‘There’s a seed of something brilliant here that I can play with and make work.’ And there are other ones where you go, ‘My job is just to get this as close to [the original] as possible on the screen.’

“I do think these books are perfect. And when you’re given perfection, that’s scary as shit.”

The cast of His Dark Materials provides further evidence of the scale of this series, with the production able to attract internationally recognisable actors including James McAvoy (Split), Ruth Wilson (The Affair), Clarke Peters (The Wire) and Lin-Manuel Miranda, creator and star of hit Broadway musical Hamilton.

Many viewers will recognise British-Spanish actor Dafne Keen, who stars as Lyra, from her remarkable turn as young mutant Laura in 2017 X-Men movie Logan.

The 14-year-old reveals that she didn’t expect to land the part following her first audition, which took place when her face was swollen from a jellyfish sting. But a subsequent audition alongside Wilson, who plays Mrs Coulter, gave her a better feel for the character. And despite Keen being quite physically different from Pullman’s description of a blonde, curly-haired Lyra, the young actor believes they share many personality traits.

“We’re very nutty, both of us, very curious, quite loud and quite cheeky,” says Keen, who admits to feeling the pressure of portraying such a beloved character. “You tell yourself that you don’t think about that, but you genuinely do think about it. In your brain, you’re going, ‘Oh my God, someone save me!’

“When I was doing it, I was thinking there would probably be people who would be like, ‘This girl’s terrible, I hate her, she’s not doing it justice,’” Keen continues, before adding – like a true millennial – “sorry, not sorry.”

Sat alongside Keen is Wilson, who assures her young co-star that her concerns are unfounded. Recalling that she “knew instantly that [Keen] was the one” for the role upon that first shared audition, Wilson says: “She brought such an amazing energy that I thought, ‘I’ve got to put some of that into my performance.’ She’s totally at one with herself and there’s an animal side to her, which has got to be what Mrs Coulter was like when she was young… I’m taking notes from her.”

Keen and Wilson share plenty of screen time, with Mrs Coulter initially presenting herself to Lyra as a kindly benefactor before her true nature starts to be revealed. For those familiar with the books, it’s hard to imagine a more spot-on casting choice for Mrs Coulter than Wilson, who previously excelled as a character with a very dark side in the shape of Alice in Luther, the BBC detective series starring Idris Elba.

Far from being concerned about her “evil” Mrs Coulter frightening young viewers, Wilson identifies a surprising benefit: “My nieces and nephews won’t want me to babysit again, and I’m OK with that,” she jokes.

Despite the well-documented failings of 2007’s The Golden Compass, one area in which it did succeed was its recreation of Pullman’s dæmons, winning the Oscar for Best Visual Effects.

Describing the creatures as “fundamental to every scene,” Wilson is confident this production has brought them to life equally well, while Peters, who plays The Master of Jordan College, is full of praise for the artists behind the dæmons. “What was awesome about it was the puppeteers and the way they served us as actors,” he says.

One scene from episode one sees The Master interacting with a dæmon in the form of a leopard. “It could have just been a puppet, but the puppeteer made it breathe and moved it around so it would get comfortable,” says the actor, best known for playing detective Lester Freamon in seminal HBO drama The Wire. “The face of the puppet looks so awesome that you didn’t know whether you were really looking at a leopard or not. So the experience of acting with something that, in the past, would have just been in your imagination was supported by wonderful technicians.”

One of the main criticisms of The Golden Compass movie was the extent to which it shied away from the religious themes in the source material, with Pullman’s trilogy offering a barely veiled criticism of Catholicism.

Executive producer Tranter insists that no punches have been pulled in this adaptation. “We planned to adapt the books as the books were written, so we will go to the heights of the discourse that the books go to,” she says.

“One of the beauties of working for the BBC and HBO is that no-one is fearful. In fact, everyone is embracing of the journey the books go on. You don’t work for the BBC and HBO and do a vanilla adaptation that cuts through the middle and doesn’t tackle, right from the get-go, every note that the trilogy has got to sound.”

Thorne, meanwhile, believes the themes of His Dark Materials are now more relevant than ever. Speaking on the day Extinction Rebellion protestors were controversially removed from central London streets, he says: “We live in scary times. There’s so much in Philip’s book that’s about where we’re at now, even more than when he first wrote it.

“The thing that I most admire about his telling is that there’s an obvious story to be told – Asriel’s story – and he doesn’t tell it; he tells Lyra’s. That choice between following the person who’s intent on greatness, Asriel, and abandoning that in order to follow the person intent on goodness, in Lyra, is such a bold and brilliant choice.”

He also compares Lyra to young climate change activist Greta Thunberg, noting: “There are quite a lot of similarities there.”

Sounding wise beyond her years, Keen agrees that her character is a strong role model. “What’s really relevant is that Lyra is growing up in a world of men, in a college, which is basically what is happening to any girl in 2019,” she notes.

“The most amazing thing about Lyra, and what every single girl should take from her, is don’t be scared – go out there and be yourself. Because if you are a force of nature, which is what Lyra is, you will make yourself seen and heard.”