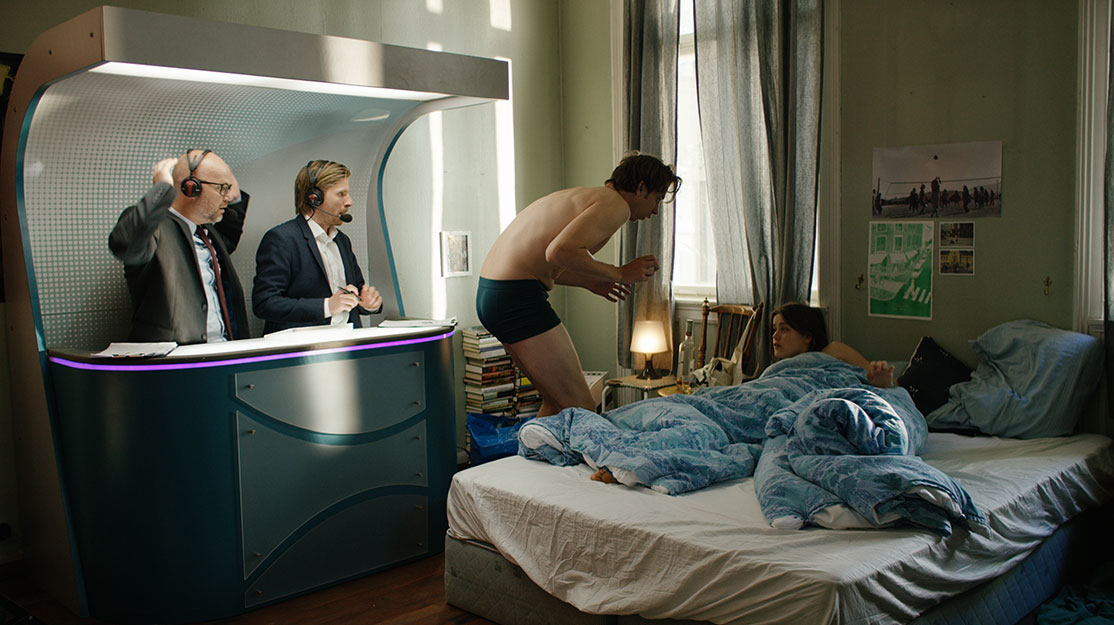 Having already enjoyed life as short film and a kids’ TV show, the idea behind Martin Lund’s comedy drama Match has now evolved into a “grown-up” series. DQ chats to the writer, director and actor about finding the balance between high stakes and humour in a 15-minute running time.

It’s not unusual to see a writer doubling up as the director on their own show. Martin Lund takes things a step further, however, by adding a third spoke to his involvement in Norwegian shortform drama Match – he’s also one of its stars.

Lund plays one of two sports presenters who commentate on the life of Stian (Herbert Nordrum), a 20-something guy with 20-something guy problems. Though he can’t see them, the two onlookers are there to chat tactics, performance and foul-ups at every vital moment of his life.

Together, Stian and his commentators answer some of life’s most troubling questions. One episode sees Stian wake up next to a woman, played by Eline Grødal, whose name he can’t remember. Cue lots of desperate attempts by Stian to work out her identity, coupled with some wisecracking asides from the commentators.

The 20-part shortform series, which is due to air on Norway’s NRK, had its world premiere at Série Series in France this summer, and was also selected for the Séries Mania Coproduction Forum, which took place in April.

“Match started as a short film, Hjemmekamp [Home Game], I made in 2004 so it’s been a long journey,” Lund says. “It was about how hard it is to get up in the morning to reach work on time. It was really well received; I went to Sundance with it and that was fun. So that sparked the idea that it could work with all challenges in life. Then NRK was looking for a children’s show, so it made sense to make a show about this, called Kampen (The Games).”

Running for 26 episodes, The Games followed an 11-year-old who had to overcome such daily trials as getting to school on time and sending a text message to a girl – small events that can actually seem like a much bigger deal to those involved.

“When we were in the writing room, we had all these ideas that we came up with that we couldn’t use because it was a children’s show, so we thought it could work as a grown-up show as well,” Lund recalls. “So Match is more sex, drugs and rock ’n’ roll. It’s also a bit more relationship-based. It was almost more difficult to make the grown-up version because the junior show was more basic, like sneaking out at night past bedtime. But the grown-up version needed some more psychological stuff and it felt unnatural not to go into dialogue [between characters] more. So it was a bit more complex to write and get the melody of the show.”

Lund wrote the series with Thorkild Schrumpf, and also directs with Liv Karin Dahlstrøm. It is produced by Ape&Bjørn and distributed by Red Arrow International.

From the outset, the key to the show was finding the right dynamic between Stian and the commentators, to ensure the latter didn’t simply serve as an outlet for exposition.

“The commentators demand a lot of attention; they are the voice of the main character so it was important to keep in mind that it has to be Stian who dictates the momentum of the episode and the situation he is in,” Lund explains. “What we struggled most with was if the commentators are saying something or driving the story forward, you don’t feel Stian is in charge. It doesn’t work. He has to be the frontrunner in this story, even though they are talking about and articulating everything.

“That’s been the most difficult part in both writing and directing because it’s so easy to lean on the jokes and guys in the booth just saying what is happening. I feel like we’ve been in this voiceover challenge throughout the whole thing. It’s very difficult to write.”

Lund describes Stian as an antihero, whose thoughts and insecurities are revealed through the commentators. “That’s the dynamic that works really well – him being really insecure and the sports lingo and sports references. I think most people are insecure in their everyday life but are trying not to be, so that makes it natural for me to write him as an uncertain character.”

If there’s a common theme throughout the 20 episodes, Lund says Match is ultimately a love story that straddles the line between comedy and drama. “It’s basically Stian and a girl’s ups and downs. Every episode is a new challenge for Stian. It doesn’t always directly concern her but she will be the reason for him to do something. She’s the big thing in this season overall.

“It’s a love story – that’s the drama that is underneath the story. One episode is about meeting her friends, another episode is about being at home with her parents and the challenges as they get to know each other.”

When it comes to writing and directing a series he also stars in, Lund admits: “I put it on myself.” But he praises co-director Dahlstøm and co-writer Schrumpf among the team he built around him. “It was all planned around me because I felt it had to be my voice, my song, my melody,” he says. “These people are very close to me – they’re friends as well so it was easy for me to explain [my ideas] or for them to contribute into this universe.”

Lund and Schrumpf spent a month in a writers room to develop the series before splitting off to write the scripts. “It was very much a show about finding one small idea that has a lot of facets to it. Remembering someone’s name could be an idea on the board. We spent a lot of time working out how to handle these types of situations, like how you go about figuring out someone’s name. If a big idea has a lot of strands, it meant we had a situation we could build this episode on – making her call you, Google your name, just talking like that and trying to build the narrative and drama around those ideas with forward momentum and funny jokes.”

On acting, he adds: “At first I was very self-conscious but I got used to it. I also liked the chance to see what worked and what didn’t. I learned a lot from doing the children’s show because that was the same, so this time I had a pretty long list of things I knew would work, how things should be played and what kind of reaction we should have.”

As the web opens up new possibilities for digital shortform content, it was a largely an analogue decision to keep the running time of Match episodes to 15 minutes. Lund had once written a 28-page script for an episode, which turned in to a 19-minute instalment on camera, but the show couldn’t find its feet at a traditional half-hour running time.

“We tried a lot of stuff in the studio just to see what we could and couldn’t do with it. Even then [at 19 minutes], we felt it was maybe a bit too long. So from there it was very natural to have two episodes in one half-hour running time.”

Lund is now working on a feature film called Psychobitch, but The Games has been sold to more than 40 countries and has a Canadian remake – YTV’s Game On. Despite the short-lived but similarly framed Pete Versus Life, which aired for two seasons on Channel 4, Lund believes Match has plenty of humour and drama to ensure the show heads into extra time.