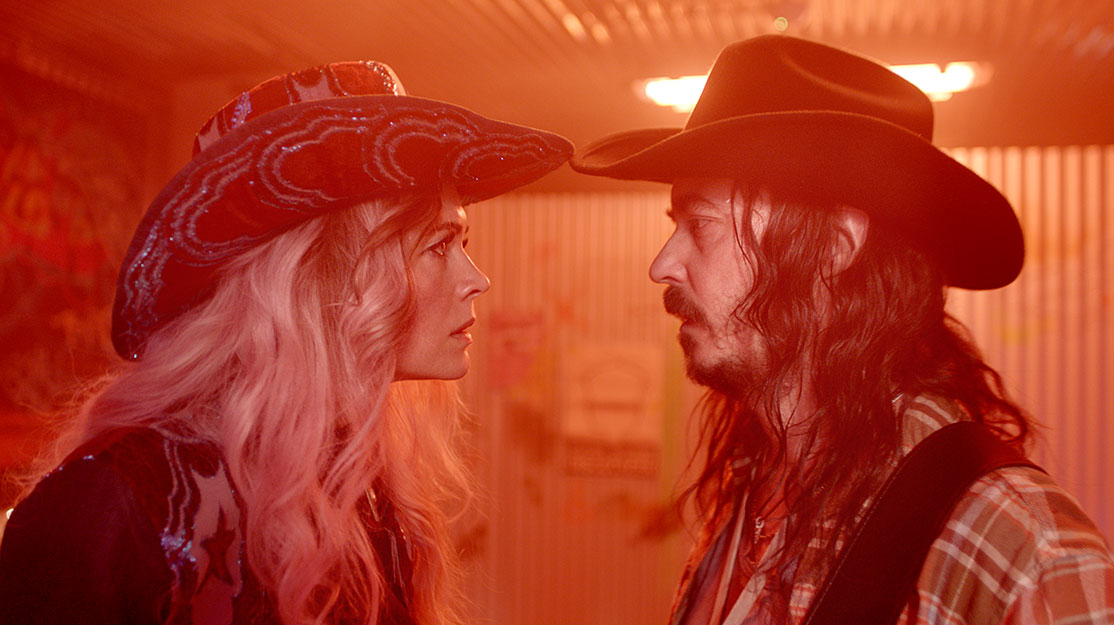 Married to the music

In Harmonica, Swedish actor Josephine Bornebusch plays one half of a country music duo trying to save their marriage with one last tour. She tells DQ about writing, directing and starring in the series.

“Who wants Champagne?” When country music group Harmonica step out on to the stage, thousands of fans scream and cheer as the group launches into their hit single – an ode to partying that characterises the joyous atmosphere at the packed gig. Yet in reality, the band played to an empty room – just one of the effects the Covid-19 pandemic had on making the five-part Swedish series that takes its name from the band at the centre of the story.

“It was complicated because we did a few scenes in a big arena and you need to go up onstage and just go, ‘Manchester, how are you?’ and no one is in the audience because we couldn’t even have one supporting artist there because of Covid,” actor, co-writer and director Josephine Bornebusch tells DQ. “It was just like, ‘OK, I’m just going to throw myself out there and pretend I’m a rock star and we’ll see what happens.’ But it worked out pretty well. We cast a group of people who are also musicians so they actually played for real, which helped.”

For the series, Bornebusch partnered with Jonas Karlsson (Beck, Sthlm Requiem) to write the script, the music and star together as Monica and Harry. Sixteen years earlier, the pair had lived the high life performing to thousands of fans in arenas around the world. Now with their marriage in crisis, Monica dreams of returning to the stage while recovering alcoholic Harry is just trying to survive. When their manager suggests a nostalgia tour, Monica gives Harry an ultimatum: tour or divorce.

Produced by Warner Bros Sweden in partnership with Nordic streamer Viaplay, the numerous music videos used as transitions throughout the series were recorded before the pandemic. Then when the production was just a week away from shooting, all their plans were put on hold.

A year later, filming was able to resume, marking Harmonica out among those projects most delayed by world events. Bornebusch even directed a film, Orca, during the hiatus.

Yet the origins of the project date back almost a decade to when Bornebusch and Karlsson appeared in a movie together. Both in long-term relationships, they considered the idea of writing a show about a couple who had been together for a long time and needed to rekindle their love for each other. It was while she was watching Swedish folk duo First Aid Kit at a concert in New York City that she then struck on the idea of putting country music at the heart of the series.

“When you listen to country music, you can see pictures in front of you,” she says. “I went home and I started to write about a couple that was actually an old country duo. They were huge 20 years ago, but now no-one remembers them and their relationship is not great. Because Jonas is also a musician, he was like, ‘OK, so let’s write it together. Let’s play the leads. I write the music and you will direct it.’ So that’s what we did.”

Bornebusch pitches the show as musical-meets-Scenes from a Marriage, Ingmar Bergman’s seminal 1970s television drama about a couple’s disintegrating union.

“We have some really, really long scenes with two people in a room, and then we have a lot of flashbacks and music videos,” she continues. “It’s a heavy drama, but we also have some characters that are almost there just as comic relief. I can’t really tell you the genre because it’s all over the place. It’s really dark, but it’s also funny. The story is about a couple and they’re going on this tour to save their marriage, but it goes the wrong way.”

In fact, the series opens with the couple in therapy, where Monica expresses a desire to rebuild their relationship or break up. She sees a reunion tour as a way to reignite the spark in their marriage but Harry is reluctant to go back on tour after their last experience on the road was marred by a tragedy shared by the couple.

“He never came back from that. That’s why he can’t cope with being on stage again,” Bornebusch explains. “She wants to move on. So they go on this tour to try to save their marriage. He’s starting to drink again but she can’t live without him. They just have to figure out how to survive and to live together because they need each other badly. But they need to come out of their grief.”

Naturally, music is used throughout the series, whether Harmonica are performing on stage or their songs are shown in music videos that segue from one scene to another. Often the songs playing relate to the story or the emotions at play in that same moment.

One example is the band’s biggest hit, Champagne, which is about partying and having a good time. “But they just hate to play it,” Bornebusch says. “They are not there [in that place] at all right now but that’s the song everyone wants to hear. We reference that in a scene where Harry says, ‘It’s a bad song. I’m telling people to drink alcohol and I’m sober. It’s totally wrong.’ We used music a lot, and it was all written for the show. It’s not like we just wrote a couple of songs and then sprinkle them on there.”

Karlsson, an actor and writer, wrote the music for the whole show, including Harmonica’s own tracks and the background music playing through the series, even the tracks heard through restaurant’s speakers.

“Sometimes I told him, ‘I think we need a song here and it needs to be pretty mellow. It’s in between these two scenes,’” Bornebusch says of their creative collaboration. “Then he went back and wrote something. We wrote the lyrics together. Then when I was in the edit, I would call him and say, ‘We need this and this and this,’ so he also wrote a couple of songs and tracks afterwards that we needed.”

The writing process, she notes, was “complicated” as they sought a balance between long, emotionally charged scenes between Harry and Monica and shorter scenes that would move the story forward at a faster pace. “It was actually really nice to have someone to share all your ideas with,” she says. “Normally I share them with myself and it’s nice to have someone to bounce some ideas off. He took care of the music bit in the story and the characters and I took care of the whole dramaturgy. It worked really, really well.”

Bornebusch was on her own behind the camera, but because she had co-written the series, she already knew what she wanted from the series. She and Karlsson would often rehearse scenes in the writing room so when they arrived on set, they were already well prepared.

“It’s all about respect and trust. We were doing it together more than I was telling them what to do,” she says of working with the actors. “Then when it came to the singing, as an actor, you’re told, ‘Go into that room and cry and pretend that you’re sad’ so when you’re told, ‘Go up on the stage and pretend you’re a singer,’ it’s the same thing. But someone asked me, ‘Is this you telling people that you also can sing and you want to be a singer?’ I was like, ‘Hell, no.’ I don’t want to be a singer. I’m not a singer or a performer that way.”

Filming the concert scenes involved a lot of VFX production. In one scene, the band play in Belgium but travel restrictions during the pandemic meant they had to recreate the setting while performing in front of just 50 people. For other scenes set in arenas with larger crowds, it was all VFX work as huge crowds were also prohibited.

“We were supposed to shoot in Belgium, Copenhagen in Denmark and Germany, but we couldn’t,” Bornebusch says. “So we shot it all in Sweden. We had a second unit in Belgium so there was a mixture of exteriors from there and VFX effects help and set extensions. It was a tricky production in that kind of way. But after Orca, it was nothing compared to the VFX in that. The amounts of VFX shots we had in Orca, it was more than The Matrix. That’s what they told me, so this was an easy VFX shoot compared to that. We also did a lot of digital work to make us look younger in all the flashbacks 20 years ago.”

Speaking ahead of Harmonica’s launch on Viaplay this Sunday – the series is also screening during the Berlin International Film Festival as part of the Berlinale Series Market – Bornebusch jokes that it’s strange to talk about a new show she has actually been making for more than two years. “But I’m also really happy it’s actually coming out now,” she says. An album featuring music from the series is also being released to mark the premiere.

Harmonica is ultimately a story about love, relationships and families, echoing the themes Bornebush has discussed in Orca and another Viaplay series, Love Me. While the story is set in the world of country music, she hopes viewers will find something to tune in for, whatever their musical tastes.

“It’s always hard to say I’ve never seen anything like it before because, you know, you’ve seen everything, right? But the only thing I can say is that for me, it’s a very new way of telling a story,” she says. “Both Love Me and Orca are all about love, relationships and families. This show about that as well, it’s just in another package and set in another arena. But it is tricky because either you will love it or just think, ‘What is this?’ You can never please everyone.”