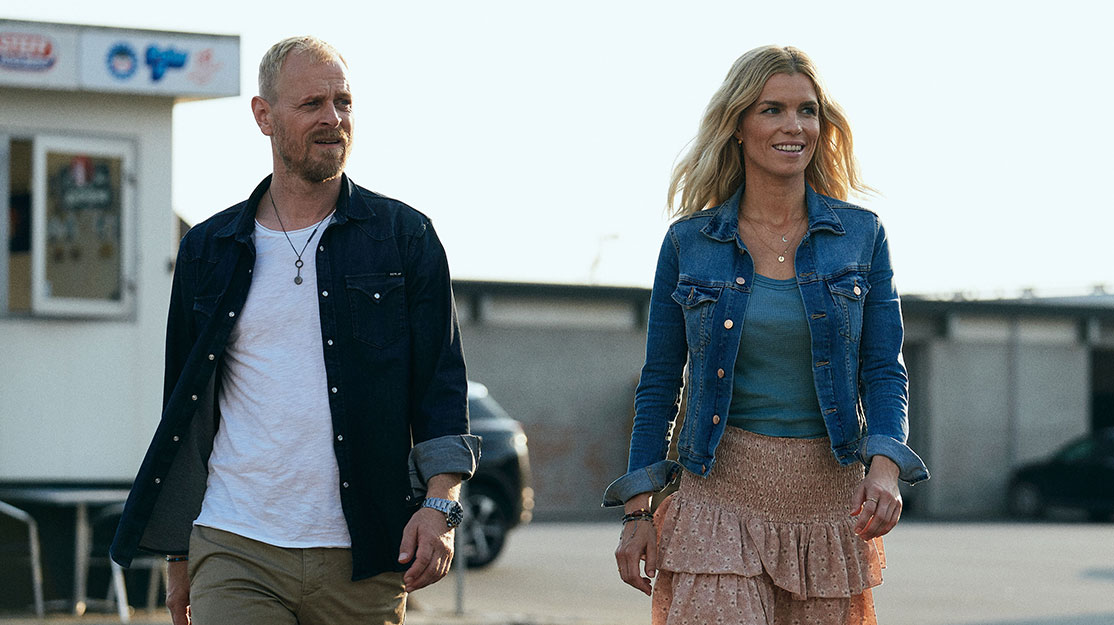 Danish actors Carsten Bjørnlund and Marie Bach Hansen discuss playing husband and wife in ‘blue sky’ crime drama Hvide Sande (White Sands), in which they star as detectives who go undercover to solve a murder in an idyllic coastal town.

For three seasons of Danish drama Avingerne (The Legacy), Marie Bach Hansen and Carsten Bjørnlund played siblings in the story of four grown-up children who fall out following the death of their artist mother. That series ended in 2017, but the actors have now been reunited on screen as a married couple – or so it seems.

Hvide Sande (White Sands) sees Hansen play Helene, a Danish undercover expert who is called in to solve the brutal murder of a young German surfer, which was committed one year earlier and has shaken the close-knit community of the titular coastal town. It is then that Helene meets Danish-German homicide investigator Thomas (Bjørnlund), a detective still grieving for his wife.

However, to solve a murder in a town where no one trusts the police, they must live together as a couple who have sought a new life away from the big city and quickly ingratiate themselves with their new neighbours. As Helene and Thomas adapt to their new roles after both becoming used to living alone, they grow closer to the secrets at the heart of the town, its hidden connections and old wounds, while also facing up to their feelings for each other.

“It’s kind of a different experience from playing siblings who fight each other,” Hansen tells DQ. “For me, it was an amazing opportunity to play some more with Carsten. I enjoyed acting with him [previously] and we could [build upon] the work we had done in The Legacy. Because we know each other as actors, we could just continue our work together with these new characters. It felt very natural.”

Launching in May on Denmark’s TV2 and streaming service TV2 Play, the show can be considered a ‘blue sky’ crime drama, an antidote to the traditional Nordic noir series from the region, with its idyllic landscapes and light humour that is threaded through the story. The series was created by AJ Kazinski, the pseudonym of crime writers Anders Rønnow Klarlund and Jacob Weinreich, with Tilde Harkamp as the conceptual director.

As Helene and Thomas get to know the key figures living in Hvide Sande, they become friends with local policeman Peter (Jesper Asholt) and his wife, the town’s doctor Susanne (Camilla Bendix). Meanwhile, surfer girl Michelle (Amanda Friis Jürgensen) was in a relationship with murder victim Sebastian (Ric Wersig) and is an unofficial leader of a group of young surfers, which includes Theis (Andreas Jessen) and Kraul (Simon Mathew).

Michelle is also the daughter of the local fishing king, Thorbjørn. Used to success and the owner of several shipyards in the town, Thorbjørn is willing to take the search for Sebastian’s killer into his own hands when the police keep coming up short. Then there’s Danish police chief Ellen (Bodil Jørgensen), who leads Helene and Thomas’s undercover operation under pressure from her superiors to crack the case a year after surfer Sebastian’s body was discovered.

As well as Avingerne, Hansen’s credits include pan-European crime series The Team, while Bjørnlund has appeared in comedy drama Rita and Liberty, the story of Scandinavian expats in Africa. Both actors say they were drawn to Hvide Sande by the chance to appear in the type of series they hadn’t been involved in before.

“For me, it was about trying to work in a genre I hadn’t really worked with before, blue-sky crime,” Bjørnlund says. “I wasn’t too familiar with that genre, so that was one of the reasons I felt it could be fun.”

“We talked about British blue-sky crime dramas as a reference,” says Hansen. “I was drawn to the lighter tone in the script and, like Carsten, I like to try something new every time I choose a project. It’s fun to try something you haven’t tried before. I’ve done a crime show before, The Team, but it was darker and they tried to make a Nordic noir. With this, I really liked the humour in the first scenes when I read the script; I haven’t tried anything this light on television before. I thought that would be very fun.”

Hansen’s character Helene is first introduced working undercover, having grown close to her target before arresting him during a romantic dinner. When Ellen suggests she needs a break after almost six years constantly working undercover, perhaps a stay in Hvide Sande wasn’t quite what Helene had in mind.

“We talked a lot about her background because she’s done this a lot of times and got emotionally connected to Jimmy, the guy she arrests. We talked about how she’s been with him for over a year and has become very attached to him,” the actor says. “She hasn’t got anything else other than this work. When we meet her, she has all these questions like, ‘Who am I? What is my real life?’ She wants to figure out who she is besides her work, but she’s not ready to take that step yet and take a holiday or some time off to figure it out. She just continues, and this is where it’s the perfect meet-up with Thomas. It comes right when she has asked herself these questions.”

In Hamburg, Thomas is a good detective struggling to come to terms with the death of his wife. So when the German police insist one of their own be involved in the hunt for Sebastian’s killer, Thomas is put forward for the role.

“He’s quite a good detective in Hamburg and he recently lost his wife and found out she might have had an affair, so he’s quite down and he’s obsessed with trying to figure out the who, how, where and why of this affair,” Bjørnlund says of his character. “He’s not working when we meet him, so his boss is trying to pull him out of the gutter and put him in a different environment to see if it will help him.”

Much of the humour in the opening stages of the eight-part series – produced by Deluca Film and distributed by Newen Connect – comes from Thomas’s consistently disparaging remarks about Denmark, after it is revealed one of his parents comes from the country and his experience living there left a sour taste. “But it’s not something we talk too much about. Being a blue-sky show, we don’t talk too much about his problems,” he says, as Thomas also makes unfavourable comparisons to Germany, “which is common when you’re a fish out of water. You try to grab on to something you know.”

“It is something they keep on doing, teasing each other about where they come from,” Hansen notes. “It’s the funny tone between them.”

The central duo’s relationship gets off to a bad start when they argue over each other’s car-parking abilities before being told they will have to pose as a couple. But initially, the development of their relationship takes a back seat to the investigation. No sooner do they arrive in Hvide Sande than, late at night, Helene breaks into a lighthouse and Thomas is tracking some local teenagers – a decision that ends up with Thomas in the emergency room after being mysteriously knocked out, leading him to his first encounter with Susanne and Peter.

“They both like to be professional, but they also want to get out of there as soon as possible,” Hansen says. “Why I was interested in doing this with Carsten is the two characters don’t want to be together but they have to stay together because they both have this goal to solve the murder. I really like this paradox in the characters and the situation. You could continue with this forever with Thomas and Helene. With the parking situation, it’s not a joke – we could have continued discussing these things they disagree on and it’s always funny. It was very joyful to have this motor through the story.”

While it might have been daunting for the starring pair to approach a new series playing characters who are pretending to be someone else, Bjørnlund jokes: “My luck was Thomas wasn’t very good at taking on any other roles, so I didn’t really have to prepare for doing that. I was just preparing for playing Thomas. When he was put in that situation, I was put in that situation as well. We had a simultaneous experience, me and Thomas.”

“I had my police training from The Team, where I played a tough police officer, so I could just put on the dress and play the camping guest, more or less,” adds Hansen. “I had actually been looking forward to wearing wigs and costumes, but it played out very naturally. Sometimes there are situations where they’re about to get caught and people are suspicious, but the characters they play are not too far away from the characters they really are.”

In Hvide Sande, Thomas and Helene’s arrival is greeted warmly by some and with suspicion by others. Bjørnlund describes the show’s setting as the real Hvide Sande on steroids, replicating its real-lifer surfing and fishing communities. Filming took place there on Denmark’s west coast over four months last year, in between Covid-19 lockdowns.

The country was coming out of another lockdown when the show debuted on TV2 earlier this year, “so our show was like water in a drought,” Bjørnlund says. “People needed something bright and light.”

It’s the easy chemistry between Bjørnlund and Hansen that sets Hvide Sande apart from other similar shows – although minimising that connection to portray people who initially dislike each other wasn’t a straightforward task. “The hard part was to not like each other, to not go too fast into liking each other, and also not laughing during takes and all that, because we have a lot of fun together,” Bjørnlund says.

Hansen adds: “We have a lot of fun off camera but Helene and Thomas also have a dry sense of humour going on. We had to find the balance between them because they couldn’t be like brother and sister too fast in their humour, so we searched a bit for the awkwardness. But we know each other very well and like to tease each other, so it was actually very easy.”