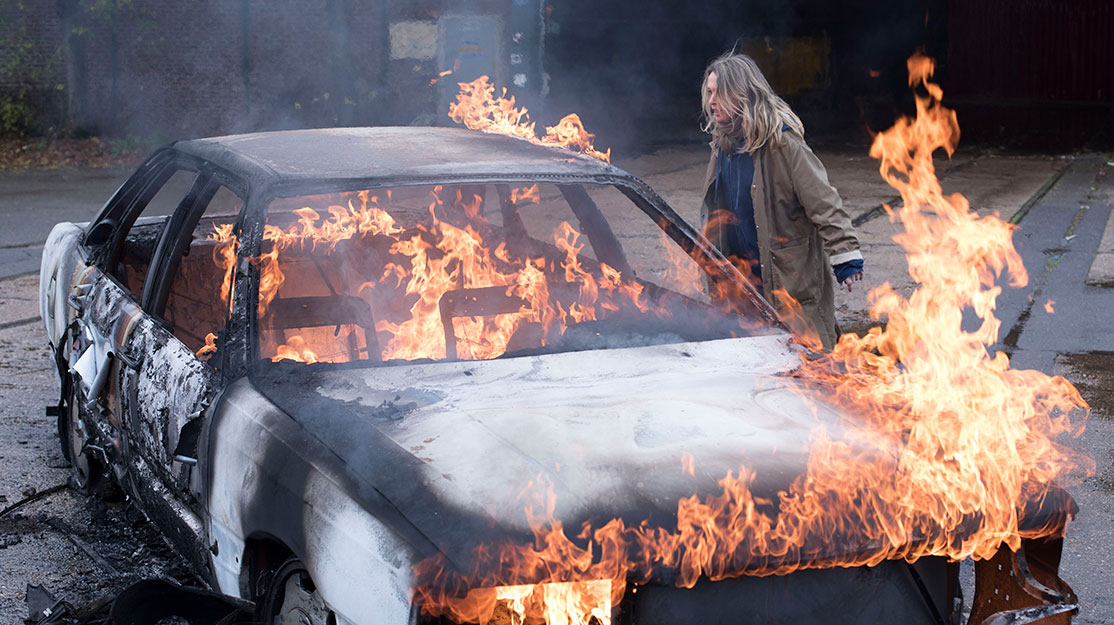 Call My Agent star Anne Marivin and director Didier Le Pêcheur tell DQ about their partnership on the set of Rebecca, the French remake of British drama Marcella, in which a detective hunts a serial killer while suffering from devastating blackouts.

For three seasons, Anna Friel played the title role in British noir drama Marcella, which told the story of a detective who embarks on the hunt for a serial killer while dealing with a hectic personal life and the blackouts that leave her with no memory of what she might have said or done.

Now, a French remake called Rebecca is set to launch this month on local broadcaster TF1. Starring Anne Marivin (Call My Agent) in the lead role, it follows Rebecca as she returns to life as a detective six years after she quit the Paris police force and abandoned the hunt for a serial killer. When she investigates a series of new murders, Rebecca believes the same killer has reemerged.

Obsessed by the case, betrayed by her husband and suffering from depression and crippling blackouts, Rebecca’s attempts to solve the crimes bring her hidden demons to the surface.

Based on the original series created by Hans Rosenfeldt and Nicola Larder, the French version’s cast includes Benjamin Biolay (Captain Marleau), Samir Guesmi (The Returned), Valérie Karsenti (Household Scenes) and Gregory Montel (Call My Agent). It is produced by Gaëlle Cholet and Sandra Ouaiss for Elephant and distributed by Cineflix Rights, which also handles sales of Marcella.

Ahead of the show’s TF1 debut on November 18, Marivin and director Didier Le Pêcheur, who wrote the series with Delphine Labouret, tell DQ about adapting Marcella and the challenges of making the series.

How did you both join the project?
Le Pêcheur: Me and Delphine were asked by Gaëlle and Sandra. As we had already seen and liked the original series, this was an immediate ‘yes.’

Marivin: I knew Gaëlle and I had previously worked with Didier on a few occasions. It was my first time embarking on a series of eight episodes. I was really conscious of the risk of a TF1 show like this one; it would mean a lot of exposure and it could box you in as an actress, but I was willing to take the risk and it ended up being such a wonderful experience.

What was the appeal of the story?
Marivin: The complexity of the character was a real draw for me. Also, I felt confident in Gaëlle and Sandra, who work for Elephant, a production company I know, and the cast attached to the project was really appealing.

Le Pêcheur: As a director, the most exciting thing was the numerous blackouts the main character experiences. There was an opportunity to place the audience in the exact same position as Rebecca – suddenly, she passes out and wakes up in a different place, sometimes with blood on her hands, without knowing what happened. I do not cheat with that: if she does not know, the audience does not know. This was an interesting and quite unusual way to keep the audience waiting to find out what happened during these black-outs – sometimes for many episodes – just like Rebecca.

Anne, how would you describe your character Rebecca?
Marivin: It’s difficult to describe her in a few words. She is a complex character. I admire her courage and her tenacity. She is also a character who has little morality, she’s not the best mother and neither is she a good wife. However, we find ourselves asking what one would do in her place.

What was it like to play Rebecca as she becomes entangled in the murder case and her own mental health issues?
Marivin: I got to discover something very unknown to me – her blackouts. I wasn’t able to bring my personal experience, as I have never experienced anything of the kind. Didier, though, was able to bring a really strong visual look alongside the DOP, which certainly helped. The character in the UK version is nearly at breaking point; she has little control over anything. Rebecca is more anchored and less unhinged, so we can project ourselves onto her character. Marcella is much more unstable.

What preparation did you do to get into character?
Marivin: Because of Covid, I had a lot more preparation time [the shoot was delayed for four months]. I worked on the psychology of the character with someone from the film world and explored with them what isn’t written on the page, dropping into the character though psychoanalysis. That was a first for me – I became the character’s ‘lawyer.’ For example, for a scene where Rebecca is hypnotised, we tried to find an organic way to play that moment and then went back to the script afterwards, having found the right way to deliver it.

How much of the original series did you watch?
Marivin: I only watched the first season before shooting. I needed to understand the universe but I also wanted to find my own way. After filming, I watched the two other seasons.

Did you speak to Anna Friel, who played Marcella?
Marivin: No – I wanted it to be that way in order not to influence my process. But I would love to hear what she thinks of the French remake.

Didier, how did the original series inform Rebecca?
Le Pêcheur: It did not. From the moment I started my work as a director on this project, I never saw the original series again. In fact, I forgot almost everything about it. The script unites two of the original seasons into one, so there were many changes, cuts and new scenes, though the main story remains mostly the same. Also, our characters were sometimes quite different from the English ones. Sets and casting, and also weather, unexpected events and even budget, also automatically bring major changes to the atmosphere and characters. I let or made all these changes happen, so this series is now mine, in every detail. Later on, I will see Marcella again and it will be fun, I guess, to check all the differences.

How did you want audiences to follow Rebecca through the story?
Le Pêcheur: By ‘being her’ and sharing with her all the questions she asks herself. My main purpose was always to be in her mind with my camera, to tell the story from the inside, whatever happens.

How do you normally like to work with actors on set? Was this series any different?
Le Pêcheur: I follow the actors. Except for stunt scenes or scenes that need special equipment, I never know how I’m going to film a scene. My great challenge is to find the right way in a few minutes, watching the actors playing the scene. The camera must never decide; it has to follow the meaning of what is happening and be at the right place with the right lens at the right time. I always start by bringing the actors on the set and asking them to play the scene without giving them any indication, then carefully watching them. Then I decide the best way to capture it. Instinct is the best way to do it.

Did you use particular equipment or camera techniques? How did you want to show the blackouts Rebecca experiences?
Le Pêcheur: We did a lot of tests for the blackout scenes with Anne and my DOP, before and during the shooting, to find a direction and build the appropriate tools. As the editing started during the shooting, we were able to try many possibilities and see the results. We also already had music and sound effects, as I always ask my composer Jean-Pierre Taieb to start creating music before the shooting starts.
To show the disorder in her mind, I didn’t want any two of these scenes to look the same. We used special equipment, ring lights and lenses – mostly very cheap ones or self-made systems – to get unexpected and, most of the time, unpredictable effects. The DOP also used filters that he held in front of the lenses with his hand while shooting. I wanted only ‘direct effects,’ so no post-production effects were used. Everything was done on set, with no possible way back.
This could never have been possible if Anne were not the incredible and trustful actress she is. Nothing in these scenes was written, nothing was carefully organised. We were looking for these magic moments, a few frames here and there. I said, ‘Roll the camera,’ and filmed while talking to her, the light crew and the DOP at the same time. It was risky but really exciting.

What was your experience like on set?
Le Pêcheur: If you have the right script, with the right actors and the right producers, you are the happiest person in the world. Even in the hardest moments – and there were some – I always remember that I started my life as a worker in a factory unloading wagons.

Marivin: I loved the experience, even though I shot for 100 days, which meant I had some very tiring moments. I was very grateful for being surrounded by such a supportive and caring team – the whole crew, including the cast and especially my co-star Benjamin Biolay.

What challenges did you face making the series?
Marivin: The process of ‘letting go’ in certain moments proved to be a challenge, as the character often lives in an imaginary, fantasy world. As well as the blackouts, I have never experienced the trauma of losing a child, so I had to find a way of playing emotions I had never experienced but playing them in a very organic way, which meant intellectualising the process first and then letting go in order to be as natural as possible.

Le Pêcheur: The main challenge was Covid-19. Every day there was the threat of having to stop shooting. It only happened once, for one week, so we were lucky. We were also filming people who live without masks, go to crowded cafés, kiss each other and shake hands while the whole world, including the crew, was forbidden to do it, stuck at home with no social life.
At night, we were driving home in a post-apocalyptic deserted and silent city. Sometimes I felt like I was making a historical or science-fiction series, as the life of the characters was so different from our lives at the time. I was asking myself, ‘How this will end? Will this series look absurd when it’s broadcast because life will have changed?’

Why might Rebecca appeal to audiences who are already familiar with Marcella?
Marivin: I think it will really appeal to those who are familiar with Marcella because we take a different approach with Rebecca. As it’s a French adaptation, [it will appeal more to Latinx viewers, for example,] who  are much more into feelings of affection, because there is more passion with the husband in the French version than in the UK version.

Le Pêcheur: Because we made so many changes. Some parts of the original series are not here, a lot of new scenes have been created. And the actors are all so incredibly good and different from the original characters. And please, if you have seen Marcella, wait for our final scene. You’ll be surprised…