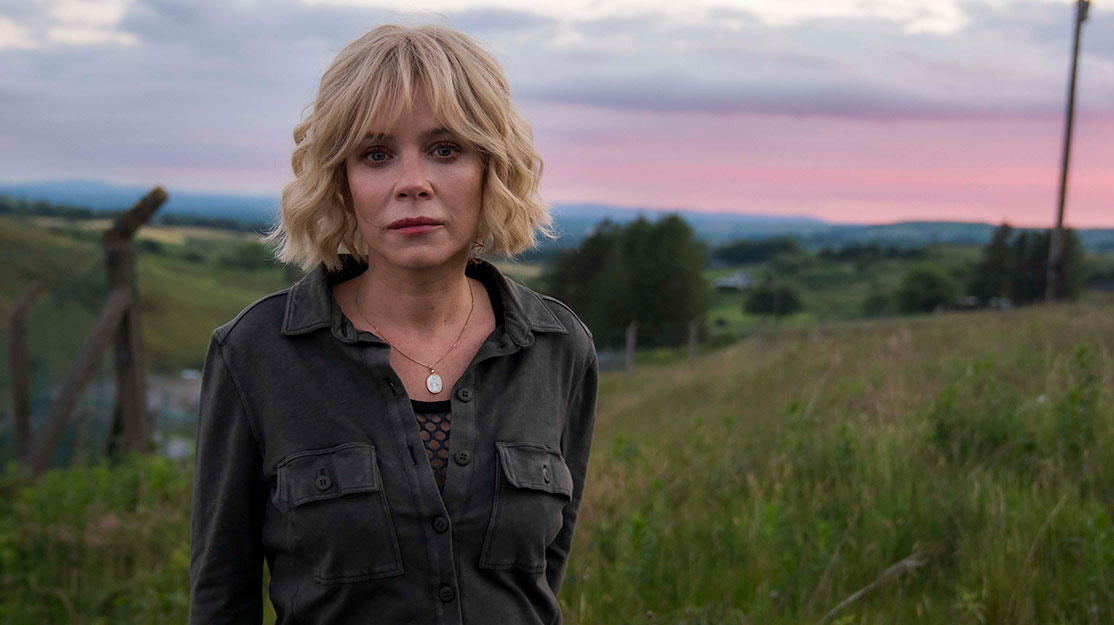 Marcella star Anna Friel and co-creator Hans Rosenfeldt discuss the new direction of the show’s third season, rebooting the series in Northern Ireland and Friel’s producing role behind the scenes.

It’s been three years since Marcella last aired on British television, and as the crime drama returns to ITV for a third season, the character played by Anna Friel appears unrecognisable. Not only is she now sporting blonde hair as opposed to her usual darker look, but she’s answering to a new name in a story that goes some way to rebooting the series after the first two dramatic seasons.

The detective has swapped her old life for a new start in Belfast, where she is working undercover and has taken on the identity of Keira Devlin to infiltrate the infamous Maguire family. But as she investigates their activities, questions arise about how far she has embraced her new persona and how much of Marcella she has left behind.

Hans Rosenfeldt, who created the series alongside Nicola Larder, wrote the first two episodes and outlined the other six, with the decision taken early on to reinvent the series with a new location and new challenges facing Marcella.

“It’s just really different. It’s not a show about a murder victim and then trying to find who did it anymore. This is a show about her being undercover and trying to bring down a crime family in Northern Ireland,” Rosenfeldt tells DQ. “We don’t really have the police station. We don’t have the team dynamic because we don’t have a team around her anymore. It’s set in a very different environment. And considering what happened to her in the last episode of season two, it was really hard for us to just bring her back as a functioning police officer in London again. She burned her bridges there. So we did this.”

While Marcella was originally pitched as a ‘British noir’ owing to Rosenfeldt’s previous credits, which most notably include The Bridge, the writer admits the move to Northern Ireland has opened up the tone of the series, though the titular character’s mental health issues and emotional problems still come to the fore through her role as an undercover detective.

“Obviously she is not fit to be an undercover agent. She shouldn’t do what she’s doing,” he says. “She’s also overstepping the boundaries really early on in the show. She’s still not very mentally stable as a character. And because we don’t have the police station and we don’t have a metropolitan city like London, it feels a little bit more open. It is not so dark, especially compared to season two, which was a really dark season both visually and in content.

“It’s a little bit more airy this time. There are still multiple plots but, since we don’t have the suspect interrogations or red herrings, it’s a pretty straightforward story: she’s undercover to bring down a crime family and dealing with the problems she stumbles upon doing that. It’s not a whodunnit. We don’t have a lot of red herrings or those twists and turns because it’s not a classic detective story.

“It’s an intelligent show, meaning you can’t really watch it drinking beer and tweeting at the same time. You really have to focus on it. She’s a very compelling lead character. Anna being Marcella is one of those things that you really want to see more of. You care about her and you want to know what’s happening to her. You feel for her when things are going wrong, which they do all the time.”

Marcella also continues to suffer from the fugue episodes that compromised her in the first two seasons, while embracing her new identity as Keira comes at the cost of her true self.

“She doesn’t want to be Marcella anymore because being Marcella is really, really painful,” Rosenfeldt adds. “But this woman [Keira] is quite fine, actually. What happens if she lets that person completely take over? That was a really interesting premise for the third season.”

“That’s really the arc of the season,” explains Friel. “Does she like being Keira a little bit too much because it helps her to run away from Marcella and the life she doesn’t want anymore? She’s ended up really enjoying who this woman is, the lifestyle, the cars, and is maybe wooed a little bit too much by the wrong things. We hope she stays on the right side of the law, but as far as her mental health is concerned, we dig much deeper into that.”

The actor, who won an International Emmy for her role as Marcella in 2017, says Rosenfeldt didn’t want a “rehash” of the first two seasons, but admits she was worried that losing the ‘whodunnit’ element might turn viewers off. However, Friel says that hasn’t been the reaction so far, having received positive feedback from viewers around the world who have been able to watch season three since its launch on Netflix last June.

“This is just about a family of really not very nice people, and it’s about her journey of redemption and dealing with what she’s running away from, because the past will always come to haunt you,” the actor explains. “You can try to bury it but it will always come back. We go into mental health awareness more and the horrific post-traumatic stress she’s suffering from. But does she prevail in the end? Perhaps she does.”

Though living with Marcella has been challenging for the star, this time around it wasn’t so much Marcella she had to get to grips with but her new alter-ego.

“The difficulty with this one was not going into Marcella’s headspace, it was getting into Keira’s headspace,” Friel says. “I’m playing two characters at the same time and we’re shooting none of it in sequence, so it was more of a challenge to navigate my way through that. The fugue states, I kind of enjoy doing because it’s very technical and it’s interesting. It’s like having a blackout or the worst hangover in the world but times 10. It’s becoming a lot more apparent now [in real life] and talked about that so many people do suffer from fugues, and it must be utterly terrifying. There aren’t as many fugues in this series, but there’s a significant one that is a bit of a game-changer for the show.”

Filmed in 2019, season three’s schedule saw production take place on episodes one and two before the back six episodes were all filmed concurrently. That meant Friel could face shooting scenes from six different episodes in one day. “Considering the trajectory of that character and the complexity of being Keira and Marcella and monitoring those, that was a little bit of a head-fuck,” she admits. “I had to write quite long diaries of where she was at and what she was doing.”

In season three, viewers can also expect to see a different side of Marcella, with her new look as Kiera bringing out more of her sexual side.

“Getting the blonde hair and that cut right was quite demanding, but what we ended up with worked quite well,” the actor says. “She’s not ever been very sexual. I thought it was very important we saw a woman in season one who’d been left by her husband, who’d been cheated on, and she didn’t particularly feel attractive. I didn’t think it was right to have silk blouses undone so we could see the outline of a breast. Whereas in this one, her sexuality is very much a tool and a weapon that she uses for destruction and to manipulate. It’s interesting investigating that.”

Friel’s role on Marcella is no longer confined to being in front of the camera, however, as she is also an executive producer on season three – which begins on ITV tomorrow – and took an active role in developing the story alongside Rosenfeldt and producer Buccaneer Media. She is also building her own projects and is particularly keen to help bring new actors to the screen.

“Butterfly was my first job that I produced. Nicola Shindler from [producer] Red wanted me to be involved from the outset, and I was offered that same thing with this,” she says. “I’m going down that avenue far more. I bought the rights to a book that we’re now negotiating with studios. It’s about passing the gauntlet on. There are so many incredible actors that just aren’t given the chance because they can’t get that first job. I was given that shot and that chance and I want to be able to do the same for others. There’s so much talent out there.”

After three season of Marcella, it’s hard to imagine anyone else playing the title role. Yet there was a point before filming season one that Friel considered pulling out of the series over her doubts about whether she could bring something new to the over-saturated detective genre.

Putting an androgynous, rock-and-roll spin on her performance helped allay those fears. “Music also helps so much with that,” she says. “I work a lot with music when I work and when I play her. She’s fearless and someone who’s so lonely and thinks she’s just not good at anything apart from her job, so she puts everything into her job. I just wanted to make her relatable, so hopefully I did my job.”