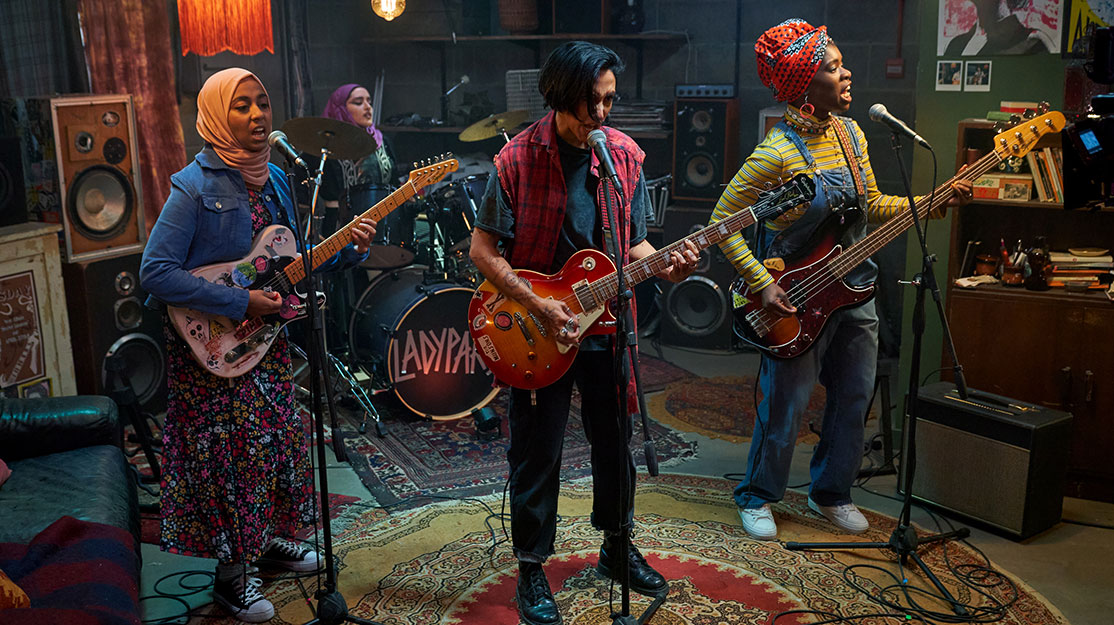 We Are Lady Parts writer and director Nida Manzoor and composer Shez Manzoor reveal how they created the soundtrack for the Muslim female punk band at the centre of this anarchic music comedy.

If you like your music with a blend of hash anthems and sour girl power, Lady Parts may just be the anarchic punk band for you, with songs such as Voldemort Under My Headscarf, Kill My Sister and Bashir with the Good Beard set to become the soundtrack of the summer.

The fictional band lend their name to new six-part music comedy We Are Lady Parts, which is set to air on UK broadcaster Channel 4 and US streamer Peacock. The show follows the fortunes of a Muslim female punk band on a mission to find a lead guitarist to complete their sound and maybe just get themselves a gig.

With a soundtrack boosted by an original score and music from Hole, Blink 182 and Nirvana, among others, the series introduces Amina (Anjana Vasan), a geeky microbiology student on the search for a husband but whose romantic failings and frustrations lead her to team up with the band – fierce and enigmatic frontwoman Saira (Sarah Kameela Impey), taxi-driving drummer Ayesha (Juliette Motamed), cartoon-drawing bassist Bisma (Faith Omole) and wheeler-dealer manager Momtaz (Lucie Shorthouse).

From writer and director Nida Manzoor, the series began life in 2018 as one of Channel 4’s online Comedy Blaps – the initiative that also gave life to shows such as Chewing Gum, GameFace and Stath Lets Flats. The following year, it was given a full series commission, with Manzoor drawing on her own experiences and seeking to upend stereotypes about women and identity.

“What was important for me was wanting to write something truthful,” she tells DQ. “I really honed in on that as I wrote it. I had my moments where I felt overwhelmed by it, but what ended up being my guiding light through the process was reconnecting to what I wanted to say, what my intentions were and who I wanted to show.

Lady Parts was always destined to be a punk band, with Nida finding inspiration in Muslim-American groups such as The Kominas who mix comedy and humour with songs about identity.

“I just think punk is just such a fun genre. It’s loud, it’s in your face, it doesn’t apologise for itself,” she says. “It doesn’t pander to the mainstream, and that’s why I wanted my group of women to also embody it. There’s a humour that comes with punk, a kind of cheekiness to it, which I also really love.”

The show’s soundtrack features original punk songs and covers, written and adapted by Nida and her siblings Shez Manzoor, who also scored the show, Sanya Manzoor and Benjamin Fregin. Early on, Nida knew she wanted Shez to score the show because “whenever I come into his room, he’ll be playing something. He has a very innate ability to just pick up the guitar and jam along.”

That process began with two weeks in an instrument-filled studio, where they spent time experimenting with different ideas. “It was super fun and we each covered a slightly different element of the process,” Shez says. “Nida would bring the initial idea and our sister Sanya would develop lyric melodies. I would do a lot of the chord structures and sketching out and then slowly it would all kind of take shape. By then, Benjamin had joined as well and he would be our punk advisor, making sure it was in that space of punk. We covered a lot of ground and it worked really well.”

For the score, Nida wanted music that sounded as though someone was just playing along live to the show – an approach that suited Shez’s love of improvisation. “I play a lot of jazz and blues, those are my favourite genres, although I do love punk, so I just wanted it to feel like that,” he explains. “A lot of the guitar solos are improvised. You can write a good solo but when it’s improvised and you’re constantly on the edge of knowing what you’re going to do and where it’s going to go, that’s when it really just hits and takes it to another level. That’s what I was trying to achieve.”

In contrast, the songs played by Lady Parts in the show are always story-driven, with Bashir with the Good Beard arriving amid a period of angst for Amina in the wake of a failed romance with Ayesha’s brother Ahsan (Zaqi Ismail). Another song, Fish & Chips, sees the band connect together for the first time. Other songs were simply inspired by funny lyrics and then Nida spitballing ideas with Shez and Sanya.

“It’s all really organic,” Nida says. “I wanted one big song per episode, so there are four originals and two covers, which are just punk covers of really epic songs. But weirdly, we were quite chilled somehow. Now, looking back, I’m like, we were really relaxed about it, which I hope meant everything we’ve got in there is pretty fun and organic.”

Performances aren’t simply confined to the band’s bedsit rehearsal space. One dream sequence sees Amina pick up her guitar in her bedroom as her wardrobe transforms into a stage, providing space for the character to reveal her inner thoughts via performance.

“I was always looking to see where we could have a nice moment to show Amina’s internal life in a fun, silly way,” Nida says. “That’s something that definitely keeps on through the series. It isn’t always a musical number – sometimes it’s a horror thing or something that plays with the genre. That’s also something Shez had to do; it isn’t an all-punk score. There was sometimes an orchestral bit he’d have to do, which he just did somehow and nailed it. And there’s some horror stuff, which is much more atmospheric. It was really interesting for us both to find the limits of what we can do and say like, ‘Oh, Shez can totally smash out an orchestral score.’”

Berlin-based Fregin would use musicians to record instrumental versions of the songs, which would then be sent back to the production team to lay temporary vocals on top of the music. The vocals were then re-recorded live by the actors in the band as they played along to the backing tracks, fulfilling Nida’s ambition to create a real band that viewers could believe in.

“I wanted to create that raw, real sound and hear the nuances of their voices so it had that DIY spontaneous punk sound,” she explains. “Shez had to teach the actors how to play everything, which was a long process. There was more music rehearsal than there was acting rehearsal.”

“They all did really well in the end,” Shez says. “They were all at different levels of experience. Anjana plays guitar but more folk stuff, and Juliette has rhythm but had never played the drums. Faith had never played the bass. It was challenging, but they were all willing to learn. They put in a lot of work and it was really cool and fun to see them progress. I pretty much knew every beat of every song and had to teach every instrument. By the end, they could pretty much play the songs without the backing track. We could just switch it off and let them do it.”

As the show’s director, Nida was inspired by comedies such as Spaced and director Edgar Wright’s use of the camera to amplify the show’s humour. She also sought to create two visually different worlds – that of Amina’s student life at university and the world of the band.

“We wanted to go for a very grunge, punk feeling in the bedsit and we added film grain afterwards,” she notes. “We wanted to make it quite grungy and punky and a bit gross, and then for Amina’s world to be more pastel and calm and steady. Even the way we shot Saira’s character, the lead singer, and the way we shot Amina was very different. With Amina, we were much more composed and very stylised, like she’s in her own graphic novel. Then with Saira, the camera was more handheld and a little bit more unpredictable, like the character. We really wanted the cameras to mirror what the characters were feeling, as well as having a real anarchic sense of fun.”

Filming took place in East London, where performance space The Drumworks was transformed into a studio featuring most of the sets and locations depicted in the series. External location work in Hackney and Whitechapel was kept to a minimum owing to the Covid-19 pandemic, with Queen Mary University doubling for Amina’s own university. While shooting was unaffected by the pandemic, Shez did have to conduct some online music lessons to begin with until everyone could get into the same room.

“If I could make my dream show, this would actually be it because I wanted to write music with my siblings because it’s so much fun,” Nida says. “Every time we had a music scene, I was so excited to be on set because we were shooting a song. The actors were really excited about it too.”

Unsurprisingly, those sequences were often the most complicated to shoot. The director used a single camera to capture the numerous wide, mid-range and close-up shots of the band and the individual members as they performed, with the cast often instructed not to go full throttle if they weren’t in shot on a particular take.

“It was physically tough on my DOP,” Nida says of working with Diana Olifirova. “What I really love about the way she shoots is she’s very responsive to the way the actors are moving. She moves with them, and her handheld camera is incredible. I did wides, mids and close-ups because close-ups are just so cool and punk, and on the mid shots you can see them actually play. I wanted to have that freedom in the edit to show how amazingly they can play, but also to then go close when they’re doing some great punk faces.”

Fans of the show will also be able to listen to Lady Parts’ songs online after it debuts on Channel 4 tomorrow, ahead of its release on Peacock on June 3. The series is produced by Working Title Television, part of NBCUniversal International Studios, and distributed by NBCUniversal Global Distribution.

“Ultimately, it’s quite a universal story,” Nida notes. “Amina as the lead character is someone who’s trying to find her place, feeling like an outsider and wanting to own all the different aspects of her identity. That’s something that transcends any one culture or person. I hope people find it funny and come to it for that reason, as it’s a funny show. Comedy is the best.”