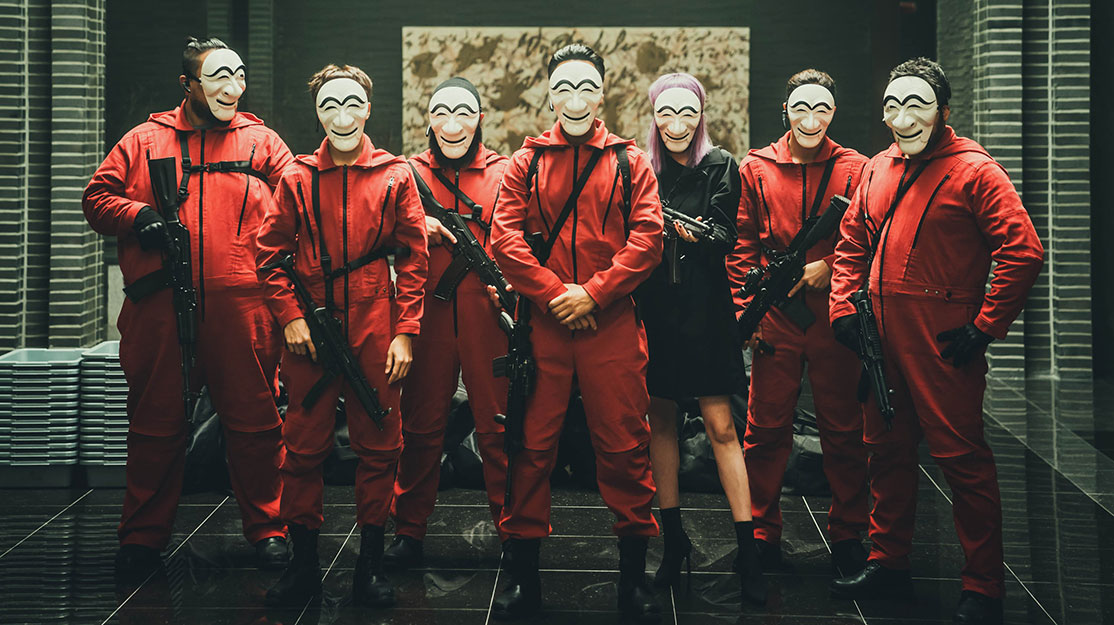 A unified Korea provides the unique backdrop to Money Heist: Korea – Joint Economic Area, an adaptation of Spanish sensation La Casa de Papel (Money Heist). Writer Ryu Yong-Jae tells DQ about his love of the original and creating the world of this remake.

There are the familiar red jumpsuits, a motley gang of thieves hiding behind masks and their mysterious leader known only as The Professor. But in Money Heist: Korea – Joint Economic Area, the political and cultural landscape of a futuristic, unified Korea provides an altogether alternative and somewhat dystopian backdrop to a series based on Spanish global phenomenon La Casa de Papel (Money Heist).

Opening in 2025, the series sees North Korea and South Korea declare a joint economic area (JEA) designed to bring together a new united front between the opposing ends of the peninsula. It also promises shared cultural interests – K-Pop sensations BTS play in North Korean capital Pyongyang – and the creation of a single currency.

It’s here that a young woman from the North travels South for new opportunities but finds herself stuck in a dead-end job as her dreams of prosperity fail to materialise. A year later, she is robbing loan sharks when, beaten and bruised, she is pushed to the brink of suicide.

Just at that moment, a mysterious stranger known as The Professor emerges from the neon-lit shadows and offers this woman, who we later know by her nickname Tokyo (Jeon Jong-seo), the chance of untold riches. The Professor then assembles a squad of thieves and robbers – carrying the familiar nicknames of global cities and wearing traditional Hahoe masks – to carry out an audacious plot to steal four trillion won ($3.1bn) from the Unified Korea Mint.

Fans of La Casa de Papel will remember what happens next, as the gang first gain entry to the Mint and then carry out the Professor’s plan, which is explained via flashbacks. Meanwhile, the Professor (Yoo Ji-tae) is equally involved with a plan of his own to charm police inspector Seon Woojin, who is leading the negotiations with the gang.

But while Money Heist: Korea sticks to the script in some places, it is the backdrop of a unified Korea that gives the show its originality. The police mission to take back control of the Mint marks the first joint operation between the two previously separated nations, while Seon (Yunjin Kim) is under pressure to resolve the crisis before a landmark political summit.

Writer Ryu Yong-Jae was an instant fan of the “stunning” Spanish series and thought a Korean remake would be a compelling proposition. But he never imagined he would have the opportunity to write an adaptation until the series producer pitched him an idea for a story that would be uniquely relevant to North and South Korea.

“Currently on the Korean peninsula, guns are banned and because three sides of South Korea are covered by oceans, it’s very hard to run away with a big amount of money,” Ryu tells DQ. “At the top we have North Korea. If we tried to follow the exact storyline of the original, that would be difficult. But we added the premise of the Korean peninsula on the cusp of unification, plus the imaginary city of the Joint Economic Area, and I knew this could work and that it was going to be very exciting – and something uniquely Korean too.

“Of course, I was very nervous about remaking it because it was such a big hit, but we planned out the way we were going to go about it and we showed it to Netflix and to Alex Piña, the original creator of the Spanish series,” the writer continues. “We had lots of Zoom calls. Alex said Korea and Spain actually have a lot in common regarding their history, social background and the characteristics of their people, plus he told us a new Korean lens, with inter-Korean relations and the Korean peninsula being on the verge of unification, was actually very interesting. That’s how we started to remake the series.”

While Money Heist: Korea is set in a futuristic, alternative world, the main themes of the original series, such as the divide between rich and poor, remain. After the establishment of the JEA, North Koreans venture South in search of greater prosperity, but find that the gap between rich and poor is only widening. That discovery leads Tokyo to almost give up on life, before the Professor pulls her out of a rain-soaked gutter.

“Korea is the only divided nation right now and I think the issue of unification, the issues between the two Koreas, is a challenge we have to overcome someday,” Ryu says. “But everyone has different ideas about unification. What I thought was most important to convey was the message the original series was trying to convey, which is about the wealth gap and who prints money and for whom.

“These are questions we also wanted to address, and I thought if the two Koreas did become united, it’s not just the sense of two nations becoming one but it’s also about the potential for some social friction. After all these years, there could be some hatred and economic issues of the rich getting richer and the poor getting poorer, so I really wanted to melt these issues into the show.”

The biggest difference between this new series and La Casa de Papel is the time in which the show is set. “Through this girl from North Korea, Tokyo, we are showing the environment and the history of the situation. That’s how we start the show,” Ryu says. The writer then found he had a “whole new playground” for the characters that naturally changed their personalities and the way the series would play out, both for the robbers and the police.

“I loved every aspect of the original so I didn’t want to try to think of ways to change different parts of it. We have this new playground, so we have different characters and different stories that are natural to this playground,” he says. “Going forward, there are going to be aspects that are quite different from the original.”

When he read Piña’s original scripts, Ryu was particularly impressed by the number of characters and the way the series creates love, hate and conflict between them. “But in the midst of all that, he keeps this rhythm and cadence. It’s almost musical to me,” Ryu says. “So despite what kind of story we’re going to tell, I wanted to make sure to keep that same cadence and rhythm in the Korean version.”

Ryu did want to bring some characteristics of Korean people to the series, however. “In the original, [the gang] sometimes sit back and relax while they’re in the midst of the heist. They make love and they do other things while they’re in the Mint,” he says. “For Korean people, I thought they would focus more on the heist itself. There are fewer sexual scenes in the Korean version, only for two couples, but I created other dramas for the other couples in the show.”

Ryu’s previous credits include such series as Liar Game, Psychopath Diary and Monstrous, while he also wrote Netflix Korean original My Holo Love, which launched on the streamer in 2020. He usually works as the head of a team of writers, and brainstorming sessions can become “very fierce meetings.” But looking back on making Money Heist: Korea, he identifies two distinct differences from his usual process.

“Then in Korea, usually a writer just writes their script and doesn’t really follow the process in post-production or during filming itself. But this time I had such a good collaboration with the director, Kim Hong-sun, and because this was such an important show to me as well, I went to the set a lot of times to check on how everything was going and to see how the cast was acting. Every time there was an edited cut, I also went to the editing room to monitor how it was and to follow up on that.”

Making a series based on a global hit such as La Casa de Papel, Ryu felt pressure to recreate that success, not least because he was such a fan of the original series. As such, he says he felt like a fanboy writing the scripts and enjoyed the process of working in an imagined, unified Korea.

“In the original, it’s just conflict, betrayal and love and hate between the robbers and the police. This time we added a new layer of conflict, love and hate between the South and the North. It’s within the robbers and within the police,” he says. “I thought that layer would definitely add more excitement to the story. I really enjoyed the process as a whole and I think it’s a really entertaining show. It’s like a festival, that’s how I thought about it – like a festival started in Spain and we are having that festival in Korea now.”

And if there were one thing he would tell himself about the challenge of remaking La Casa de Papel if he could go back in time? “I don’t think I would have any advice to give myself because I really did everything I could,” he says. “I don’t have any regrets.”