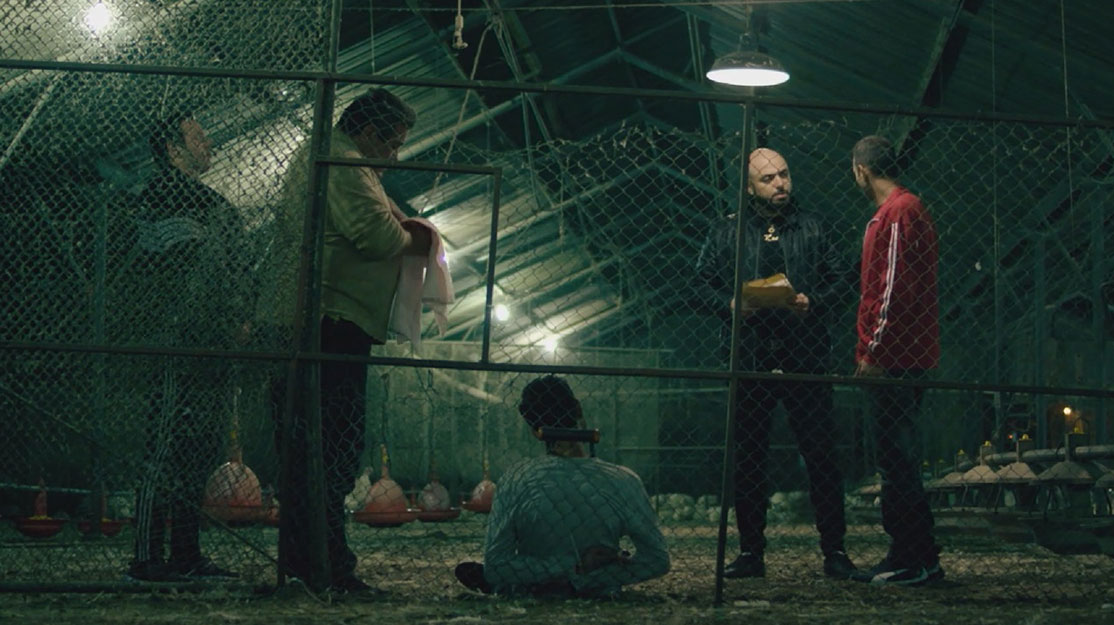 Israeli drama Manayek won multiple awards this year for its story of a veteran cop working a police corruption case in which his best friend is the prime suspect. Writer Roy Iddan and producer Yoav Gross reveal how they made it.

Airing to audience numbers that made it one of broadcaster Kan 11’s highest-rated dramas ever, Israeli crime thriller Manayek confirmed its status as the country’s biggest series of the past year when it won awards for best drama, director, screenplay, leading actor and supporting actor at the 2021 Israeli Academy of Film and Television Awards.

Created and written by Roy Iddan (Kfula) and directed by Alon Zingman (Shtisel), the 10-part first season introduces Izzy Bachar, a veteran internal affairs investigator who stumbles upon a police corruption case where the prime suspect is his best friend, Barak Harel. On the surface, Barak is an honourable and decorated officer, but as Izzy digs deeper, they find themselves in a ruthless game of cat and mouse that places them on opposite sides of the law.

The series, produced by Yoav Gross Productions, is now in production on S2, while distributor Cineflix Rights has sold the show to HBO in Latin America and Arte for audiences in France and Germany.

“It’s been a very special year to win all these awards,” producer Gross tells DQ. “We had fierce competition – for example, Losing Alice, which was sold to Apple, didn’t even make the cut for the top-five shows. We also had Tehran and Valley of Tears running against us, so we are very proud, especially this year.”

Writer Iddan believes Manayek’s success resulted from the confluence of two factors. “The first one is that its subject matter hits very close to home,” he says. “People love cop shows. They like shows about dirty cops. They feel like they know this world. The subject matter is very attractive to people. And at least in Israel, it [corruption] hasn’t been dealt with so much. It’s done in a very realistic way. We managed to strike a chord with that.

With lead characters portrayed by Shalom Assayag (Izzy), Amos Tamam (Barak), Kaya Dagan (Ronit), Liraz Chamami (Tal), Ofer Hayoun (Eliran) and Orna Pitussi (Eti), “another element was the casting,” Iddan continues. “It was cast in a way that appealed to wider demographics of viewers who maybe don’t [normally want to watch] drama and was made up of amazing and very famous Israeli actors. It really paid off on that level.”

Authenticity and realism was key to the series from the outset, with Iddan leaning on his experience working as a volunteer patrol officer in Tel Aviv. “It was my really weird hobby for several years,” he jokes. “There were no shows about internal affairs investigators, and I was like, ‘OK, this is a great idea for a show where the cops are the bad guys.’ It hasn’t been dealt with as a major arc of a show ever. It’s usually only a minor thing in cop shows.

“Then I started working and doing a lot of research; there’s such a treasure trove of police corruption cases in Israel and I’m sure it’s the same everywhere. It’s a world of content. It’s amazing to explore. People latched on to it because it’s not a classic cop show. People know the establishment is rotten. The police force has a lot of rotten elements to it, and people latched onto it because they understand it’s something real and it speaks something about their actual lives.”

At the centre of the show is the relationship between Izzy and Barak, who share a close bond at work and at home, with Izzy’s wife Eti also working as a cop. But when a young officer is arrested on suspicion of murder, he claims Barak is at the centre of a widespread ring of corruption – an accusation that threatens to destroy the central duo’s friendship.

With Izzy, “I wanted to create a hero that’s kind of like Sisyphus [from Greek mythology], who has a constant struggle from all sides,” Iddan says. “I didn’t want it to be just him investigating a random dirty cop, so let’s make it his best friend. His wife is a cop and his dad used to be a cop. He’s alone in a sea of cops all the time, so I liked the idea of this guy who’s in a constant struggle with everyone around him. It just seemed interesting to me.”

Before the action begins to unfold, the first episode spends a lot of time introducing the characters, building up their relationships and demonstrating the police ‘banter’ between them that the series will then spend the next nine episodes ripping apart.

“The whole show is encapsulated in this opening,” Iddan notes. “You learn everything you need to know about what’s going to happen in this season from watching that scene. It really sets everything up. You really have to understand the relationships because a lot of it is about the way they talk to each other.

“There’s a very certain way cops talk to each other. I’m sure it’s the same around the world. It’s this kind of black humour and a lot of duplicity. It’s all politics and there’s cliques and they’re trying to outmanoeuvre each other. I really wanted to set the tone so people understand the language of the show and the main relationships of the show, which will carry on throughout the entire season and onwards.”

Iddan first took Manayek – a Hebrew slang term for the police translated in the series as ‘Rats’ – to Gross when “it was basically just an idea, just a piece of paper,” and the pair started working on it together, initially pitching it to another broadcaster before Kan picked up the show. Gross and Iddan had previously partnered on shows including stand-up comedy drama Punch and teen musical comedy Kfula, and the producer admits he was surprised when Iddan then brought him the outline for a police drama.

“It’s a cop show but, in my opinion, it’s also like a mafia show, because this cop Barak is running a crime organisation inside the police,” Gross explains. “He uses all the police officers at the station to work in that crime organisation. Izzy is chasing his best friend at the beginning, not believing that it’s his best friend doing that. Then when he comes to realise that is the case, he hunts him down. That’s the heart of the story. It’s not a regular cop show.

“It’s also the kind of show that makes you think. What would I have done if I were in that position, if my best friend for many years was doing something wrong? Would I go after him or would I defend him?”

Perhaps the most logical decision for Izzy would have been to recuse him from the investigation, an option that is handed to him at several points throughout the series. But initially unwilling to believe the accusations against his friend, he stands firm, determined to discover the truth for himself.

“You sympathise with him, but you also don’t understand why the hell he would do that to himself,” Iddan says. “He’s a hero and he has this moral compass and sense of justice to pursue. But there’s an element of self-destruction. You admire him and then, at a certain point, you start to be like, ‘OK, what’s this guy doing? He’s destroying his life. Why is he doing that?’”

“Casting Izzy was also very important for the success of the show,” says Gross. “Shalom is one of the top three stand-up comedians in Israel. He isn’t known for his drama skills; it’s his first drama role. And he won the award for best drama actor in his first drama role. It was very surprising for people who have known him for 30 years in entertainment shows and stand-up comedy shows.”

Despite having previously worked with writing teams, Iddan took the decision to write Manayek himself, drawing on several true stories and his own experience working for the police to make an ultra-realistic series.

“Bringing someone else in would only complicate it,” he says. “I had a script editor, and Alon the director, Yoav and people at Kan also gave feedback, but I worked on it almost entirely alone. Because the subject matter is so complicated, just to explain it to somebody else would take me so long. I thought I was better off doing it alone.”

One thing that helped improve the series, says Gross, is the fact it was originally planned to run to 12 episodes. However, “for various reasons” in the lead-up to production, the broadcaster then decided to reduce this to 10. “It was very good for the show because it made everything very intense,” Gross explains. “Every episode had so much in it. It was one of the keys to it being such a great show – it has enough drama for 12 episodes in 10 episodes.”

Iddan’s scripts, alongside the production design, costumes and sound design all contribute to the authentic look and feel of the series, which were further enhanced by the specific filters and lenses used during production. “And the fact that everybody is smoking indoors all the time, although it’s completely illegal in Israel,” adds the writer. “It’s a lot of little things, like the photocopier in the corridor.

“To me, the realism wasn’t a challenge, it was a duty. There was no other way [to make the show]. This was how we were going to do it. It just requires attention. You need to shoot the show somewhere anyway, so make sure it’s someplace that will look authentic.”

As crime series, particularly true crime, are proving immensely popular around the world, that level of accuracy has never been more important. “It has raised the bar,” Gross says. “People are so much more into police investigations and crime stories. They know all the bits and pieces, so you need to be very accurate. Ordinary people now understand the tiny details of police work and crime, so you need to spot-on all the time.”

With season two in production, Kan has also greenlit a third season of Manayek, giving Iddan plenty of scope to continue Izzy’s war against police corruption in future episodes, particularly now that the writer regularly receives tip-offs and calls from whistleblowers with their own stories. The series also drew the interest of politicians.

“Part of the success of the show here is that it really came out at a time when there were huge scandals involving the police, the state attorney’s office, the Ministry of Justice… There was a lot of muck out there anyway – it went out just in time to stir it even further,” he says. “It also caused more journalistic interest in internal affairs, for example, so it really made a huge splash outside of the world of TV.”

“It really showed people how the system works and how they [police officers] defend the establishment, because they grow up together, they go up through the ranks together, become very good friends and take care of each other within the establishment,” Gross adds. “The show put a spotlight on that specifically and how the system takes care of itself.”

When season one came out, Iddan worried that the show and its exploration of internal police operations might be too complicated for viewers. But if anything, he has been emboldened to push the series further with S2.

“I really learnt that my worries were completely unfounded,” he says, “because people liked that it’s complicated and challenging. So season two is even more complicated! People loved the fact it reminds them of something real and that it’s all about corruption.

Season two, he says, will also be “more personal, more bloody and more dirty. Corruption rises even higher than in season one. Hopefully it’s going to be a delight.”