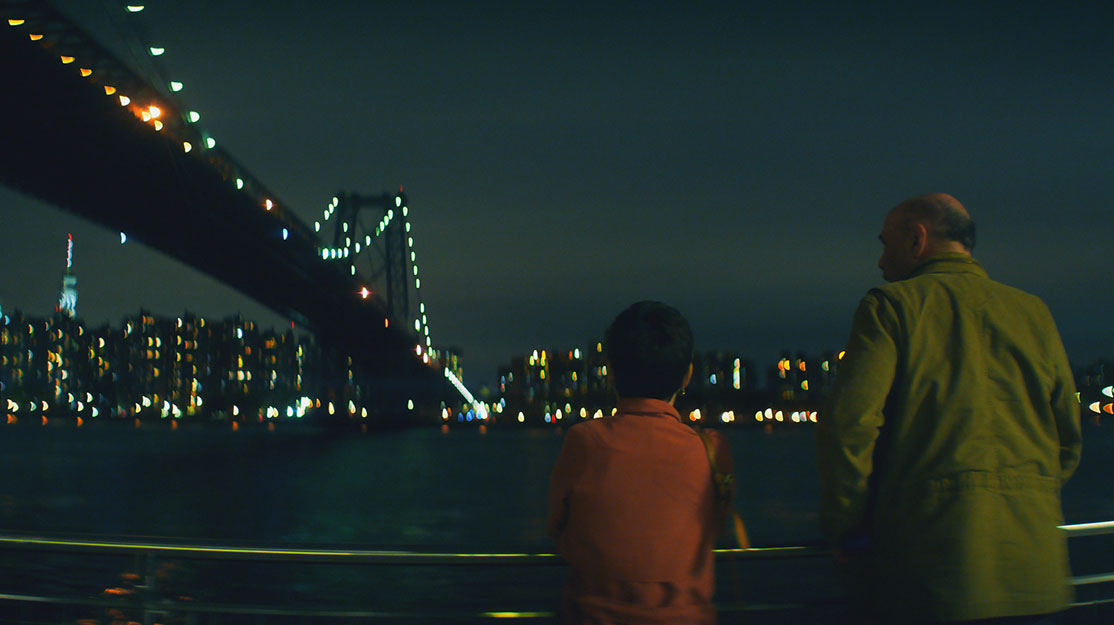 Making it in Manhattan

Richard Yee, co-creator, co-writer and director of Sky1 comedy drama Sick of It, discusses a scene from the season two finale that took the production to New York. The series is produced by Me + You Productions and Alrite Productions and distributed by BBC Studios.

In season one of Sick of It, main character Karl retreated into himself after the end of his relationship, with only the voice in his head for company. In season two, Karl is still riddled with self-doubt and insecurities, but more hope has crept into his life. He’s started to venturing outside his comfort zone and has unexpectedly fallen for his aunt’s carer, Ruby.

The season finale brings this to a head when Karl reluctantly travels to New York to tie up some family business and Ruby takes it upon herself to join him. The scene is then set for them to finally get together.

From the beginning, when co-writer Karl Pilkington (who also plays the lead character) and I sketched out the arc of the season, we always wanted the storyline to take us to New York, and it was always my intention to film it there too. The trip to New York was the culmination of a slow-bubbling attraction that had developed between Karl and Ruby in the series, and a realisation in Karl that he’s got to let himself live a little.

From standing in a dated living room staring at his uncle’s coffin at the start of season one to running through the colourful streets of New York with Ruby at the end of season two, Karl’s mindset had changed, and the city was a living, breathing manifestation of the hope that had crept into his life. I wanted to capture the energy of New York on screen and for that to seep into the performances. I also had great cinematic ambitions for the series, so New York felt like the perfect location to bring it to a climax.

Of course, we were never budgeted to film in New York, so the inevitable question of ‘Why don’t we just fake New York in the UK?’ or film against a green screen was bound to come up… and come up it did. Again and again and again. In fact, halfway through production, we were still struggling to make New York work on our budget and it came up again, before an alternative suggestion was put forward – that we rewrite the finale and set it in Scotland instead.

As much as I love Scotland (I’m half Scottish, half Chinese), I was more determined than ever to stick to my original intention. I pushed back until finally production pressed the button and booked our flights to New York.

When we arrived a few days before the shoot to prep, the omens weren’t good. As soon as we hit Manhattan, street after street, many of which were on the route our scout had previously recce’d for our opening scene, were now dug up. The New York Department of Transportation had chosen the week of our filming to dig up Manhattan’s avenues and start resurfacing the roads. To add insult to injury, our hotel was directly next to a section of road they had chosen to dig up that night. They call New York the city that never sleeps, but they don’t tell you it’s because they dig up the streets in the middle of the night.

When Karl Pilkington and Marama Corlett (who plays Ruby) arrived a couple of days later, the roadworks were still underway outside our hotel. And in a mirror of what happens in the episode, they ended up in adjoining rooms. While I recce’d and prepped with my new production team day and night, Karl and Marama hung out in New York together. We’d bump into them randomly in the street as we scouted spots to shoot, and later at night would run into them in bars completely by chance.

We hadn’t even started filming but, by sheer virtue of being in New York together, they were living out their roles and developing their chemistry without realising they were even rehearsing. Things were looking up again – but then came the day of filming.

First up was a scene in an iconic yellow taxi. We’d planned a new route that avoided the resurfaced roads and roadworks and were all set to go. If only the same could be said about our picture car. The engine overheated en route before an actor or camera had even got close to it, and the driver had to turn back and pick up a new car from Brooklyn. Two hours later, we eventually got on the road. It wasn’t the best of starts.

Over the next two days shooting around Williamsburg (Brooklyn) and Manhattan, we managed to make the time up, working at a fevered pace. There were times I wasn’t sure if we ‘got it,’ but my New York script supervisor, Anna Lomakina, who had had just come off Lulu Wang’s The Farewell and Charlie Kaufman’s latest film, knew the city well and helped me tune into the frenetic rhythms of New York and how you film there.

Even if you have the resources, you can’t control New York. You can’t wait for trains to stop, or silence to fall before calling action. You have to embrace the chaos of it. The Safdie Brothers, whose brilliant new film Uncut Gems is based in New York, are masters of this. They never close down roads. Instead of stopping members of the public walking through the frame, they encourage it, and the cast play out their scenes in as close to a real-world environment as possible. They embrace chaos in a way that’s anathema to most filmmakers but manage to bottle the spirit and unpredictability of New York in a way that feels alive.

Our final night in New York revolved around another driving scene, this time through Manhattan at night. Editorially, we wanted as much colour and light on the streets of New York as possible, to contrast with the more subdued colours of Karl’s world in the UK.

Invariably, that drew us to Times Square. No one in their right mind drives through Times Square, let alone tries to film a scene there, especially where continuity of background and performance is needed. But that’s what we did. Even at midnight, the traffic was stop-start and it was near impossible to match speeds against the backdrops. The continuity nightmare was made worse when it started raining halfway through. To save time, I was jumping in and out of the following vehicle myself to wipe dry the picture car to keep a modicum of continuity.

It was nerve-wracking having no control, it was one of the hardest scenes in the series to edit and there’s no doubt it would have been much easier to film in the UK in a studio. But it just wouldn’t have been as good. The lights looked beautiful on our vintage lenses, the excitement of actually being in New York rubbed off on the cast and their performances; and when you watch the scene, you share their excitement of being in New York for the first time.

I have no regrets and would take the real New York over a green screen any day of the week.