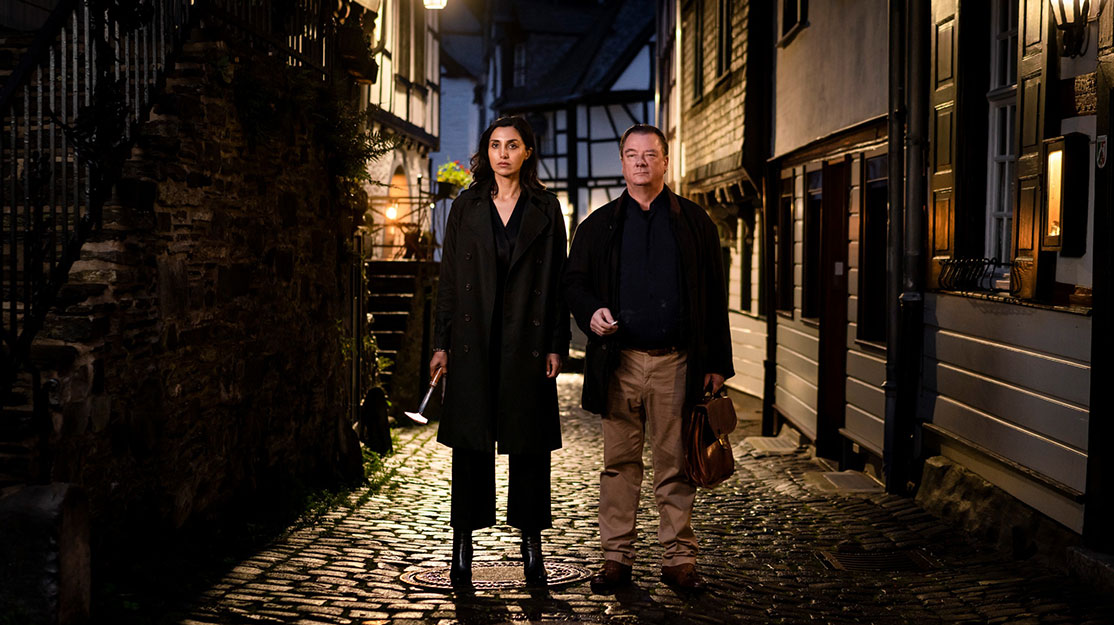 Peter Kurth and Katharina M Schubert speak to DQ about their roles in German drama Glauben (The Allegation), which places a brilliant but unconventional lawyer in the middle of a legal scandal rooted in real events.

In the 1990s, 25 men and women from the town of Worms in Germany faced a criminal trial after they were accused of being part of a child abuse ring. But what is believed to be one of the largest cases of its kind in the country’s history led to the acquittal of everyone involved following contradictory allegations, incorrect timelines and unreliable questioning.

Those real-life events have now inspired a seven-part series called Glauben (The Allegation), in which a paediatrician (Katharina M Schubert) in the small town of Ottern believes a young girl has been raped, setting in motion a chain of events that leads to 25 defendants facing charges of running a child pornography ring during 300 days of court proceedings. With social media users calling for those accused to face the death penalty, Staatsanwalt Cordelis (Sebastian Urzendowksy) steers the prosecution.

On the other side of the courtroom is Dr Richard Schlesinger (Peter Kurth), a brilliant but unconventional defence attorney who uncovers evidence of false statements and suggestive questioning methods. Meanwhile, spending his evenings drinking and gambling, Schlesinger falls into debt with the Chinese mafia, who send Azra (Narges Rashidi), a former client of his, to ensure he repays what he owes.

The series, commissioned by broadcaster RTL for its TVNow streamer and Vox channel, Glauben is the first television project from author Ferdinand von Schirach. Directed by Daniel Geronimo Prochaska, it is produced by Moovie and distributed by Fremantle.

The series received its international premiere at French television festival Canneseries, where it won the competition’s Dior Grand Prize and von Schirach picked up the best screenplay award. Kurth and Schubert were on hand to speak to DQ about making the series.

How did you both join the series?
Kurth: I know and read everything from the author and was really happy that something was offered to me from him. Then I found myself in the character. I felt like this part was written for me. The questions the character asks himself are the questions I also ask myself every day – philosophical kinds of questions. I could really see myself there. He’s a rich character who contradicts himself. He’s not simply good, bad, or broken. He is also really funny and doesn’t take himself too seriously.

Schubert: I read the script – it’s based on a real case but I didn’t know the case – and I thought it was very well written. It has so many twists and turns, and the question of guilt is not so simple; there are no simple answers. All the characters mean well but do wrong and are moody, and it’s a very complex story. I thought it was really well done, and it’s also funny. It has this dark humour.

Katharina, we see your character at the end of episode one when she first raises her suspicions of child sexual abuse. Tell us more about her.
Schubert: She is a child psychiatrist and is the one who thinks she discovers children have been molested. She goes to court with this case and makes it her life’s mission to have these men and women put into jail. Then questions are raised about whether they are really guilty or if she just believes they are. It’s based on a true story and this woman was real. She still believes everyone is guilty.

Kurth: The child molesting case is the real story of the series, but the first case we see [in episode one] is mainly there to introduce my character.

Peter, your character is a brilliant but out-of-sorts lawyer struggling with debts and drinking. Where does the series take him?
Kurth: He is at a crossroads in his life and he knows that if he keeps on living the way he is, he will die. The question is, will he get out of it? Will he be able to pull himself together or pull himself out of this misery? He knows it his last chance.

He also has an intriguing relationship with Azra. How would you describe it?
Kurth: They come from extreme, different backgrounds but they have the same vibe. They have similar views about justice and how to change things that have to be changed. But they are on different sides of the law: one is defending the law and one is breaking it. Azra is breaking it to get justice done. Over the series, they have time to grow together.

Schubert: In one scene where Peter’s character buys fish, we won’t see the shop assistant character again but it’s a big, big scene. It has lots of humour in it. It shows off Peter’s character, and Ferdinand has much more interest in that. I feel like we don’t have twisted plots very often in Germany, but here the question of guilt goes from one side to the other. You don’t know the ending and it will turn and turn. As the audience, your moral standards are being challenged, and the characters you like are not necessarily all good people, which is really interesting.

What do you remember most from filming the series?
Kurth: I really enjoyed following what was already so beautifully written and adding things through the acting process to this complex character during shooting. [For a restaurant scene between Richard and Azra], eating 16 oysters in one day was challenging. They could have given me something different but it wouldn’t have been right, so I used it [in my performance] because I don’t especially like oysters. They even made something that looked like an oyster for me to eat instead, but it wouldn’t have been right.

Schubert: We have a very big scene where we discuss in philosophical terms the concepts of justice and guilt and being prejudged, because the show is also about hysteria. Somebody tweets something and then one person’s life is ruined, even though they maybe didn’t do anything wrong. We have a 13-minute scene in which we discuss this, so that was the biggest challenge for me – to know all the lines. We filmed it a lot from every angle. It’s a discussion of philosophical substance, so that was nice.