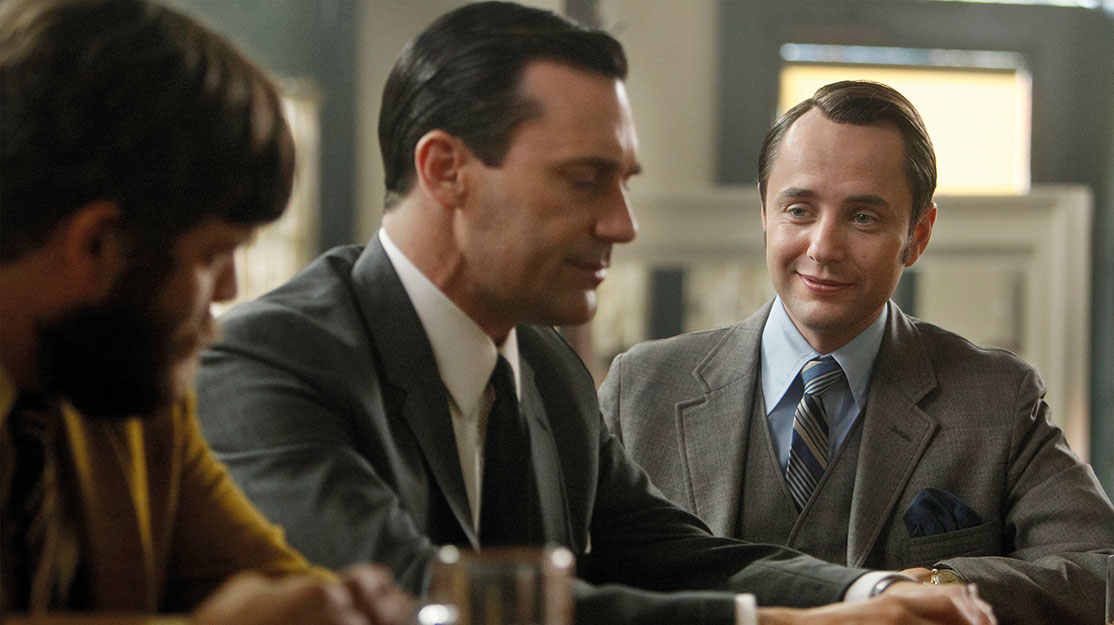 After spending the first season of German wartime drama Das Boot aboard a submarine, US star Vincent Kartheiser is back on dry land for the show’s second run. But when it comes to filming, he’s still a long way from home, DQ discovers.

Vincent Kartheiser is leaning back in the booth of a stylish American diner, looking decidedly relaxed among the 1940s-era paraphernalia. But this isn’t a retro-styled restaurant and it’s not even in the US. Instead, he’s sitting in one of the sets built for the second season of German wartime drama Das Boot, a stone’s throw from the vast, sandy beaches at Formby, Liverpool, on England’s north-west coast.

“You can’t actually shoot New York for the 1940s anymore because of all the billboards and all the signage in the streets. It’s all changed anyway,” he says. “When I did Mad Men, we shot in LA. Everything’s changed so much since the 40s that even if we went to New York, we’d have to dress the street, so Manchester [in England] looked like New York and this could be in Maine, definitely. It’s odd, I’ve flown from New York to the UK to shoot New York but it also makes sense.”

The actor returns to Das Boot to reprise his role as Samuel Greenwood, who in season one is picked up by Captain Klaus Hoffmann and his U-612 crew as part of a top-secret mission. Later, we see the lawyer back in New York, where he is sought out by Hoffmann (Rick Okon), who now finds himself stranded in the US.

Kartheiser had seen Wolfgang Petersen’s iconic 1981 film, upon which the series is based, when he was in his 20s, describing it as “not an easy watch.” Then, in preparation for the role, he leaned on a book of New York Times clippings from the Second World War, as he considered his character would have learned about the conflict from news reports. “I learned very little about how submarines worked, but you know, how much does that inform my character? Very little,” he admits.

“Ultimately in films, characters, for me, are about the interpersonal relationships. What is my feeling towards these people right now? What happened with them earlier and what do I hope to get from them? So that’s what I focused on. I showed up to set and I spent two days watching these very stoic, serious German soldiers and I thought, ‘I’m [Samuel’s] just going to land like a grenade and I’m just going to chew them all up.’

“The first day we were on set, they just didn’t know what to think of it! I really liked doing that. It was like walking into a fine English afternoon tea and taking your shirt off and screaming at the top of your lungs and I felt my tonal change on the project.”

In season two – which premiered on Sky Deutschland last month – Kartheiser says Samuel is less explosive this time around, though he must go someway to remove his “slimy, shifty and secretive” attitude from season one. Now back in New York, the war seems a long way away.

“When Hoffmann comes to New York, he has no-one but me, so I’m actively saving his life by sheltering him. But it’s complicated because sometimes you’re in bed with someone but how much do you trust them? He’s a hard person to get to open up and I’m the opposite; Sam just throws a million things at you. It’s a very complicated relationship.

“Hoffmann is coming from a world where all his friends are dying, all the older men around him are dead and now he’s in a town where people are worried about their love lives and about their careers and their art and are engaged in laughter and in clubs and drinking and having fun without a care in the world. There’s this guilt that you’re able to have this life while people back in your home country are suffering. He can escape it all, it’s a way out for him, so there’s a lot of built-in conflict within him.”

Kartheiser is best known to audiences around the world as ambitious advertising executive Pete Campbell following seven seasons and more than 90 episodes in Matthew Weiner’s awards-laden Mad Men. Since the 1960s-set New York drama ended in 2015, he has appeared in Casual, Genius: Einstein, The Path, The OA and Proven Innocent.

“Mad Men was a unique experience, so in some ways nothing can compare to that,” he says of comparing the show to working in Europe on Das Boot. “The language and the dialogue was like doing Shakespeare – you did not change it, it was not up for discussion. You read it, you interpreted it, and on other projects you change every single piece of dialogue even if they don’t want you to. With this project, there’s a straightforwardness.

“What I like is that they just come right out and say, ‘Could you do this?’ or ‘Will you do that?’ They cut through all the fluff. They’re pragmatic. I don’t need all that flattering, I find it a bit distasteful to be honest with you. When it comes to production values they’re wonderful. The production values were amazing in the first season, the first opening scene it was like a US$30m movie.”

The actor admits he was “delighted” when he heard there would be a season two, with the chance to reunite with a cast and crew he now considers friends. “One of the big X factors for me was that I didn’t know the German actors and I was blown away by them. After just the first couple of days I was like, ‘This is going to be really, really good,’” he says.

“This is better than what’s coming out of America right now when it comes to young talent. It was really eye-opening. So I was very thrilled that I got to come back for a second season.”

Having now worked outside the US, is he also planning to move into writing or directing? He would, he says, “but I’m not so vain as to think everyone else would want to read it,” he jokes.

“Mostly it’s just me rewriting and rewriting and then I put it away for a year-and-a-half and then read it and go, ‘This is just rubbish.’ It goes on and on. It’s funny, I’ve actually been teaching a bit of acting and it’s an interesting thing to teach because it’s such an ethereal craft, there’s nothing substantial about it really. So it’s interesting to teach it because you’re not aware how much you know about it.

“It’s been eye-opening for me and it has led me to believe that maybe somewhere down the line I want to try my hand at a larger role in the whole scope of a project. It’s intimidating but you need those things because that’s what’s life’s about – growing, learning, failing and trying.”