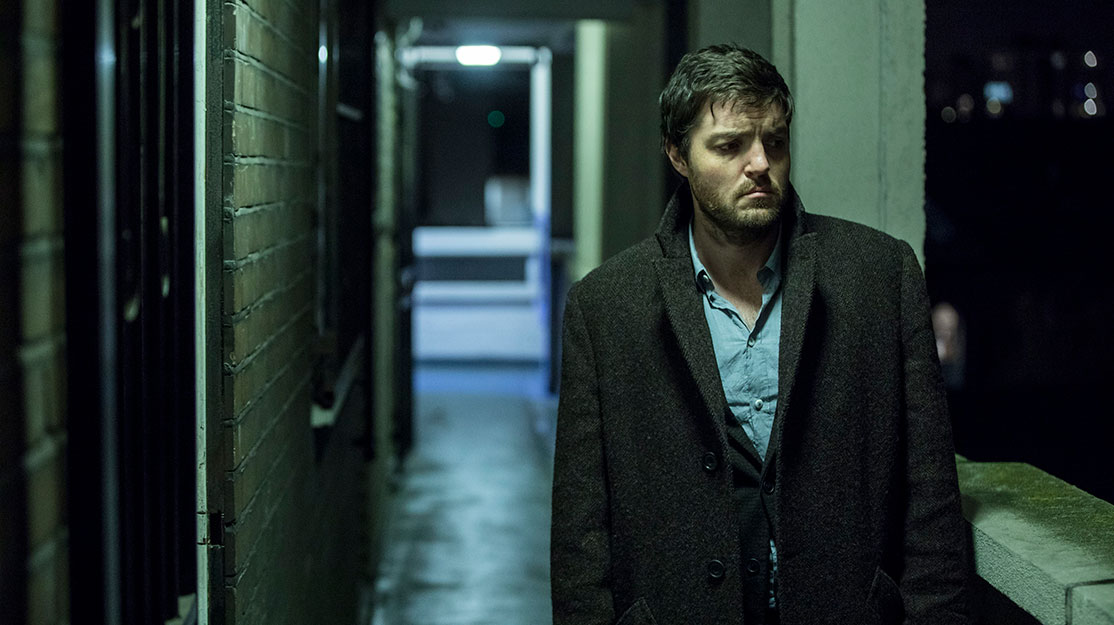 When it comes to iconic television fashion, there are few better examples than Sherlock’s deerstalker hat and the knitted jumpers donned by The Killing’s Sarah Lund, while every incarnation of the Time Lord in Doctor Who has their own unique and memorable style.

Next to join TV drama’s sartorial wall of fame could well be Cormoran Strike’s thick grey woollen coat, which is likely to become the must-have garment this winter following the launch of Strike, BBC1’s adaptations of the three crime novels written by Harry Potter creator JK Rowling, famously published under the guise of her pen name Robert Galbraith.

The Cuckoo’s Calling, a three-part miniseries that launched in UK last Sunday, introduces private detective Strike, a war veteran with both physical and psychological wounds. When a young model falls to her death from a Mayfair balcony, her brother asks Strike to investigate, unconvinced that she took her own life.

Two-parter The Silkworm will follow, with Strike set to explore the death of a novelist who is found brutally murdered, apparently to silence him from publishing a tell-all book about everyone he knows.

Then later this year comes Career of Evil, a grittier, darker two-parter that opens when a woman’s severed leg is delivered to Strike’s assistant, Robin Ellacott. With the police investigating a suspect who Strike is sure is not the perpetrator, he and Robin take matters into their own hands as more horrendous acts occur.

When DQ visits the set of The Silkworm in March this year, Strike and Robin are inside their shared office as the former returns from a gruesome crime scene. A packet of Yorkshire Tea can be found in the kitchen area, while a map and notes are pinned up on one wall. There are business cards scattered about, an old filing system in another corner and an ashtray filled with cigarette ends on a table.

Two cameras are rolling, one focused on Holliday Grainger sitting behind a desk as Robin, when Tom Burke’s Strike comes in, wearing that soon-to-be iconic grey coat. There are plants on the nearby windowsill, while a desk lamp is on next to the computer. The scene is repeated several times and, after a short break, filming resumes with new angles and a tighter focus on the stars’ faces.

The office set, with an authentic backdrop of London’s Denmark Street lit up outside the windows, is the only one that is shared across all three adaptations, while the production took great effort to film on location – and in the exact places Rowling describes in the novels.

It’s also that sense of place that helps to give each story its own identity, with producer Jackie Larkin explaining that each story is set in a different world.

“The first one is the fashion world – Mayfair and Chelsea,” she says. “The second is about the publishing and literary world. That’s a lot around west London. For book three, we did manage to have a very interesting chase sequence all over Soho one Sunday evening, locking off Frith Street and Old Compton Road.

“The shoot has been 80% location, 20% studio. It’s been great – we have had very good access. In book three, some of that happens up north so we really felt we had to go to Barrow-in-Furness. And the third book is a road movie; it’s very much about trying to find who delivered the severed leg. So that brought us to Catford, to Bow, to Whitechapel.”

Another key landmark is The Tottenham pub, a staple of London’s bustling Oxford Street but recently renamed after a change of ownership. That meant finding another location for Strike’s preferred watering hole, in this case The Duke of York in nearby Fitzrovia, and redressing it as The Tottenham. “It’s a small, intimate pub. It feels exactly like the place Strike would be. It feels like The Tottenham in the book,” Larkin says.

Sold globally by Warner Bros International Television Distribution, Strike is produced by Rowling’s Brontë Film & Television in coproduction with HBO-owned cablenet Cinemax, and the author, who is an executive producer, has been extremely involved in the development of the series and can often be found on set during key scenes.

“She’s actually amazing,” Larkin enthuses about the author. “She comes to our read-throughs and feeds into the script. She’s so supportive of the writers and her notes are so insightful for all of us. She has the most amazing notes on character – it’s wonderful for us because she’s created them and we want to get them right.”

That’s not to say the scriptwriters – Ben Richards on The Cuckoo’s Calling and The Silkworm and Tom Edge for Career of Evil – haven’t made some departures from the stories Rowling first put on the page. “There are times when, simply because of the sheer volume of the books, to get it into two hours you have to make some trims or simplify some plot stuff. But I don’t think you would ever look at it and say, ‘I don’t recognise the book in this,’” Larkin says. “The books are such great source material that you want to try and fit as much of them into that two or three hours as you can.”

When Strike and Robin first meet in The Cuckoo’s Calling, there’s an awkwardness in the air. He’s forgotten he’d hired a temp, while she arrives at the worst possible moment. But very quickly she makes herself indispensable – and the pair become inseparable by the end of the first story.

“They’re the heart and soul of the show, such wonderful, intelligent actors,” Larkin says of Burke and Grainger, who also won the approval of Rowling. “Tom was cast before I came on board and he fits the character so well. Then we cast Holliday a couple of weeks later. She is Robin. Ruth [Kenley-Letts], our executive producer, had an idea of who would play Strike and her instinct was absolutely right. The broadcasters loved him. And we didn’t see many people for Robin.”

War & Peace star Burke says that while reading the books, he was struck by how Strike is always eating, putting this down to the character being a fragile man looking for comfort in curries and beer. That need for comfort also comes through in his clothing, particularly his ever-present coat, which also reflects the fact Strike is constantly on the move through the three stories.

Being hidden beneath the large coat gave Burke extra time to bulk up for the role, with the actor taking up weightlifting and increasing his food intake. “I wanted to look like somebody who did drink pints regularly,” he jokes.

Besides his look, Burke had to perfect Strike’s voice, settling on a London accent with some added Cornish notes in a nod to where the character grew up. “That’s how most people sound nowadays – a lot of people just sound London and then you hear a tiny little thing [that hints at their background],” he says. “He has moved all around. It wouldn’t have been right to make him properly Cornish or properly London.”

Then there’s the prosthetic leg Strike was fitted with after losing half his right leg in a bomb explosion, which led to him being discharged from the army. “I was not stressing about it initially but I did think, ‘I need to get that right,’” Burke says of perfecting Strike’s walking pattern. “I spent a good day with this chap who was also military and has the same thing. Sometimes I just put on the sock they use on the stump, this rubbery kind of thing, and the tightness of it slightly slows your knee. That’s what you see [in Strike’s walk].”

In contrast, Grainger (The Borgias) didn’t have to look far for her inspiration to play Robin. “It’s funny, I have heard someone say there’s a lot of Jo [Rowling] in Robin – and when I read the book, I thought she was just like me, and every woman I speak to thinks Robin’s just like her,” the actor says. “I think that’s the great thing about Robin – she’s got all the likeable qualities you want to have. She’s compassionate, brave, practical, intelligent. Nice girl! I was a massive Harry Potter geek but I’d never read them until I got the part. Then I read them all in a week.

“It’s an interesting journey, as Robin’s just a layman when she starts and so she’s learning on the job, but there’s not a sense that Strike patronises her. There’s mutual respect. It’s not the usual competition you get because it’s a different balance from most detective dramas.”

While Strike and Robin share a close working partnership, there’s also a deeper connection that threatens to spill over into romance – though the actors decline to reveal whether viewers will see them hook up on screen.

“In a lot of shows like this, there’s an ‘are they/aren’t they’ thing, and I just think they are,” Burke admits. “There’s something there from the beginning and it’s a permanent blur in their periphery. It’s not like Mulder and Scully [in The X-Files], where you think they’re not but then maybe they are. It’s always there. I don’t know [whether they will]. You surrender to whatever she’s [Rowling] going to do.”

The show’s stars also share a lot of trust on the set of Strike, something they say is down to the fact they have lifted the characters they play directly from the page. “Tom feels like he’s on the same page as Jo on Strike and I feel like I was with Robin and, therefore, you are with each other because I know my idea of Strike is his idea of Strike,” Grainger explains. “When you trust you’re both thinking along the same lines, it makes decisions on set very easy. There isn’t really one to be made most of the time.”

Whether Strike and Robin do finally get together will be down to Rowling, who is currently working on the fourth book in the series, Lethal White. Until then, Burke and Grainger are left to contemplate viewers’ reactions to a show that Rowling fans will have been looking forward to with as much anticipation as a new Harry Potter novel.