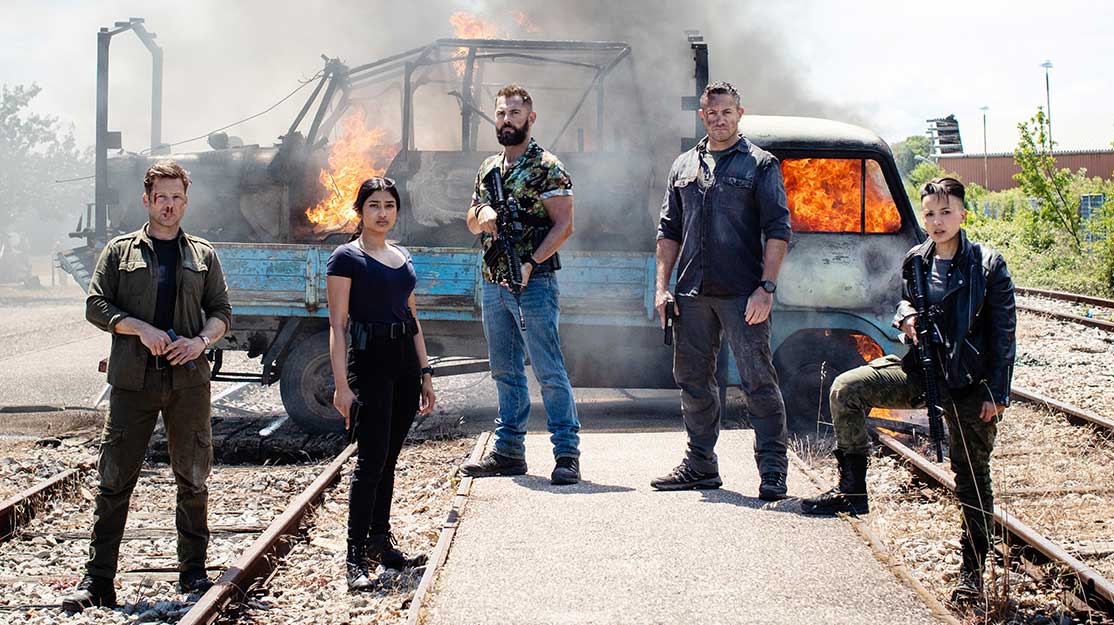 It survived one cancellation, but now the end really is nigh for Strike Back as the action thriller returns for its final mission. Showrunner Jack Lothian tells DQ how he hopes to keep viewers’ pulses racing up until its conclusion.

When it was first commissioned in 2009, Strike Back was hailed as a “truly uncompromising, compelling action drama.”

At that time, commissioning broadcaster Sky was best known as a home for US drama in the UK, airing shows such as 24 and Lost. But Strike Back marked the start of an ambitious new emphasis on homegrown scripted series that was fuelled by other shows including Mad Dogs, The Take and Thorne.

Originally based on Chris Ryan’s novel of the same name, it follows the missions of Section 20, an elite, multinational, covert special ops team that travels around the globe fighting a vast web of interconnected criminal and terrorist activity.

Now, over a decade later, Strike Back is returning for an eighth and final season – a run that, barring its short-lived cancellation in 2015 after season five’s Strike Back: Legacy and its swift resurrection the following year, has seen the explosive series become a mainstay in the Sky1 schedule.

The series has also aired in the US on HBO-owned Cinemax, which came on board as a coproducer for its first original series in the second season, Strike Back: Project Dawn, and later aired the first season as a prequel called Strike Back: Origins.

While a cancellation doesn’t always mean a show is dead and buried in today’s television landscape, with plenty of canned shows finding their way back to the schedules, this eighth season, subtitled Vendetta, will see Section 20 reunite for one final mission – which promises to be their most dangerous yet.

The kidnapping of a British scientist leads Section 20 into a conspiracy involving the development of a biochemical weapon, taking them to the world of the Albanian mafia in the Balkans, the colourful parades of Venice and on to Tel Aviv. They battle street gangs and corrupt property developers and also face enemies past and present. And when a terror attack rocks a European city, the team realise there are even darker forces at work.

Showrunner Jack Lothian could be forgiven for feeling a sense of déjà vu, having been a writer on Legacy when Strike Back was first cancelled. Now, with a second chance to conclude the series, he says he was able to take some gambles with the plot and the characters that might not have happened if it were set to return.

“I suppose the gold standard for TV is Blake’s 7, when they killed them all off in the final scene,” he jokes. “That’s always on the table.”

Finding the story for any season of Strike Back is led by its filming location, with Vendetta filmed entirely in Croatia.

“When we work out where we’re going to film, we start to dig into the area and see what sort of places it can double for, what’s the military activity there and what’s the criminal activity,” Lothian explains. “In the same way we filmed in Malaysia last season [Strike Back: Revolution], that informed who the enemy was and what the mission was. We also look ahead to the sort of threats that are just around the corner, in terms of something that would require a black ops unit to go in, rather than just normal military or police.”

Experts are a big part of the development process, advising on the kinds of contemporary topics and global dangers the show wants to address, though Strike Back is never weighed down by characters putting the world to rights.

“We’re not a show that sits around and discusses some of the weighty issues. The plot pretty much happens on the move,” Lothian says of the fast-paced series, which jumps from one action set piece to the next without giving the characters, or the audience, much time to catch their breath.

“There are certain things that are always kept off the table because I feel like we couldn’t do them justice in the way that we’d want to. It often comes down to some sort of rising threat, and as a starting point, the idea of bioterrorism or an unknown out there is quite exciting.”

Character development is explored through the prism of the often-unique circumstances in which the members of Section 20 find themselves. But just as Jack Bauer experiences in US thriller 24, the clock is always ticking.

Coming up with enough story to fill 10 hours of airtime is “definitely the hardest thing, because it chews through story like nothing else,” Lothian admits. “On a different show, the entire first episode [of this season] could have been three or four episodes. When the show came back [after Legacy, with season six’s Retribution], I really wanted to have this compression of action where you just try not to stop. Hopefully, by the end of it, the audience is exhausted in the best way possible.

“Because we are an action show – and it’s a unique thing to be able to do on TV, to be able to go full speed and try to keep it going – that’s very much the philosophy of the show, just to see how much we can we can squeeze into each episode.”

That approach to storytelling means Strike Back stands apart from anything else on television, with Lothian inspired by his love of 1980s action movies. “There are some military and action shows out there but, certainly with our budget and the timescale we have to shoot, we make things hard for ourselves in terms of all the things we try to do,” he says.

“But it does make the show unique. Before I even joined the show, the thing I loved about it was it felt like nothing else. It’s unashamedly in love with action and everything that comes with that.”

The scripts are written with the locations in mind, before stunt and military advisors suggest how particular scenes might be filmed, or offer alternatives if they’re a leap too far even for Strike Back. One idea featuring a van loaded with chemical weapons was vetoed because “it just isn’t feasible,” Lothian recalls, highlighting the show’s attempts to always keep one foot in reality.

“We certainly try to keep some sort of basis that what happens is mostly plausible, in the same way something like what Bad Boys does is plausible. Whether it would happen is another thing,” Lothian says.

“These soldiers are meant to be the best of the best, but drama happens when something goes wrong so it’s always tricky to put them in situations where something goes wrong and it’s not because they’re being bad soldiers. That’s always an obstacle you have to face. How do things go wrong without then seeming incompetent?”

As the showrunner, Lothian writes for all the episodes based on storylines he has created with other writers and producers from Left Bank Pictures. He also works with costumes – “I had a thing against hats for a while but the costume designer convinced me to loosen up” – locations and the art department. “We’re lucky to have a great crew and everyone’s really top-notch in what they do, so it’s just about making sure we’re all pulling in the same direction,” he adds.

Shooting each season takes up to six months, with five weeks allocated for each two-episode block. A second unit is often in operation, meaning the crew will be filming two things at once in the same location in an attempt to get through all the material.

Croatia offered a variety of locations to the crew, from urban and rural areas to the coast, as well as the prerequisite number of disused factories and warehouses for backdrops to the numerous firefights that take place in each episode.

“What I’m always surprised about is, wherever we go, there are so many disused factories and warehouses that we can blow up,” Lothian says. “I must have seen hundreds now. It was a running joke that, in the final episode, they’re finally going to meet the person whose warehouses they’ve been blowing up. All he wants is for them to stop blowing up his warehouses.”

Another challenge in writing the series is plot escalation – if you start with the search for a bio weapon, where will the story be by episode 10? But this final season takes a different tack, finding time for some quieter moments between the stunts and explosions. “The mid-season episodes are quite interesting and quite unlike anything Strike Back has done before, where we do take our foot off the pedal and go off in different directions. That was a lot of fun to do,” Lothian says.

The writer, whose other credits include Doc Martin and Shameless, says one thing he has learned on Strike Back is that your heroes are always defined by your villains. “We’ve been lucky over the years, with [actors] Michelle Yeoh and last year with Alec Newman, and we have been lucky to have some really good, strong villains,” he says. “Something I’m proud of is that we have three-dimensional villains who you can almost root for. One of the joys of the show is being able to do that.”

Having started working on the show with Strike Back: Legacy, how does Lothian see the drama’s own legacy as it comes to an end? “Before I joined the show, I didn’t realise how smart and funny it was. I had this preconceived notion of it, and I think a lot of people still do. Last season, we did a continuous one-take sequence in a shanty town where the team were under attack so technically and, story-wise, it was a real challenge and something we were all really proud of. It’s a hidden gem.

“One thing people always say when they tune in for the first time is, ‘I didn’t realise the show was like that.’ It is a fun action show, but it’s got a bit of heart and it’s got some drama.”

As for its future, “as Sean Connery might say, never say never again,” Lothian concludes. “Whether I’ll be involved or not, I don’t know. But the idea of the British and Americans working together, it’s a solid buddy-movie franchise so I like to think it’ll come back someday.”