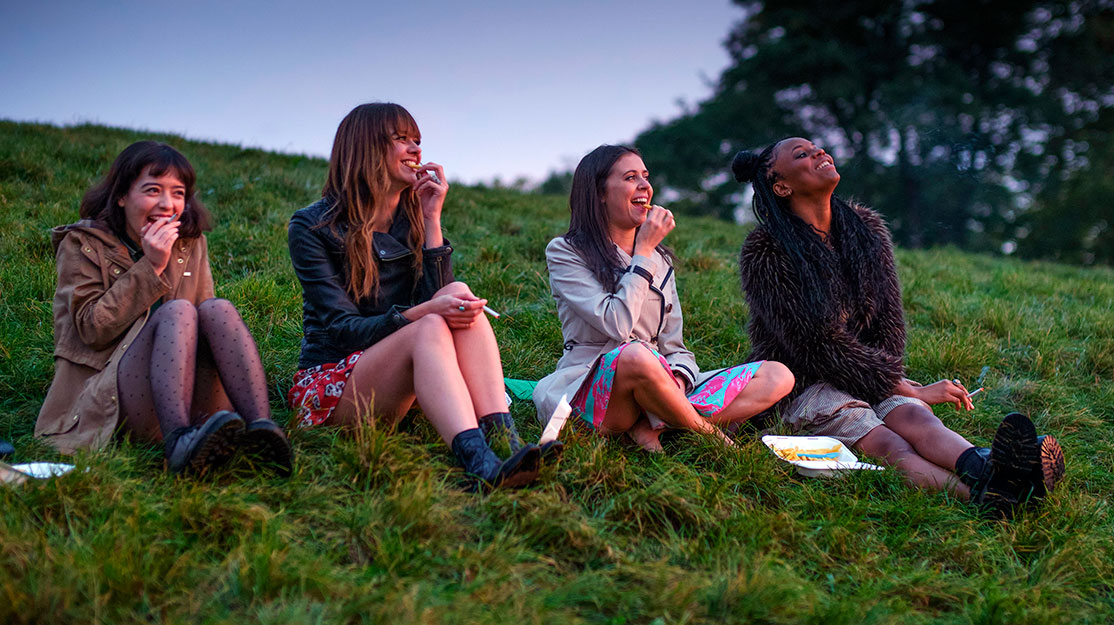 Dolly Alderton, whose career has taken her from columnist, agony aunt and podcaster to author and now television showrunner, tells DQ about adapting her own memoir, Everything I Know About Love, into a BBC drama.

Everything I Know About Love, a seven-part BBC drama written by Dolly Alderton, is a seductive, nostalgic throwback to living, loving and surviving life in your twenties, from first loves and wild nights out to house shares and climbing the career ladder.

It’s also the funny, sweet and entirely relatable story of one particular relationship – that between two best friends – and resolves to find out whether platonic love can survive romantic love.

As narrator Maggie reveals: “This is the story of great love, but it’s not the one you think it is.”

Inspired by Alderton’s memoir of the same name about her own twenties, it opens in London in 2012 when childhood besties Maggie (Emma Appleton) and Birdy (Bel Powley) are living together with Nell (Marli Siu) and Amara (Aliyah Odoffin) and find themselves navigating bad dates, heartaches and humiliations, with flashbacks to their noughties adolescence.

Making the series has been Alderton’s “biggest dream come true,” she tells DQ. The writing phase, which took place during the UK’s 2020 winter Covid-19 lockdown, was “just heaven,” as she found an “immense sense of purpose” piecing together the story and bringing together the ensemble cast of characters as she penned a new episode every month.

“Week one, we’d work out what the story beats were,” she explains. “Week two, I’d go away and write it in five days. Week three I’d redraft it and then in week four I’d redraft it again, so I loved that process. I felt incredibly prolific, industrious and useful, to see all these piles of scripts mounting up.”

Pre-production was “really stressful” and one of her least favourite aspects of the entire process, as all those elements and decisions that were pushed back during the writing stage then loomed large

“Suddenly having to cut days or scenes out because of all these logistical things, that’s stressful, but then you start shooting and it’s just bliss and I love that,” she says. “Then there’s the edit, and the first part of it is amazing when you do that first shaping and reordering and then the second go is more reshaping. Then the third or fourth edit is really fun because it feels like being in a hairdresser when your hair’s dry and they’re doing the final little finesses at the front to make it just right.”

Alderton’s writing career has seen her work as a journalist for a number of magazines and newspapers and co-host The High Low podcast. Then, after penning Everything I Know About Love, she published her first novel, Ghosts.

She has also previously worked in television as the story producer of four seasons of reality series Made in Chelsea and as a script assistant on the final seasons of Fresh Meat and Peep Show.

When it came to writing her first book, Alderton was keep to continue in the vein of the personal essays she had been penning as a journalist. She also wrote a blog when she was younger about her life growing up. But when she was told that approach was more of an American tradition, she found a way to interlink them with an overarching story.

“So by accident, hey presto, you’re 28 years old and you’re writing a memoir. That was never what I set out to do,” she admits. “But that was just the most digestible and sellable format, and I’m so glad I did.”

Alderton also never thought Everything I Know About Love would be adapted for television, and says she was surprised when production companies showed interest in buying the rights. “But the reason why I think it lends itself to the screen, even though we had to fictionalise it a lot to give it proper structure and momentum, is it is about a central relationship and it is about a protagonist making mistakes, learning lessons and going through changes,” she says. “That’s just a very interesting time to find a character.”

The writer compares Maggie and Birdy’s relationship to those featured in a classic romantic comedies, where the people who are made for each other are always those that initially seem ill-suited. These are characters who have grown up together, who are the most important people in each other’s lives and have almost built their identity in opposition to each other. While Maggie is wild and free, Birdy is contained and controlled.

“Then one of them, Birdy, falls in love for the first time and she no longer needs Maggie to be the thing that props up who she is, because she’s got the love and the gaze of this new person who is also making her discover all these other things about herself that Maggie never really had to discover,” Alderton says. “It’s a relationship in crisis, and that’s the point we find them, that’s the drama that we follow. What will happen to them? Can their platonic love survive romantic love?”

The BBC announced it had commissioned an adaptation from producer Working Title Television (We Are Lady Parts) in May last year when it unveiled a slate of six new series from “some of the country’s most exciting talent,” including Cash Carraway, Theresa Ikoko, Candice-Carty Williams, Stefan Golaszewski, Shane Meadows and Alderton.

When she first heard the series had the green light, Alderton took the day off work and constructed a playlist of all the music she listened to in the noughties. She then returned to her home town of Stanmore, in north-west London, and walked to nearby Bushey, in Hertfordshire, where she went to school and spent a whole day “just wandering around.”

From the start, Alderton knew she wanted to write the series herself. But when she began developing the show, which is semi-fictionalised and inspired by the book rather than based on it, she found she wanted more voices in the room to help her establish the fictional world of the series.

A one-week writers’ room was then convened with Monica Heisey, Alissa Anne Jeun Yi, Demi Nandhra, Yemi Oyefuwa, Honey Ross and Cherish Shirley. Shirley then co-wrote one episode and became a story consultant across the series.

“Other than that, I wrote it myself – but what I now realise about making TV is there are so many creative voices and so many people helping you make decisions that I don’t know if true auteurism can exist in TV,” says the writer, who describes herself as the series showrunner. “You’ve got all these other amazing people and ideas being crowded in, which is brilliant. It’s so important to hire the people whose vision that you trust, who are experts in their field, and then I really believe the most important thing as a showrunner you can do is empower those heads of department. That’s what hiring is. It’s like saying, ‘I trust you, I trust this vision.’”

Each episode is built around points of reality or moments from the book that were important to Alderton. But she says the writers’ room was key to opening up the world of the story in her mind and imagining the numerous other characters and details she could bring into it.

“The last thing I did before I made this was write a novel, and make-believe’s really fun,” she says. “It’s a much easier place to be than trying to cobble together stories from reality. We then went about it the way you would go about any story, working out how you make this the most dramatic, the most interesting, the most real, the most funny, the most charming story we can.”

As the showrunner, she also took huge interest in every aspect of the show, from discussions with director China Moo-Young (Intergalactic, Harlots) about her ideas for the visual look of the series, to hanging out in the costume department. “I loved seeing what the plans were for the girls’ hair, because when you’re 24, there’s nothing in the world that’s more important than your hair.”

But what she learned about showrunning is it’s not about having the final decision. Instead, “it’s about having an instinct for the direction of travel, knowing where you want to end up and helping people understand that,” she says. “It’s about being very clear with the creative people you trust saying, ‘This is what the vision is, this is what the aim is,’ and that’s non-negotiable. Then what is negotiable for the rest of the whole journey is how you get there and how you do it. That’s entirely collaborative and that’s not the showrunner’s job at all. The showrunner’s job is to invite in discussion and empower those people to make those decisions.”

During the series, which is filmed in Manchester and London, the story flashes back to the girls’ childhood – an idea suggested by the BBC when Alderton first went to meet the broadcaster’s commissioning team. Her first script didn’t contain younger versions of Maggie and Birdy, but she says making that change is “one of the greatest decisions we made on the show.” While writing the series, which is distributed by NBCUniversal Global Distribution, she also kept in mind When Harry Met Sally and how the 1989 film is able to keep audiences invested in the central relationship over a long time period.

“The biggest emotional investment we are demanding from the audience and that we have to work really hard to get is about this relationship between these two women who grew up together,” the writer explains. “If we were meeting a couple and we were just told, ‘Oh, they’ve got a history,’ we’re more predisposed culturally and societally to care because we think that heterosexual relationships and getting married and having children is the most urgent and important thing in the world. We are not predisposed to think that about women’s relationships with each other, which means to really persuade the audience that this is a fucking important relationship, flashback was really important.”

Everything I Know About Love, which launches today on BBC One and BBC iPlayer, marks Alderton’s first writing project for television, and if there was anything she wished she had known before she started, it would have been to keep her scenes short.

“I was always holding on to long scenes in the process,” she says. “I don’t know why that is. I think maybe I haven’t been in the production process before and when you watch a great scene, it’s really impactful. It can feel like you’ve been watching it for 10 minutes, just two people hanging out, but it’s more often than not less than a minute.”

Perhaps because of her journalistic style and novel writing, she says: “It’s taken me a while to let go of this idea of longform, thinking that a really masterful scene is when two people are saying brilliant things to each other over the course of 10 pages, and if you can sustain the attention of the audience for that long then it means you’re a really incredibly writer and you’ve triumphed. I now realise that is not the test of a good writer – and it’s certainly not the test of a good scene. Now I’m much more aware of keeping scenes to three pages and under.”