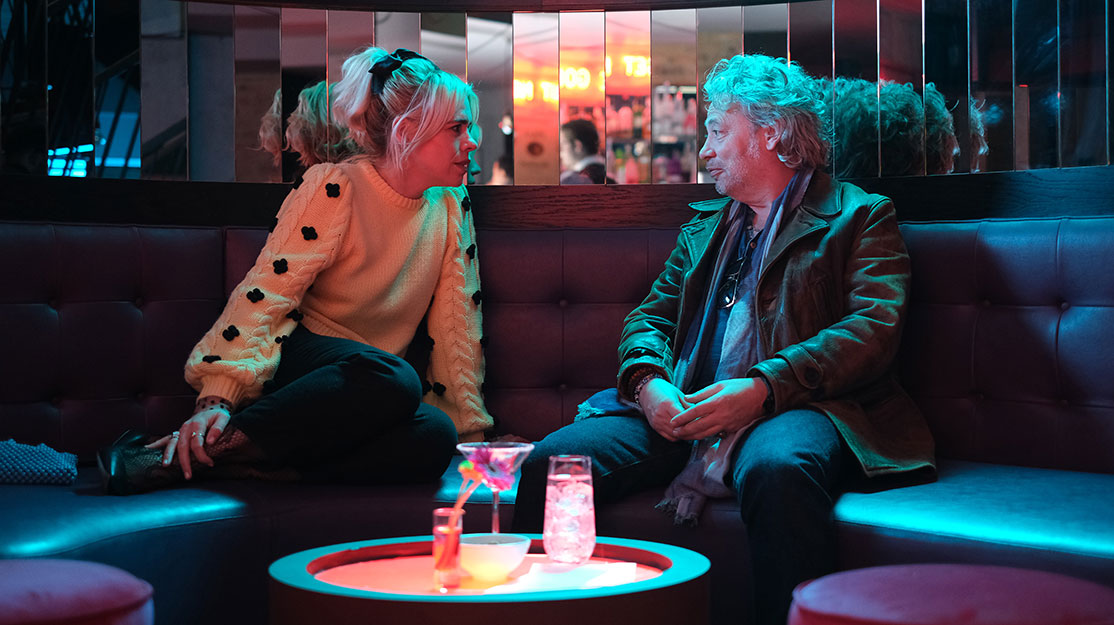 Award-winning British playwright Lucy Prebble made her television debut in 2007 with Secret Diary of a Call Girl, ITV2’s series based on the blog by a London call girl using the pseudonym Belle de Jour. It also marked the start of her partnership – on screen and off – with the show’s lead, Billie Piper, who rose to fame as a teenage pop star before transitioning to acting and appearing in Doctor Who when the show regenerated for a new audience in 2005.

The pair worked together again in 2012, this time on stage at the National Theatre in London’s West End, when Piper starred in Prebble’s play The Effect, about two people who volunteer for a drug trial but throw proceedings off course when they fall in love.

Now, “best friends” Prebble and Piper have reunited once again, this time as the creators of eight-part Sky Atlantic drama I Hate Suzie. Piper plays the titular Suzie, a faded star whose life is upended when pictures of her emerge in an extremely compromising position after a hacking.

Visually and stylistically ambitious from the outset, the series is both intimate character drama and expansive ensemble piece, following Suzie through a different emotional state in each episode – shock, denial, fear, shame, bargaining, guilt, anger and acceptance – as she faces up to her mistakes and leans on manager Naomi (Leila Farzad) to help her hold her life, career and marriage to Cob (Daniel Ings) together.

I Hate Suzie is the result of five years of discussions between Prebble and Piper about their next collaboration, with the pair keen to make the type of drama they would both want to watch – and to do so without compromise.

“That was very appealing because 15 years ago, when we made Call Girl, it just wasn’t the way television worked,” Prebble tells DQ. “You went in as an employee of a production company and tried to make the show they wanted. A lot of good television is made that way but, because there is so much television now, stuff really needs to stand out, so creatives are being offered a little more leeway or creative control.”

The duo developed the show together, with Prebble writing the first episode and a series outline before they shopped it to prospective partners. Bad Wolf, the company behind fantasy series His Dark Materials, eventually came on board to produce, while Sky signed up as the broadcaster. NBCUniversal International Television Distribution sells the series worldwide.

“It was a bit of a risk because, ultimately, you don’t know if anyone is actually going to want it. But we were fortunate that Sky expressed interest, and we then started talking about the rest of the show and I started writing the rest of the episodes,” explains Prebble, who penned all eight episodes.

“It was difficult to find the initial idea. I did quite a lot of rewriting on the first episode. There were at least 30 drafts that were all really quite different from each other until we found what it was. Then the other episodes came much more easily. Two years ago, when it started to get really serious, we were like, ‘Oh gosh, someone’s really going to make this. We better make it good.’”

Although the plot appears to lean on singer-turned-actor Piper’s own life – the show opens with Suzie as a young girl taking part in a TV singing competition before she later appears at a comic book convention to talk about her acting role in a classic sci-fi series – Prebble says it was actually her idea to tell a story about a woman who was famous when she was younger.

“Billie’s one of my best friends. She’s had quite an interesting life,” she says. “We created this show together but, as a writer, I was looking to use things the British public would recognise. Billie’s life is not as exciting as I have written Suzie’s life. None of the things that happen in the show have happened to Billie. But I was talking about what Billie represents in British culture, which I do think is very interesting and specifically British.

“We also talked about people like [pop stars] Charlotte Church, Lily Allen and Britney Spears. It’s like a metaphor for women generally. You reach a certain age and the world starts paying attention to you in quite an aggressive way. Then, at a certain point, the world decides you’re not interesting or worth anything anymore. You’re good for a while and then you’re not so much. It was slightly a metaphor for woman-ness and being in your 30s, which Billie and I both are, and what that does to your life.”

I Hate Suzie also takes its cue from other series that see a well-known star play a heightened or nightmarish version of themselves, but one that is still recognisable in many ways. “Audiences understand what that means,” Prebble says. “They know it’s not literal, they know it’s not true. But they are aware you’re drawing on things in a way to get to a point faster. There’s as much if not more of me in Suzie than there is of Billie. All writing is finding different voices within yourself that you then want to cut everything else away from around.

“Writing is always finding something within yourself that you want to express. You absolutely just get rid of everything else in that moment and just express that one thing. That’s another way of looking at it. It’s an honest way of saying we’re not talking about ourselves literally but we are telling the truth about something emotional and using things you will understand from life.”

The series is directed by Georgi Banks-Davies, who worked with Prebble and Piper to achieve a different look for each episode that plays into the central emotion – and episode title. But in a nod to her theatre background, Prebble also wrote a lot of stage directions into the script to give a sense of how each episode might stand out visually or in terms of Piper’s performance.

“What hopefully works about the show is it’s all tied together with a very strong spine, which is the character of Suzie, but Billie’s performance, particularly,” she says. “She’s playing the same person throughout but it’s much more like eight little films that follow this woman after this thing has happened to her. That was much more exciting for me to write, to be honest, than a traditional slightly more plotted, plodding show.”

Prebble describes her friendship with Piper as “the most important element” of the show, as it meant they were already familiar with each other’s work ethic. “I know what I want; I’m quite controlling as a writer and creator, and Billie knows me as a friend and a person first so she knows all that stuff about me,” she says, revealing that any conflict is easily extinguished by humour. “When she becomes a diva, I’m very quick to point that out. And if I get overly controlling and a bit monstrous, she’s the first person to say, ‘You’re expressing yourself a lot through anger at the moment, Lucy.’ We keep an eye on each other but with a lot of love.”

Years of discussions through their development of the show meant they also had a shorthand when it came to filming the series, with Prebble on set throughout production as showrunner. Piper was also “brilliant” at working on the scripts, Prebble notes. “She’s co-created it, so a lot of the stuff we came up with together. And when she reads it, she’s got an absolute eye for emotional honesty. Whenever there’s a moment she feels like there’s truth being told, she will praise it to the skies; and whenever she spots a moment where there’s something dishonest going on in the writing, she’s there immediately and she’s alway right.

“We just know each other really well. There’s very little that can shock or hurt you when you’re working with a very good friend. I was worried about working together – I thought it could be a nightmare – but I’m amazed at how strong our friendship has been through this and quite touched by that as well.”

As a writer and producer on HBO’s acclaimed drama Succession, Prebble is well versed in how the showrunner role works across the Atlantic, having worked alongside creator Jesse Armstrong for two seasons. They are currently plotting the upcoming third instalment. Translating the showrunner title to British television “is a tricky one,” Prebble says, though UK drama is undoubtedly becoming more writer-led.

“The way I interpret it is I’m in charge of the show as a whole as an executive producer along with the other EPs, but it’s my responsibility to make sure everything makes sense and is achieving its artistic goals,” she says. “That’s everything from the scripts to the choice of directors, the casting, the choice of location and also down to how people are on set and how people are relating to each other and the technical stuff as well as emotional stuff. You’re basically in charge of the show.

“In Britain, everything has traditionally gone through a pure producer model, so this is more of an American thing we’re starting to do. When I started out in television in Britain, the writer would very rarely come to the set. If you did, you were put in a room and brought tea and biscuits. They would get you out when there wasn’t much work going on to show you the set and then you’d be sent home. It was a very strange, in a ‘your job is now done’ sense. That’s not the case anymore.”

Shooting had wrapped before the coronavirus pandemic took hold around the world, forcing countless productions to shut down. But Prebble and the team behind I Hate Suzie still had to navigate post-production remotely, which she says was “very strange, difficult, weird and slow.” Particularly challenging was recording the actors’ ADR (additional dialogue replacement) from their own homes, rather than in a studio.

“We had to send equipment to actors’ houses and ask them, without necessarily being able to see the video properly, to redo a line,” Prebble says. “They’re in their own homes so there might be the sounds of birds singing if they’re in the country, and your scene is inside a restaurant. It’s just an absolute nightmare. As with everybody in every area of life, it really makes you appreciate the things you took for granted. People who work in that industry, they don’t get a lot of credit but actually they should do. Fitting dialogue to an actor’s mouth after you’ve shot something is an incredibly difficult skill to get right and for it not to be noticeable.”

I Hate Suzie, which launches on Sky Atlantic and Now TV tomorrow, will explore how the people around Suzie are also affected by the devastating impact of the hack. But at the heart of the series is the title character, who has spent her life playing different versions of herself and must now piece together her fragmented identity.

“She’s slightly lost sense of who she is, which is quite a dangerous place to be psychologically,” Prebble says. “This terrible thing happens to her and it forces her to look at the truth about herself and bring the shattered parts of herself together. Suzie’s never quite worked out who she is because she’s public property, but now she finally has to discover who she is.”