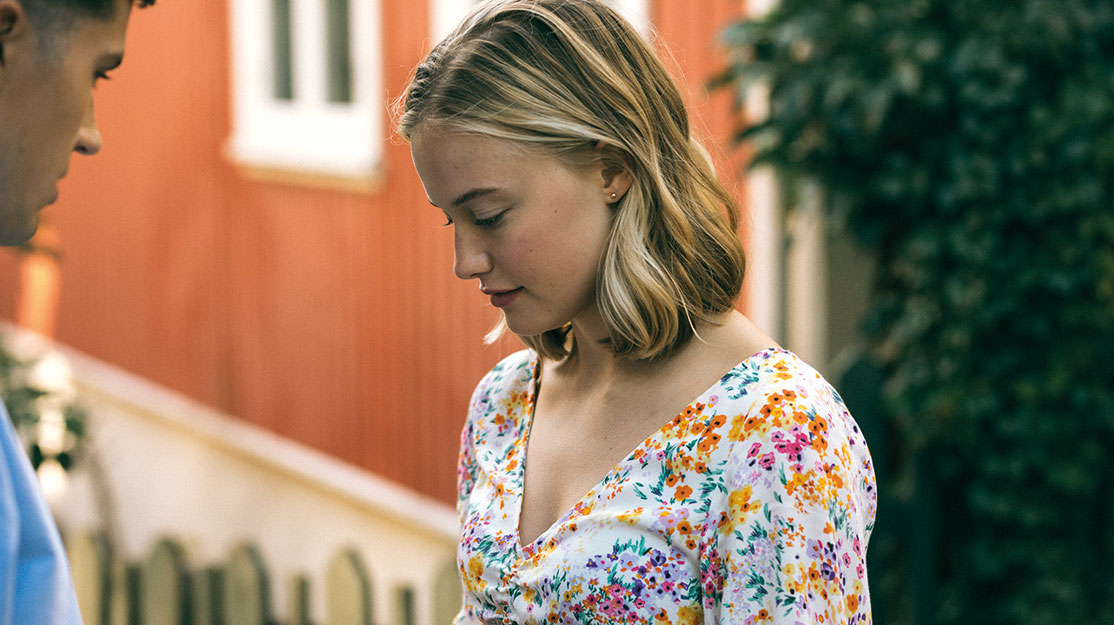 Writer Marie Hafting and producer Kaia Foss reveal their voyage into the world of far-right extremism with Alt du Elsker (Everything You Love), the story of a young couple in love and the secret that threatens to tear them apart.

The journey to making Norwegian drama Alt du Elsker (Everything You Love) began with a single question: why do people turn to extremism and commit horrendous acts of terror? In Norway, it’s a question that came to the fore after a number of terrorist attacks in recent years, most notably in 2011 when Anders Behring Breivik killed 77 people.

But when writer Marie Hafting first discussed the idea with Nora Ibrahim, head of development at The Oslo Company, she decided she didn’t just want to write about extremism. Instead, she wanted to blend that subject with something that was warm, funny and intriguing.

“Then we said, ‘What about a love story?’” Hafting tells DQ. “A guy and a girl fall in love and then she discovers he is a far-right extremist. Because we have this history with terror in Norway, it was very important for us to say something true about extremism and find out how young people get radicalised. But we also wanted to tell a human story, not one just about a crazy guy we all hate.”

The resulting Discovery+ series tells a story of love and radicalisation through the eyes of a young girl in love and a boy on the edge of something much darker. The seven-parter opens when childhood friends Sara and Jonas reunite on the Oslo Metro. Romance soon blossoms between the couple, but what Sara doesn’t know is that Jonas is being radicalised by a far-right extremist group. His search for like-minded people online contrasts with his relationship with Sara, but the longer he tries to lead a double life, the deeper he falls into his new community. Then Sara discovers Jonas’s dark secret.

Development first began two years ago, when Hafting and Ibrahim began sketching out some preliminary ideas and structures for the show. Over the past 12 months, they and fellow producer Kaia Foss have worked intensely on the script to ensure it adequately balances all the subjects at play.

“Part of what we discovered in the way Marie developed the two main characters is that, for Jonas to be a human, we have to see how someone can become radicalised, because no one is born evil and you want to stay with them in that process,” Foss explains. “Wrapping it in a love story emphasises this idea that no one really has it written that they’re extreme. Jonas finds a young girl who is adventurous and free-spirited and slowly realises he has certain world views that are far beyond what’s acceptable. There’s so much drama in that relationship, but we obviously don’t want to give a microphone to the ideology in any way. We had to find a human approach to the whole thing from both characters’ standpoints.”

When viewers first meet Jonas, he’s a young man with concerns about the direction of modern society and the broad ignorance around climate change. “Many young people can relate to many of his thoughts but, at the same time, we will see that he doesn’t get much support for his thoughts in society when they go further,” Hafting says. That’s when Jonas turns to the internet and finds an audience that shares his views. “In a way, some people will find him really far right in the beginning, but it’s getting worse.”

By comparison, Sara is fun, outgoing and full of life, yet she has her own problems. She is isolated by her friends, often lying to make life more comfortable and then suffering the consequences of her ill-thought actions. Across the series, she will have to face up to her own problematic behaviour. Then when she discovers Jonas’ secret, the story becomes one about how you cope with your feelings for someone you love when they become radicalised.

“Once she does find out, we follow both of them when they’re apart, and that’s where they find their feelings for each other are still there,” Foss says. “He’s conflicted about his ideology because he’s met someone who doesn’t necessarily make him change his views but he’s feeling love in a different way from how he has before, and that’s at the core of this drama. It’s complicated because they do love each other, and that makes them question a lot of things about themselves as well.”

“That’s the main thing for Jonas because, if he goes with this ideology, he will lose something very big and important for him, so is it worth it?” Hafting adds. “Where is he getting love and affirmation from – his friends and forums online, or this new love?”

Research was key to the series. Hafting talked with scientists, journalists, police officers and former extremists and their friends and ex-girlfriends. She also spoke with Norwegian intelligence services. But most importantly, she spent time on real online forums where extremists like Jonas meet and talk.

“During Covid, working in my home office and researching all these forums, it was not healthy. But it’s interesting. I had to understand that to write something true about Jonas and how he sees the world.”

For the same reason, Hafting chose to write the series on her own – working with Foss and Ibrahim – instead of utilising a writers room, as she would normally.

“When you go so far into the research, it’s very difficult to put another writer on the project,” she says. “You have to understand how Jonas sees the world to write it. Luckily for me, because I always like to talk to people when I work, Kaia and Nora were very good at reading and offering their own input. Without them, it would have been so much harder.”

One of the biggest practical challenges of the series turned out to be how to portray these extremist forums for viewers watching at home. As Foss admits, “obviously it’s not very interesting to be watching someone’s computer.” Instead, working with Hafting and director Stian Kristiansen, they decided to lift a lot of the action away from the computer so on some occasions, Jonas meets up with some of his online friends to make the series more active for the viewer.

“It’s still a realistic scenario but a little bit more interesting to watch, and fewer hours of online chatting,” Foss continues. “From the production side, the challenges making the series had a lot to do with the casting, not just the leads but all the other characters around them. Sara has a roommate who acts like her moral compass and someone she can vent to, so just finding these people among young acting talent has been really fun and crucial for the story as well.”

Headlining the series are Mina Fuglesteg Dale as Sara and Jakob Fort as Jonas, who won the parts after completing auditions featuring several scenes where they had to portray the various aspects of their characters’ personalities. Most importantly, they both had a special X factor when they were on camera, even if they weren’t acting at all.

“Jakob is a little shy and that’s very nice for the Jonas character,” says Hafting, who was closely involved in casting the central couple. “With an actor who has this quality by themselves, it makes him more authentic in a way. It’s the same for Mina. She had this life and this humour and this world very automatically. That was very important for me in the process.”

Filming took place on location in Oslo over an intense 39-day schedule between August and September last year. Foss describes Everything You Love as a love letter to the Norwegian capital, and the city looks beautiful on screen, full of light and green open spaces. Norwegian singer-songwriter Ary provides an electro-pop soundtrack.

“It’s a one-camera production so we had a pretty small team. This was one of those projects where it was an amazing team effort because you got the sense everyone involved in the show truly believed in it,” Foss says. “I felt everybody just wanted to make this the best it could possibly be, and that was an amazing energy to take into a project. We’re just thankful Marie wrote such a wonderful story everybody wanted to be part of.”

The series launched on Discovery+ in February but, backed by distributor DR Sales, both Foss and Hafting hope international audiences will now be swept up by what at first is a sweet love story peppered by some darker undercurrents lying in wait.

“This is an international problem because these forums are international platforms,” Hafting says. “I hope this series will reach people, because a guy like Jonas may be your neighbour or he may be in your class. Many people know someone similar to Jonas, but how do we deal with that? It’s something many people around the world are concerned about.”

“It’s a universal love story, but this perspective brings it a little closer to home,” Foss adds. “Unfortunately it’s important, without wanting it to seem like a very educational show – it’s not meant to be, it’s supposed to be an entertaining show. When you make something, you always want it to leave some kind of a mark. This is a different angle and I hope people will take it with them to some small extent.”

Furia
From Mammon creator Gjermund Stenberg Eriksen, this eight-part drama examines the threat of far-right extremism with a story that sees a police investigator and an undercover cop work together to crack a nationalistic subculture, leading them to reveal a terrorist plot that stretches from Norway’s mountains to the heart of Europe.

NSU – German History X
Based on a series of real murders and the subsequent criminal trial, this series opens as a clandestine far-right terrorist group guns down immigrants in a series of cold-blooded acts. Though the police initially believe the deaths to be the result of infighting between immigrant communities, links are soon drawn between three suspects and their right-wing influences.

Ridley Road
Also based on real events, this miniseries is inspired by the struggle of the 62 Group, a coalition of Jewish men who took on neo-Nazism in post-war Britain. Vivien (Agnes O’Casey), a hairdresser from a Jewish family, follows her boyfriend from Manchester to London, where she discovers he has infiltrated the National Socialist Movement and decides to join him undercover.

Romper Stomper
Inspired by the 1992 film of the same name starring Russell Crowe, this Australian series blends crime drama and political thriller to explore a new generation of far-right activists, their anti-fascist counterparts and three young Muslims caught up in the conflict.