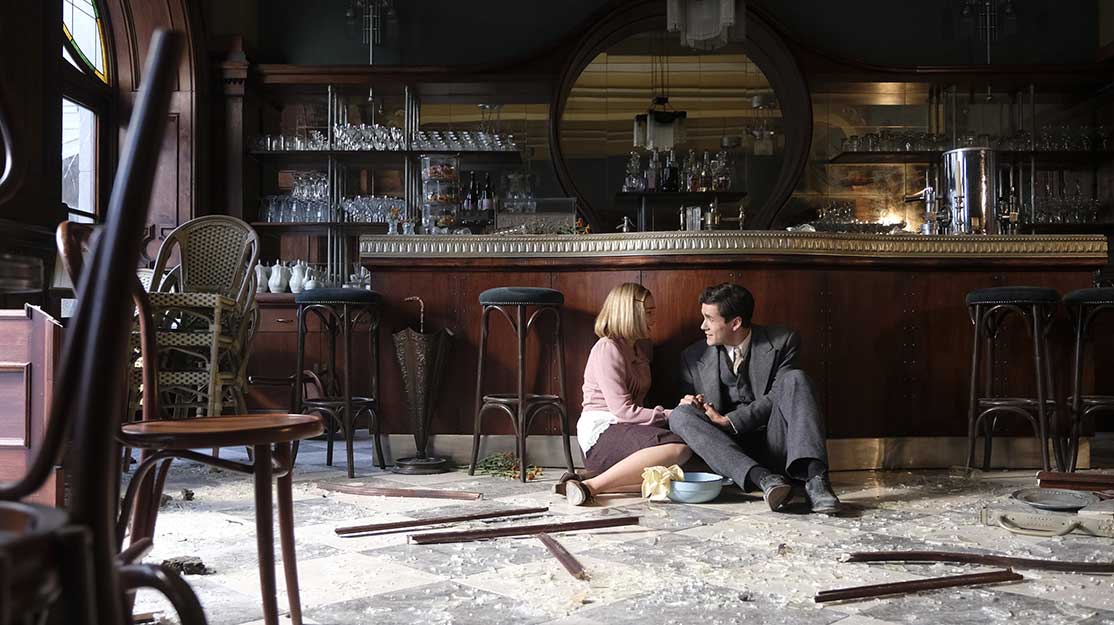 Jonah Hauer-King and Zofia Wichłacz, two of the stars of Peter Bowker’s war drama World on Fire, talk about the tangled relationship between their characters and how the series balances epic action scenes with emotional storylines.

BBC series World on Fire, Peter Bowker’s ambitious attempt to dramatise the Second World War, zooms in on the ordinary people across Europe affected by the conflict.

Central to the story is a love triangle between translator Harry Chase, played by Jonah Hauer-King, who begins episode one declaring his love for factory worker and singer Lois (Julia Brown) in Manchester.

Fast-forward several months to the summer of 1939 and Harry is working at the British Embassy in the Polish capital, Warsaw, where he falls for waitress Kasia (Zofia Wichłacz).

As the Nazi threat spreads across Europe, Kasia must choose between love and fighting for her country, while Harry searches for his place in the world and Lois seizes new opportunities as the war unfolds. Harry’s mother Robina (Lesley Manville) and Lois’s pacifist father Douglas (Sean Bean) also find their lives upturned, while outspoken American journalist Nancy (Helen Hunt) finds herself in mortal danger.

Through these characters and their stories, Bowker’s seven-part, multilingual series puts a human face on the first year of the Second World War, capturing the lives of people across Europe and exploring how they are all connected, from Manchester to Paris, Berlin, Warsaw and the beaches of Dunkirk.

“What’s exciting about the show and what’s challenging is we don’t have a central protagonist. There are a lot of stories here and what’s cool is you’re being shown a world that tells you that a war connects everyone,” Hauer-King tells DQ at the Monte Carlo TV Festival. “You have Poles, people from England and people from Germany and France and they’re all connected. They’re all part of these massive, scary events that are unfolding. So we’re at the heart of it in a way, but you feel part of a sort of strange TV family because you’re telling the story together.”

Viewers first meet Harry and Lois in Manchester, where they interrupt a Blackshirts rally and suffer for their protests. His mother takes a dim view of his relationship with a lowly factory girl, while Robina also chastises Douglas, a man still bearing the scars of his experience in the First World War. Then when Harry reappears in Warsaw several months later on the eve of war, he is in a relationship with Kasia. When the first bombs drop, he offers to marry her in a bid to help her escape to England.

“When we meet him, you become aware that he has a girlfriend, a first love, back home. But pretty quickly, he’s in Poland and we see that he’s gone down the route of falling in love with two people, which is not something I would recommend,” Hauer-King (Little Women) explains. “So he finds himself in this not very good situation. But in terms of him and Kasia, they have a really passionate and strong connection. Sometimes you meet someone that just immediately feels very exciting and very vital. Then the war comes.”

Those first scenes run just long enough to establish the characters before the action begins, windows shattering and roofs collapsing as German planes bomb Warsaw. “It’s just beautiful that we had those few scenes before the war, so we could show the joy and the life of these young people. Because after that, there’s just war,” Wichłacz (Amok) adds.

One of the Polish actor’s first ever acting jobs was in Warsaw 44, a film that chartered love and friendship during an operation led by the Polish underground resistance to liberate the city from occupation. Five years later, she’s starring in a British series that reveals what ordinary Poles experienced during those first days of war.

“I knew this would be something completely different, so I was interested in doing it as well and telling a very interesting story,” she says. “The character, I fell in love with her.”

Similarly, Hauer-King has previously appeared in Ashes in the Snow, a movie about the Soviet occupation of Lithuania. “But when you read a script, often you’re really looking at the character and the journey they’re going on,” he explains. “I would do 10 Second World War movies if they all felt different, complex and unique in their own way. There are infinite stories within wars – and actually, that’s partly the point of this series. It’s trying to say there are different sides, different families, different nationalities and people are affected and changed in all kinds of ways. It’s not told as a binary, good-versus-bad story.”

Wichłacz describes Kasia as “a fighter” who loses everything and then battles to win it all back. “So this kind of journey is really exciting,” she says. “I get to play someone who seeks power that she’s lost before.”

In an ensemble drama without a leading protagonist, does Harry stand out as the hero? Hauer-King believes Bowker doesn’t write heroes, instead filling his dramas with a cast of complicated characters. “And that’s exciting because that’s real life,” he says. “The challenge for me was that Harry, despite putting himself in this difficult position, would be a hero in another series.

“There’s parts of him that relate to that, because he is compassionate, brave and has a lot of warmth in him, but he’s deeply flawed and has a lot to learn. He’s by no means a hero. That was exciting because it felt real and also gives your character somewhere to go. It’s fun looking at the journey and seeing the way a character changes over a period of time. That’s what Pete’s really good at – all of the characters go from one place to another. It’s a good acting challenge.”

The cast spent 10 days together in Prague before shooting began, with the Czech city doubling for some of the major locations portrayed in the series. Lead director Adam Smith would also find room in the schedule for as much rehearsal time as possible.

“TV schedules are crazy but he was very good and respectful that he wanted, even on the day [of filming], to try to have a bit of time to ourselves and with him before the 200 crew come in,” Hauer-King says.

Wichłacz continues: “Every day was different. But I always felt so secure and safe on set because, with each of the directors, I felt a great connection. We had four directors [Smith, Chanya Button, Andy Wilson and Thomas Napper]. Everyone was just amazing – amazing crew, amazing DOPs. And even if you’re shooting scenes with explosions but then the next scene is a very intimate emotional scene, I always felt like we had time or however long I needed to focus or to rehearse. It felt really special.”

Hauer-King says the show – produced by Mammoth Screen and distributed by ITV Studios Global Entertainment – features a  “huge range of storytelling techniques,” from the epic set pieces that present a key moment from the war in each episode to the quieter, personal moments shared between characters, whether in England, Poland, France or Germany.

“That’s fun as an actor because you’re flexing different acting muscles,” he says. “It very much keeps you on your toes because, as we know, there’s often no kind of rhyme or reason to a TV filming schedule. One day you’re running through explosions and the next you’re in bed with someone and it’s a very different scenario.”

The actor describes it as a “genuine privilege” to work alongside such established and esteemed actors as Hunt, Bean and Manville.