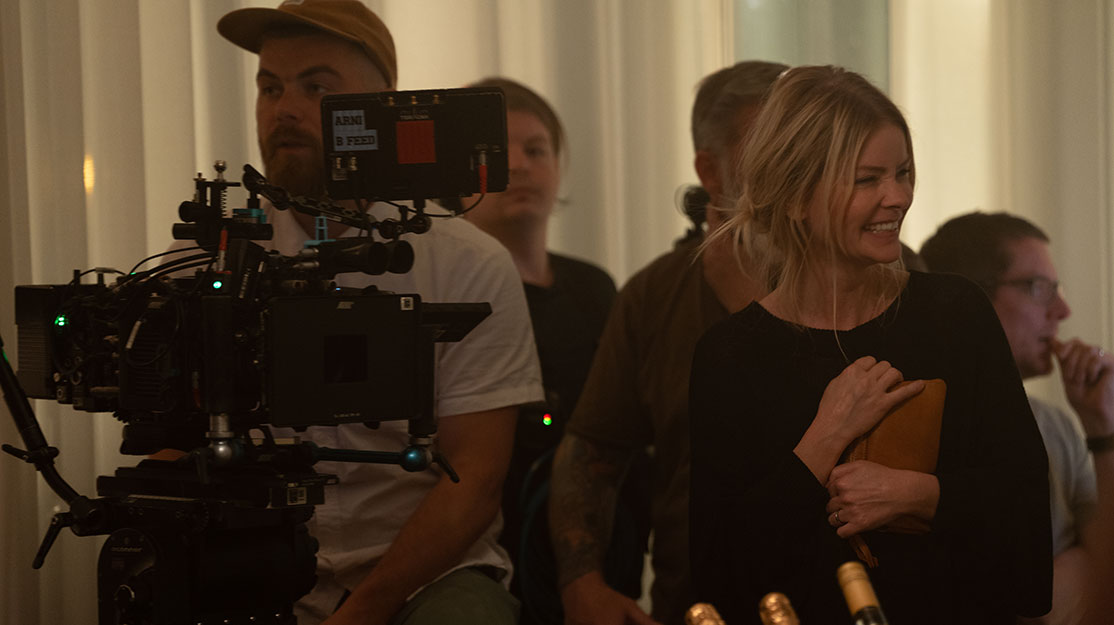 Icelandic star Aníta Briem speaks to DQ about turning creator and writer for relationship drama As Long As We Live, how her own life inspired the series and her experience of increasing representation for women in film and TV.

More than five years ago, Icelandic star Aníta Briem wanted to write a story – one that had been in her thoughts for some time. But when it came to putting pen to paper, she was plagued by self-doubt.

“I didn’t know what it was going to be,” she tells DQ, “but it was always in the back of my mind that surely I couldn’t do it – ‘I can’t write this on my own. I’ll just wait until I find the perfect person to write it for me or with me and do it properly, because I can’t.’”

Then two years ago, she sat down and started structuring her idea as a television series. “And as soon as I did that, it started to come alive.”

Fast-forward to today and Briem is the creator and writer of Svo lengi sem viõ lifum (As Long As We Live), a six-part relationship drama based on her own life and produced by Glassriver (Black Sands) for Iceland’s Channel 2 and Swedish streamer C More.

Briem also stars as Beta, a once-promising musician who now finds herself in a dead-end marriage, lonely and struggling to be the mother she wants to be to her toddler. When their new au pair, a young man, starts to propose ‘flirting assignments’ for Beta and her husband Thomas (Swedish actor Martin Wallström), Beta finds herself on a roller-coaster ride that will make or break her relationship.

“What really pushed me to write this was that I ran into a bit of a war with love in my life,” she says, speaking to DQ at French festival Série Series. “I found there was such an absence of stories that reflected anything I was going through because most stories about love are stories of people who fall hopelessly in love, they run into an obstacle, they overcome that obstacle and then they ride into the sunset – which is great.

“But I found such an absence of stories helping me deal with the things I was dealing with in my life. And because nobody was really telling stories about it, I thought I must be the only person in the world feeling this way. Then I started having conversations with people and it turns out, as soon as you start a conversation with somebody, they’ll say, ‘This almost happened to us and we almost divorced.’”

Briem – familiar to fans of HBO’s The Tudors as Jane Seymour – then started to research the phenomenon of the seven-year itch that many married couples experience, and found further evidence she wasn’t alone.

“When something goes a little awry and it’s not how it’s supposed to be, I found there were very few tools or stories that normalised the things that are happening in our homes every day but people don’t talk about because we don’t want to fail,” she says. “People want their marriage to appear as though they’ve succeeded, me included.”

While working through her own issues, the actor felt an “overwhelming need” to write a story about the feelings and emotions she was experiencing.

“We don’t have perfect lives but, if we talk about it, maybe it doesn’t become so big and it can be something that can be overcome and discussed. That’s a very big hope of mine,” she adds. “I hope people walk away from this and have the courage or inspiration to have conversations inside their homes, with their partners, to question these things. Just because we’re told to believe in this magical fairytale, the ultimate happy marriage, that doesn’t mean that’s necessarily the dream we should all have.”

In As Long As We Live, Beta is a former pop star in a stale marriage and with an 18-month-old to look after, while Thomas is occupied by trying to get a restaurant business off the ground, meaning the couple hardly spend any time together. But the au pair’s arrival leads them to experiment with different flirting assignments in the hope of rediscovering their spark. As the challenges escalate, the couple find themselves facing up to issues they thought they had pushed aside and exposing their greatest vulnerabilities.

“We’re able to tell a story that is a fun ride,” Briem says. “It’s sexy and has a very sensual texture to it. You go inside Beta’s head and you see what she sees, and it’s through this little adventure that they’re able to confront a lot of things, potentially either bringing them together or destroying their lives forever.”

Briem had outlined the first four episodes of the six-part series years earlier, but it was only when the project got the greenlight that she came under pressure to finish the story. Having previously struggled to work out what the show’s third act would be, she found that her own lived experience provided the answer.

“What I realised when I first wrote it was that I wasn’t ready, because episodes five and six are the experience I have soaked in in my life for the past two years. Then I was like, ‘Now I understand, now I’m able to write act three.’”

But As Long As We Live, which is distributed by Eccho Rights, was always meant to be a hopeful story and to leave audiences with a sense of optimism, energy and courage. “That’s the intention,” Briem adds. “Nobody’s riding into sunsets, that’s not the story. But from the very beginning, the reason I went on this journey was not to make a downbeat story. I wanted to find a way into the light.”

Notably, Thomas had initially been written as Icelandic, but Briem took on board the idea that because the couple were philosophically at odds with each other, their differences might be heightened further if they were also culturally different.

“That was interesting to me because it made them all the more obviously different, but it was also interesting to touch on the subject of what it means to be a guest in a country that is not your own and how people experience themselves as outsiders,” Briem notes. “Then we got amazingly lucky with our lead actor, who is fantastic. That’s been a nice process as well because as all the actors have come on board, I’ve been able to massage [the script] into their voice. Everybody brings such a personal experience to this and I love that they all feel so personally connected to the story.”

Looking back on writing the series, “it was hard, writing is hard,” she says. “I found it incredibly hard. But it should be.”

But as an actor who has read “countless scripts” over her career, Briem found that experience gave her a greater understanding of how to write a script of her own, breaking down story and character arcs in a very technical way as well as building up structure and creating nuanced characters.

As she was writing the show, it was always her intention to play Beta herself once production began under the guidance of director Katrín Björgvinsdóttir (Trapped). “There was a brief moment where I thought, ‘Do I want to play this?’ but deep down I always knew,” Briem says. “She’s a bit of an eccentric character, she’s a little different. She’s got little quirks and stuff that are very specific, so I wouldn’t know where to begin to explain her to somebody else to perform it.”

Briem credits a lot of her understanding of screenwriting and film and television theory to her 13-year spell living in LA, where “everybody talks about films all day and night.” It was there that she also saw the dominance of male writers and directors in the industry, with female parts relegated to “the girlfriend, the sexy kitten, the troublemaker, the sweet one – all these various different characters who, from a female perspective, are quite tiresome and quite degrading for longer periods of time as an actress. It’s like a death of a thousand cuts.”

However, she believes things are now changing: “You can really feel it and you can look back on film and TV history and think, ‘Oh god.’ When I was working in LA, you’d be called in for an audition to play ‘the sexy one’ and ‘please wear tight jeans and a push-up bra.’ That was just a normal thing, which is utterly twisted and very hurtful to women.”

Having increasingly worked with female filmmakers since moving back to Iceland, Briem believes it’s “crucial” for there to be equality and equal representation in film and TV, on both sides of the camera, so that content reflects the society it comes from. “Otherwise we always have a marginalised group of people in a corner thinking they don’t belong, or their stories or experiences don’t matter, or they’re alone in the world.”

Despite her move into writing, Briem continues to be a regular on-screen presence. She has recently appeared in films such as drama Quake, period love story Reply to Helga’s Letter and comedy drama Villibrad, about seven friends at a dinner party who agree to publicly share any phone calls or messages they get during the night. Recent TV roles, meanwhile, include political drama The Minister.

Writing As Long As We Live has been a “really rewarding experience, although it’s been incredibly hard,” she says. “Right now I feel like I’ve just emptied the contents of my body on the table and I can’t fathom whether I could squeeze out more, but I think that’s also the way it’s supposed to be.

“For this story, it’s a personal story, meaning it’s based on a deep conflict I had inside myself, but a lot of the story is fabrication. What drives you to tell a story in most cases is going to be personal, and I’ve been living in the state of Beta for an extended period of time.”