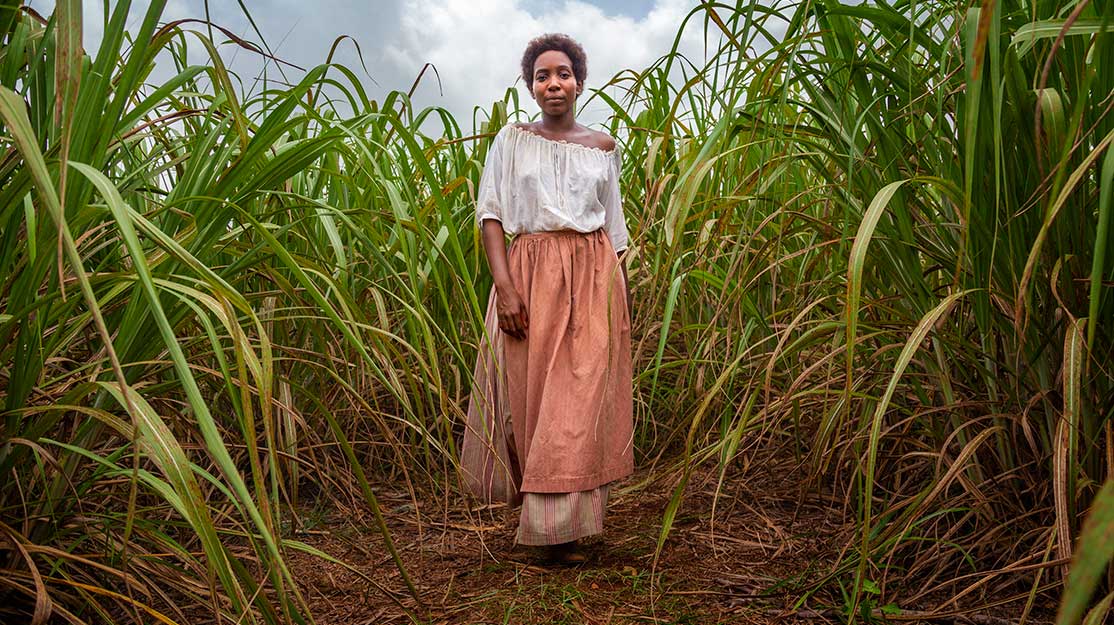 The Long Song, based on Andrea Levy’s award-winning novel, brings a untold period of British history to the small screen. Screenwriter Sarah Williams and director Mahalia Belo reflect on the story’s contemporary relevance and how the series blends tragedy and humour within a distorted narrative.

There’s something quite different about The Long Song – this isn’t your typical historical drama. In the opening seconds of episode one, the narrator explains as much, disrupting this story of a “crafty girl” working as a lady’s maid during the final days of the slave trade in 19th century Jamaica, under a false name.

Before the story has a chance to settle, the narrator sends us back to “the beginning,” with the camera panning across vast swathes of cane fields where black slaves are working tirelessly under the threat of their white master’s whip.

It’s a sign of how the three-part BBC1 drama, based on Andrea Levy’s award-winning novel, will play out in the hands of screenwriter Sarah Williams and director Mahalia Belo, with all the drama and humour of the source material blending with dynamic camera movements, dual timelines and the vivid backdrop of the Dominican Republic, where the miniseries was filmed.

The plot follows a strong-willed young slave called July (played by Tamara Lawrance) who lives on a plantation owned by her odious mistress Caroline Mortimer (Hayley Atwell). When a charming new arrival to the island, Robert Goodwin (Jack Lowden), becomes the new overseer, July and Caroline are intrigued by his seemingly revolutionary determination to improve the plantation for the slaves and mistress alike.

It’s a story that has huge contemporary relevance for writer Williams, who says it highlights a period of British history that has been “glossed over.”

“When we think of slaves, we normally think of American slaves, or slaves in America and only think of the abolition of slavery, in which Britain led the world,” she says. “Just giving those people a voice and taking us to that dark corner of British history, you find it’s very complicated. It’s not so straightforward. I think there’s a good deal to be learned from the story as the same time as it’s really entertaining and packing a punch.”

It was producer Heyday Television that approached Williams about adapting The Long Song, with the writer having previously adapted Levy’s novel Small Islands for the BBC in 2009. The pair forged a “really good creative relationship,” with Levy offering notes at every draft stage. “I see my job as bringing her vision to the screen,” the screenwriter explains. “The dialogue we have is crucial.”

That has particularly been the case on this project, owing to the fact The Long Song is an “epic” book that has thrown up lots of questions over how to trim the story to just three hours of screen time and where the adaptation’s focus should lie.

Williams notes that Levy writes “very dramatic and funny things that, in their entirety almost, you can lift and put on the page.” That must be a boon for an adaptor, though in this case, matters were somewhat complicated by the fact the novel plays out across two timeframes. “So quite often it’s structurally complex to unpick, but the emotional strength and that bittersweet tragicomedic tone she has, it’s my favourite kind of thing,” Williams continues.

“It would have been hard for me to adapt a book on slavery that was unremittingly harrowing. I would have found it a hard watch, never mind a hard write. For me, what she manages to do is to take you on a very emotional road that has pain but also laughter. That’s why I respond to it so strongly. There are some very funny moments but it’s never trivialising the subject matter.”

The writer says the biggest challenge on The Long Song was to condense the timeline that spans July’s life, but notes that when she’s penning an adaptation, her job is to be as invisible as possible. Her role, she explains, “is to get Andrea’s vision onto the screen without interfering. When you’re dealing with a really good book, like this one, my note to myself is invent as little as possible and try to present the story as authentically as possible. Keep as close to the book as you can.”

That might be an approach that is at odds with many other adaptors, who may seek to reinvent or install some dramatic changes to the source material.

Williams would agree, were she adapting Pride & Prejudice, for example, as it’s been done many times before. “But I didn’t feel my take on this book was as important as this book. For me, that’s been the priority. Other people might read the script and think, ‘Oh, Sarah, you’re all over this.’ But I don’t think so. People make a lot of fuss about adapting books and all you want is all the best bits of the book in one place and put into a screenplay structure, which I think we all know by now.

“It’s about finding a beginning, a middle and an end, and however many acts you think it is. You’re guided by your instincts.”

The writer admits she had to make some tough decisions about what to keep or cut from the novel, but says the spirit of the book and its characters are alive and well. That was particularly important in terms of the slaves, who “weren’t just a collection of faceless suffering humans. They were individuals with charisma and humour; they were honourable and dishonourable”

Williams continues: “What Andrea wanted to make clear was they didn’t see themselves as victims, and they had a huge amount of spirit. That’s what we’ve also tried to do in the screen version – to show the variety and the spirit of the characters in the book. They’re not all, as is sometimes portrayed, noble and wonderful people. They’re just as flawed as the rest of us, so that was a great pull for me. There’s a great complexity and nuance to the way she draws her characters. So everyone is flawed in the book, including the heroine.”

Williams says she couldn’t have asked for a better director than Belo, whom she believes has an “amazing visual style.” The writer adds: “She’s a really strong director and I think she’s really one to watch. She’s going to have a fantastically bright future.”

Belo came to the attention of The Long Song’s producers after Ellen, her acclaimed 2016 one-off drama for Channel 4, led to her winning a Bafta award for breakthrough talent the following year. Belo was sent Levy’s novel by exec producer Rosie Alison, though she subsequently made six-part BBC drama Requiem and had been planning a feature project when The Long Song came around again. “This narrative, this story, I couldn’t not do it,” she says. “Andrea seemed to want me to do it as well, and this story really needed to be told. That feeling was overwhelming and it’s scary because it’s so important.”

Like Williams, the director knew about slavery mainly from lessons about US history and not about the British involvement. She also finds the story relevant today, particularly following the Windrush scandal that saw many people – members of the ‘Windrush generation’ who arrived in the country from Caribbean countries more than 50 years ago – wrongly deported from Britain.

“It’s relevant and I think it’s scary. This story should have been told a long time ago,” Belo says. “It should be in everybody’s consciousness. Britain’s wonderful and brilliant but it’s done some atrocious things, and those things can be healed if they’re talked about.”

She says The Long Song’s non-linear format makes the drama stand out, while Williams’ scripts presented a different way of telling a story, “which is quite exciting for me to get my teeth into.”

On set, Belo reunited with long-time DOP Chloë Thomson (Requiem, Ellen), with whom she came through film school. The pair have established a shorthand in terms of looking at the perspective of a scene, its tone and how to capture characters and their emotional state.

That The Long Song was also her first period drama presented some new challenges for Belo, not least working with horses. “I was always waiting a long time for a horse,” she jokes. “You can’t just say, ‘Let’s get on the horse and go.’ Two hours later, ‘We’ve got the horse.’”

Time was spent ensuring historical accuracy with costumes as well as finding period buildings and the right locations, while the setting of the drama also informed Belo’s filming style. “There’s a formality that can be quite fun for a period piece because, if you upend it every now and again, you actually really feel it, which I found quite fun,” she says. “You can find something a bit more modern within a period drama and pay your respects to period drama.”

The Long Song, which is distributed by NBCUniversal International Distribution, was shot over seven weeks on location in the Dominican Republic, which Belo describes as both “difficult and brilliant.” She found support from a willing crew that was heavily invested in the project, working in an environment that boasted vast cane fields, forests and tropical landscapes, as well as an assortment of wildlife.

“One thing I would have liked would have been to be able to get a bit more of an architectural sense of Jamaica. We struggled to find that where we were because it has a more Hispanic and Spanish-speaking influence,” Belo says. “In terms of what else we had to offer, it was really exciting and there was a lot of goodwill all round.”

Belo also praises the ensemble cast – led by Lawrance, Atwell, Lowden and Sir Lenny Henry, who plays Godfrey – noting that they all took a deep interest in the subject matter and embedded themselves in this world and what it would have been like for the characters they play.

“One of the best scenes was when I had most of the house slaves around a table and the white plantation owners eating this Christmas dinner and suddenly realising the point of view is not at the table where it would normally be from, it’s from the edges,” Belo says. “Everybody around this table can hear exactly what’s going on, and this would have happened. There were people with opinions and points of view who have been completely erased from history and I get to recreate it. That was really exciting. It felt good.”

Belo hopes the drama, launching on BBC1 on December 18, leaves people thinking about history’s impact on today’s culture and looking at the world slightly differently. “By looking at the past, we can make quite a lot of sense of the present and of racism, and racism we don’t even recognise,” she adds. “Maybe people might be a little more wised-up to that. That would be great. I feel quite deeply about it all.”