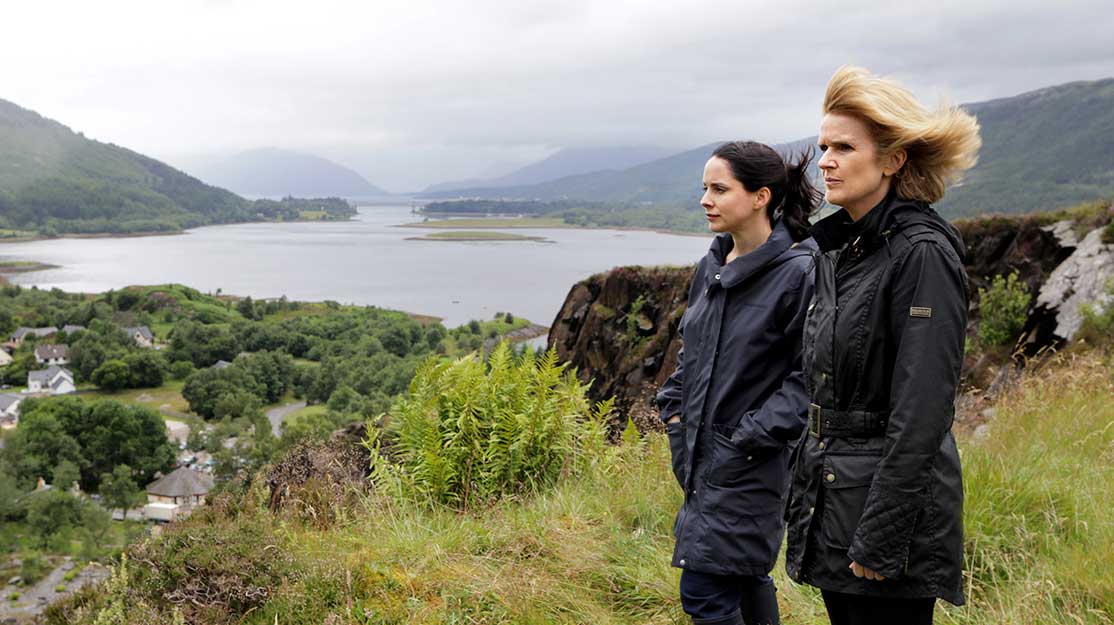 A new ITV drama finds its name and setting in Scotland’s Loch Ness, where the only monsters are the ones lurking on land. DQ chats to the cast about crime series The Loch.

When actors Siobhan Finneran and Laura Fraser (pictured left and right respectively above) are asked to describe their time on The Loch, they both recall the same experience from filming the six-part crime drama.

“I absolutely love Siobhan — she’s a scream,” Fraser says. “We laughed so much that I think it got really annoying for the crew. At first it’s good because it’s a nice atmosphere and people are giggling. But we just couldn’t get it done half the time! Take after take, I just couldn’t stop laughing.”

“We were very giggly,” Finneran adds. “We were surprised they got any footage with both of us in shot at the same time when we’re not laughing. They must have hours of outtakes of us roaring with laughter, which is not good when the subject matter is so serious.”

As Finneran suggests, their illustration of a relaxed, harmonious atmosphere on set – both in studios outside Glasgow and on location in the Scottish Highlands – is at odds with the tense, edgy tone on screen, where the search for a serial killer grips a small community living beside the beautiful but haunting Loch Ness.

Fraser plays local detective Annie Redford, who is enjoying a day off when a man’s body is found at the bottom of a mountain and a human heart washes up on the loch’s shore. Under the watchful eye of her boss, DCI Frank Smilie (John Sessions), Annie begins to feel the strain of her first murder case when DCI Lauren Quigley (Finneran) arrives to lead the investigation.

Finneran has been a regular fixture on British TV recently, with credits including The Moorside, Happy Valley and a three-season turn as the scheming maid Sarah O’Brien in Downton Abbey. As for The Loch, which debuts on Sunday June 11, the actor says she was drawn in by the murder mystery at its heart – and the chance to play a police officer for the first time in more than a decade.

“I really enjoyed reading the scripts, and sometimes that is a big green light to me,” she says. “Sometimes with scripts, you can lose the will to live after a couple of pages, or you just think, ‘This is not for me,’ or you can’t see yourself in the role.

“With this one, I enjoyed reading it and I was also delighted it would be shot in Glasgow, because I’d never been. So it was lovely to be able to go up there –  I fell in love with Glasgow and its people. I loved the architecture. If it didn’t rain more than it does in Manchester [where she is based], I could live there because I loved it so much. But it does rain all the time!”

Finneran describes her character as an outsider who comes in and takes over – a move that doesn’t sit well with Sessions’ DCI Smilie, with whom Quigley shares a chequered history.

“How I play a character usually comes from conversations I have with the director and the producer, and sometimes the writer,” she explains. “But I tend to find clues in the script as to who she is, and they’ll come either from her lines or something other characters say about her. With The Loch I’ve got quite a wealth of that, even in the first episode. She’s got some cracking lines, and John Sessions’ character has a history with her, so before I’ve even been introduced on screen, somebody’s already given their description and opinion of the character. That’s how I tend to work; I didn’t have input into how she was written at all but I do pick up clues in the script.”

Having made her name in the US on shows such as Breaking Bad and Black Box, it’s been a busy couple of years back in the UK for Scottish actor Fraser. She appeared in ITV feature-length drama Peter & Wendy and BBC shows One of Us and The Missing before filming The Loch last summer.

“I’m starting to think I can solve crimes now,” she jokes, having previously played police officers in both One of Us and The Missing. “I enjoy playing them because it gives you another context – as well as your emotional drama, you have this other thing going on.

“In The Loch, I liked the idea that Annie’s a newbie. She’s been working all her life but never really moved up the ranks; she’s made certain decisions that have kept her from moving up, so there’s a pent-up potential that is verging on bitterness. She’s teetering on the edge of being furious at herself. I liked that idea, and the fact her first murder case becomes this serial killer investigation is pretty overwhelming.”

Fraser describes the series’ Scottish Highlands setting as a “stunning” backdrop to the events that unfold within this close-knit community.

“You’d think I’d have been to Loch Ness, as a Scottish person, but I hadn’t ever visited,” the actor admits. “It’s beautiful. It’s quite interesting the fact it was built on a fault line, so while there are ruptures in the land, there are also ruptures in the community [in the series]. It’s like this paper-thin veneer of civilisation is ripped apart, and the ruptures are felt in my character’s family. It’s all very exciting! It’s interesting, this idea of things lurking just beneath the surface, whether that’s metaphorically or physically.”

Completing The Loch’s leading line-up is Sessions, who has enjoyed a long career in film and TV, with small-screen credits including Sherlock and Outlander. But when it comes to choosing his next role, he admits that unless you happen to be Benedict Cumberbatch or Tom Hiddleston, “you do what comes along.”

The Loch, however, was “a very good piece” and, as he hadn’t previously appeared in a TV drama revolving around a serial killer, he was keen to join the production.

“Nobody thought of me for Broadchurch, Shetland or the others,” he says, before adding that he’s not too comfortable with the dark subjects often at the centre of television shows. “It slightly disquiets me that a huge amount of drama now is to do with murder, rape, torture and child-targeted crimes and that becomes the bread and butter of television. Maybe I’m just an old fuddy-duddy.

“It was great to be in these incredible locations [for The Loch] and to be playing Frank – you cross all the boxes with him. He is sexist and is capable of telling a pretty obscene story. Then along comes not only a woman [Finneran’s Quigley] but a woman he’s had a professional embarrassment with some years before. We gleam fairly rapidly that the friction between them is engendered by the fact she knows he fucked up rather badly [in the past] and she saved his arse, and he doesn’t like that he’s beholden to this woman.”

Sessions is also full of praise for lead director Kelly, who runs “a very relaxed but very tight ship.”

“He has a wonderful sense, which is particularly important on a show like this, for knowing exactly what your character is thinking at that moment. Brian is one of those guys who can keep that all in his head,” he says.

“We progressed more or less chronologically through the story, which was good. Obviously you’re also trying to play little moments where your character is looking uncomfortable and you want viewers to wonder whether that’s because he’s guilty or because he’s a bit remiss. You try to suggest ambiguity. It’s also tricky because you’re trying to suggest this and that are possible while at the same time maintaining an overall logic to the likelihood of what is going to happen.”

Finneran points out that, despite the show’s content, the cast and crew kept things light on set. “The subject matter might be serious and we might have big dramatic things to do but we didn’t take ourselves seriously and were always up for a bit of fun,” she says. “Sometimes you do just question what you’re doing. Sometimes it’s a ridiculous day – you’re stood looking at bits of bodies and you wonder, how do people actually do this? We’re pretending.

“I can absolutely leave things at work. I can take a bad day home with me if I don’t feel like I’ve done a scene as well as I’d hoped or if something’s gone wrong, but that’s not taking the show home with me, just my disappointment. And you can have draining days, where the subject matter has been exhausting, but they tend to be days where you’re very emotionally charged. And a lot of the time you’re just exhausted. But I didn’t have any of those days on this.”

But while she has been enjoying a fruitful period on screen over the past few years, Finneran recognises that not all actors have the same opportunities.

“For the past 10 years, I’ve been very lucky and worked on some incredible dramas,” she adds. “But if you’d talk to a couple of [actor] mates of mine, they’d say it’s a shocking situation to be in. I just have to think myself very lucky that I’m working. There is good stuff being made all the time – I just don’t watch it!”