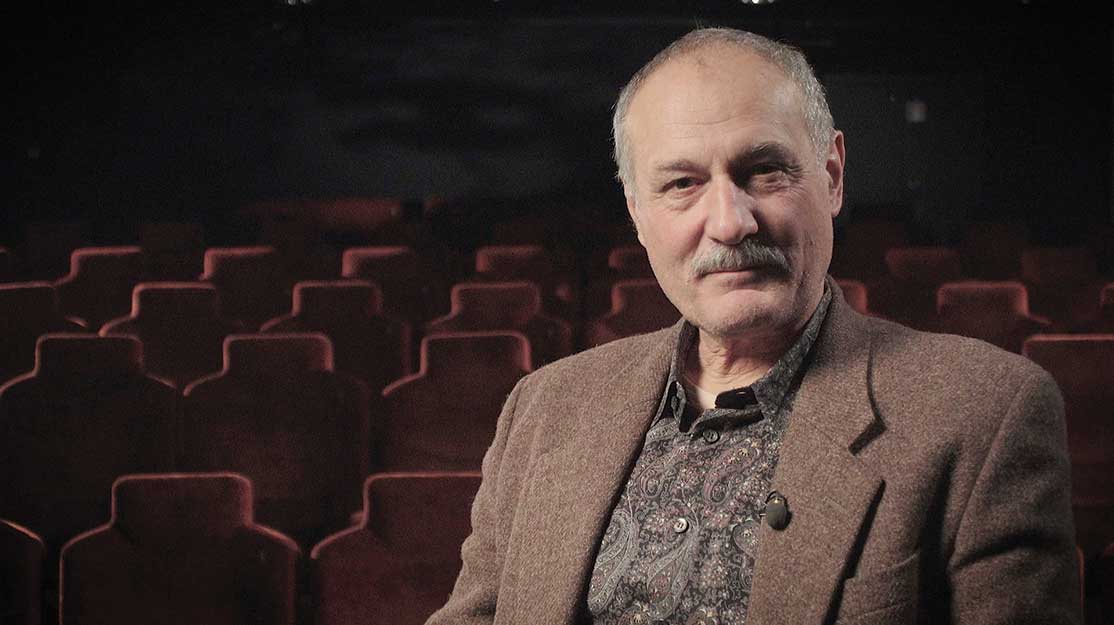 Tony Grisoni enthuses about the merits of collaboration as he discusses career highlights including Southcliffe and Red Riding and reveals more about new projects The City & The City and Philip K Dick anthology Do Androids Dream of Electric Sheep?.

The best thing and the worst thing about being a screenwriter is that it takes a lot of people to make a film – it’s no good unless it’s actually made into something,” Tony Grisoni (pictured above), the award-winning writer of The Brothers Grimm, Red Riding and Southcliffe, explains thoughtfully. “I love that social part, that collaboration, but if you’re spending a lot of time writing and nothing’s happening, it can be tough.”

It’s fair to say that’s not a problem the 64-year-old Grisoni faces too often these days. Since his breakthrough feature Queen of Hearts back in 1989, he’s had something produced at least once every year – from 1998’s Fear & Loathing in Las Vegas, through 2009/10’s purple patch of Red Riding and Southcliffe, to his collaboration with writer-director Paolo Sorrentino for Sky’s The Young Pope.

And yet one crucial part of his overall writing process effectively depends on dry spells – his unpaid collaborations with conceptual artists like sculptor Brian Catling. “There’s no money involved – it’s just somewhere to play,” he says, grinning widely. “We’ll make the kind of films no one would commission. But the important thing is that it stirs the cauldron. There are lots of ideas that begin there – in Southcliffe there’s an old lady with Alzheimer’s who had her beginnings in a piece I did with an artist Oona Grimes, for instance. It keeps you alive and it keeps you inventing.”

It’s the kind of spirit that took him from sound assistant, through production manager, to runner, then assistant director on commercials and music videos across the 1970s and 1980s. “I spent my spare time writing ideas for films, or sometimes collaging images, and I shot bits of Super 8,” he explains. “It was a way of starting the filmmaking process without the funds or army of people. Then a friend who had risen up the ranks got me a commission, but it was five years before Queen of Hearts got made.”

Queen of Hearts’ story of Italians immigrants wasn’t exactly autobiographical but it was rooted in a lifetime of research growing up in London’s Italian community. Since then, deep research has been the core of half of Grisoni’s work. In 2001, he made the trek along the people-smuggling route from the Pakistan/Afghan border, through Iran and Turkey, to Europe with director Michael Winterbottom.

“When Michael said he wanted a refugee journey shot documentary-style with non-professional actors – or what we call real people – it meant I had to think carefully about the writing,” he recalls. “How are you going to write dialogue when they can’t deliver it? The starting point was to meet a lot of people who had been smuggled overland into London. Then we went out and tested the route – dangerous things happened to us and I thought that was such an exciting way to write, because instead of me making stuff, it’s about real experiences.”

The resulting film, In This World, won the 2002 Berlinale Golden Bear. Similar research infused 2008’s Kingsland, a collection of short films that Grisoni directed as well as wrote, based on a gang fight in his Hackney neighbourhood. Even the modern gothic thriller Southcliffe was based on his research into shooting sprees such as those that occurred in Hungerford (1967) and Dunblane (1996).

“I started with the idea of writing a series set in Faversham, a market town in Kent, and I wanted to explore how a community coped with a number of people dying in this small town,” Grisoni explains. “The most interesting thing was to have someone from within the community have executed these people – it makes it more complex. All credit to Channel 4, they agreed to that when I didn’t know if it was three, four or five parts. I didn’t know what happened, I knew a lot of people died and that was kind of it.”

From Southcliffe’s first draft, the writer opted to identify the killer in the first scene – “because it was about how it happened, not who did it,” he explains. “I knew that if you saw someone doing something atrocious and then you saw him repairing a radiator, you wouldn’t be able to take your eyes off him. That non-linear approach engages me as a viewer because I’ve become part of the storytelling. I’m not just being fed stuff; I’m trying to puzzle it out.”

If research is roughly half Grisoni’s writing practice, adaptations are effectively the other half. “I think it’s unlikely that a production company will come to me with an idea they’ve researched as a package and say, ‘Are you up for this?’” he explains. “I find it very difficult to get into those projects. I always feel they’ve been very thought out by someone else. But if someone brings me a book and asks if I’m interested then it could happen.”

For Grisoni’s remarkable Red Riding trilogy, that’s exactly what took place. “I knew Anne Reid and Revolution Films after In This World,” he says. “They came with this quartet of books by David Peace and asked if I was interested in adapting them. I started reading the first one. It’s difficult to describe them, they’re so angry and they’re full of literary experiment but they’re also exciting, with images that repel you but draw you in at the same time. I was scared of them, to be honest, and so I said I’d only do the first one.

“Then I kept reading and had conversations over meals and drinks and, finally, I gave in and did them all. I just waded in and started to take the books to pieces. It helps to have someone – a producer – who’s on top of the books and effectively plots which character is where for you, who you can check in with every day. That’s the main thing about adapting.”

Grisoni clearly loves working on books that would scare other writers. His version of the China Mieville novel The City & The City – which will air on the BBC as a four-part drama later in 2017 – is a case in point. “It’s a noir-ish detective story in two cities – one Eastern European and crumbling, and one all glass and steel. But they coexist in the same geographical space,” he grins. “The populations of each city know it’s a sin to see the other. Once you’ve got that wrinkle, you’ve got your detective story and it becomes very interesting and very complex. And almost impossible to adapt, by the way,” he bursts out laughing. “That’s when you need a good director to fix everything.”

If Grisoni likes working with good directors, they love working with him. He’s written for and with Monty Python member Terry Gilliam on The Brothers Grimm and Fear & Loathing in Las Vegas. “Working with Terry is like a hard play,” he nods. “For Fear & Loathing he’d seen loads of scripts – including one by Hunter S Thompson [the author of the autobiographical novel] – but he didn’t like them, so we tore the book in half. He took the front half and I took the second half and we collaged it. When we needed lines or events or anything, we took them from the book. It’s about people trusting you, people being willing to take a risk.”

Grisoni also wrote the script for Gilliam’s The Man Who Killed Don Quixote – a movie that famously collapsed back in 2000 while a documentary crew were following the making of the film. “Keith Fulton and Louis Pepe were documenting us not making this film – there was one point where it was clearly collapsing and they said to Terry, who was mic’d up all the time, do you want us to stop filming?” Grisoni recalls. “He said, ‘No, someone has to get a film out of this.’”

The resulting 2002 doc – Lost in La Mancha – appealed to Grisoni and he worked with Fulton and Pepe on Brothers of the Head, a dark tale of conjoined twins. “But Don Quixote is finally due to shoot next year – I’ve been re-writing it twice a year for the past 17 years and the script’s getting OK now,” he laughs.

If there’s one project that knits together all Grisoni’s technique and learning, it’s his contribution to Channel 4’s forthcoming Philip K Dick anthology series Do Androids Dream of Electric Sheep?. His script is part research, part adaptation and part lived experience. And, in a way, he’s been working on it for years.

“Ages ago I came across a Philip K Dick interview about a story he hadn’t got around to writing, about a really crap film composer who’s kidnapped by aliens so fascinated by sound that they biochip one of their kind into his head and send him back out into the world where he starts to compose amazing avant garde music,” Grisoni explains enthusiastically. “I wanted to write that story and dovetail Philip K Dick’s life with it, so I went to California and met his five ex-wives and his friends, and [visited] the places where he saw God.

“It was the most intensive bit of research I’d ever done. Towards the end I was staying with ex-wife three and every time I used the bathroom there was this frog sitting watching me. On the last day, I looked at it and thought, ‘There’s something about that frog’s face that looks a bit like Phil K Dick.’ The moment I thought that, the frog just disappeared and I thought, ‘I have to go home now, this project is too much.’”

Recently, Sony and Channel 4 approached Grisoni to contribute to the anthology – “and I’ve never written anything faster,” he grins. “It’s purely because that frog story was there waiting to go into something. Very often someone gives you a book or suggests something and you pick up on it because it connects with something you were thinking earlier but just couldn’t crack,” he smiles. “That’s the other best/worst thing about being a screenwriter – everything is material.”