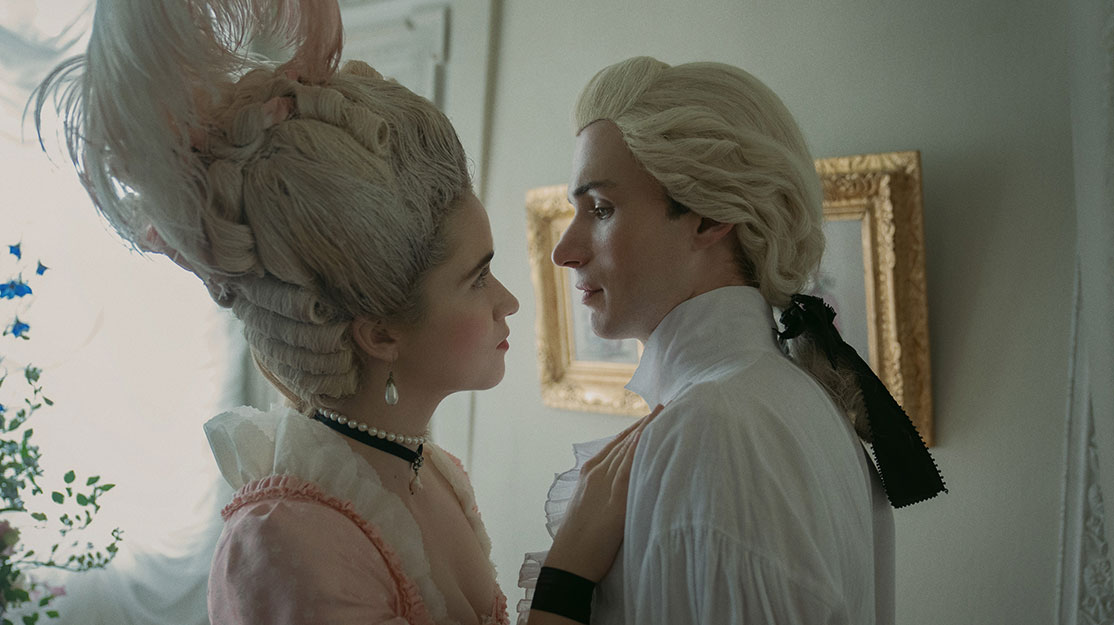 Writer Harriet Warner, executive producer Colin Callender and the cast of Dangerous Liaisons talk up Starz and Lionsgate+’s small-screen prequel to the classic French novel and discuss telling this iconic love story from a female perspective.

It has now had a seductive, small-screen reinterpretation, also called Dangerous Liaisons, by writer Harriet Warner (Tell Me Your Secrets), who has created a prelude to Laclos’s 1782 story – which plays out over a series of letters – by focusing on the origin story of how his iconic characters, the Vicomte de Valmont and the Marquise de Merteuil, met as passionate young lovers in Paris on the eve of the revolution.

Therefore, the series is set in pre-revolutionary Paris and sees the pair driven to right the wrongs of their past and relying on their skills of seduction and manipulation of not only the French nobility but also each other.

Camille (Alice Englert), who is taken in by the current Marquise de Merteuil (Lesley Manville), navigates her own path in a world of men, using the power of secrets to take back control, while Pascal Valmont (Nicholas Denton) will stop at nothing to regain the title that was recently taken from him.

Renewed for a second season before its debut earlier this month, Dangerous Liaisons is produced by Playground and Flame Ventures in association with Lionsgate Television. Warner is the showrunner and an executive producer alongside Colin Callender (Playground), Tony Krantz (Flame Ventures), Scott Huff and Christopher Hampton.

Speaking at an event marking the launch of streaming platform Lionsgate+, which carries the series internationally, Warner, Callender and the cast reflected on the show’s portrayal of the romance at the heart of the story and how they hope to upend expectations of traditional period dramas.

Harriet, how did you come to the project?
Warner: It’s really interesting because I always adored the novel, and when Colin reached out to ask if I would be interested in adapting it, of course you jump at the chance to work with Colin.
But to look at [the novel] again and see something that needed quite a lot of work for a feminist to write, it was a challenge. When I went back to it, one of the extraordinary things that jumped out was Letter 81, which is written from the Marquise, and it really was a portrait of a woman who had recreated herself and had invented a façade, in a way.
That, for me, was the real ignition [for writing the project] because Camille was my guiding light. It was guiding a really strong female story, and to be able to touch on all the wonderful themes of the novel and the sense of time and place, 18th century Paris, was an absolute gift. But I’m a feminist first and foremost, so it was always going to be a reinvention and a prelude to that novel.

For people who know the story, how are you hoping to upend expectations?
Callender: This is the ultimate love story – boy meets girl, boy loses girl, boy meets girl, boy loses girl… that’s the device that runs through the whole series. The other thing is some of the best dramas have something called UST – unresolved sexual tension – and right at the core of this drama is the relationship between Camille and Valmont. That’s a perennial love story that audiences love, whatever setting you place it in.
Another thing is that letter Harriet refers to, which for me was a defining moment in thinking about the series, because it’s a manifesto for women about how to navigate a male world. I have two daughters who are entering the world as 19- and 21-year-olds and they are going to have to do that.
This [project] came about just about the time [Donald] Trump became president in the US, and I suddenly realised my daughters were entering into a Trump world. Camille, in this story, is entering into a world where men can do whatever they want and get away with it. But women, if they make one mistake, are ruined. That’s right at the core of this, and Camille is a heroine.
One thing about the series is the title is well known to everyone. People know the film but, of course, in the film, the character Alice plays dies at the end. So when we thought about how we turn this into a series, we thought, ‘We can’t pick up where the film ends because there’s no character,’ so we thought it would be very interesting to explore how these characters become who they are and how they navigate the world.

What was important when finding the cast?
Warner: We talked about finding resonance with now, but it’s something – and we’ve always said this – we’ve never had to reach for. There was a timeless quality to the show, and every one of these amazing actors has that. They are all extraordinary; they have a timeless quality that brings this period show to something that feels very contemporary but isn’t. It’s almost happened by accident through the nature of the performances and the storytelling.

Callender: The other thing is the audience today wants to be surprised and they want to discover things. They want to be taken to another world and they want to see actors they’ve never seen before. Part of the excitement of making the show was bringing Alice and Nicholas together and introducing them to a global audience who may have seen them in other things but will really discover them in this.
Carice and Paloma, who have a range of [credits], come to their roles in a very surprising way. Then, of course, we have actors who are very established, so it’s a wonderful mix. This is what the audience wants. The audience wants to be taken to a world they haven’t been to before that they maybe want to be a part of, and they want to discover characters and actors they don’t know. That’s a great plus, and we deliver that in spades.

Alice, what made you fall in love with Camille?
Englert: What I loved the most about her – and what makes her really a feminist for me – is she’s not just a heroine. She’s actually going to end up the opposite, and that’s what I’m looking for – permission to play somebody who’s actually not that good but they really thought they were at one point. It’s fucking tragic. It’s like all you’re left with is frustration and compassion and an unresolved tension with character. I really love this about her.

Nicholas, why is Camille attracted to Valmont?
Denton: What I saw and worked on with Leo [Leonora Lonsdale, director] when I first got the job was that their relationship was so pure and honest and there was something free and wild in it. We realised we had this rough-and-tumble way in which we navigated our scenes and the relationship, which was so different for [Valmont]. He’s grown up in the aristocracy, blockaded from the rest of the world. That pure freedom is such a beautiful thing they have bouncing back and forth.

Kosar, tell us about your character Victoire, who is Camille’s companion.
Ali: Victoire is absolutely beautiful. She’s a young lady evolving in a harsh world, and to have someone like Camille – they grow through that together – is really beautiful to see. What I admired most about Victoire is her bravery. That’s what stood out the most to me – how ambitious she is, how brave she is, and also how much there still is to discover about her.

Carice, we don’t meet Jacqueline until episode three. What are her intentions?
Van Houten: What I really was attracted to was the fact she is so unexpectedly connected to Alice’s character and how we all, as women, are connected to the story, even though we’re in completely different situations. My character is also so trapped, so fucked, with her husband, and not being able to become a mother is a huge grief for her. As a woman, you’re defined by that, definitely at that time [in the 18th century]. So she carries this big grief and is stuck in this religious world and is almost in the shadows, even though she wears white. There’s something very tragic about her.

Paloma, what conversations did you have with Harriet about Florence?
Faith: [Florence] is a bit of a bitch, really. But what unites the female characters is they’re in this hugely patriarchal era where they’re fearful and completely aware of what their power is, which is essentially viewed by society as nothing. But all the female characters in the show subconsciously, and later consciously, realise they do have power when they help each other out. Even if they get pitted against each other – which happens still in modern life, where women are constantly pitted against each other, particularly when it comes to success – they realise that actually they’re much more powerful when they help each other out.
There’s this theatre of, ‘I don’t like you,’ but really, deep down, there’s mutual understanding. It’s a bit like everyone’s dressed up as meringues on Jerry Springer, when they all fight each other, all these women, and then suddenly they look to the guy and realise, ‘Shit, he’s the core of it.’ It’s a cake shop Jerry Springer.