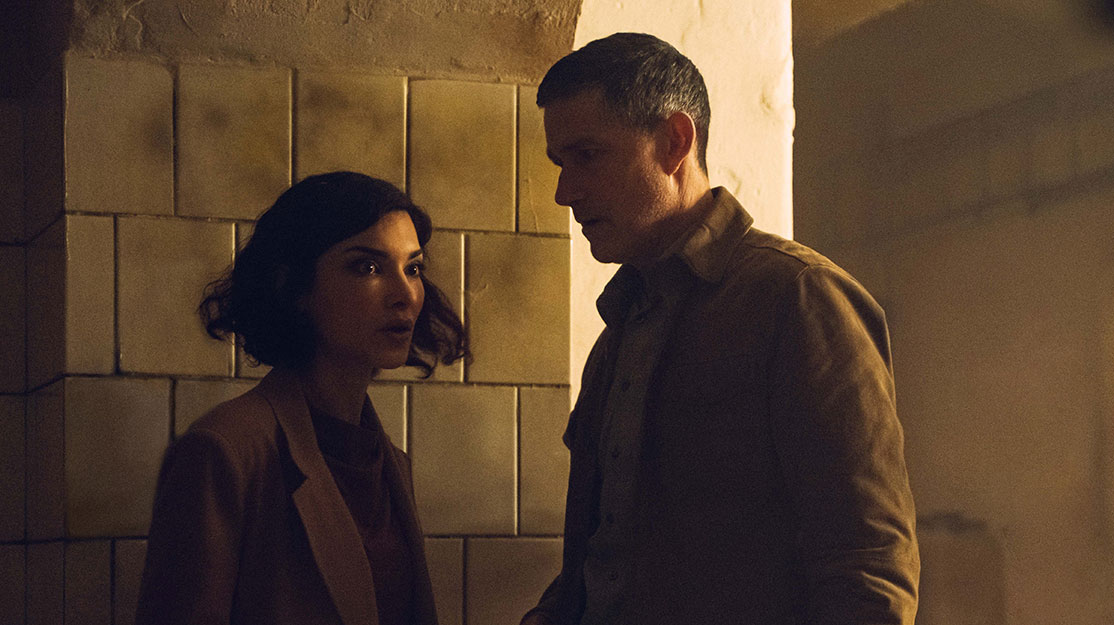 US director Dennie Gordon illuminates DQ on how she brought her taste for action drama to Last Light, a globetrotting family drama set at the start of an energy crisis that threatens to disrupt every corner of society.

Across an extensive film and television career stretching back almost 30 years, Dennie Gordon has directed shows ranging from Party of Five and Ally McBeal to Jack Ryan and Hell on Wheels. Yet it’s her latest work shooting all five episodes of thriller miniseries Last Light that she describes as her best moment in the business.

“Looking back, it was probably a career high for me,” she tells DQ, “because I was the director of all five, I had an amazing studio in MGM, where everyone was supporting me every step of the way, and I lucked out with having my dream cast. All the elements aligned to create an amazing experience. I can very easily say it was a career high.”

Based on the novel of the same name by Alex Scarrow, the series tells the story of a family fighting to survive during the fallout from an oil crisis. Lost star Matthew Fox returns to the small screen as petrochemist Andy, who knows how dependent the world is on oil. While on a business trip to the Middle East, Andy realises something is wrong in the supply chain – and the consequences affect everything from transportation to law enforcement.

At the same time, Andy’s teenage eco-warrior daughter Laura (Alyth Ross) is alone in London while his wife, Elena (Downton Abbey’s Joanne Froggatt) and young son Sam (Taylor Fay) are in Paris. Amid this chaos, each family member will sacrifice everything to find one another, despite the distance and the dangers that separate them.

Having shot Last Light on location in Prague, Paris and Abu Dhabi, Gordon jokes that she has been “living and breathing” the show 24/7 for more than a year. The series had its world premiere at the Monte Carlo TV Festival in June, but when DQ later speaks to the director, she is still in post-production ahead of Last Light’s launch on US streamer Peacock on September 8.

“The funny thing is, whenever you go into a project, you know you’re going to be stressed on budget and that you’re going to have to make some hard choices,” she says. “But we all just accepted everything, all the obstacles, because we all felt so strongly that we were telling a really important story. We felt we had to do [whatever it took] to get this made and get it made now because we felt it was so ripped from the headlines.”

Emphasising that point, production coincided with petrol shortages across the UK, leading to long queues of cars and vans snaking along roads in a desperate bid to fill up. “All of these things started happening and we’re like, ‘Oh my God, we’re actually living the show.’ We didn’t want to be so prescient. We actually felt more terrible as it went on, like, ‘Oh man, we didn’t think this would all come to pass so quickly.’”

Gordon says she found inspiration for the series, which takes place at the start of a global energy crisis, in 2006 dystopian thriller Children of Men, which is set 20 years after war, infertility and worldwide depression have pushed humanity to the brink of extinction.

The director worked with Last Light’s designers to include references to the Alfonso Cuarón film, wanting to similarly show how quickly things can deteriorate. The empty supermarket shelves seen during the height of the Covid-19 pandemic were also still in her mind.

“It didn’t take long for people to really be in trouble [during the pandemic], so we wanted to touch on that,” Gordon says. “But like Children of Men, we wanted to have a shred of hope at the end. Maybe this is just around the corner if we do nothing, but that’s not our only choice. We can do something. We can do many wonderful small things to affect change. That was our goal for the show, to provoke this conversation about what we can do or should do, and how quickly we must do it.”

But viewers shouldn’t be quick to dismiss Last Light as a morality tale wrapped in dystopian dressing.  “In our case, a lot of that dystopian world was very far in the background. It’s normal Paris, normal London, the normal Middle East. Slowly, you start to see some systems breaking down, but that’s in the background,” Gordon notes of the show, which is produced in partnership with Peacock, Nordic streamer Viaplay, Australia’s Stan and MBC in the Middle East. MGM International is the distributor.

“What’s very foreground here is this family story – this mother and father, these two children and their plight as they’re pulled apart, and that is very much the heart and centre of our story. There’s no spoon-feeding the message here. We’re looking at a family drama and, in the end, there are revelations to be made. But front and centre is this family that we care so much about. We want to know they’re going to be OK.”

After seeing Gordon’s work on HBO martial arts drama Warrior, producer MGM International Television Productions “hunted down” the director to take on Last Light. She knew the series – written by Patrick Massett and John Zinman – would need a lot of work to translate Scarrow’s story from the page to the screen, but couldn’t resist the family drama at its core, set against the backdrop of eco-terrorism and the message that the world needs to withdraw from its dependency on oil.

“The whole bouillabaisse excited me,” she says. “But some people also know I’m a big action director and I saw this wonderful opportunity, just as this family is pulled apart, for some very exciting action, which we were able to do in Prague, Paris, Abu Dhabi and out in the desert in the Middle East. It was really exciting.”

Backed by MGM, the creative team aimed to make the show as entertaining and relatable as possible, despite the subject matter. And with a “dream cast” comprising Fox, Froggatt, Fay and Ross – whom Gordon describes as “the next Meryl Streep” – they worked to make the show a reality during the height of the pandemic.

“Everybody was absolutely devoted to keeping healthy so that we could keep going, and everybody was very respectful of our Covid bubble,” the director says of the health challenges. “But when we got to Abu Dhabi, we were struck down. We lost half of our local team, so all my Prague people were doing two and three jobs. But I was very blessed, I didn’t get it, and my main cast didn’t get it. We were able to keep on going. You just have to respect the bubble and carry on.”

Ever since she trained at the heels of writers such as David E Kelley (Ally McBeal) and Aaron Sorkin (Sports Night), a good story has always been at the heart of every project Gordon has undertaken – whether that’s a comedy like The Office or working with Billy Bob Thornton on Goliath.

Then once she’s on board, it’s a matter of building her team. In the case of Last Light, Patrick Murguia joined as cinematographer and Martin Vackár as production designer. Together, they built an idea of the world in which the story is set, considering what would be happening in cities around the globe as the lights start to go out, cars stop and rolling blackouts are imposed.

“It’s always important to try to get my visual team together, and then we start to navigate our way through it,” Gordon says. “I’m very visual when I put these scenes together. I like to create an image system or a mood board. I have a graphic artist who I love in LA, and before we even had a green light, we were together pulling images. That was very important because when I land wherever I’m going to be shooting next, I love to arrive and say, ‘Let’s start the conversation with this. Let’s look at these images. This is what we’re thinking.’ That’s one of the most fun parts of the job for me.”

However, the prospect of directing all five episodes was a “gigantic thing. I felt like I was carrying a boulder around,” Gordon admits of the “heavy responsibility” of shepherding the project through production – a decision bolstered by MGM, which didn’t want to bring in a series of different directors.

“But it was also an incredibly exciting opportunity for a visual director like me. It’s exciting and terrifying all at once. If it works out, great, but if you blow it for any reason, you’ll take it hard. I was exhausted when we wrapped, but I loved every minute of it.”

Producing such a globetrotting series on a budget of around US$2.7m per episode meant money was relatively tight, so the production team had to get creative. Sets would be hosed down to make it appear it had just rained, rather than bringing in a more expensive rain machine, for example.

“It’s that film school ingenuity,” says Gordon. “We were continually pulling out every trick in the book. I am just so proud of what we achieved with the tiniest of budgets. When I did [Prime Video series] Jack Ryan, we had over $15m. There are many reasons why the budget numbers were so high, the least of which was we were in eight locations around the globe – Moscow, London, San Diego, Bogota, the deserts of Colombia… It was just a massive undertaking. After Jack Ryan, this felt manageable.”

Once on set, Gordon believes it’s her job to work with the cast at their own pace. Fox and Froggatt were key to making young actors Ross and Fay as comfortable as possible, while Gordon also knew not to over-rehearse with Fox, an actor she describes as “very cerebral” and well prepared.

“I never wanted to waste him on a lot of rehearsals, even though we thought, ‘Well, the rest of the family could use a lot of effort because they’re new at this.’ But one of the things I did do was I took the cast out for meals,” she says. “We took them to restaurants and just turned them loose and I’d be on the sidelines. Everybody had to stay in character. Some amazing discoveries were made. It was incredibly fun and so fruitful because it was a fun way for them to learn the family dynamic. We also had another wonderful cast member, Tom Wlaschiha, from Game of Thrones, and he was a great asset for the new kids as well.”

Gordon is now looking forward to seeing how viewers respond to the series once it lands around the world. With a nod to the hit-and-miss nature of TV dramas, she says: “You never know how something is going to go. You can be excited about it and it just doesn’t quite get seen. But we’re quite confident that people will spark to the trailers and spark to Matthew Fox and Jo Froggatt.

“They’ll be curious – and once you start watching the show, you’re addicted. It’s compulsive. You just care so much about these people. You need to know they’re going to be OK.”