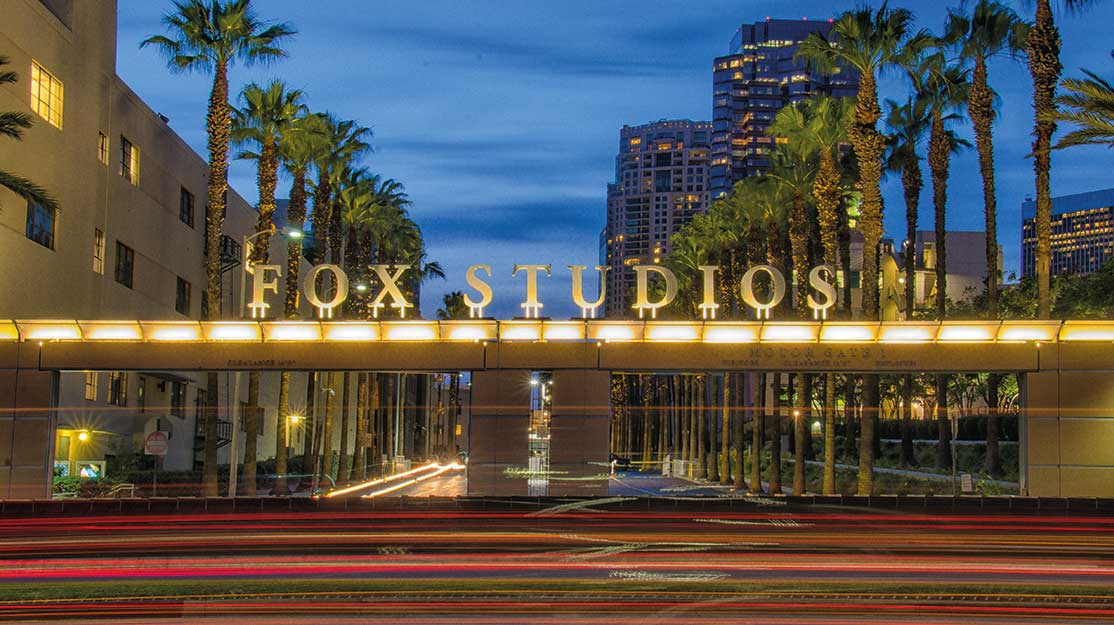 DQ enjoys a behind-the-scenes tour at the normally-closed-to-the-public Fox Studios in LA, which has been home to hits including The X-Files, NYPD Blue and House.

While visitors to LA can enjoy tours around the backlots of Warner Bros, Universal, Sony and Paramount, one US studio keeps its doors closed to the public. Yet it’s on a typically sunny May day that DQ has talked its way into a behind-the-scenes look at one of the most prolific film and television production companies in the world.

The origins of 20th Century Fox, as it is known today, can be traced back to the Fox Film Corporation, founded by William Fox in 1915. Originally based in Hollywood, Fox began construction of a sprawling studio lot in west LA in 1927, and today Fox Studios is known as the home of classic television series including The X-Files, Bones, House, LA Law, M*A*S*H and many more shows and films.

Our tour begins on the fifth floor of building 99, where boxes of clothes labelled AHS6 (American Horror Story season six) give a clue as to what goes on here. A side room displays Rose’s costume from Titanic, Edward Scissorhands’ iconic black suit and Mrs Doubtfire’s cardigan.

This is the wardrobe department, where clothing rails three rows high to the ceiling fill every available inch of floor space, jam-packed with items categorised by genre, colour and size, all with neatly labelled brown tags. There are countless boxes of hats and shoes, with more hats on the walls. One rack is full of 1980s fashion clearly reserved for The Assassination of Gianni Versace: American Crime Story, which is currently in production on the lot.

“Once you see the department, it’s pretty impressive,” says wardrobe department head Vicki Snow. “We have about six miles of pipe with clothing on it, all organised by category, size and colour. It’s kind of like a library. The shows come in, they see what they want, they pull it, we write it up and they take it out. At the end, they bring it back, we check it in, we put it back on the pipe. So it’s a constant turnover.”

Things are especially busy at this time of year, as recently cancelled series (including Rosewood and Scream Queens) are returning items, while new shows recently ordered to series prepare to begin shooting. “There isn’t a hiatus season any more, we’re shooting shows all year long,” Snow notes. “It used to be that May and June were our catch-up time, so now we just sneak in and catch up whenever we can. But we’re going to be busy just with processing for the next six weeks easily.”

Not all studios have on-site costume departments – Fox even closed its own unit down in the late 1970s before reopening it – so it’s a particular advantage for the individual series’ costume designers and supervisors as shows enter production.

“Once they determine the kind of look they’re going for – Are there a lot of courtroom scenes? Do they need a lot of suits? Are there ballroom scenes? – they will come in and pull each category of clothing for the background [actors],” says Snow, who has worked on classic films Grease, Airplane and the Die Hard series. “Usually they’ll go out and shop for the principal actors – shop or make it [the department has its own workroom]. But if you want John Travolta to have a really cool, aged jean jacket, you’d come in here and see what kind of jean jackets we have because then you don’t have to go through the hassle of buying it and trying to make it look old, because we already have it, probably.”

Outside of the costume department and touring the lot in a golf cart, Hollywood history is everywhere you look as we speed along the myriad avenues (named A-G) and streets (one to 10). There are gold plaques outside each sound stage along with signs listing notable productions filmed there, while other buildings include writers offices and those that were once dressing rooms for Frank Sinatra and Marilyn Monroe (now used by the domestic distribution team). Murals depicting classic movies such as Young Frankenstein, The Seven Year Itch and Star Wars are painted on the sides of the huge sound stages around the lot.

“A long time ago, this used to be 264 acres; we’re now only 52,” says stage manager Debbie Stone. “They started selling off parcels of land to fund different projects, one of them being Cleopatra, because it went so way over-budget. Then they built up Century City [the area of LA surrounding the studio].”

Traversing the lot, Stone points out where Shirley Temple went to school (building 80). The magnificent Avenue of the Palms has immaculate palm trees standing shoulder to shoulder on both sides of this main thoroughfare, while another notable landmark is a reflecting pond, once belonging to legendary producer Darryl Zanuck but only recently rediscovered when, eight years ago, a trailer was removed and the pond was found below.

Compared with other film studios, Fox’s backlot is relatively small but no less astonishing. The facades that make up New York Street were originally built for Hello, Dolly! and were later redecorated for NYPD Blue, which contracted the sets for 12 years. More recently it was used for Fox series Bones and FX’s Feud: Betty & Joan.

On the south-eastern side of the studio lot, building 103 is home to many of the executives who work for 20th Century Fox Television. Among them is Mike Posey, VP of production, who this season is overseeing Star season two, new X-Men drama The Gifted and pilot The Passage, which was filmed in June.

He’s one of four production executives who handle up to 30 network series, taking them from development through to the pilot stage and into full production, mapping out the budget and considerations such as filming locations. Bar the cast and directors, they also hire everyone working on the show, from the line producer and department heads to costume and production designers. “Every day there’s a million fires that happen, there’s some issue with the budget or location, so we’re dealing with that stuff on a daily basis,” he says.

Part of the problem is the fervent competition among US broadcast networks to bag the best talent for their new pilots each spring, and though more shows are now being developed off-cycle or going straight-to-series, Posey doesn’t see the annual race to the Upfronts – when the networks unveil their new schedules to advertisers each May – changing any time soon.

“The way that pilot season is set up means everyone is competing for the same people at the same time,” he explains. “You’ve got a window of three or four months when 100 pilots are being produced at any given point and they’re all trying to be done at the same time. So how do you get the best crew, the best cast, the best directors and the best writers when everybody’s going at the same time? These shows are also getting bigger and bigger. They’re not getting smaller. So you have these huge visual effects, high-concept shows that have less and less time [to be made]. But that’s just the way the business is. Everybody would like to have more time.”

So would DQ, as our tour comes to an end back where we started, in the shadow of the nearby Fox Plaza, the 35-storey tower that doubled for Nakatomi Plaza in Die Hard. There’s always a special atmosphere on the ground at a film and television studio, particularly one with such a storied history as Fox. But while one would love to look behind every door, sometimes it’s better to leave some screen secrets left unknown.