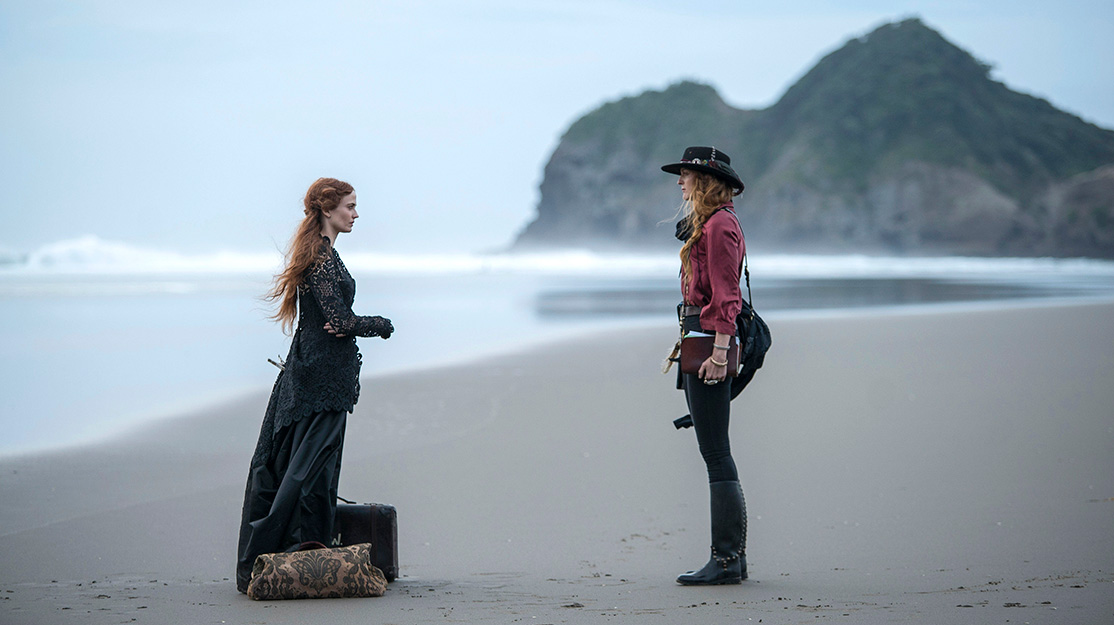 Eva Green, Eve Hewson and Himesh Patel speak to DQ about filming The Luminaries, a tale of love, murder, magic and revenge set in 1860s New Zealand at the height of the gold rush.

It’s a quirk of production schedules that the first scenes viewers see are sometimes the last to be filmed. Such was the case on luxurious BBC and NZTV period drama The Luminaries, but for co-stars Eve Hewson and Hamish Patel, it was a high-pressure situation.

The six-part series opens as Anna Wetherell, nearing the end of a voyage to start a new life in 1860s New Zealand, meets Emery Staines, who has plans to make his fortune during the country’s booming gold rush. There’s an instant connection between the two that informs the plot of the series, but if viewers didn’t buy their blossoming relationship, would they care what happened next?

When we first meet them, “they’re mysteries. We don’t know anything about them,” Hewson tells DQ of the show’s central pair. “But what’s important about that first scene is we don’t know anything about these people, but we know we want them to be together, just because there is something between them and it’s such a beautifully written scene. It was really fun to play and, oddly, it was the last scene we shot together.

“We did everything else and then the last thing we did was the scene where we met. Hopefully it works. The thing with Anna and Emery is they both feel like they know each other even though they’ve never met. And it’s that feeling that drives them to try to find each other again.”

Patel continues: “We were really banking on that scene working. We were saying ‘If it doesn’t work, why do we care about these two people getting together?’ We had to make sure that we got the chemistry right. And I think we did. I hope we did.”

Deceived and betrayed, Anna’s fortune begins to fall and she is drawn into a blackmail plot involving opium, gold, shipwreck, fraud and false identity, which leaves her accused of murder and fighting for her life.

But Anna and Emery are ‘astral twins,’ which means they were born at exactly the same time and ultimately share a single destiny. When Emery disappears, Anna is left without an alibi for a murder she did not commit and the noose begins to tighten around her neck.

Produced by Working Title Television and Southern Light Films for BBC1 in the UK, in association with TVNZ, distributor Fremantle and Silver Reel, the cast is led by Eve Hewson (The Knick) as Anna, Himesh Patel (Yesterday) as Emery and Eva Green as Lydia. The series is written by Eleanor Catton, based on her own Booker Prize-winning novel, with Claire McCarthy directing.

After disembarking from the ship that brings her to New Zealand, Anna reveals her intentions to find gold and make her own fortune, although it’s clear there are other reasons behind her round-the-world journey to start a new life. “I really don’t think she’s as naive as you might think,” Hewson says. “I think she was running from something in England and she wanted to escape or start a new life, or run away. The idea of a young woman getting on a ship was a big deal back then so you’d have to have a very good reason why you’d leave, because you probably would never go back home. There’s a lot of things going on with her backstory that’s not what it seems in the show.”

Similarly, Emery’s naïvety sees him used by his new ‘friends’ and his own ambitions immediately sidetracked by his attraction to Anna. “He is letting his heart lead him because he has a really romantic drive that is quite stubborn,” Patel explains. “That’s what he’s desperately trying to hold on to, even though he’s getting tossed about by the waves, sometimes literally. I hope people enjoy how the story unfolds because he is tested quite a lot, as all the characters are. But he’s got a resolve and a romantic outlook that is so at odds with everything that happens in the story and that happens to him. It’s about whether he can hold on to that belief.”

Known for television roles in Penny Dreadful and Camelot, Green tells DQ she likes playing multi-dimensional characters, “usually strong women,” where first appearances can hide secrets or cracks underneath their facades. Lydia, whose very job is a performance, fits the bill perfectly.

“She’s such a very strong, ballsy character, very driven, very daring, and she’s a lot of fun to play because she’s always game,” Green says. “It’s quite jubilating to play her. She’s also a feminist ahead of her time. She’s a very cool character. She’s quite like the baddie at the beginning but there are a few layers. And what brings humanity is actually her love for Francis Carver [played by Martin Csokas]. That actually redeems her. She’s not just the baddie.

“At first, Lydia’s intention is to use Anna. But Anna turns out to be a force to be reckoned with. Lydia vows revenge and Anna becomes her enemy. But it’s quite a complicated relationship between the two women because you really feel they could have been friends.”

Lydia’s love for Carver stands out, not least because he isn’t her husband, Crosbie Wells (Ewen Leslie). But maybe it’s all part of her game. “She’s completely blinded by her ambition and greed, doing anything to get her gold – and it’s not her gold, she stole it from her husband,” notes Green, who says she was reminded by her character of Lady Macbeth. “She’s quite a cuckoo in that way. But it’s such a tough world. She is a survivor. She feels there are no rules, she’s above the law and she can have whatever she desires no matter what the cost. She’s so driven and her hubristic nature will ultimately be her downfall.”

Catton says she spent five years writing The Luminaries and then seven years adapting it for the screen, revealing she had discarded more than 200 drafts of the first episode alone. Had she not done so, Anna might have been a minor character. But through that process, she became the audience’s perspective in this new world.

“Eleanor told me that once they decided they were going to go through Anna’s eyes everything kind of clicked into place,” Hewson says. “And when I read the script, I was like, ‘This is just fantastic.’”

“I read the script and then started reading the novel and was waiting for the two to converge at some point,” Patel adds. “But then as I got more of the scripts and realised the way Eleanor was adapting her own story, it was really fascinating and so brilliant. Eventually, fans of the novel will realise where our stories converge.”

The six-month shoot took place largely on a farm outside Auckland, on New Zealand’s North Island, where the frontier town of Hokitika was recreated in breathtaking 360º detail. Filming also took place on nearby Bethells Beach, and on South Island, where director McCarthy could capture its iconic scenery.

“We got to set on day one and it was like this town had been there the whole time,” Hewson recalls. “It was really amazing work from the production designers and I just loved getting to work every day. It was at the bottom of a hill. You could see the sea on one side and you could see Auckland in the distance. It just felt like we went down this hill in our own little time machine and got to live in that world.

“I felt like I was going back in time,” Green says. “We were in costume and it was actually very hot as well. It was very muddy, for real. We were back in Hokitika. We shot on the amazing Bethells Beach, with those caves. It was just amazing. That’s the luxury of being an actor, that you can discover amazing places. I feel blessed.”

Filming certainly took its toll on Hewson, who says her character goes to a “very dark place. It gets really messy and horrible what she goes through,” the actor says. “That was really challenging for me, just because there’s a lot of painful subject matter and physically it was very draining to be that emotional all the time. I remember just feeling exhausted. As an actor, you want to do those parts but it’s also hard to do them. You have to go home and watch an episode of Friends.”

At a time when the world is still battling the coronavirus pandemic, the trio says The Luminaries is perfect escapist television for viewers looking to get caught up in a love story and a murder mystery.

“It’s exotic and it’s quite unknown,” Green says of the world of The Luminaries. “But also it’s a very hard environment. To be a woman in that environment was extremely hard and you needed to be super strong.”

“I genuinely think we need great stories right now to take us out of the narrative that we’re living in for a minute,” Hewson adds. “I hope that people find it as compelling as I think it is.”