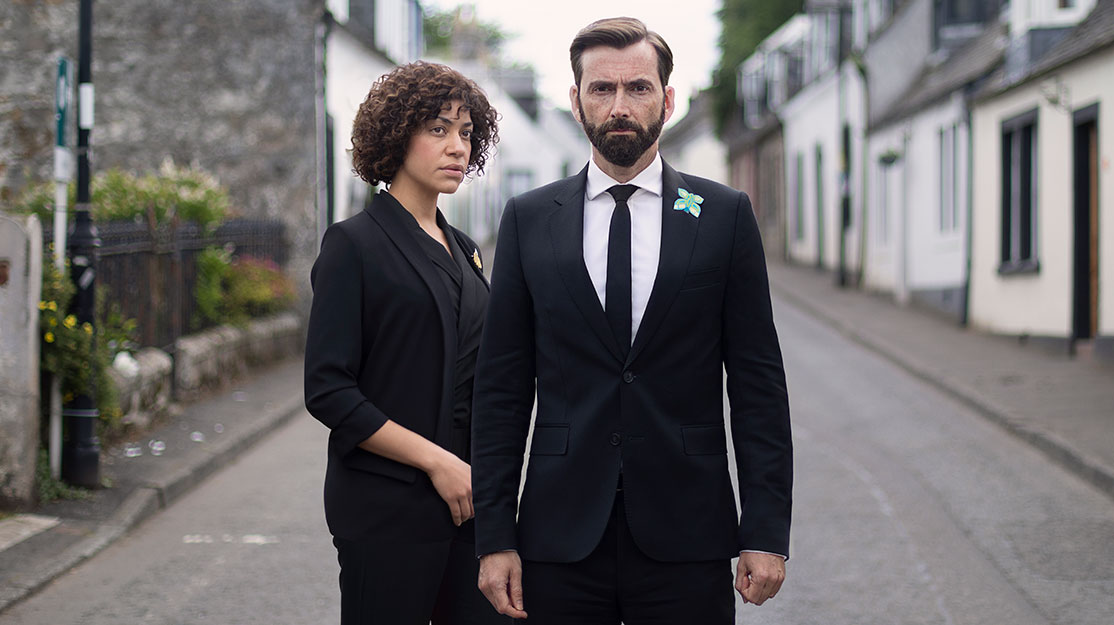 Life through a lens

After working on a pair of adaptations, writer Daisy Coulam is bringing an original story to television in the shape of Deadwater Fell. She tells DQ how a love of true crime shows and the power of social media inspired the series.

Screenwriter Daisy Coulam is perhaps best known as the head writer on ITV detective drama Grantchester, as well as being part of the writing team for Channel 4 sci-fi series Humans. But while Grantchester is based on James Runcie’s short stories and Humans was adapted from Swedish drama Real Humans, Coulam is now stepping out with her own original project – four-part crime drama Deadwater Fell.

Then there’s the Campbells, a more dysfunctional family made up of husband Steve (Matthew McNulty, Versailles), wife Jess (Cush Jumbo, The Good Fight) and Steve’s two sons from a previous marriage.

According to Coulam, the series aims to explore the modern-day, social media-inspired desire for the perfect life. “It’s an exploration of the way the world is now that we all seem to be living these perfect, Instagram-type lives. It’s seeing behind that veneer,” she says. “Tom Kendrick is a doctor and Kate is a teacher; they have the lovely house and all the trappings of a perfect life. But we quickly realise that, behind closed doors, things aren’t what they seem.”

It also examines the reasons why people commit certain crimes, through a “forensic examination seen through the eyes of the two couples,” making it more of a ‘whydunnit’ than a ‘whodunnit.’

The idea for the series came from an “obsession” with true crime, reveals Coulam, who admits she and exec producer Emma Kingsman-Lloyd are both addicted to murder documentaries like Making a Murderer and The Staircase. “It started from a love of true crime,” she says. “We wanted to tell a story in that very slow, forensic, visual style, and that’s where the idea originated from. Then we wanted to do something that exploded a community, that was quite big and dramatic and dark.”

To find the perfect crime, Coulam talked to criminal psychologists and people working in Scottish law and eventually found something that provided the themes she wanted to explore, namely toxic masculinity, relationships and coercive control.

Writing Deadwater Fell, which is produced by Kudos and distributed by Endemol Shine International, has been very different to writing Grantchester, Coulam says, not just because she now has a writing team alongside her for the latter but also because her latest series takes “a much more cinematic approach.”

“I try to think much more visually and to be much sparser with dialogue [on Deadwater Fell],” she says. “Funnily enough, Grantchester has quite similar themes in that it’s a ‘whydunnit’ and an exploration of what makes people do heinous things, but it’s a different approach. Grantchester is much more traditional and procedural, and we didn’t want to be police-heavy or procedural [in Deadwater Fell]. We wanted to explore it from the side of the community, friends and family.

“We see the crime in the present and we also see it in a flashback, so what we needed to do across the four episodes was storyline the whole thing and then piece it together. It’s almost like a jigsaw puzzle and each piece we’re laying out for the audience to see if they can piece it all together. There are two different timelines, so it was quite a different process [from writing for Grantchester]. We wanted to peel away the layers of the characters to really look at their motives and what triggers them to do what they do.

Coulam was also interested in how criminals and murderers are thought of as ‘monsters,’ whereas “actually, statistically, they’re [more likely to be] within a family or a community

and are somebody you know. So, another element of interest is that evil isn’t ‘something else,’ but human.”

When it comes to her writing process, Coulam sees advantages in working both alone and via a writers room, but admits writing Deadwater Fell on her own has had its difficult moments. “Writing solo, you can go crazy. I’ll sit here banging my head against the wall, but I am lucky that I’ve got Danny [West], the script editor, who I can phone up and rant at,” she says.

“I work very closely with Emma [Kingsman-Lloyd] and Danny. We have this understanding and can quite quickly piece together a story. So, we do work together, although this was purely my project. Writers rooms, by their nature, are much more collaborative. This is the first time I’ve really got to do my own project and that’s felt quite scary but also exciting.”

Coulam wrote the first season of Grantchester on her own, but for the past three seasons, plus the upcoming fifth season, she has had a team of writers alongside her, which she says provides a whole new dimension to the writing experience.

“With Grantchester, there’s a different kind of pleasure, which is that you’re part of a team. We’re really part of a family at Grantchester; we’ve been together so long now. So it’s fun in different ways.”

Coulam broke into screenwriting on continuing dramas such as the BBC’s EastEnders, Holby City and Casualty and also had a stint as a story/script editor on ITV’s The Bill. She believes these long-running shows provide excellent experience for budding writers, as well as those looking to work in producing or editing. “Continuing dramas are the best training grounds. A lot of people I work with now, including script editors and producers, have come up through that system. The turnaround is so quick, so you need to think on your feet and keep up the quality without slowing the pace. You also get to make mistakes and watch it back, so you can see your work, critique it and then learn from it,” she says.

Coulam made her way into the continuing drama space after earning a place on BBC training course the Writers’ Academy, which she credits for changing her life. The original programme ran from 2005 until 2013 and launched the careers of screenwriters including Rachel Flowerday and Tahsin Guner, the creators of crime drama Father Brown.

After a six-year hiatus, the scheme relaunched this year as the BBC Studios Writers’ Academy. Through the programme, eight successful applicants were picked to receive one year’s paid training with guaranteed commissions on major BBC shows, including Doctors and EastEnders.

“I’m really pleased the Writers’ Academy has come back,” Coulam says. “I did it around 11 years ago and, without a doubt, it changed my life. This year they’ve got seven women writers, which is really exciting. The Royal Court theatre in [London’s] Sloane Square also has some amazing schemes – the more of those, the better,” she adds, pointing out the opportunities they can also offer to budding writers from working-class backgrounds “who otherwise might get overlooked.”

So what advice does Coulam have for budding writers? “Watch other people’s telly,” she says. “There’s a good quote along the lines of, ‘If you don’t know what a good cake looks and tastes like, how do you know how to cook one?’ Watch other telly and think about why it’s good, but don’t compare yourself to others because somebody will always be doing better than you. Comparison is the thief of joy.”