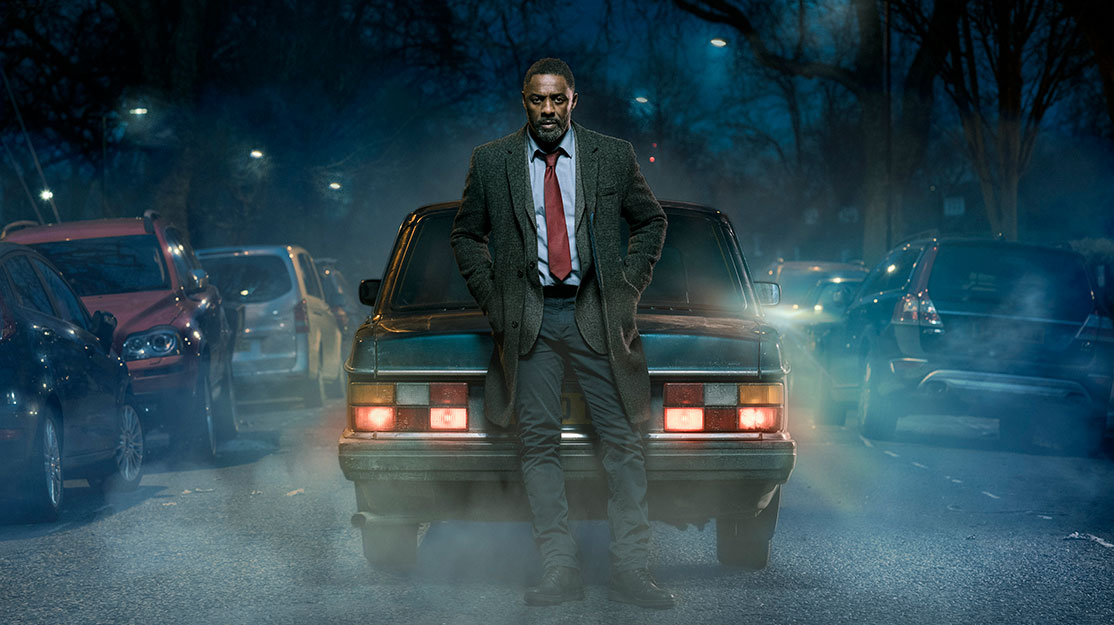 Idris Elba returns as iconic detective Luther for a fifth season of BBC1’s flagship crime drama. DQ visits the set to meet the cast and discover what new horrors writer Neil Cross has in store.

With so much of Luther set in and filmed around east London, the BBC1 crime drama has left an indelible mark on me. Not least because season two, first screened in the UK in 2011, saw a psychotic serial killer select his targets at random, leading to a particularly barbaric sequence involving multiple deaths in and around Liverpool Street train station and a final showdown in nearby Appold Street – my exact commute to the office. Walking to work has never been the same since.

Seven years later – and eight since Luther first aired – I’m standing on the office floor of the Metropolitan Police’s serious and serial crime unit where DCI John Luther, played by Idris Elba, and his team are getting their heads around another series of grisly murders.

Bafta-winning Wunmi Mosaku (Damilola, Our Loved Boy), who has joined the cast as Luther’s new partner DS Catherine Halliday, is standing in front of some large boards covered with maps and photos of locations, bloodied bodies and mugshots. Desks and computers fill the office, a drab space complemented by dark blue walls and matching carpet – standard police station decor.

Across the room, Dermot Crowley’s DSU Martin Shenk is watching her before approaching. “Isn’t it time you went home, Catherine?” he asks. Something’s not right, she says, and they leave together to see Luther.

“Cut,” calls director Jamie Payne, seated in front of a monitor around a corner from where the actors are stood. He resets the shot and, after another rehearsal, the scene is recorded to film. The cameras are then shifted, this time close up on Mosaku, and Payne is nodding his head along to the dialogue. When he’s happy, Payne shouts, “That’s the one.”

It’s a grey March day at a former telephone exchange in Watford, on the outskirts of north-west London, where the team behind Luther is hitting the final stretch of production on the series’ fifth season – a single story playing out across four episodes that will run on consecutive nights on BBC1 between January 1 and 4, 2019.

If viewers have come to expect anything from Luther, it’s a good fright, with notable scenes from previous seasons including a killer hiding under a bed. “I’m having nightmares,” admits Mosaku, with this season set to bring new horrors to the London night-bus experience. “There have been some dark scenes. There is one scene in episode one that gave me absolute chills reading it, so having to be on set with the aftermath, I was like, ‘This is exactly what I imagined and it’s just as harrowing.’”

Fast-tracked through the police, Halliday arrives as Luther’s latest partner. Mosaku says there’s warmth in their relationship, with some added spice to keep her on her toes.

“She trusts him. She looks up to him and thinks he’s brilliant,” says the actor, who first auditioned for the show way back in season one. “She will say, ‘Is this ethically correct?’ and he’ll say, ‘It’s legal.’ So she knows there’s a difference between their ethics. She does trust him, but she’s wary of the fact this isn’t necessarily what she would do or Schenk would do.”

This isn’t the first time Mosaku has portrayed a police officer, and being a fan of Luther and of writer Neil Cross meant she was keen to return to the beat to play Halliday. “She is sweet. She’s just not your typical cop. She’s smart and she’s good but there’s a lightness to her, and I feel like that’s a character I’ve not played much,” the actor explains. “Luther is a tough show but Halliday has a bounce in her step and everything she’s seeing is affecting her for the first time.”

But why does Luther, produced and distributed by BBC Studios, stand out among the crowd of crime dramas? “Number one, there’s a black British African man as the lead. When it first came out, I don’t think I’d ever seen that before. So when season one came out, that’s why I was watching it and I loved it,” Mosaku explains.

One character who has featured in every season since the beginning, playing an increasingly important role, is Benny Silver, Luther’s loyal, go-to computer mastermind, played by Michael Smiley.

“I love the fact Benny has, in increments, come more into the drama and storylines,” the actor says. “He was just a one-off character in a couple of scenes in the first season and was Luther’s hacker. Now he’s in the bullpen, he’s one of the main characters and in this season he features quite heavily, so it’s really exciting.”

Smiley describes Elba and Cross’s relationship as a “perfect storm” of brilliant acting and superb writing, and says Luther wouldn’t be the same show without its gruesome deaths and shocking scares. He promises more of the same in season five, likening the show to a gothic fable, but says it isn’t quite the same on set.

“When you’re on the inside, you don’t really see the scary parts,” he says. “What you see is the fake blood and you get to see how the art department works, which is really fantastic. I really enjoy watching people bring their A-game, because Luther’s one of the top British dramas and certainly a flagship drama for BBC1. The people who are on it are there because they’re the best in their trade, so watching those people is great.”

Back on set, the office is now busy with extras sitting at their desks. Two cast members walk out through double doors and in comes Luther, wearing his trademark coat, grey shirt and red tie, to meet Halliday and Schenk. Only it’s not Elba, it’s his body double.

A couple of weeks later, Elba himself joins us at the Langham Hotel, opposite BBC Broadcasting House in central London. And while much of the season’s plot is under wraps, what has been revealed is that, as a series of monstrous killings becomes increasingly audacious, Luther and Halliday are confounded by a tangle of leads and misdirection that seems designed to protect an unspeakable horror.

But as the case brings him closer than ever to the nature of true evil, a reluctant Luther must also face the ghosts of his own past.

Following the success of previous seasons, Elba says the challenge this time around is not to beat previous efforts but match the things the audience find compelling and then make them more complex.

“The comforting thing about Luther from season one to season two is the DNA doesn’t change,” he says. “You see the murder, you even know who it is or you see the clues, and then you watch John go for it – and I don’t think we’ve ever tried to deviate from that. But each time, we’ve made it slightly more complex, which means we start to dissect his timelines.

“This one is the most complex; there are so many things going on. And the great thing about Neil is he’s a great writer. Of course, we want complex storylines, but how does it make it still compelling? How do we fit it into an hour? How do we do it over four episodes and not exhaust the audience? That’s what I think Neil has done a really incredible job of this year.”

The actor admits to going to great lengths to make Luther compelling and dark. “That means for us as a film crew, we film at night, we spend lots of time in the cold, we kill a lot of people and we all watch that and all go, ‘Jesus Christ, what are we doing?’ Then we go home, we dream about it and come back the next day,” he says. “In my first season, I used to spend a lot of time in the bars, straightaway after work, me and the cast, and now I don’t do that. I’ve grown older but I do have to have some sort of therapeutic outlet, which tends to be music for me – making music. When you do Luther in the winter months for 10 or 12 weeks, it’s a dark time.”

Elba is also heavily involved off screen, having first been an associate producer to ensure he had a voice behind the scenes. “We were quite heavily criticised in the early stages that female characters were always the first to go. Having a voice under a producer’s title allowed me to implement some thoughts and bring in teams that helped change some things a little bit,” he says.

Now an executive producer, he was part of the early team that met Payne and consulted with Cross and the department heads about the direction of this season. “This one’s very particular because I think it’s one of our last TV instalments – I shouldn’t say that as a matter of fact, but it was designed in the sense that Neil’s and my ambition is to take it to a larger screen,” he reveals. “We paid attention to what we were writing in this show. If we are to make a movie, this show is essentially a segue to that.”

For now, season five boasts a new character in Halliday, who challenges Luther more than most of his other partners. “He has a sense of protection [over her] because she’s a black female detective and he wants her to climb [up the ranks],” he adds. “But of course things happen within the show. It’s quite a compelling storyline.”

Elba likens Luther’s London to Batman’s Gotham City, a place where societal issues can be transposed onto a unique setting. Crowley, as Luther’s boss Schenk, agrees that the location is another character in the drama, adding to the foreboding and uneasy atmosphere that runs through the series.

“It’s a very frightening programme to be in,” he says. “It feels uber-real when you’re making it because I suppose it has to. This is definitely the scariest yet.”

Since the start of the show, Schenk has evolved from essentially Luther’s bureaucratic nemesis to a character who admires the detective and is equally willing to play with morality and the law to get the job done.

“He always acts with an admiration for Luther because he thinks he’s an extraordinary copper and he does things where Schenk doesn’t himself have that particular skill or facility,” Crowley says. “But at the same time, I think Schenk is very puritanical about himself and the police and morality generally. He always gives Luther enough leeway to act but, at the same time, in an almost paternal way, he keeps an eye on him as well.”

The Irish actor praises Cross’s scripts as being “raw, exciting. His use of language is excellent.” He continues: “When you get a Neil script, the words come off the page. They always sound like you’re saying them for the first time, which is the secret of good writing. They don’t sound stagey.

“He’s got great balls as a writer. He’s not afraid to suddenly give an actor an aria, a 10-page speech, and there’s always something underneath it that pushes the story forward.”

With all the excitement surrounding the return of Luther, plus its international popularity thanks to its availability on Netflix, a big-screen outing seems inevitable for Elba and this larger-than-life character. One can only imagine what horrors he and Cross will dream up next.