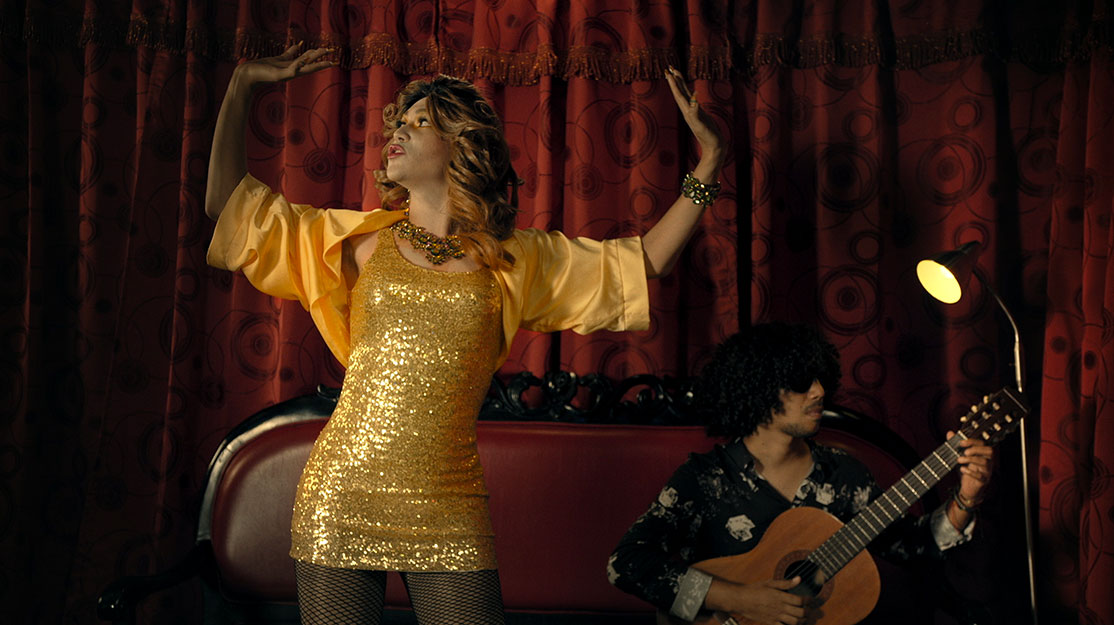 Colombian filmmaker David David introduces his series Vida de colores (Colourful Life) and talks about diversity in storytelling, his move into television and infusing the story with the sounds and colours of the Caribbean.

Set in the heart of a region known as the Colombian Caribbean, Vida de colores (Colourful Life) tells the story of Yerit, a non-binary artist who lives with Alma, a trans woman who has acted as his mother for the past five years.

When Alma is brutally attacked, Yerit’s strength is pushed to the test as he fights to preserve the family he found in her.

Launching in Colombia on Canal Telecaribe in June, the series comes from filmmaker David David (La Frontera), who created and directed the series and wrote it alongside Alejandro Gómez. It is produced and distributed by Garabato Cine.

As the show enjoys its international premiere at French Television festival Series Mania, David speaks to DQ about its origins, diversity in storytelling and the importance of Vida de colores’ music and dance sequences.

What are the origins of Vida de colores?
Vida de colores is a celebration of life and diversity at every level. This is a miniseries project that was born, made possible and shot in the middle of the Covid-19 pandemic, during a time when I felt quite frustrated as a writer. I was promoting my first feature film, La frontera, which I had the chance to premiere in the international competition at the Cairo Film Festival, but when I found the moment to premiere it in Colombia, the pandemic started and we needed to isolate.
For a few weeks, I focused on the negative aspects of what was happening until I had the opportunity to learn the story of Alejandra Monocuco, a trans woman who died of Covid. The doctors allegedly didn’t treat her because she was a prostitute, black and an HIV carrier. She had many so-called social stigmas. I felt shocked. To me, if there comes a point where the essential aspects of our life define us, they should do so in a positive way, as a celebration of difference, not in negative terms as we are used to. I began to build a story from there, to celebrate diversity.

Tell us about the main character, Yerit.
Having laid the foundations for the character of the trans woman, I began the process of adapting the story to a context I fully knew. I wasn’t familiar with stories about the trans community, but I knew a lot about being an artist in a very conservative place where you need to deal with preconceptions.
I came up with the character of a young artist who wants to express himself through arts, with zero limitations. That young artist was once me, when I decided to dedicate my life to arts in a family that traditionally saw arts as a hobby, as a distraction, not as a profession – so Yerit was born, and he stopped looking like me but kept the same concerns. He is a free, non-binary soul, living in a [rigid] society.
He wants to fulfil his dreams, which are very similar to everyone’s: to get a job, earn money, live with dignity and live peacefully with his family. Amid this situation, he deviates due to circumstances that hurt him and the person he loves the most. Yerit faces a journey  that will allow him to show that his worth lies beyond his gender status.

What themes did you want to discuss?
With the title, I wanted to give an invitation to broaden perspectives not only in terms of gender diversity but diversity of race, opinions, political ideologies and religion. When we judge another person for being different, we are trying hard to stay in control of the situation. We need ‘right’ or ‘truth’ to be like us, so we claim different to be wrong and we ultimately turn our reality into a bunch of absolute truths.
That doesn’t make sense to me. It’s harmful. We become slaves to our vision. Once we get to understand that we are one of the many species that live in this world, we’ll live better. Like birds – they represent such a colourful and varied world, full of textures, sizes and shapes, and their main value relies on diversity. We should truly embrace that idea. That was my primary subject to address.
There is an additional theme that has been present in all my films so far – the construction of families. Due to the ways families are portrayed sometimes, we tend to refuse the non-traditional families built through ties of love. Blood isn’t always the bond. The answer to this question is more complex, though, because there are many things I am discovering about myself thanks to the feedback the audience is giving me. I’m under construction.

How did you write the series with Alejandro Gómez?
As I live in a city with no academy nor industry for cinema, I have learned to make my projects possible, step by step. Before this, I not only wrote my works but also directed, produced and edited them. I have been quite involved in the entire production process, but this was a new challenge in many ways, so I understood I needed to turn the writing process into a collaboration.
I met Alejandro when we did a master’s degree on film directing in Barcelona. We met again recently, and I asked him to be a part of the series. Out of the six episodes, I wrote the plots and the entire scripts for five of them and co-wrote another one with him. It was an enriching process and I felt like I opened a door to a process of collective creation I hope to be able to enhance in the future.

What visual style did you want for the series and how did you achieve this?
There were two essentials: I like my stories to be character-driven and I like to have a realistic, naturalistic approach to the narrative. For this, I worked hand-in-hand with my team. I am from Barranquilla, a city where one of the most famous carnivals in the world takes place. There is a huge imagery of tradition and colours that I wanted to include in the story through dance and music, in the Caribbean style.
I also went through a research process while I was writing. From there, I included some popular elements – the Farotas dance, for example. This is a traditional indigenous dance where some men dressed as women to deceive and defeat the Spanish colonisers who wanted to rape women. Tradition mixes with culture, dance and creativity for a liberation process and the restoration of dignity. I loved it when I made this connection because Yerit was going down the same path, as an artist, taking advantage of dance to free himself from his problems.

How do you use music and dance scenes in the show?
I feel like our generation is highly skewed by a dominant musical genre, reggaeton. I wanted to pay tribute to many genres I fell in love with during my childhood in the 1990s. There was salsa, cumbia, merengue, champeta – many genres that were also very Caribbean and representative of the diversity of colours I wanted to highlight within the story.
From the writing process, I programmed myself to put at least one musical dance number in every episode so these Caribbean traditions could be unleashed as a celebration of our roots. We are a mixture of the Indigenous, the Spaniard and the African, and it feels like music and dance are a great way to celebrate that.

How do you like to work with the actors on set?
While I am writing, I try to put the least amount of description on what a character should be, so the actors don’t feel they lack any essential element for their work. I unveil characters through their actions, not their appearance. During the casting process, I try to stay open to all possibilities. Yerit could have been tall or short, thin or thick, and this shouldn’t stop him from being a young dancer and artist. There are many aspects that can make an actor suitable for a character, and as a writer I am open to discovering some of them during the development process.
Another important aspect is writing the dialogue. I love listening to conversations more than speaking, and this helps me to write realistic lines. In rehearsals, I make sure that the actors feel connected to what they are saying, and I give them the power to tell me when they don’t feel it’s natural. If we find better ways to make people connect to the story, I am open to that.
Once these two aspects are aligned, the work on the set is much more profitable because it becomes a journey of joint exploration where we all have fun.

How would you compare Vida de colores to your previous work?
I need to go to a therapist to answer that question! Based on what I can comprehend, I enjoy talking about characters who are in the search of a family, who are in exile, who were expelled from somewhere and seek to belong to the place they inhabit. It is something quite complex that I want to understand better.
I also like to tell stories about human relationships that transcend labels and tradition; relationships that don’t depend on conventional blood ties. I feel like families and fraternal relationships go beyond that, and once we get to realise that, we’ll be able to connect much better with our peers.

Why do you think Yerit’s story will resonate with viewers around the world?
Mainly because his needs are identical to everyone’s needs: he struggles to have a job, to earn money, to be a good friend, to carry out a profession and everything amid adverse circumstances. Regardless of the context we live in, we all can relate to people with the same needs.
I also believe we can learn something very important about Yerit and his ability to find something he likes so much like dancing, and use it as an instrument to free himself. Yerit expels bad energy through dancing. Vibes that another person could turn into dark emotions, he transforms into something positive to move on.

How is Vida de colores an example of drama being produced in Colombia?
I recognise the people we see in the series. They are close to me. We are not creating a new world but we are somehow changing the perspective, focusing on the amazing aspects that rely on family bonding and love.
Most of the dramas produced in Colombia tend to correspond to the exotic ideas that others have about us: drug trafficking, prostitution or misery. Some think about us that way, and others deliver. It’s a huge mistake to fall into that circle. Vida de colores has been an opportunity for me to realise there is a huge set of new possible approaches we can take, with life stories that deserve to be told.