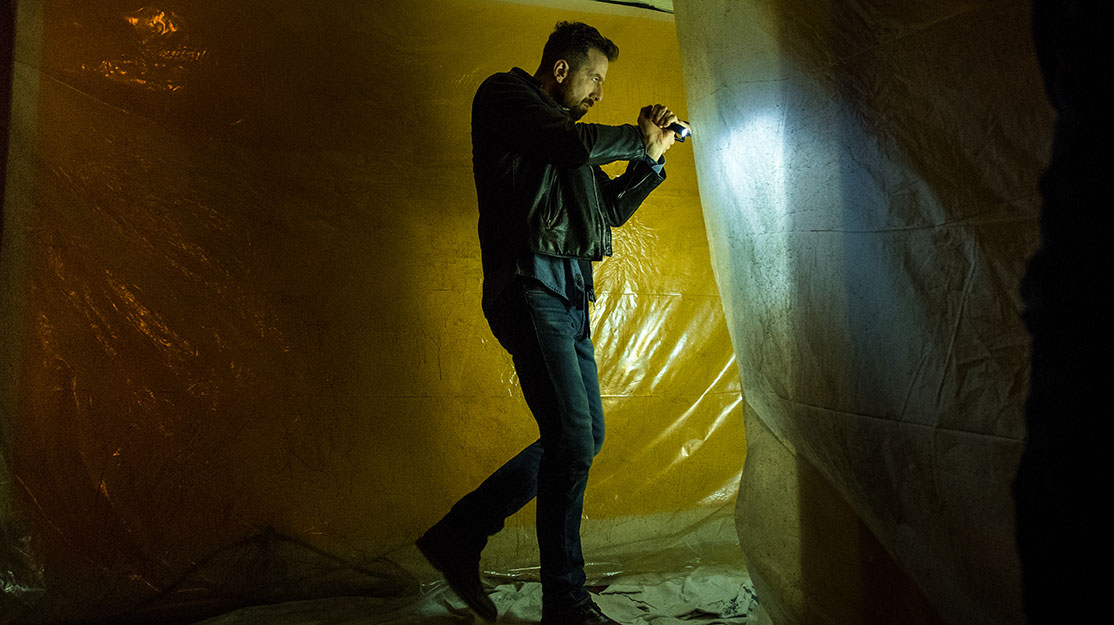 When an author is labelled “Master of the Quebec thriller,” it’s only a matter of time before their novels will be remade for the screen. So it proved for Martin Michaud, who worked alongside Montreal-based producer Pixcom to adapt his own Victor Lessard novels for SVoD platform Club Illico.

Season one of the French-langue series, called Victor Lessard, debuted in March this year, with a second season ordered the following month. Production is now underway on another 10 episodes of the serialised crime drama to air next spring.

The first season introduces Detective Sergeant Lessard, a senior investigator with the SPVM (Montreal Police Service)’s Major Crimes Section, who leads his partner Jacinthe Taillon and young officer Loïc Blouin-Dubois in investigating the deaths of a man and a woman who appear to have been killed using a medieval torture instrument. Furthermore, it’s revealed to viewers that, moments before their deaths, the pair hears the voice of Lee Harvey Oswald, the man believed to have killed John F Kennedy.

The debut season was based on Je Me Souviens, the third book of four in the Lessard series. Season two is set to take its lead from the fourth book, Violence à l’origine, in which Lessard and Taillon must unravel clues left in graffiti to solve the gruesome murder of a senior police office from Montreal, whose severed head is found in a garbage can.

Nicola Merola, Pixcom president and executive producer, first broached the idea of adapting the Lessard novels when he sat down for lunch with Michaud. Less than a month later, Club Illico agreed to finance the development and subsequently ordered a full season on the back of the first few scripts.

Patrice Robitaille and Julie Le Breton star as Lessard and Taillon respectively, and Merola says they were purposely cast against type.

“We chose two stars who were not known for the type of characters that were developed in this series so it was a beautiful shock for the audience,” he recalls. “But it was a massive hit. In two weeks, we had a million views. French Canada has a population of not even six million, so it was a huge hit. Right away they ordered a second season.”

Merola describes Lessard as a character with a very dark past, who uses his connections on the wrong side of the law to help him solve murders and put killers behind bars – yet his background means he also has a certain empathy for them.

“He knows they’re bad guys and have to be in prison but in many ways he understands them,” he explains. “He’s not on the dark side but he’s always very close to that world.

“When he was a kid, he came home after school and saw his brother and his mother killed, lying in an ocean of blood, and his dad holding a gun. So from that moment, his life was fucked. He went from one orphanage to another. His childhood went from bad to worse but he always kept some good inside him, so he uses that to put the bad guys away. But he also uses his dark past to connect with those murders and that helps them find the bad guys.”

Part of the charm of the series is the central double act of Lessard and Taillon, who supports her partner emotionally and professionally. “She’s not a guardian angel but she checks on him from time to time,” Merola says. “Loic is also a good man but he is used by their boss as a spy to find the failure in Victor’s life, which he hopes to exploit and take his badge and his gun.”

From the beginning of development, Michaud was keen to write the series himself, despite never having written a screenplay before. Therefore he was partnered with co-writers Frédéric Ouellet and Michelle Allen to plot out the story arcs, while script editor Myrianne Pavlovic was also on board as content producer. Ouellet also co-writes season two.

“From the book to the series arc, Michelle was involved and she wrote the first episode and then Martin got it, so he could go on and write the rest,” Merola says. “He wrote four episodes of season one and Frédéric wrote the rest. We’ve created a very strong TV writer [in Michaud]. It’s a beautiful achievement. We thought from the start it was the best way to do it and we thought it was better to ‘fight’ with Martin about some of the stuff in the adaptation [than not have him involved at all]. We thought the series would be much stronger by doing it that way.

“When you write a book by yourself, there’s no budge. You can use helicopters, bombs, anything you want. But there are elements that are very important for Martin in his book that need to be totally dropped when you come to the script. So it was hard for him in the beginning to let go of things. But week after week he would trust the team more and let go of things.”

To use a familiar cliché, the city of Montreal serves as more than just a setting in the series, becoming a character in its own right. But Merola says the creative team, which includes director Patrice Sauvé and producer Mario Clément, was keen to show it in a new light.

“It’s very dark; we go through the darkest places of the city and its inhabitants but we do it with those two detectives who have an enormous need for good and for bringing the light into those dark places,” he says. “The investigation itself [in season one] deals with people who are avenging their past, using medieval torture tools. It’s really twisted, but at the same time there are many light moments.

“We wanted to show the city as we know it and as we don’t know it – drone shots over some of Montreal’s landmarks are phenomenal. During the production, we realised we needed to put more money in because if we wanted those sorts of results with the lighting at night, we needed to put some more dollars in. And the network agreed – which has never happened to me in 20 years in television.”

The original production wasn’t without its casualties, however, as Merola reveals Sauvé caught pneumonia at the end of the shoot. “He gave his soul and part of his health to make it happen,” he says. “Without Patrice, we would never have a show that looks and feels so good.”

The series also had to walk the tightrope between SVoD platform and linear television, as Victor Lessard was commissioned by Club Illico but with the long-term intention to air it on sister terrestrial channel TVA.

“So in terms of violence and sex, we had to balance it,” Merola reveals. “If we had done it just for Club Illico, we would have pushed it even more in that direction but because it’s a show that at some point will end up on TVA, we needed to take that into consideration. We were producing a show for two networks, which happens internationally. It’s really fun to produce a series for an SVoD firm. Those guys are very smart at Club Illico, they know their audience extremely well, so that helped.”

Victor Lessard is part of a new wave of crime series that includes dramas like Bosch, The Fall and The Killing – shows that spend just as much time developing the characters solving the crimes as the crimes themselves. But while the relatively small budget meant many of the action scenes described in Michaud’s novels couldn’t be translated for the screen, something that was there from the beginning was the emotional core of the series.

“There’s always emotion in every show we do,” Merola adds, noting that there is a lot of international interest in acquiring and remaking the series, which ZDF Enterprises distributes. “We believed so much in that IP that we decided we should bring it to the international market, and the reaction is unbelievable. The books are extremely story-orientated and that’s how we grab the audience with the budget we have, which doesn’t allow for a fast-paced, action-driven series.”

With two more books in print and the original creator on board the television series, Victor Lessard could be the next literary detective to find a long life on the screen. Whether he travels the world in the guise of Patrice Robitaille or with a new identity as part of an English-language remake remains to be seen.