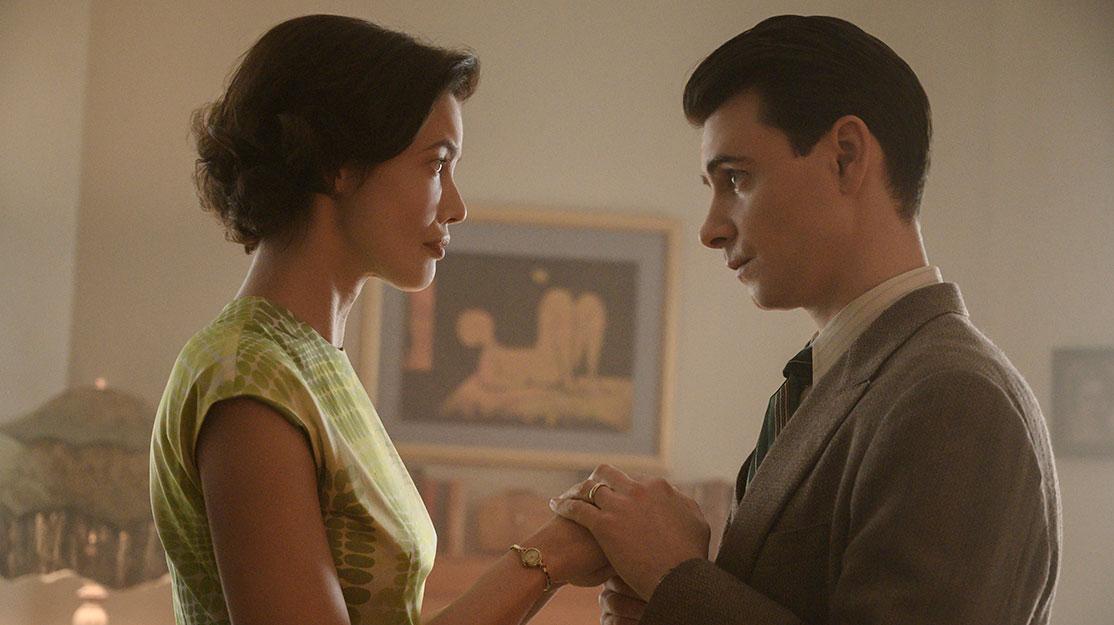 Mr Robot star Stephanie Corneliussen joins the cast for the third and final season of X-Men drama Legion. She talks to DQ about Noah Hawley’s psychedelic FX series, its treatment of mental illness and her extensive preparation for playing Gabrielle Haller.

When the news came, it arrived via Twitter. “Noah Hawley is pleased to announce two guest castings for the final year of #LegionFX,” the message on FX drama Legion’s official account read. “Stephanie Corneliussen will play David Haller’s mother, Gabrielle, and Harry Lloyd will play his father, Professor X.”

You can imagine why fans of the series went crazy. The show is based on the X-Men comics and characters that have spawned a number of action-packed feature films, with Professor X (Charles Xavier) – played invariably by Sir Patrick Stewart or James McAvoy – among the ensemble cast of characters brought together on the big screen. In the movies and the original comics, he is an extremely powerful telepath and the founder and leader of the X-Men, a band of humans born with mutant powers in a world rife with anti-mutant sentiment.

In the comics, he falls in love with Gabrielle Haller but they later separate without him knowing she is pregnant with his son, David, who becomes the mutant Legion, suffering from schizophrenia, multiple personality disorder and powers similar to his father’s.

For two seasons, Legion followed David’s struggle to understand his abilities as viewers followed his story through the character’s own distorted perspective, set in a hallucinogenic world created by showrunner Noah Hawley (Fargo) and taking its vibe from the 1960s and 1970s.

From childhood, David (Downton Abbey’s Dan Stevens) shuffled from one psychiatric institution to the next until, in his early 30s, he met and fell in love with a beautiful and troubled fellow patient named Syd Barrett (Rachel Keller). After Syd and David shared a startling encounter, he was forced to confront the shocking reality that the voices he hears and the visions he sees are actually real.

With the help of Syd and a team of specialists who also possess extraordinary gifts, he unlocked a deeply suppressed truth: he had been haunted his entire life by a malevolent creature known as The Shadow King, who appeared in the form of David’s friend Lenny Busker (Aubrey Plaza), but was actually an ancient being named Amahl Farouk (Navid Negahban).

During an epic showdown, David managed to push Farouk out of his body and gain control of his mind. But with Farouk on the loose, the team formed an unlikely alliance with their former enemy, Clark DeBussy (Hamish Linklater), and his well-funded government organisation, Division 3. Unfortunately, the hunt for Farouk reawakened the dark voices in David’s head, and within them, a lust for power.

At odds with everyone he once considered a friend, and Syd tasked with bringing him down before he destroys the world, the third and final season sees David enlist the help of a young mutant named Switch (Lauren Tsai), whose secret ability is key to his plans to repair the damaged he caused.

That’s where Professor X and Gabrielle come in, as David meets them in some time-travelling twists that are entirely suited to the show’s mind-bending, distorted structure.

“There was a lot of excitement when Legion had found its Professor X, because he’s such a prominent character in the comic books. Gabrielle perhaps didn’t attract the same attention – but she will,” Corneliussen tells DQ. “Noah really did something quite amazing with this character. We had a lot of talks about her and how to shape her.”

Hawley has spoken in the past about how Legion is a study of mental illness, as David recovers from being at his lowest ebb, only to spiral into darkness once again. Season three will complete his story, which is one Gabrielle can also relate to as the character also suffers from mental health issues.

As an actor, Corneliussen has embraced the role of Gabrielle and put particular emphasis in her preparation on how her character is affected by her health.

“All roles deserve serious preparation but when you prepare for a role that has to do with a sensitive subject like this, it really deserves a certain level of respect,” she says. “It deserves due diligence and proper research, and because I am so fascinated by that within humans, our mind, I like portraying these characters to end the stigma around mental illness.”

The subject is a familiar one for the actor. In USA Network drama Mr Robot, Corneliussen played Joanna Wellick, a character who also had mental health issues.

“She had an anti-social personality and was living in this very controlled mania where she thought she could control people with taunts and that ultimately became her demise,” she says of the character, who she played across three seasons of the series. “She was living in a very happy symbiosis with her diagnosis, whereas Gabrielle is living in a very different reality and with a different relationship with her own mental struggles, in the form of depression, anxiety and trauma.

“It’s something I thought was very relevant, not only to what is going on in the world but also to myself in my late 20s, early 30s, when I started experiencing depression and anxiety. We just don’t talk about [our mental health] so it’s important to have shows like Legion that shine a focus on it.”

In particular, the actor says Gabrielle is still affected by postpartum issues that stem back to David’s birth. As she’s not a mother herself, Corneliussen spoke online with people who had first-hand experience of similar problems to round out her understanding of the character and her performance on screen.

Corneliussen is reluctant to say too much about Gabrielle’s arc in the series, only that she does appear in sequences that result from David playing with time. “My family were very confused when I said I was playing Dan Stevens’ mother,” she jokes. “We do travel back in time and there are a lot of things that Noah tapped into that are integral to the comic book story of Gabrielle.

“I don’t think I’ve ever met one person who has lived their life without regret, and it’s OK to regret choices that you’ve made. But it’s an issue when you start criminalising past choices and start beating yourself up about it. That’s when you can’t move on. But imagine having the opportunity to change it. That’s as vague as I can be!”

Corneliussen had the chance to audition for Legion when her manager spotted a casting call for a guest spot on the series, which comes from FX Productions and Marvel Television and is distributed by Fox Networks Group Content Distribution. The Danish actor and model was in Copenhagen at the time, so she filmed an audition on her iPhone and sent it off.

“I don’t think I’ve ever been more excited to go to work than I have been on Legion,” she admits. “The crew were fantastic but with the cast in particular, who have been together for these years, I’ve never felt more welcome or more as an equal. Lauren Tsai, who joins in season three as well, and I were both newcomers, but we were so welcomed and there was no difference in how people were relating to us. We were invited to join and partake in everything. It was pretty beautiful. Amber Midthunder and Rachel Keller, in particular, were just really wonderful. It’s been an amazing experience.”

Season three was filmed on stage at Paramount Studios and on location around LA. Corneliussen says she was surprised how much the series relied on physical effects and an exemplary team of stunt performers, rather than the use of green screen. But she faced a tough time on set owing to the death of her grandmother just a month before shooting began, playing a character who is going through her own emotional turmoil.

But having had the chance to work with showrunners such as Hawley and Mr Robot’s Sam Esmail, who are both the singular creative architects of their series, has been a boon for Corneliussen in her fledgling acting career, which also includes appearances in superhero drama DC’s Legends of Tomorrow and crime-mystery Deception.

“They really are frontrunners in what’s going on right now in TV,” she says, describing her experiences with them as akin to painting alongside Monet. “Both of them are very open to giving their actors creative freedom because they trust their actors and they allow us to take the material to places we would like to go. They’re always open to suggestions.

“But it’s a fine balance,” the actor adds. “You’re working with two geniuses and you want to respect that they have put a lot of thought and effort and their own creativity into what they’ve done. So I like to stay in my lane when I’m an actor. I write myself and I would like to be a director too one day. But right here and now, I’m booked as an actor and that is what I like to do. That’s my job title and that’s what I should stick to.”