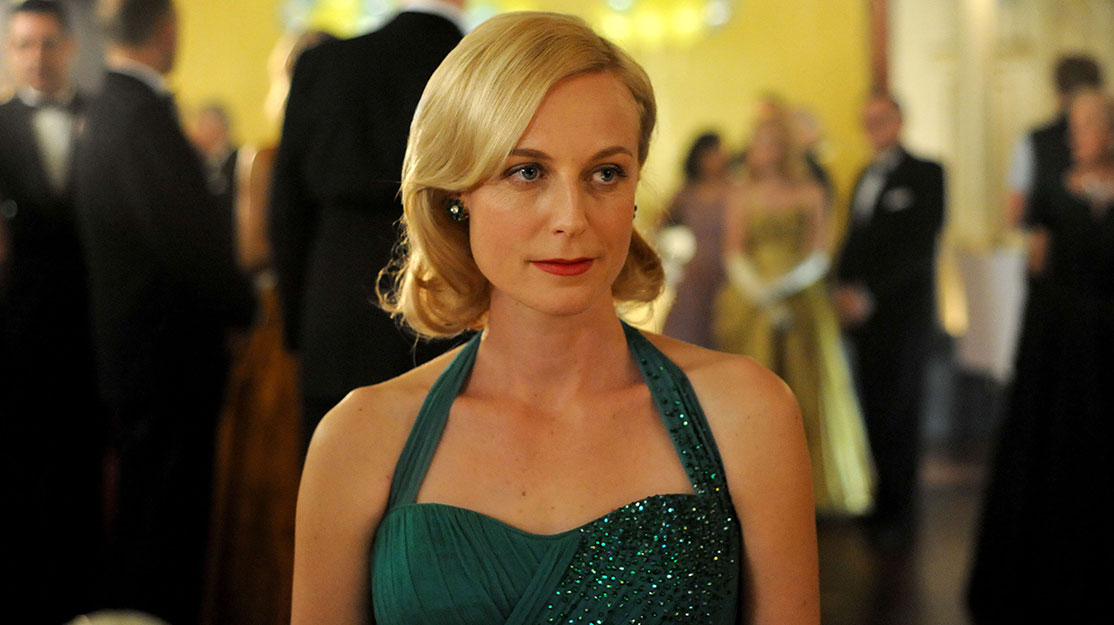 Australian actor Marta Dusseldorp talks to DQ about filming the final season of period drama A Place to Call Home, her returning roles in crime thriller Jack Irish and courtroom drama Janet King, and why she’s drawn to family dramas with a twist.

With a screen career spanning more than 25 years, Australian actor Marta Dusseldorp is one of the country’s biggest stars. Yet she recently said goodbye to one of her most iconic roles, with Foxtel series A Place to Call Home entering its final season.

Having starred as Sarah Adams in the 1950s-set period drama since it first aired in 2013, Dusseldorp and the show bow out with the sixth run, which began in Australia earlier this month and lands in the US on streamer Acorn TV tomorrow.

Created by Bevan Lee, A Place to Call Home is a sweeping romantic drama set in rural Australia, dealing with important social issues of the time: homosexuality, single motherhood, racism and the lingering effects of war. The final chapter of the saga brings love and healing to the central Bligh family as each member finds their true meaning in life.

“I have completely walked, lived and breathed this show for so long that Sarah and her journey is now a part of me,” Dusseldorp says. “When I first met her, she walked alone. She was a survivor of the Holocaust – that really defined her – and she was a nurse. Putting the two together meant she had no need for herself, she had abandoned that idea, and was purely into being able to help ease the suffering of others, bear witness to the people who had died and live an honourable life.

“Then throughout the series, she learned to love and lose and fight, and she became a mum and started being defined by people around her. When we met her, she was her own solo satellite – a moon – and she’s part of the solar system by the end. She’s actually totally intertwined and happily integrated into a family-type scenario. It was deeply satisfying to play.”

Dusseldorp recalls Lee revealing his vision for the show’s final scene back during season one, and describes the end of the series as being driven by both creative and commercial considerations.

“It was a conscious uncoupling. Evan felt it was finished creatively and Foxtel were so excited and happy with the way it had been. We lose a production offset after a certain number of hours, so the show suddenly becomes much more expensive, so it’s a business decision to finish as well. But, overwhelmingly, it was a creative decision. Bevan got to tell it completely as he saw it,” Dusseldorp explains.

“And I think it’s important, like a really good book, for it to end so you can finally put it down. You have to make room for other stories. It’s a wrench in the sense that I’m going to miss everyone and I’m going to miss going to work in the late 1950s, but it was right. And when you know it’s right, it doesn’t hurt as much.”

Touted as Australia’s best-loved drama, A Place to Call Home is produced by Seven Network (which aired the first two seasons before it moved to Foxtel) and has been sold around the world by Endemol Shine International. Dusseldorp says the show’s high production standards, coupled with its period setting, have made it irresistible to viewers.

“Even though we have a 10th of a US show’s budget, we manage to punch above our weight quite a bit. The heads of department go out of their way to make it look a million bucks, even though it costs half that,” she explains. “But I also think it’s not a negative show, it’s a positive show. It talks about hard issues but also has a joy and frivolity we all need. And the fact it’s resonated internationally is also really satisfying for everyone.

“Period drama helps you see how much you’ve changed and whether you need to change more. We’ve just gone through a referendum for allowing same-sex marriages. [Sexuality] was a massive part of A Place to Call Home, and we were making the show while it was happening. It was really exciting to be able to reflect that we had changed and people had fought and earned the right to love freely. It was like really being in the moment, which is awesome.”

Also an acclaimed theatre actor, Dusseldorp is currently treading the boards in A Doll’s House, Part 2 in Melbourne. And while she concedes it’s a “completely different” world from TV drama, Dusseldorp says she’s enjoying the chance to do something different after finishing A Place to Call Home and reprising two other long-running TV roles, as journalist Linda Hillier in noir thriller Jack Irish and the title character in legal drama Janet King.

“I just look for good writing, that’s pretty much it, and a clear vision because I am a storyteller,” she says when asked how she chooses her parts. “I’m kind of up for anything if I believe it, and part of my job is to make it believable. I’m also a big believer in the team, because I don’t want to ever walk in blind, thinking, ‘I hope this works.’ There has to be a creative conversation so it can be a collaboration.”

Based on the crime novels by Peter Temple, Jack Irish began life as a trio of TV movies on Australian public broadcaster the ABC, before two full seasons were commissioned. The most recent episodes launched on the pubcaster in July and will roll out on Acorn TV on September 10.

Though the characters have less to do with each other as the series continues, Dusseldorp says she has loved working with Pearce. “We had such great chemistry and he taught me a lot,” she says. The actor also has praise for one of the show’s writers, Andrew Knight (Rake, Hacksaw Ridge), who she describes as a “genius.” She continues: “His work is funny, silly, empathetic, non-sentimental – just thrilling and not what you would expect. So I go back to Jack to have those scenes because he always throws me to India or Manila. It’s a little bit crazy. I also try to test out a bit of my non-comic timing – I’m not very funny – because when it comes to Jack Irish, I take bigger risks because I know they’ll cut away from me if I’m terrible.”

Meanwhile, the most recent season of Janet King, itself a spin-off from 2011 legal drama Crownies, aired on the ABC in 2017. It sees Dusseldorp play a senior crown prosecutor, and has run to three seasons so far. The actor says she doesn’t feel “either way” about immediately returning to the drama, but says she would like to echo the Prime Suspect model that saw Helen Mirren reprise her role as police detective Jane Tennison in the British series sporadically across 15 years.

“I’m so happy to get old with Janet, and certainly that’s what I propose to do when it fits and it’s right,” she says. “When people are ready, I’m ready. But I am really looking forward to being in a space of nothing right now and seeing what happens. That includes working overseas. I’ve never done it; I really would love to stretch out. We’ll see.”

Reports down under had linked Dusseldorp with the leading role in a TV biopic of Catherine McGregor, a transgender campaigner, cricket commentator and former military officer. However, the actor reveals: “For whatever reason, that’s not going ahead.”

But having played three leading women in Sarah, Linda and Janet, Dusseldorp says she is fascinated to see what new shows come up, where they place women and in what age group: “I feel like I’m in the middle of that conversation [about strong female characters]. We can’t go backwards; it’s not going to happen.”

Now watching Amazon series Transparent for the first time and a self-proclaimed fan of US drama This Is Us, Dusseldorp says she loves family dramas with a particular twist, noting the latter is full of the “really intricate, delicate loopholes we go down as families that make us who we are.”

She adds: “I’m fascinated by that genre, and I’m also fascinated by the law, because of Janet. I’m very connected to justice and I’m really interested in domestic violence and why it’s this taboo no one talks about. A lot of it is very dark, but I just feel like if we don’t pull it up and put it in people’s faces, it’s quite easy to say that’s happening ‘over there.’

“There’s something in climate and what we’re doing to the earth that should be explored as well. I’m like a truffle pig, looking for the right story and trying to get people excited about that.”