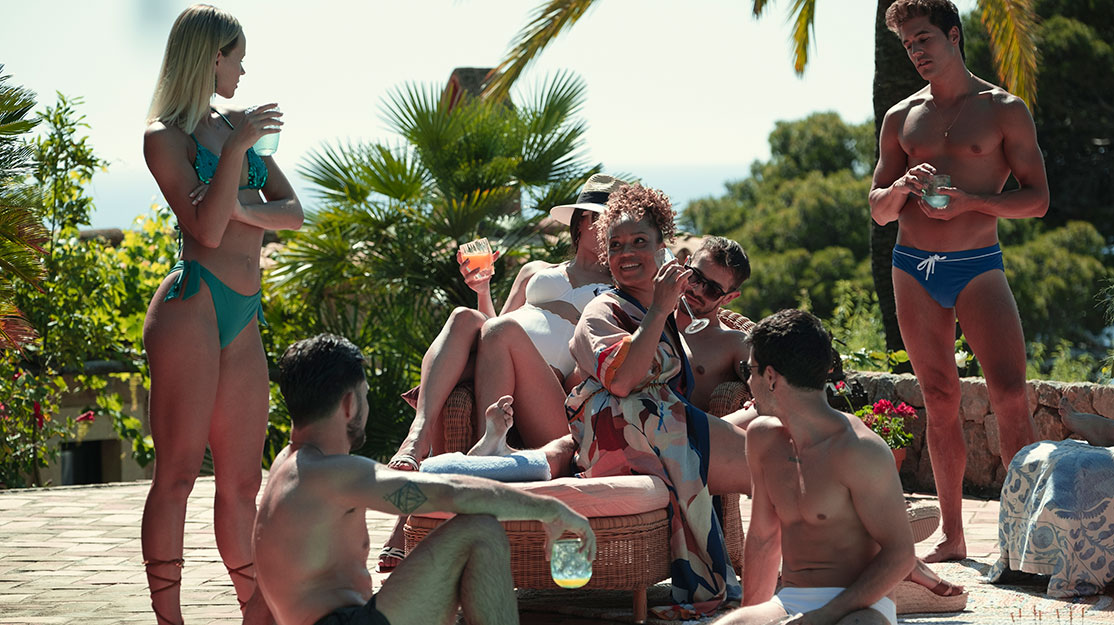 Despite TV production having been largely shut down in the UK amid the coronavirus pandemic, actor Angela Griffin has had a lot of work to do in recent weeks and months.

As well as starring in one episode of ITV’s Isolation Stories, which told four short stories about people isolated at home during the health crisis, Griffin is also part of the cast of Dun Breedin’, a YouTube comedy-drama created by fellow actor Julie Graham (Benidorm, Penance) that introduces a group of female friends at various stages of the menopause.

Unlike Isolation Stories, Dun Breedin’ isn’t set during the lockdown, but both series were filmed remotely over the last few weeks, with actors and their family members tasked with filming individual scenes at home.

When the body of a legendary Manchester DJ is discovered 20 years after his mysterious disappearance from Ibiza, his sister returns to the beautiful island to find out what happened. Her investigation leads her through a thrilling world of dance clubs, lies and cover-ups, forcing her to confront the darker sides of her own character in a place where people live life on the edge.

Produced by Left Bank Pictures (The Crown) and Pina’s Vancouver Media, it stars an eclectic cast of UK and Spanish talent, in a series that bounces between the English and Spanish languages.

Laura Haddock plays Zoe, who is looking for answers about the death if her brother Axel (Tom Rhys Harries). Also starring are Daniel Mays, Laurence Fox and Angela Griffin as Marcus, David and Anna respectively, Axel’s friends who stayed in Ibiza and now face uncomfortable questions from Zoe. Meanwhile, Marta Milans, Juan Diego Botto, Nuno Lopes, Pedro Casablanc and Belén López play members of the powerful Calafat family, who run many of Ibiza’s clubs, benefit from its illegal drug trade and own the land where Axel’s body was discovered.

As Anna, Griffin portrays one of the original foursome who went from Manchester to Ibiza in 1996. Anna also became romantically involved with Marcus, with the pair eventually marrying. “The friendship of the four was incredibly close,” Griffin tells DQ. “They were 20-year-olds who believed they could do anything, be anyone, go anywhere – and they did. Arriving in Ibiza in 1996, they completely and utterly rinsed it for everything they could, and Marcus and Anna stayed together, got married and had children.”

Twenty years later, as Zoe lands in Ibiza, the three remaining friends are all grown up but their lives have gone in different directions. David is now a spiritual leader, while Anna and Marcus have split up.

“Anna grew up and became a bit more sophisticated and refined. She’s got a business brain; she wanted more,” Griffin explains. “Marcus is still exactly the same person who walked onto the island in 1996. He’s still wearing the same kind of clothes, DJing at the same clubs, taking the same drugs and dealing the same drugs, and she grew out of him, so they divorced. But they’ve still got the children.

“Anna is a strange creature. On the outside, you would look at her and think, ‘She’s so lovely, warm and nice and seems to want to facilitate everything. She’s really helpful.’ But she doesn’t live with her children, they live with Marcus.

“She’s unapologetic about that. She’s not a mother who misses them all the time. She runs sex clubs; she runs very expensive, high-class sex parties. She’s a purveyor of pleasure and she absolutely loves it. She loves the fact everyone adores her. She wants everyone to adore her, including Marcus. Even though they’ve split up, she still keeps him on the end of a piece of string.

“So there’s an edge to Anna that you cannot quite put your finger on. That’s the same for a lot of characters Álex Pina creates. They’re always layered; there’s always something going on underneath. As you go from episodes one to 10, the characters all get stripped back and you find out who they really are and what they really want.”

While the first three episodes of the series lay the foundations of the central mystery, with flashbacks recounting some of Axel and the young friends’ early exploits, it’s clear that many of the characters are keeping secrets about what happened to him all those years ago. As revelations come to the surface, White Lines promises to be a rollercoaster ride typical of Pina, who continues to grip viewers into the fourth season of Money Heist.

“The Spanish way of writing, like La Casa, there’s a lot more passion there,” Griffin says of Pina’s scripts. “I don’t know if that’s a cultural thing, but the emotion is absolutely out there. I do feel with British writing it’s sometimes more reserved. With this, it’s there. It moves along, it’s so pacy. There are so many shocking moments, so many funny moments and moving moments. It was a real pleasure to work on. I do think Álex is a genius character creator – he manages to work through character but have incredible plots too. He’s very clever.”

Filming took place last summer in Ibiza, fellow Balearic island Majorca, and Madrid and Almería in mainland Spain. Griffin didn’t get to visit the real Ibiza, with the majority of her scenes shot in Madrid and Majorca.

“We shot a lot of the interiors in Madrid. Because Majorca and Ibiza are very busy, in July and August we moved to Madrid, as everyone there moves out because it’s so hot. All the locals take that time off. It was very interesting shooting in 40-degree heat,” says the actor, whose other credits include Canadian detective drama The Detail.

The international nature of the story and its cast means White Lines is likely to resonate with Netflix’s global audience, while Griffin describes the series as a multigenerational story that will appeal to viewers young and old.

“There are a lot of young characters and it’s very much about a debauched lifestyle. That’s always a hit on Netflix,” she says. “It skews quite young, so it appeals to them. But 1996 in Manchester, I was there. I did it, and I’m watching those [flashback] scenes with nostalgia. They’ve very cleverly appealed to a really wide age range with the fact we have got people from absolutely everywhere. We’ve got Spanish movie stars. So you’re appealing to a massive audience there.

“But it’s not as manipulative as that. Álex wrote a story he believed in and it happens to appeal to everyone. I don’t think you can plan that sometimes. Money Heist was made for Spanish TV and it’s just taken the world by storm. You just don’t know what’s going to hit.”

Thoughts of a potential second season are on hold while most countries around the world continue to pause filming until the pandemic subsides. But Griffin says Pina already has ideas of where the show could go.

“As long as the viewers enjoy it and demand it, hopefully when the world does whatever it’s doing, we’ll come out the other end and we’ll be in Madrid and Majorca shooting season two,” she adds.