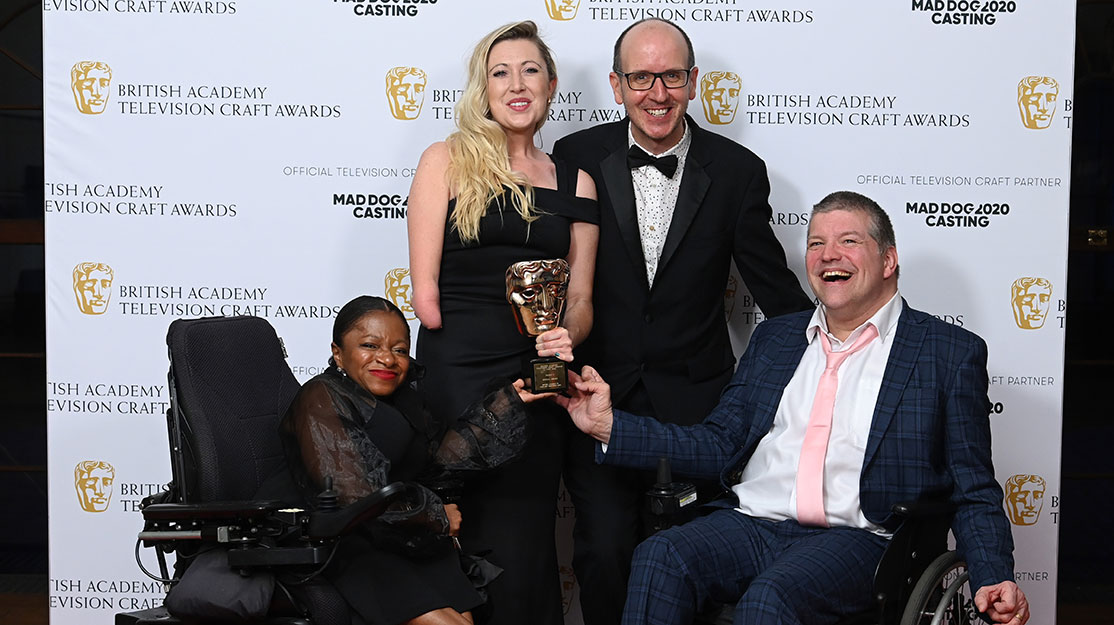 Bafta Craft Special Award recipient Triple C is driving change in the TV industry for deaf, disabled and neurodivergent creatives on both sides of the camera. Founder Cherylee Houston and artistic director Melissa Johns tell DQ how they got this far and what comes next.

Jack Thorne is no stranger to standing on stage at the Bafta Awards, having won five prizes and been nominated for a host of others for his work on shows including This is England, National Treasure and Help.

But when the writer appeared in front of the audience at this year’s Bafta Television Craft Awards,  it wasn’t to pick up his latest accolade. Instead, Thorne was presenting the final award of the evening – the Bafta Craft Special Award – to a groundbreaking organisation that is changing access to and opportunities in the industry for deaf, disabled and neurodivergent creatives.

Triple C, founded by actor Cherylee Houston (Coronation Street), was launched five years ago with a mission to improve representation of disabled people in every corner of the industry. It now runs workshops and masterclasses, and hosts a calendar of networking events through its Disabled Artists Networking Community (DANC), in a bid to give voice to many people who have often felt ignored or excluded.

“Disabled people have been left behind and excluded all their lives,” said Thorne, who rallied against TV’s prejudice against disabled people with his 2021 MacTaggart Lecture at the Edinburgh Television Festival. “What Triple C do is they don’t demand a few people are heard, they demand an entire collective is. Triple C are incredible and the revolution they have led is only just getting started, and they have made it happen with little or no support. I hope what this special Bafta means is the industry is declaring they will be treasured from now on because they deserve to be treasured.”

The power of Thorne’s words, and the subsequent acceptance speeches from Triple C’s Laurence Clark, Melissa Johns and Monique Jarrett, were impossible to ignore, while the impact Triple C has had is undeniable.

Before the pandemic, it had 450 members. But that number has rocketed to approximately 1,300 after the group quickly moved its activities online during the first UK lockdown, going on to deliver more than 300 workshops and webinars over the past two years. More events are now planned, while there are around 30 ambassadors who have signed up to help push the organisation forward.

Speaking to DQ after the awards ceremony, Houston and Triple C artistic director Johns (The Interceptor, Life) discussed their philosophy to “catch every ball” and take up every opportunity they can to ensure no one is left behind.

According to Johns, there has been an “unbelievable” change in attitudes over the past 18 months, “where it has felt less like we are banging on the doors and now people are coming to us.”

“This award has really cemented our place in the industry,” she added. “Don’t get me wrong, we are still knocking on a lot of doors, but a lot more of them are being opened for us and a lot more organisations are coming to us. This has elevated that status even more.”

After leaving drama school, Houston spent five years putting on her own shows “because nobody employed disabled actors.” She then ran a company that hosted audition technique workshops, put on shows and encouraged youth theatres to work with more disabled young people.

It was when Houston was working at ITV that she met Johns and set up Triple C, visiting schools and doubling down on audition masterclasses based on the principle that disabled people didn’t get many auditions. Together they then established DANC, which drew 60 people from across the country to its first event.

“We didn’t know what was going to happen or who was going to turn up,” said Houston. But events hosted by DANC have subsequently offered opportunities for disabled creatives and industry professionals alike to meet and build relationships that Johns and Houston say will prove to be the first steps towards future collaborations.

“Then there’s also conversations about how to break down some of the blocks that exist,” Houston said. “We listen to what the industry says, the industry listens to what the artists say and we come up with what the next-step solutions could be. Since March 2020, we’ve been running a couple of webinars and two masterclasses a week, and that gives writers, directors, actors, commissioners and production companies an introduction to the DANC community and gives the DANC community the chance to ask questions and follow up afterwards on their own. We’ve also had a lot of writers who haven’t had opportunities to pitch their writing, so we’ve set up a series of ‘how to pitch’ workshops.”

The writers initiative programme has been particularly successful, with between 150 and 200 disabled writers at different stages of their career now part of the community. This has led to the creation of some writers room guidelines, outlining some of the obstacles disabled writers have faced and what the solutions may be. A similar initiative is underway to establish access coordinators to support deaf, disabled and neurodivergent people on every production set.

“As we all know, sets are so busy. Look at every single job role of anyone who works on set and the list of responsibilities is already huge. Add in the fear of a disability, which we know very much exists, and no wonder we’re not being seen on set,” Johns said. “It makes complete sense that you would have somebody who looks after access, with the idea that you don’t wait for somebody to come forward to say, ‘I’m disabled, I need this.’”

Houston, a wheelchair user, recalled a time when she had to audition in London’s Leicester Square because she couldn’t access the correct building. Another time, she had to use the toilets as a makeshift green room because the actual green room wasn’t accessible.

“If you go into a production where nobody’s disabled or nobody really understands how to ask for the access because of that fear, it means you become the educator and you have to advocate for yourself,” Houston noted. “But that means your brain is taken away from doing your job. If somebody is there doing that job for you, it just means you’ll be there to do your best work. People in the industry really want to embrace it, but some people are startled by the fear of getting it wrong because it’s an absolute minefield. We don’t know all the answers as disabled people, so how on earth can somebody who is non-disabled?”

Thanks to the work of organisations like Triple C, representation of disabled people is slowly improving after a generation of people grew up without seeing people like themselves on screen. When Johns left drama school, she didn’t have the same fight for auditions Houston endured. “But the reason I was there was very obvious and very discomforting. I knew I was there to film a story that wasn’t true,” she said.

On one job, she found out several of her scenes had been cut, leaving just those that focused on her disability. Johns is now part of the next generation pushing for more truthful representation of disability.

“In the last few years, that has started to change,” she said. “What’s great is people do come to us now and say, ‘This is what we’ve written,’ or, ‘This is what the idea is. What do you think?’ Suddenly, we have the opportunity to gather together the right people, the right deaf, disabled and neurodivergent creatives, and we’ll be able to let you know what isn’t quite right about that and maybe what you can do to change it. We’re absolutely moving into a place now where a truthful representation, rather than just representation, is really starting to be heard and be seen.”

“Quite often, our industry unfortunately has played a lot of stereotypes badly,” Houston added. “When you have somebody who’s non-disabled play a disabled character, they still play that subconscious subtext of, ‘Wouldn’t it be awful to be me being disabled?’ That really doesn’t help our community because all of us are pretty much over being disabled.”

After winning the Bafta Craft Special Award, Houston and Johns both want to continue growing the Triple C membership with the aim of continuing to build relationships within the production community – until the day they are no longer needed. Until then, they also plan to continue training schemes, masterclasses and championing greater accessibility.

“Ideally it’d be great if DANC didn’t exist in 10 years’ time, and then we can move into making our own entirely disabled-led produced stuff,” Houston said. “The dream is not to need to exist so we can all get on with being creatives.”